The idea that a J. Michael Straczynski comic — any J. Michael Straczynski comic — could add emotional depth to an Alan Moore comic feels like the punchline to some joke that can’t really exist, and yet… Before Watchmen: Nite Owl kind of does that very thing, as unlikely as that seems, with a story that on almost every single level embraces and hews to every expectation and cliche that you could imagine. How did that happen?

For those who don’t know, Nite Owl rests on a simple (and, yes, kind of obvious) idea: Inspired by the scene in Watchmen where Laurie finds the photo of the Twilight Lady, and Dan brushes it off as a gift from a villain who “had sort of a fixation. She was a very sick woman,” Straczynski decides that, no, Dan was obviously lying, and there’s a relationship there he doesn’t want to talk about. That relationship — a love affair where the Twilight Lady eventually leaves, because she “can’t afford” to be in love (I told you it was cliched) — is at the heart of a story that, in all other ways, is a mess of plot elements and character moments that fail to come together or seem in any way organic, but unlike everything else in the book, it kind of works. 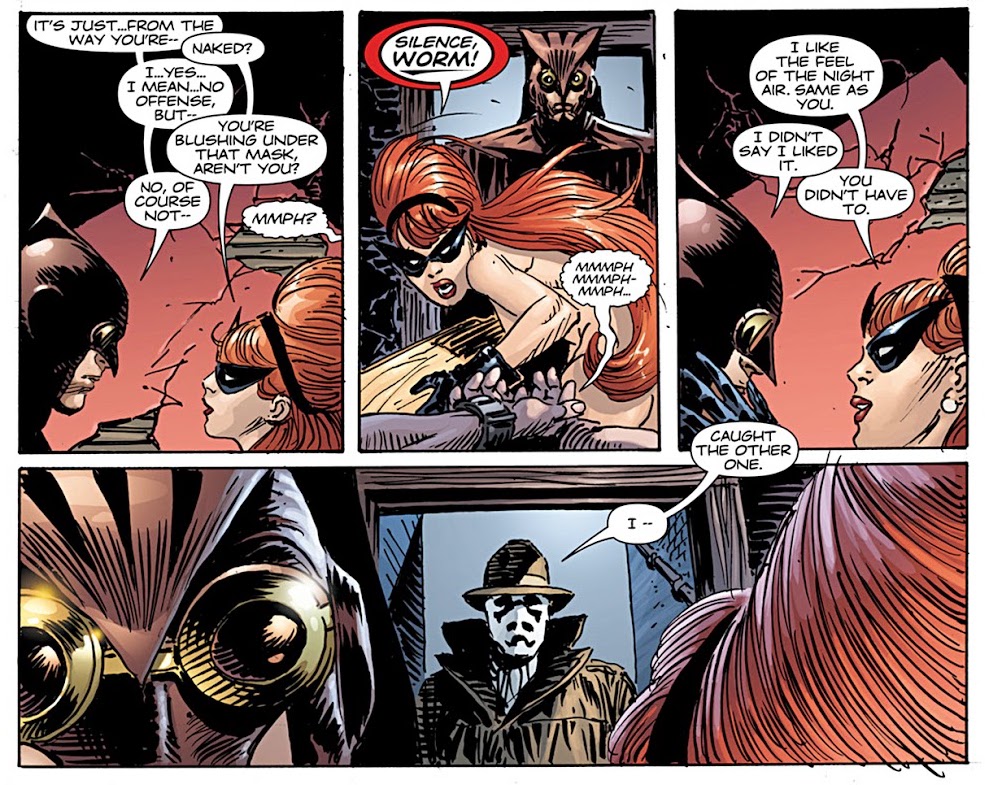 And in (kind of) working, it adds something to that Watchmen scene, and also — for me, at least — to Dan’s relationship with Laurie, offering potential explanations, or at least the beginnings of same, for quite why he’s so passive with and possessive of her. It actually, surprisingly, unbelievably, adds to the original book in a way that I would never have expected. The rest of the book, however, fails to do anything of the sort.

It’s clear from Nite Owl, and even the far more troubling Dr. Manhattan series, that Stracyznski has studied his Watchmen; he’s memorized the dialogue, he knows the plot and he can probably tell you the page number where Nostalgia is first mentioned and in what context. Unfortunately, that devotion to the original smothers his writing here, and I say that as someone who finds JMS to be an artificial, mechanical writer at the best of times. So you end up getting everything you’d expect from a Watchmen fan (The first meeting between Dan and Mason! The first meeting between Dan and Laurie! Nite Owl and Rorschach fighting crime together in their prime!), but in a way that makes you realize that you didn’t actually want to see any of that, because the versions in your imagination were far better. Consider it a metaphor for all of Before Watchmen as a whole, perhaps. 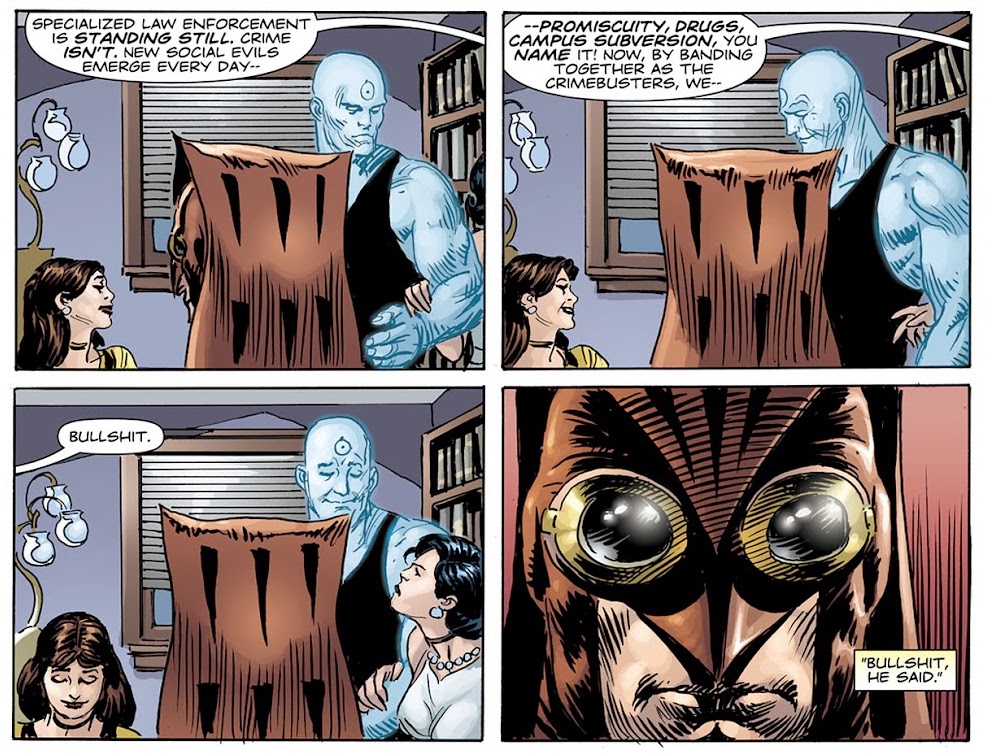 There are, of course, moments of particular shame: The sheer fucking laziness of using the “He’s a religious leader who turns out to be a crazy pervert serial killer” plot, for one thing — never forget that Straczynski wrote for Murder She Wrote, I guess — which is even stranger considering that the Twilight Lady is herself a sex worker and presented in such a way that both echoes Straczynski’s prostitute character from Superman: Earth One and makes me genuinely curious what his fascination is with sex workers as characters (I think he’s so close to doing something interesting and de-stigmatizing sex workers, but he can’t quite bring himself to entirely drop the salaciousness. Maybe one day…). Is Straczynski a prude, or commenting on prudishness?

And even worse, of all the things for the Nite Owl series to include, there’s also the origin of Rorschach’s “The End Is Nigh” sign, which… Well, really; maybe this is the ideal metaphor for Before Watchmen as a whole. In what world did that seem like anything approaching a good idea? Spoilers: Rorschach rescues it from a fire in the church where the pervert priest was keeping lots of corpses, because of course he did.

I’ve made it this far without talking about the art, which perhaps speaks to its importance to the overall book. Andy Kubert’s pencils are exactly what you’d expect from him, to be blunt; they do the job, but he doesn’t really deliver the talking heads and slow action that the script demands of him with any particular style or the excessive formalist detail that you might expect from a Watchmen-related work. (Surprisingly, Straczynski doesn’t seem to write that into this script.)

By far the most interesting thing about the way the book looks comes from its inks. For half of the series, they come from Joe Kubert, whose looseness with the brush brings an air and space to the artwork that Andy Kubert’s work generally lacks. Unfortunately, Joe died midway through the series, and the rest of the inks come from Bill Sienkiewicz, who provides a genuinely odd job: perhaps out of a desire to provide something resembling visual continuity, it’s the least Sienkiewicz-y inking job I’ve seen, but he remains a tighter, sketchier inker than Joe K, meaning that everything becomes noticeably more… anxious and uptight. It’s a strange combination, and not an altogether successful one.

Nite Owl, then, isn’t something I’d recommend to anyone other than a Watchmen or Straczynski completist, or someone like me wondering just where the JMS/Sex Worker thing is actually going, and whether it’s a good thing or not. But, I promise, despite that: the Twilight Lady/Nite Owl relationship does kind of work. It’s the one saving grace of the whole thing, and it really did, for me, add something to the original book.

2 comments on “Wait, Watchmen 6: Who Knows What Evil Lurks”