For my birthday a few weeks back, I had a couple of beers and then went longbox diving for random things I vaguely remember that are not available digitally, not least because I could then write posts about them here. This is one of those things. A formatting note on this specific book: this was a beaten up, yellowed version of the original trade paperback with pages coming loose, so I was loath to try to wedge it into my scanner. As a result, the images below are pics taken by hand with my phone, with some attempted color-balancing by me after the fact to decrease the yellowing and kill the glare. I apologize to literally every human being involved in the creation of this book for the resulting butchery.

THE BOOK:  Machine Man TPB, collecting a four-issue limited series published by Marvel Comics in 1984-1985 (which STUNNED me–I hadn’t looked at the date before sitting down to write this, and I would’ve bet cash money on 1986 or 1987).

THE CREATORS: Written by Tom DeFalco; layouts on #1-3 by Herb Trimpe; finishes on #1-3, plot and art on #4, and colors throughout by the mighty Barry Windsor-Smith.

THE CONCEPT: In 1980, Tom Defalco wrote the last few issues of the original Machine Man book (following Marv Wolfman’s departure) with art by Steve Ditko, capping off a series that started with nine issues of Jack Kirby. I have never read those issues, but I assume this was some kind of a triumphant return to the character–only this time spun into the unfathomably far-off future year of 2020. Annnnnnnnnnnnnnd that’s the high concept: Machine Man wakes up in 2020, where he has some adventures. The end. (“Alternate history Flash is paralyzed saving JFK and becomes an archaeologist on Mars” this is not.) Or maybe the high-concept is just “Go to it, Barry Windsor-Smith.” I dunno. 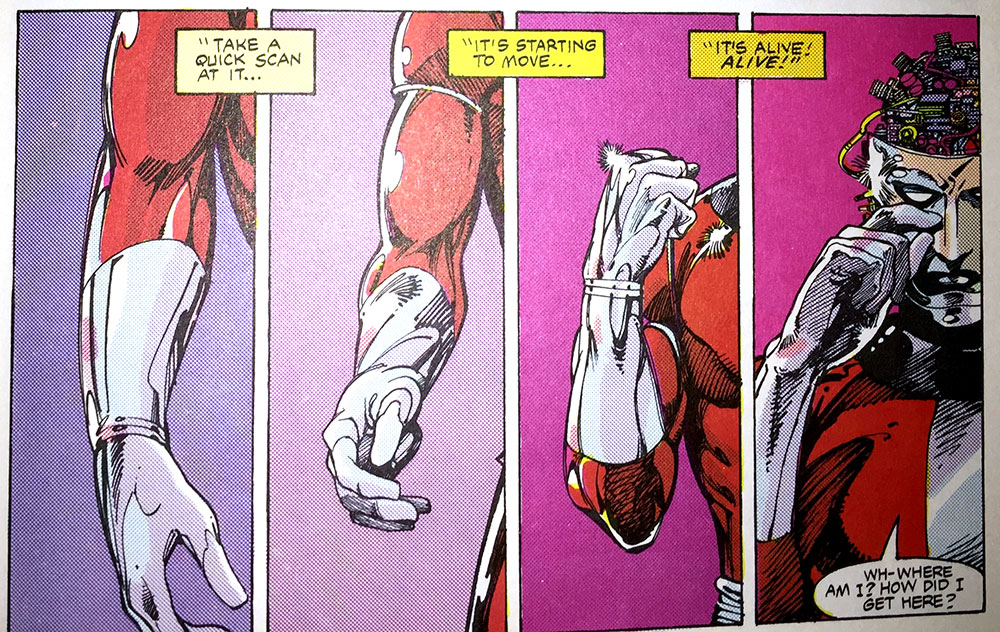 I had never read this series (that I recall), and I came to this collection with some serious preconceptions about all the creators involved:

Barry Windsor-Smith was, to me, a Special artist. Not just that his work had a unique quality to it (although it certainly did), but that he was the kind of big gun who was brought in to draw Very Special Issues of comics. Just off the top of my head: The two Lifedeath stories in X-Men; the Wolverine solo against Lady Deathstrike issue in Uncanny X-Men #205; the dream sequence issue of Iron Man that serves as an epilogue to the Armor Wars storyline (#232), and the capstone to a two-year long slow burn plot after Tony Stark is shot in the chest in issue #243; later on, the Weapon X storyline in Marvel Comics Presents, finally giving some of Wolverine’s long-hidden backstory. Those are the things I associate him with, not his earlier, more workmanlike jobs pre-1980 or so. He was not a guy you’d expect to find if you picked up a random issue of Nth Man or whatever. So his presence here meant that this book was, by tautology, Very Special. On the other hand….

The late Herb Trimpe is among the most workmanlike Marvel artists of my childhood. If there’s a book that I enjoyed but have no specific visual memory of, odds are good that it was drawn by Trimpe or Al Milgrom. His presence was a direct counterbalance to Windsor-Smith’s, in my mind.

And Tom DeFalco … I have two very distinct mental images of Tom DeFalco, neither particularly flattering. The first is my childhood image of him, gleaned from his editorials and the caricature of him on the Bullpen Bulletins page: a classic New York stereotype, portly and bearded and brash, with a cigar. He wrote a lot of comics that I read and enjoyed as a kid, and very few that I have any distinct memory of. The second mental image comes from much later–1999 or so. I was at a convention with my then-girlfriend, and DeFalco was shilling for some book he was doing, which he patronizingly assured us that “even girls could enjoy”. He was smaller than he’d seemed in caricature, and somehow grubbier; the whole experience left a bad taste in my mouth that almost certainly retroactively influenced my opinion on his comics.

So with one major pro, one neutral-leaning-negative, and one severe negative preconception, I was pretty shocked by how much I enjoyed this comic. 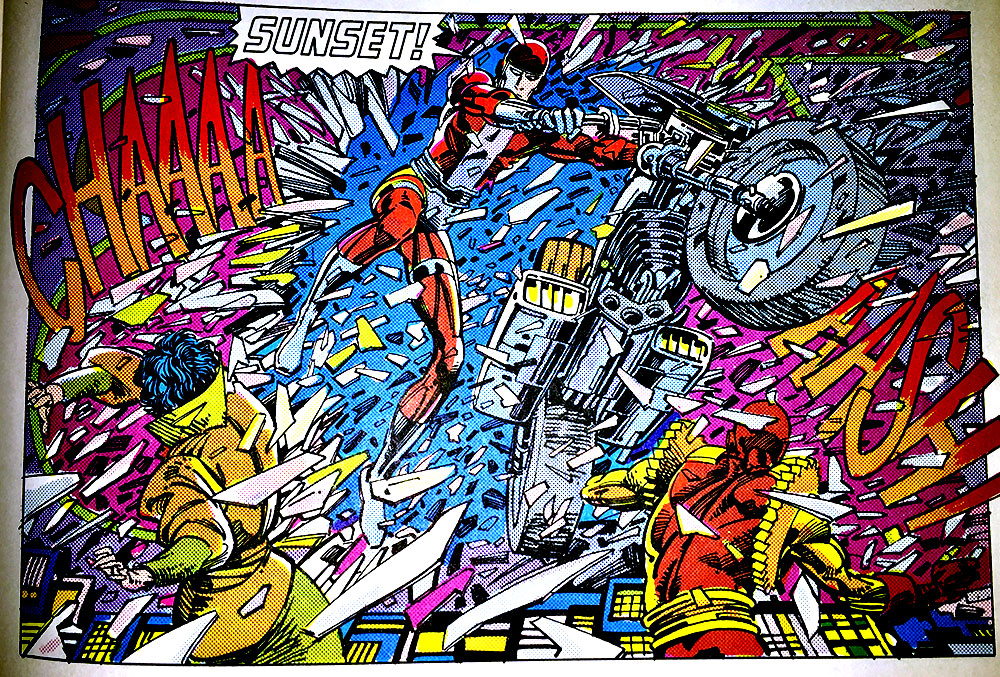 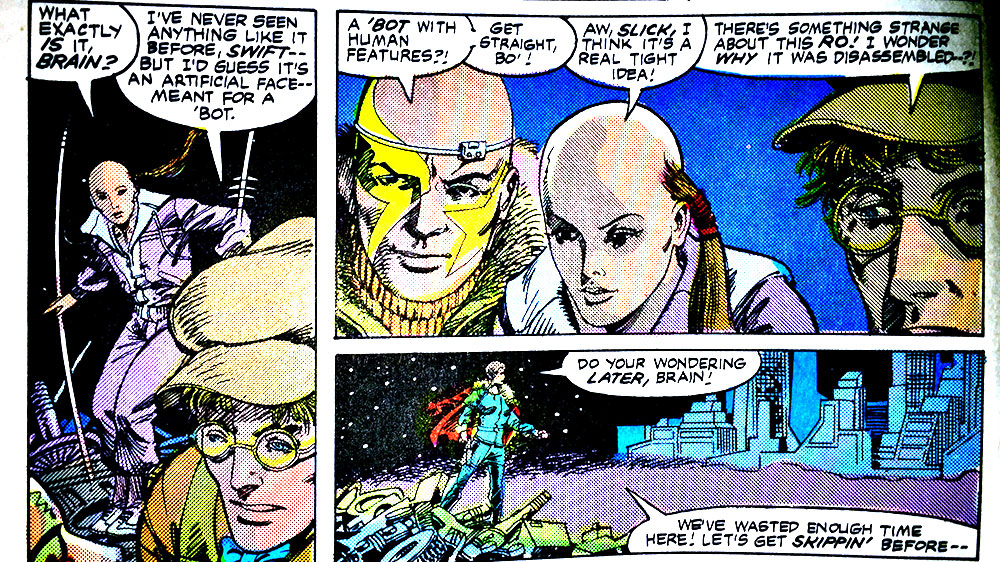 SHOULD IT BE ONLINE: ABSOLUTELY. Barry Windsor-Smith didn’t do all that much work for Marvel in this style, and this should be more readily available for that reason alone. Even beyond that, it’s a fun look-at-the-past-looking-at-the-future book, and would certainly be worth four bucks on a Comixology sale or 30 minutes of your time on Marvel Unlimited.