Obviously, I’ve become hooked on embedding YouTube clips in our browser.  Dunno why, and I think it’s arguable that it’s more than a little insulting to put video in a comics podcast blog but…eh.  I’m sure it’s a phase I’ll grow out of.

Anyway, welcome from the far-flung past!  This is being posted from the road as the missus and I find ourselves on the rocky shoals of uncertainty  (not the most beguiling name, but it’s hard to beat the hotel rates) for a few days.  (And yes, that means no recording this week so no podcast next week but Graeme and I promise to make it up to you. We really, really do.)

So, let’s jump in with those show notes, shall we?  Please note that: (a) this was recorded the evening *before* DC broke the Internet with its list of new titles and new creative teams so…if you’re hoping to hear our reactions to that news, you’re kind of out of luck?, and (b) if you want to have a player-free link to this episode, and you don’t like iTunes, or our RSS feed, or Stitcher, then go to the first comment and copy and paste it.  I realized Graeme did a kind of neat thing with the first ep. of Baxter Building where he just linked to the dang episode.  Was that a thing you guys liked?  Should I start doing that?  Please let us know until we muster the time, resources, and wherewithal to handle The WordPress Podcasting Template Nobody Likes.

00:00-22:27: Greetings from Plague Central! Graeme has a very congested update about Portland being “Lurgy Town.” We hope you like listening to discussions about illness, hypochondria, Graeme’s health care, and Jeff’s very apparent worry that he is the latter. Believe it or not, this very long non-comics discussion pays off later. Comics talk more or less enters the equation with a discussion of “Little Annie Fanny” around the 16:28 mark.

To be fair to Kurtzman & Elder, there were a few stunning pages I passed up due to size consideration…

22:27-25:41: As Graeme puts it, “To sum up: I’m sick; Jeff’s going on a trip next week.” So consider yourself officially warned that next week will be a skip week, and that although Graeme qualifies for the “Hefner,” Jeff will be lucky if he can get covered under the “Guccione.” Which is finally, somehow, the proper transition to discuss…
25:41-29:18: COMICS! First up: Locke & Key! Graeme’s read it, Jeff hasn’t, so of course guess who monopolizes the conversation about it? (Hint: it’s not Graeme.) 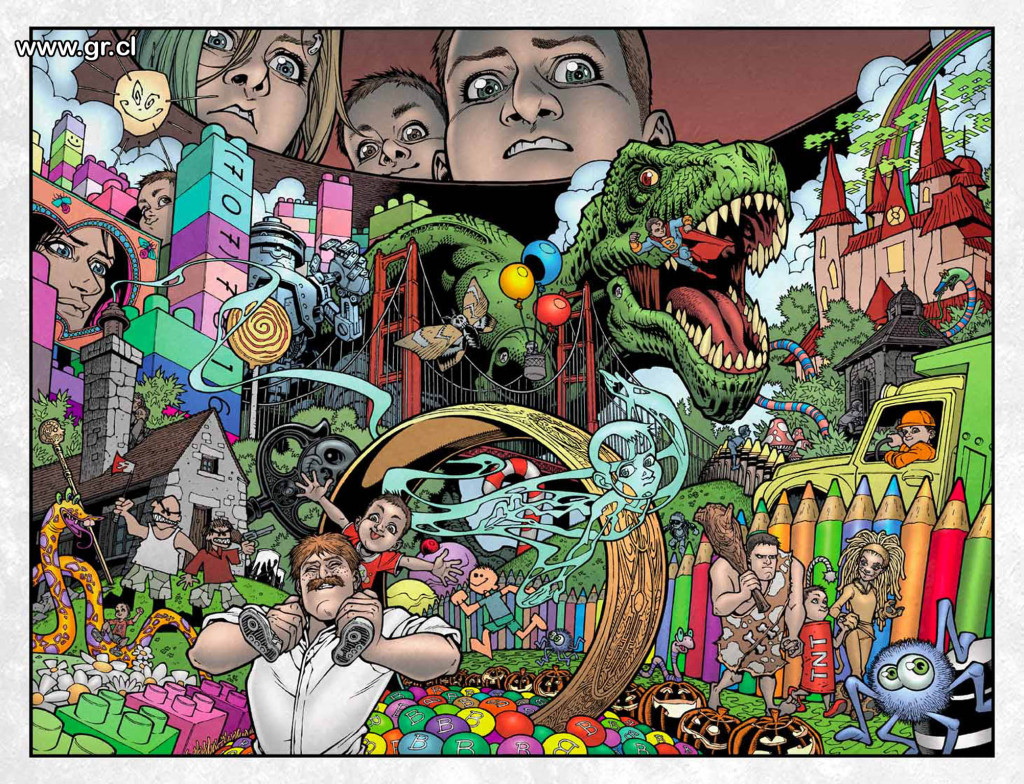 Pretty, right? Clearly, Graeme is on to something…

29:18-42:26: And then, that silliness, out of the way, we both get to talk about Nameless #1 by Grant Morrison, Chris Burnham and Nathan Fairbairn, and also how we think Morrison is in full-on personal renaissance mode what with his work also on Multiversity and Annihilator. 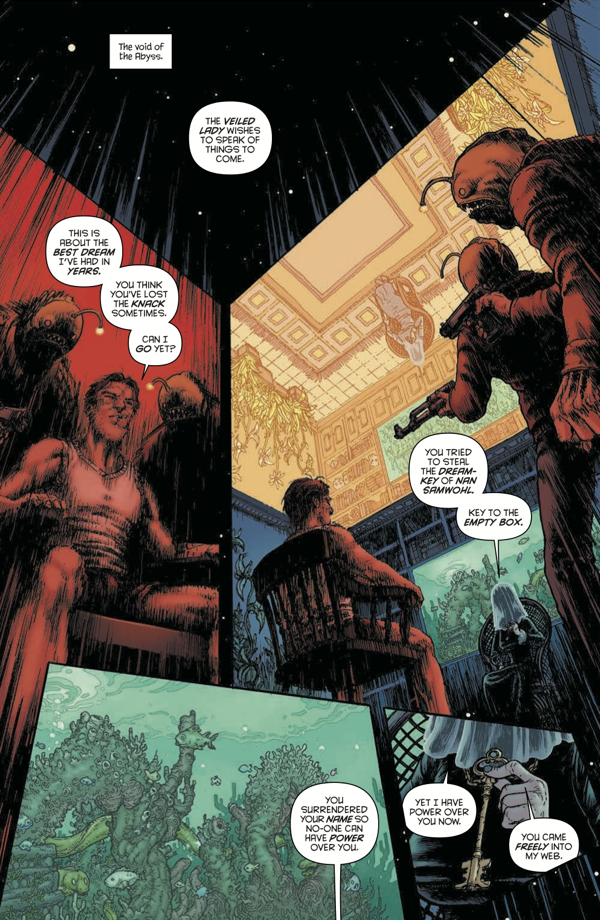 Yup, I reused the image from Graeme’s review…

Jeff references a post by Marc Singer that most definitely does not agree. But although we dive into that more later, this section is very much our appreciation for this very strong first issue that is strangely joyful, and far less forced than Morrison’s earlier similar-in-some-ways, dissimilar-in-many-other-ways Happy. Jeff also thinks if you liked Nameless #1, you should check out the excellent words-without-pictures book Love Is the Law 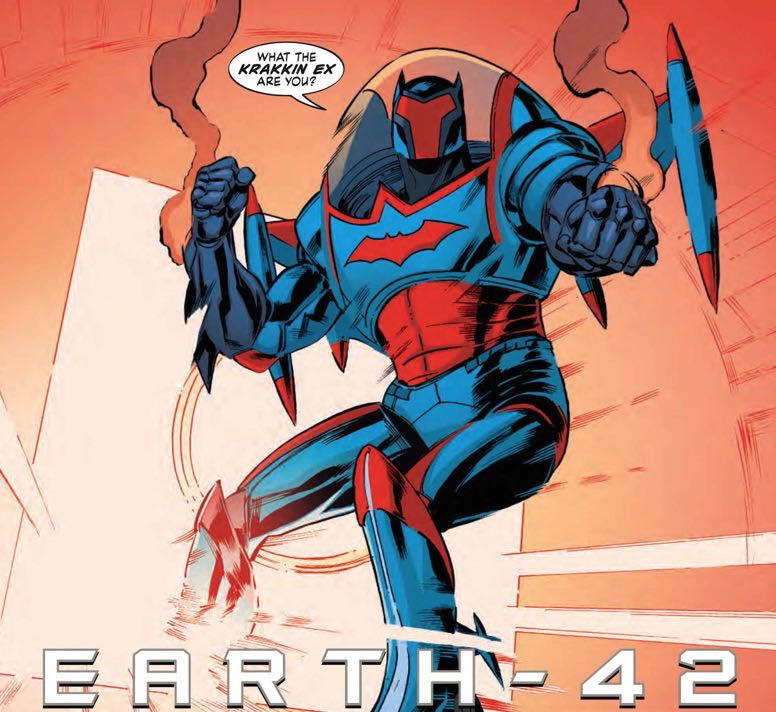 Really, there’s no topping the phrase “Krakkin Ex,” is there?

42:26-1:09:10:  As mentioned above, The Multiversity Guidebook! by Grant Morrison, and a slew of artists including great stuff by Marcus To (Chibi and Atomic Batman!) and Paulo Siqueira (Earth Kirby!).  We talk about their great work briefly, but we also have ideas about the Empty Hand and what it means, both in-story and most especially thematically? We try to dig in deep about what we think it all means and how we think it’s all going to end. 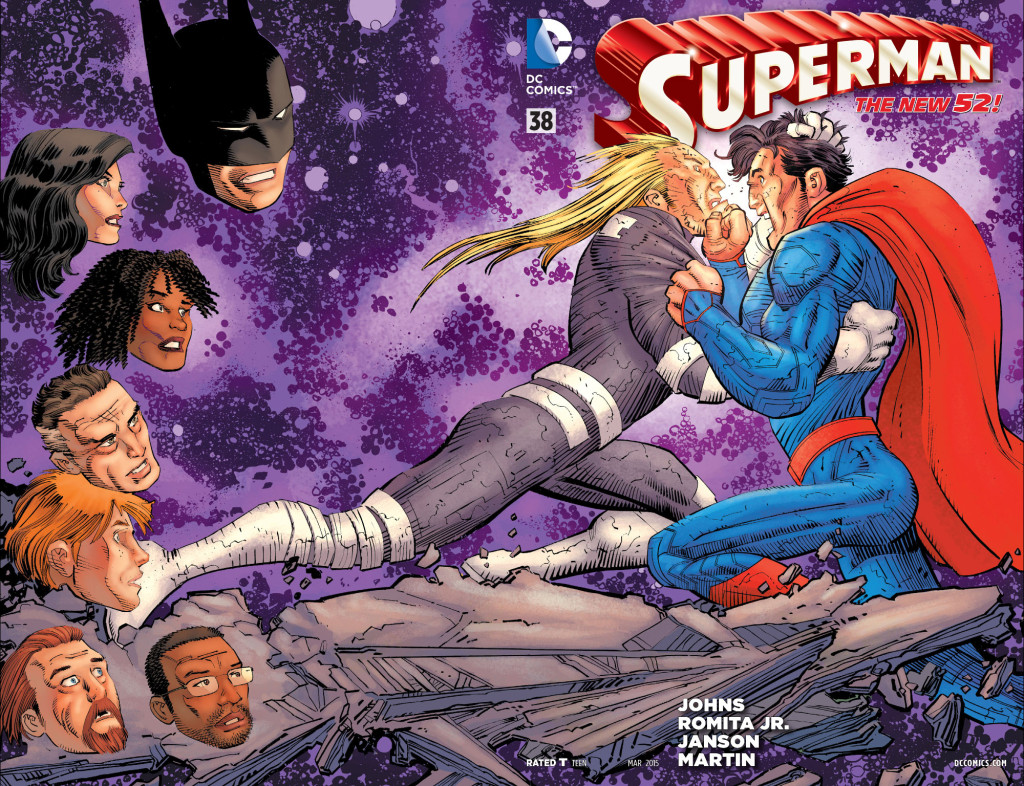 1:09:10-1:26:49: You’d think there’d be a modern-rock band called Ridiculous, wouldn’t you?  So that DJs on boring radio stations could go, “And now, moving from Ridiculous to Sublime…”? Like, wouldn’t you get at least some kind of sustained royalties out of that considering the fact that radio stations still play Sublime songs for some insane reason?  Anyway, we went from talking about The Multiversity Guidebook to Superman #38 by Geoff Johns and John Romita, Jr. so maybe you can figure out where my head was at to start thinking about things ridiculous and sublime.
NOTE:  Full spoilers for Superman #38, in case you’re worried about that kind of thing.
HISTORICAL NOTE:  this podcast wrapped a mere hour before Geoff Johns announced he was leaving Superman with issue #39, which I think would’ve greatly changed the tenor of our conversation (well, it certainly would’ve changed Jeff’s point of view) but, eh, what can you do?  Also, I’m sure you’ve seen the list of all the new teams and titles coming from DC.  THAT got announced a mere twelve hours after we recorded.  So yeah, we’re pretty much a charming historical document already…albeit one that discusses Superman’s new power, Jimmy Olsen’s new role, and much more. I only wish we could’ve talked about how exciting the possibility of Gene Yang writing Superman is. Discussed instead: the “superhero vs. his clothes” trope; Scott Lobdell stories; Futures End vs. Earth 2: World’s End vs. Batman Eternal vs. the DC All Access page about Batman Eternal; and more. 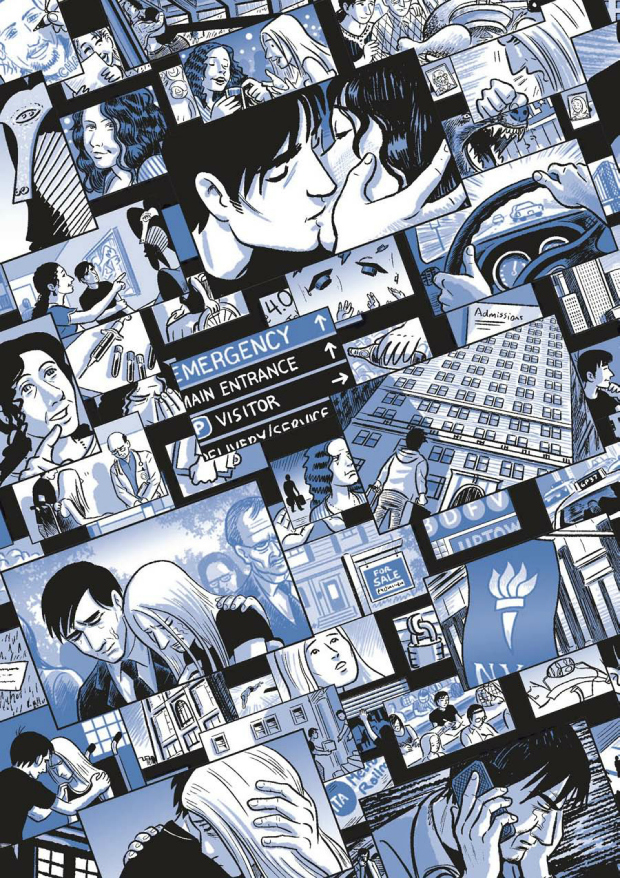 And then, much arguing between Graeme and Jeff ensued….

1:26:49-2:05:55:  FEINT! Jeff was supposed to run down a list of comics he’s read recently, but instead steers discussion to Scott McCloud’s The Sculptor, out now and available from First Second.

Also discussed:  the mastery of Understanding Comics; the misfiring of Reinventing Comics, and the mystery of Making Comics (well, partial mystery in that Jeff hasn’t read it but Graeme has), the P.R. blitz around The Sculptor, and finally a very long discussion about the book, including Jeff and Graeme arguing about just about everything, related to the book, despite having very similar takes. Yayyyyy!
2:05:55-end: Closing comments! Here’s our schedule! Graeme makes promises about our upcoming episodes!  Mason & Tote Bags! Places to look for us at—Stitcher! Itunes! Twitter! Tumblr! and, of course, on Patreon where, as of this count, 94 patrons make this whole thing possible.
So, there you have it, yeah?  Check out the first comment if you need that link, go back to Ep. 167 and listen to enter and win our Rogue Trooper contest, and thank you for listening!  We shall return in two weeks with the next ep. of Baxter Building (listen to our first episode if you haven’t, or read issues #13-24 along with us), and then more Waiting and Whating than you can shake a longbox at!