What’s that, you say? You were looking forward to Baxter Building, our in-depth look at the first 416-issue of Marvel’s Fantastic Four? We’ll see if you’re still saying that after this uber-sized first episode, in which we talk about the series’ first 12 issues. I remember saying to Jeff “I really want to go deep on the first 12, because the series changes so much during that time.” Little did I know that we’d go quite so deep…! Shownotes below, and for those who want their choice to listen elsewhere, you can find this episode on Stitcher and iTunes. Please be kind. It’s our first time. 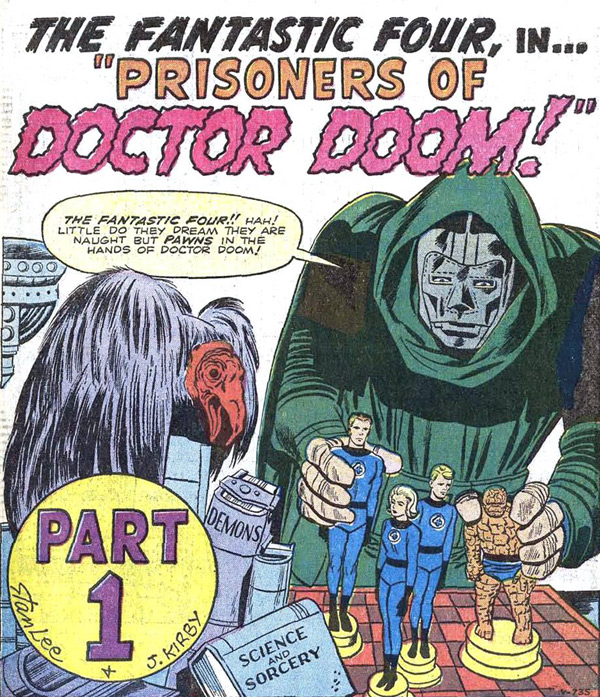 Jeff (left) and I (right) plan the first episode of the series.

0:00:00-0:02:27: The origin of the theme music and the title for the podcast. Literally, we were making this up as we were going along, in case it’s not obvious. “People, you’re getting to hear the origins right now,” as I say in the episode itself.
0:02:27-0:05:27: For any newcomers, Jeff and I run down just what we’re reading, and how to read along. (This would probably be a good place to put a link to Marvel Unlimited, considering we mention it for those who’re looking for ways to read along with us.)

Sue Storm fails to realize that actually being visible when in cabs might make her life a lot easier.

0:05:27-0:24:40: The first issue, and the many ways in which it seems unlike the team as we know them today — including the literalness of the the original Fantastic Four flare, Sue Storm’s bad choices when it comes to transportation, the familiarity to both monster comics and Kirby’s own Challengers of the Unknown, the importance of the Human Torch in the early issues, and much, much more. (Also discussed: Stan Lee’s inability to understand science, the early pacing issues and possible reasons for that, and the disconnect between image and text in that first issue. Not to mention, what’s missing from the first issue: Stan Lee being Stan Lee.)
0:24:40-0:28:00: “The first issue is scary!” The ways in which the first Fantastic Four hints at later superhero comics, by making superheroes something just a little less terrifying by the monsters they fight. Is there a Lovecraft connection with the book’s title?
0:28:01-0:33:55: The wonderful fake-out of the opening of Fantastic Four #2, and why it’s a trick that could only work once — and at this particular point in the series. Also, why do the Fantastic Four have so many hiding places, and in what ways is this issue like Lee and Kirby’s Hulk? 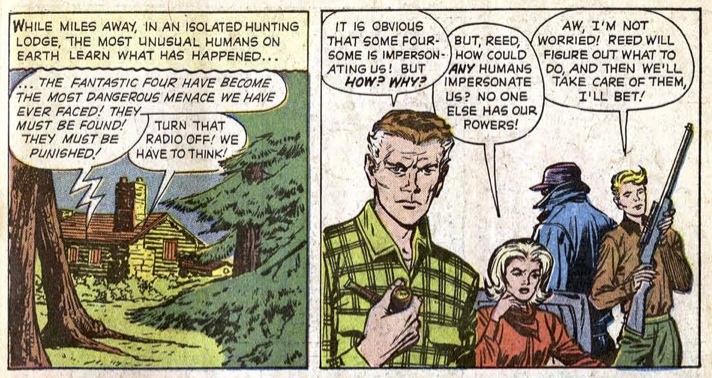 Johnny, get your gun.

0:33:55-0:39:10: The first element of Lee and Kirby being meta-textual. It won’t be the last. Also, even more problems with the pacing and potential plot problems, because apparently no-one was really paying attention to what was happening in with the story of these first issues until it was too late. 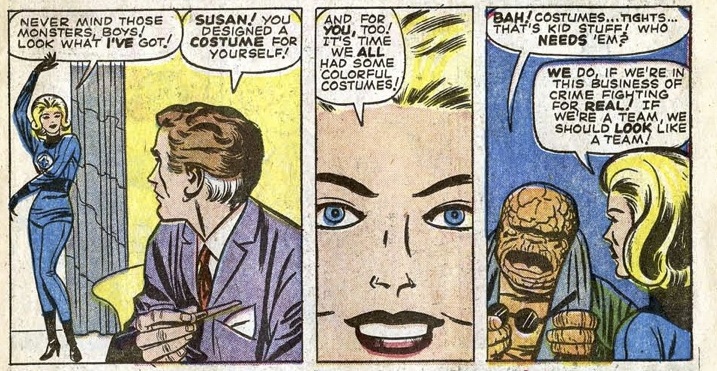 0:39:10-0:48:00: Fantastic Four suddenly embraces the superhero-ness of it all, starting with the third issue. Jeff also brings out the importance of the urban nature of the stories, and the way in which the Fantastic Four have been part of the city, while I suggest that things are starting to change even by this issue. Also: the first appearance of the Baxter Building! The first appearance of the Fantasti-Car and the Fantastic Four costumes, and how off-handed it all seems! Are Lee and Kirby having their cake and eating it by making a big deal of the “new” Fantastic Four even as they have the characters make fun of them? Plus! Who is Jeff’s breakout character of the series to date? The answer will surprise you (because, seriously, who’s ever given this character a second thought before now?)
0:48:00-0:53:10: Referencing Fantastic Four (1961-89) was The Great American Novel, we discuss whether or not the swiftly changing social standing of the FF was a reflection of Lee and Kirby’s success with the book, or simply something that all superhero comics have to deal with. How does Stan Lee deal with the concept of the underdog? (Spoiler: not that well.)
0:53:10-0:57:14: The first letters page brings a handful of great surprises, including the origins of Stan Lee’s self-mythology. Guest-starring a member of the Marvel Bullpen! We then return to the story in progress, with Jeff selecting a scene that he hopes will definitely show up in this summer’s Fantastic Four movie, while also describing the climax of the issue’s plot thusly: “Oh, come on.”
0:57:14-1:00:00: The strange magic of Fantastic Four #4 is revealed for both Jeff and myself, oddly enough. Is this the greatest introduction to the team? In the words of Chris Claremont, “Maybe so! Maybe no!” (If this issue was in Bring On The Bad Guys, let us know? The Internet failed me when I looked into it.) 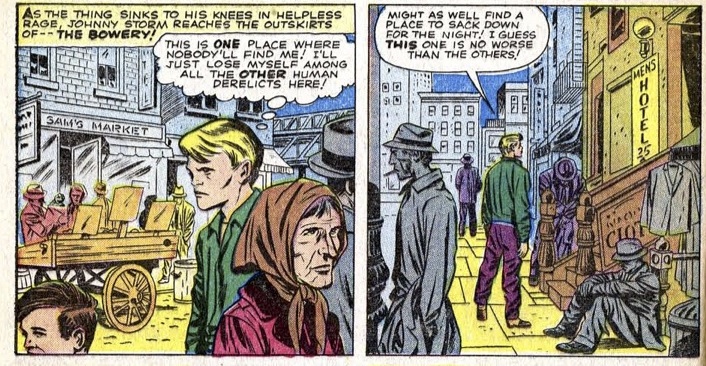 1:00:00-1:15:25: We dig into the sheer Kirby-ness of FF #4, from the weird comedy to both the impressive depictions of the Bowery and a couple of instances where he predicts pop art years before it goes mainstream. Seriously, this is such a great, great issue — albeit an uneven one in terms of tone and a “disquieting” one, to use Jeff’s term. Is that Kirby’s fault? Trigger Warning: this sequence features the words “Then there’s the fucking whale with hands.” 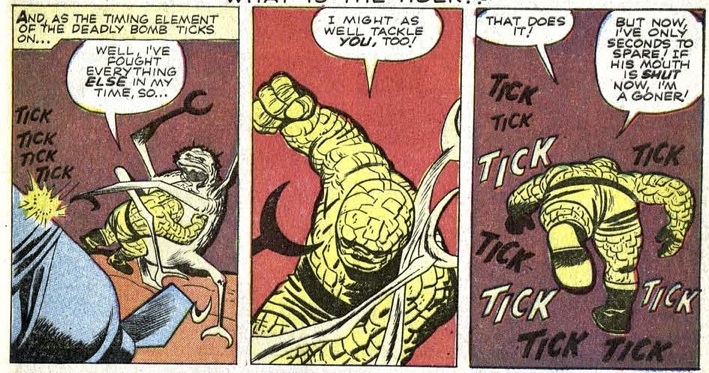 The Tick Tick Tick panels that Jeff and I both love so much.

1:15:25-1:31:22: We reach the first appearance of Doctor Doom, whose very first panel really tells you everything you need to know about him, and how perfectly Kirby captures his origin sequence — just before the story swerves in a direction that no-one could see coming, because what the hell, everyone. Before any of that happens, though, Roy Thomas pops up in the letters page and we ask the important questions: Why do travelers in the past have pirate disguise kits? Is the Thing cursed? And is this the end of the beginning of Ben Grimm? 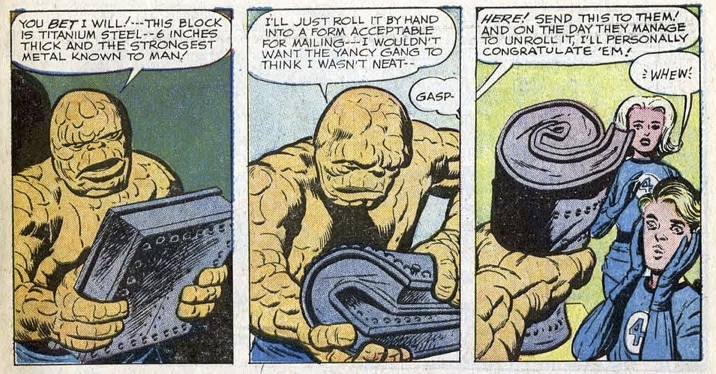 The Yancy Street Gang’s main purpose in their first appearance? Humanizing the Thing.

1:31:22-1:38:30: Finally, we reach the sixth issue — by now, you’re realizing quite why this episode is as long as it is — just as the Fantastic Four become outright celebrities, and the Yancy Street Gang make their debut. “This is a quantum leap forward!” Jeff says, and impressively neither of us make a Scott Bakula reference. I’m sorry. Despite that, we get through this one relatively quickly because it’s not a favorite, and manages to diminish everyone involved (although Jeff does make a good case for this issue being a stealth reboot of the Sub-Mariner, just two issues after his debut in the Marvel Age of Comics).
1:38:30-1:44:41: Jeff’s not a massive fan of Fantastic Four #7, but I love it. Who knows quite what happened to Lee and Kirby for “Prisoners of Kurrgo, Master of Planet X,” but Jeff’s entirely right when he says that it could’ve been a Simpsons episode. If you’ve been looking for alien Lazy Susans and Reed Richards’ bong, then this issue is exactly what you want, and there’s also the added benefit of Reed revealing that he is, in fact, a massive dick.

Jeff’s favorite part of the issue: Sue Storm kicking someone in the butt while invisible.

1:44:41-1:53:00: I call Fantastic Four #8 “another [issue] full of important shit,” including the first appearance of the Puppet Master — who, for once, is an actual threat and gets the best exit of his fictional life — as well as Alicia, Reed’s quest to cure the Thing and much more. Jeff suggests that perhaps Lee and Kirby have a future in this comic book business, because this is clearly the stage of recording where we’re into hyperbole. (To his credit, he also has some great points to make about why this issue is more fairy-tale-like than the earlier issues.)
1:53:00-2:05:47: There’s a lot going for Fantastic Four #9 — the greatest introduction of the Sub-Mariner in any comic ever, for one — but we talk about the expressiveness of Kirby’s Thing, even at this early stage, the greatness of Kirby’s Hollywood caricatures, and Namor’s willingness to do whatever it takes to fuck Sue Storm. That said, there’re a couple of majorly objectionable things in this issue, with some staggering racism and sexism at play here in a way that’s not been visible in the series before (and it’s hardly been an unsexist series to this point). I also explain to Jeff why Paul Gambaccini isn’t just a pre-Internet troll, but here’s a little bit more context as to why I was familiar with him; his letter to Stan Lee, however, is a thing of greatness. Jeff, meanwhile, likens this issue with the real-world cinematic fortunes of the Fantastic Four. Is Roger Corman the Sub-Mariner?

2:05:47-2:19:18: Who is flagging more by this point, Jeff and me or Lee and Kirby? Here’s a clue: Fantastic Four #10 is an issue that features Lee and Kirby actually appearing in the comic itself to bemoan the fact that they can’t come up with another villain as memorable as Doctor Doom. That said, I’m fully expecting someone to pop up in the comments and tell us that we’re very, very wrong when it comes to the science of flames and being able to burn when cold, because that’s what happens when you talk so boldly about such subjects on the Internet. Nonetheless, Doctor Doom returns, with some wonderfully un-Doom-like dialogue and the greatest theory about dinosaurs that has ever existed. Nonetheless, Jeff has theories about the uber-consistency of Doom in a way that you suspect that Doom himself would approve of. Less likely to be approved of: the Sue Storm pin-up in the issue, and specifically, the caption that accompanies it. We also discuss both the rarely-discussed superpowers, and never-discussed parentage, of Alicia Masters, and I make a joke that might be construed as able-ist re: Battlin’ Jack Murdock’s children that I kind of regret. (Sorry, people who might be offended! I didn’t mean to offend you!)

Inarguably the highlight of Fantastic Four #10

2:19:18-2:27:45: Fantastic Four #11 features the Fantastic Four reading their mail and meeting the Impossible Man for the first time. Guess which of those two things we spend more time talking about? Jeff does have some interesting thoughts about possible roots for Impy’s origins, however. There’s also a new origin of the Fantastic Four and an important revelation about Reed Richards’ past, and Stan Lee demonstrates why he really shouldn’t try and tackle sexism as an important topic. (Entirely unrelated to the Fantastic Four, Jeff also discovers the previously-unknown link between Dave Sim and Dim Sum.)

Reed and Ben aren’t going to take sexism lightly — unless it’s THEIR sexism!

2:27:45-2:36:04: Both Jeff and I are fairly non-plussed by Fantastic Four #12, which puts the team on the trail of the Hulk. There are some Avengers re-read flashbacks, and we talk about the need for the series to actually be centered around the Fantastic Four themselves, and the way in which the Hulk defeated the two men who created him.
2:36:04-end: In which we finally reach the end, talk (briefly) about which of the issues worked and didn’t work in the first 12, and tell you where you can find us on the Internet: Twitter, Tumblr and Patreon, where 94 people are helping us record things like this.

This, then, is the beginning of the World’s Greatest Magazine Podcast. We hope you enjoy it, and will stick with us as we power through the rest of the first volume of the series. (We’ll try to make episodes shorter in future, too.)