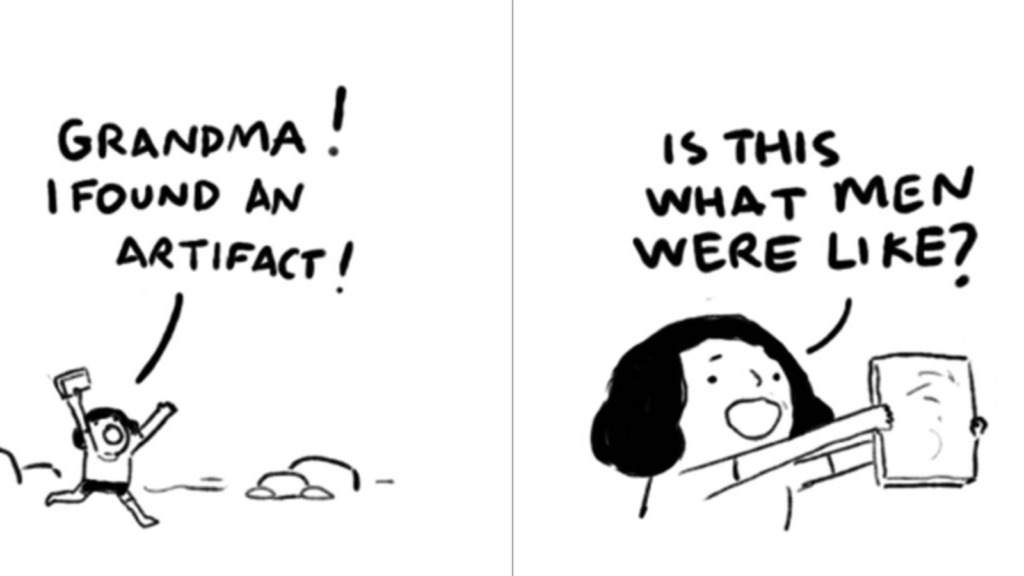 0:01-11:45:  Greetings from Graeme “Jury Duty” McMillan and Jeff “Read a Tom King Comic About Jury Duty” Lester, for reasons those impromptu nicknames probably make clear, leap right in to discussing Batman #53 by Tom King, Lee Weeks and Elizabeth Breitweiser.  Like most of King’s Batman, the issue continues to hit Graeme in the feels, whereas Jeff is a little…more…uh, reserved in his praise, shall we say? Discussed: emotional pin-ups; Kirby immediacy plus Moore formalism equals…profit?  (I’m leaning pretty heavy here on the ellipses I’m noticing.); Batman: Year One; and more. 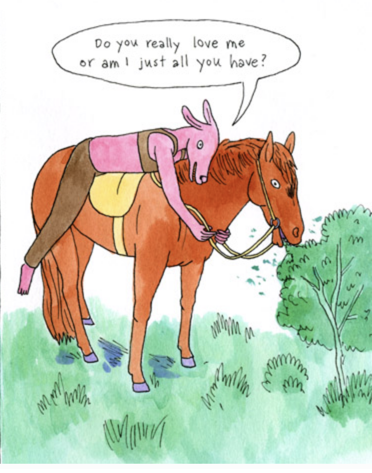 11:45-23:30:  Jeff, who admits to being crabbier than usual, cedes the ground to Graeme, which is a good thing for us all, as Graeme has read some upcoming graphic novels we should be on the lookout for, and talks about them in exciting (but non-spoilery) ways:  the amazing sounding Bastard by Max de Radiguès; Coyote Doggirl by Lisa Hanawalt; Woman World by Aminder Dhaliwal; and the complete collection of Berlin by Jason Lutes (!!!). 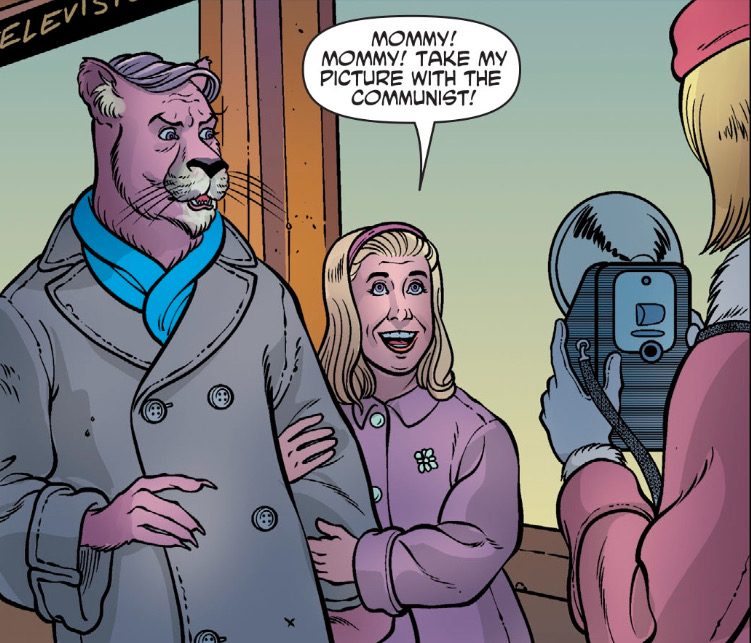 23:30-31:18: Graeme has finally read all of Snagglepuss: Exit Stage Left by Mark Russell, Mike Feehan, and Sean Russell.  Remarkably, we manage to keep the discussion spoiler-free, despite Graeme talking about how much th ending really makes the whole work really that much stronger.
31:18-46:21: Speaking of Russell, Graeme mentions Russell’s recent appearance on the 2000AD podcast (in part, although not wholly, because of the work Russell is doing on Dredd for IDW), and that spurs us on to talk about Judge Dredd, the Simpsons, and the changing nature of satire and Mega City One.
46:21-1:05:21: Graeme spins off from all this to talk about something he did not love: the coming collection of Batman: White Knight by Sean Murphy. Also discussed: Mark Millar; Mark Millar and Grant Morrison’s Swamp Thing; Batman: The Damned; Batman: Hush; Legends of the Dark Knight; all those god-damned Batman books; and more. 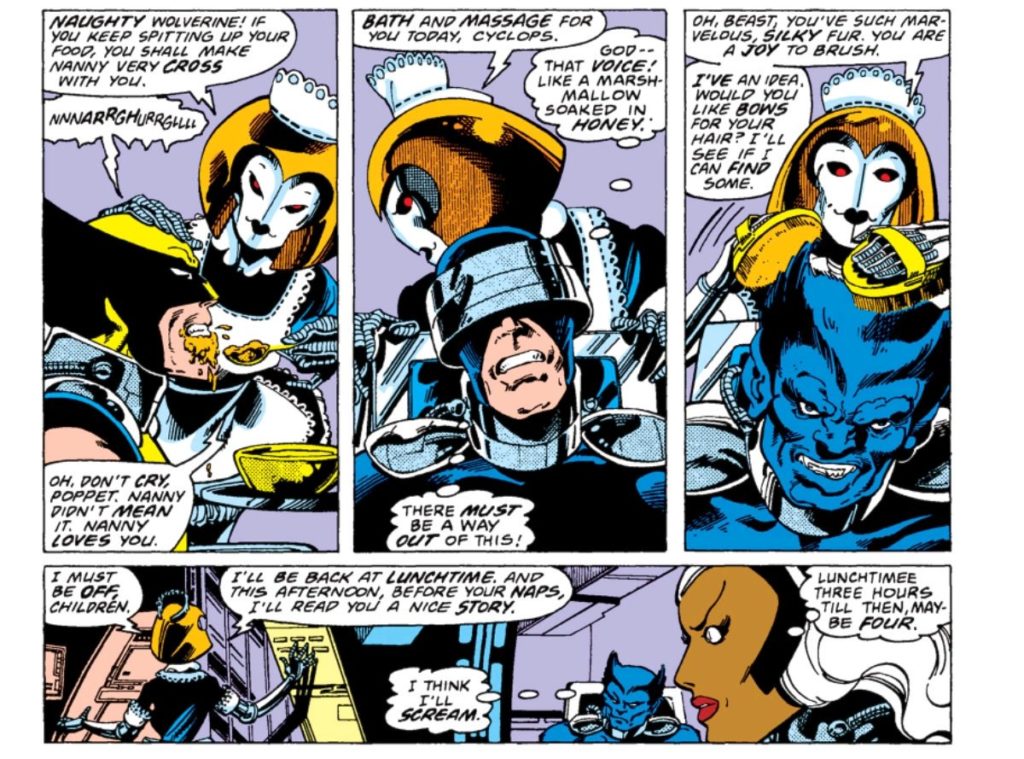 1:05:21-1:22:38: Talking about who we might want to see about Batman leads, oddly, to a new theory Jeff has about the success of Claremont’s Uncanny X-Men and why they work better than the original Lee/Kirby X-Men.  And from there, we end up discussing the switch on the book’s focus from gay culture to (maybe?) Israel?
1:22:38-1:41:23: Turns out this is the right week to be talking about old X-Men stories and creators like John Byrne, because this is the week it was announced C.B. Cebulski/Akira Yoshida signed John Byrne to return to Marvel and do an X-Men book.  What the hell is going on?  We discuss, and that also leads us to talk a bit about sales of Superman under Bendis, Pearl #1 by Bendis and Alex Maleev, and more. 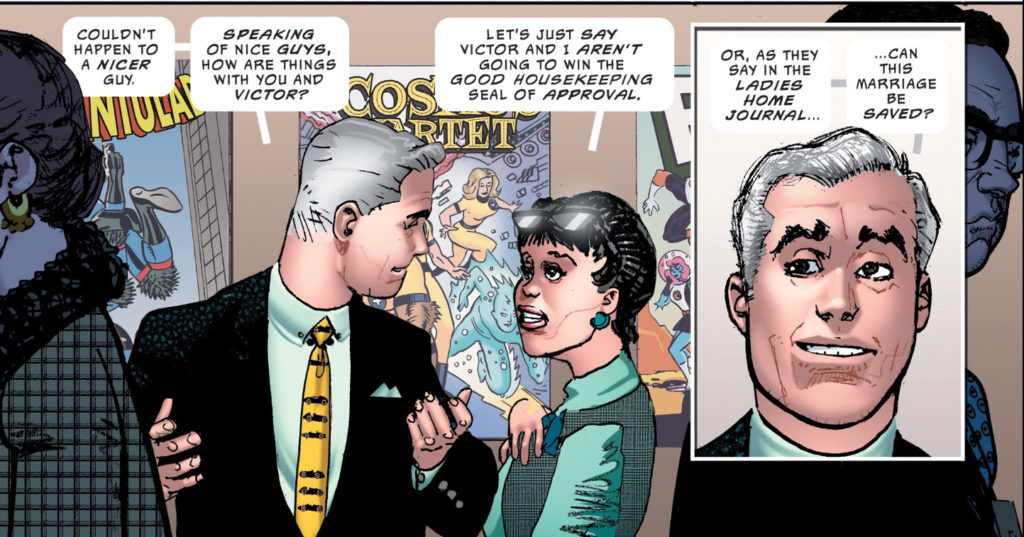 1:41:23-2:00:43: The wonderful Leef Smith of Mission: Comics and Art asked us to read Hey Kids Comics #1 by Howard Chaykin and share our thoughts.  Graeme didn’t read it, Jeff did, and…hoo boy.
2:00:43-2:06:36: Jeff also read Monthly Girls’ Nozaki-Kun, Vol. 9 by Izumi Tsubaki.  He’s also read Prison School, Vol. 3 by Akira Hiramoto, and believe you me, you won’t mistake one series for the other anytime soon.
2:06:36-2:12:08: Graeme has a recommendation for Jeff:  the first two books of Brink by Dan Abnett and I.N.J. Culbard, a 2000 A.D. series that’s kind of a detective story, kind of not: Graeme mentions someone else’s description of it as “True Detective meets Outland.”
2:12:08-2:27:24: In “news,” Jeff wants to know if Graeme knows anything about this weird and more than slightly suspect TokyoPop sale on Comixology.  Selling digital versions of books currently available from other publishers? Licensed comics featuring characters they surely can’t still own the licenes for? What is up with this sale?  Graeme doesn’t have any answers, but he does point out some strange stuff about the Project Superpowers sale.  And we talk about some reading options currently available on Marvel Unlimited, including the entire run of Master of Kung-Fu, which leads Graeme to ask a question—“Jeff, I’ve never read Master of Kung-Fu.  Should I?”—Jeff has literally never thought of before.
2:27:24-end:  A classic closing comments fakeout!! Look for us on  Stitcher! Itunes! Instagram! Twitter together and separately: Graeme and Jeff! Matt! Tumblr, and  on Patreon where a wonderful group of people make this all possible, including the kind crew at American Ninth Art Studios and Empress Audrey, Queen of the Galaxy, to whom we are especially grateful for their continuing support of this podcast. (And then! We talk about the sentencing of comics writer Gerard Jones to six years of prison, which is admittedly a very, very weird way to end the episode.)  And then we’re out!
NEXT WEEK:  Skip week! Rest up and join us in September!