0:01-6:25: Greetings!  Tech mishaps are a thing of the very recent past, so you get to hear Graeme and Jeff talk about those as they clear the decks for another scintillating episode of Wait, What?! And what’s a better way to cleanse the palette than complaining about tech, we ask you? (No really, we need to know, clearly, because we not only go on about it for far too long, we use some amazingly inapt metaphors…) 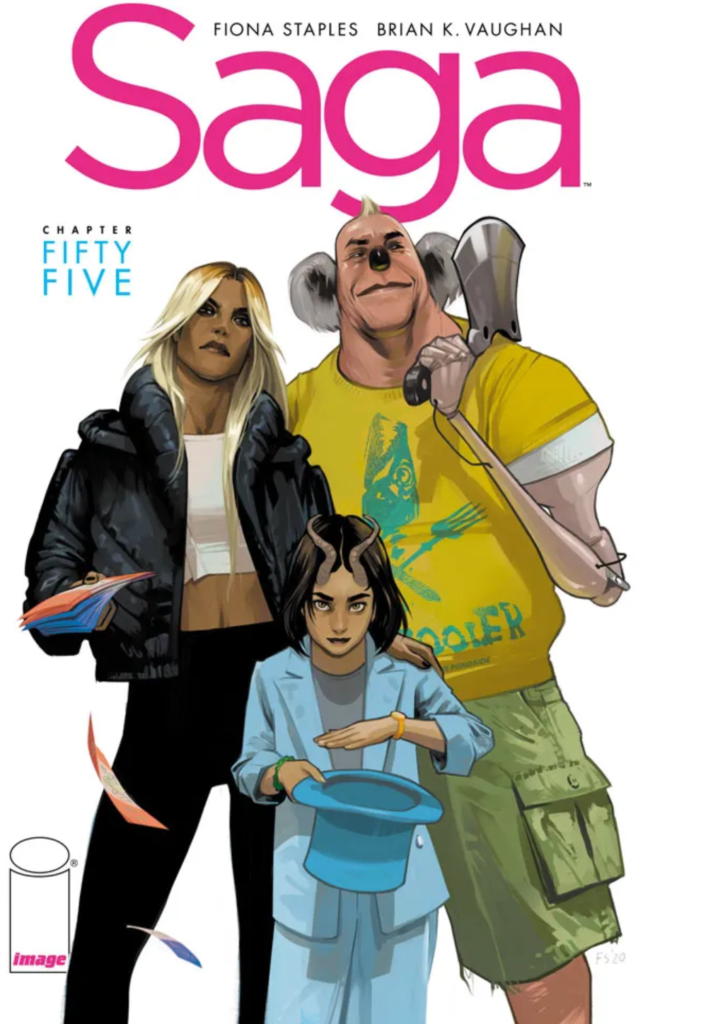 6:25-42:35: Fortunately, Jeff goes on to blame all of our tech problems on the return of SAGA, which is a very good segue (if I do say so myself) because it allows us to talk about, yes, the return of Brian K. Vaughan and Fiona Staple’s beloved sci-fi family epic! We talk about how long it’s been gone, how much of its audience will return with it, the Game of Thrones prequel (House of the Dragon), The Matrix Rebooteration, Daredevil: The Target, the return of the Busiekverse, Love and Rockets, Jeff’s experience reading Wotakoi: Love is Hard for Otaku, Vol. 5 (the American version, so vols. 9 and 10 of the Japanese tankōbon), Graeme McMillan: the Littlest Hobo, and more. 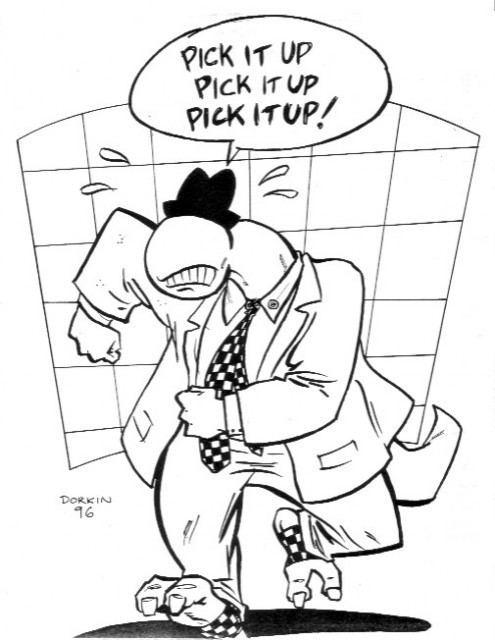 42:35-49:49: Graeme has re-read (and as he says, in some cases, read) Evan Dorkin’s Pirate Corp$ and its continuation, Hectic Planet. It kind of ties in to what we’re talking about on many levels—it like some of the examples from our first half-hour remains unfinished—but was also read just as its own thing that Graeme, a fan of Dorkin, wanted the chance to fully (re-)experience. Also discussed: this thread from Dorkin talking about stepping back from comics for a bit.
49:49-1:02:50: Good news/bad news: if last episode you enjoyed us shit talking Scott McCloud’s Reinventing Comics based on our memories of more than twenty years, you’ll be interested to know that Graeme sat his ass down, got a copy from the library, and re-read it. And what he discovered in revisiting it may…surprise you?! It’s a great little segment if you’re interested in setting the record straight, less so if (like Jeff) you just wanted complain about it some more? 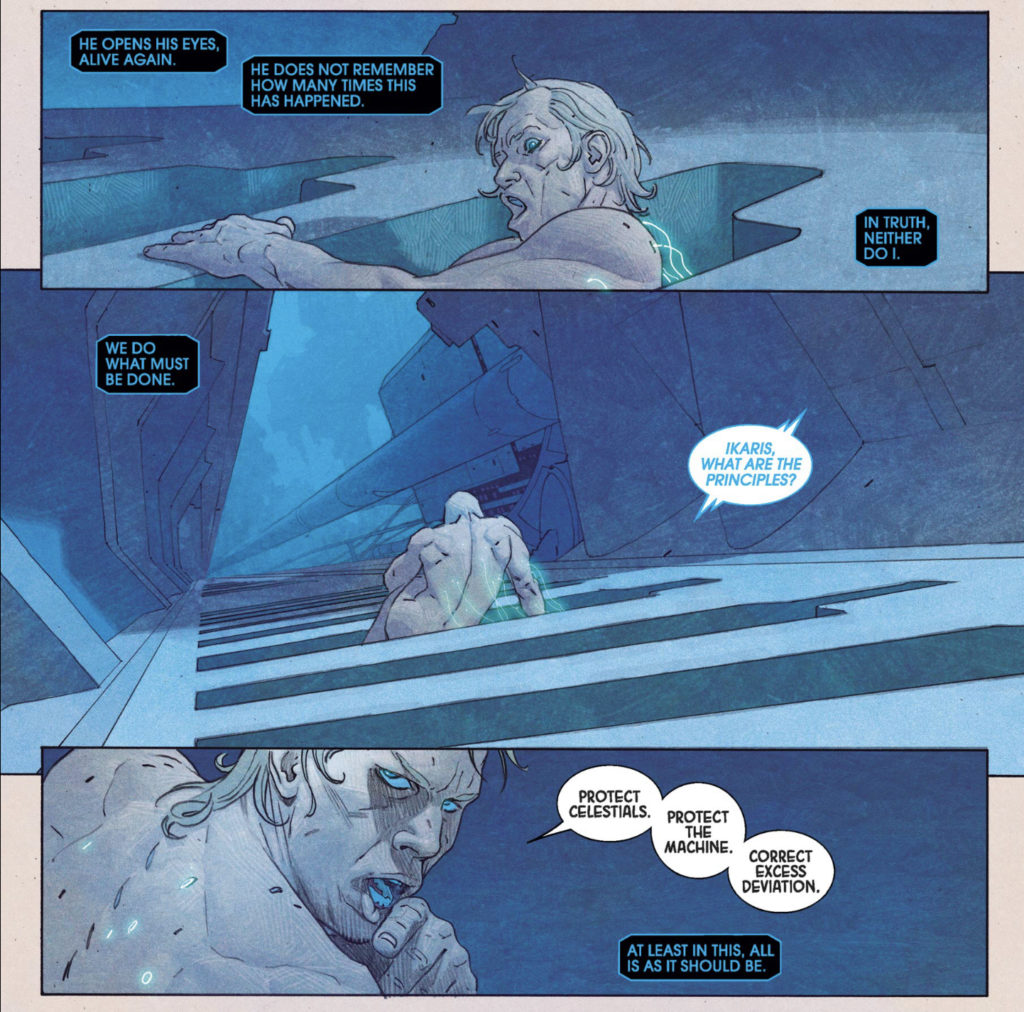 1:02:50-1:15:49: And to add faux insult to nonexistent injury, Graeme has read the first arc of Kieron Gillen and Esad Ribic’s The Eternals series for Marvel, despite the potential for tsk-ery from Jeff. With great restraint, Graeme manages to avoid spoiling the end of the first arc (since it’s not yet out on Marvel Unlimited) but also talks about all the good stuff Gillen and Ribic bring to the book. It is a blissfully spoiler free discussion that nonetheless digs into why Graeme thinks the book is quite possibly the best thing Marvel is publishing right now.
1:15:49-1:34:19: Graeme’s also been swigging from DC’s well of Outsiders comics, re-reading not just the 80s incarnation by Mike W. Barr and Jim Aparo (and others, as Jeff finds out) but also the very different re-incarnation by Barr in the ’90s. The Outsiders, the quintessential 80s super-team, as a 90s title? Graeme tells us what works and what doesn’t and we speculate about why. 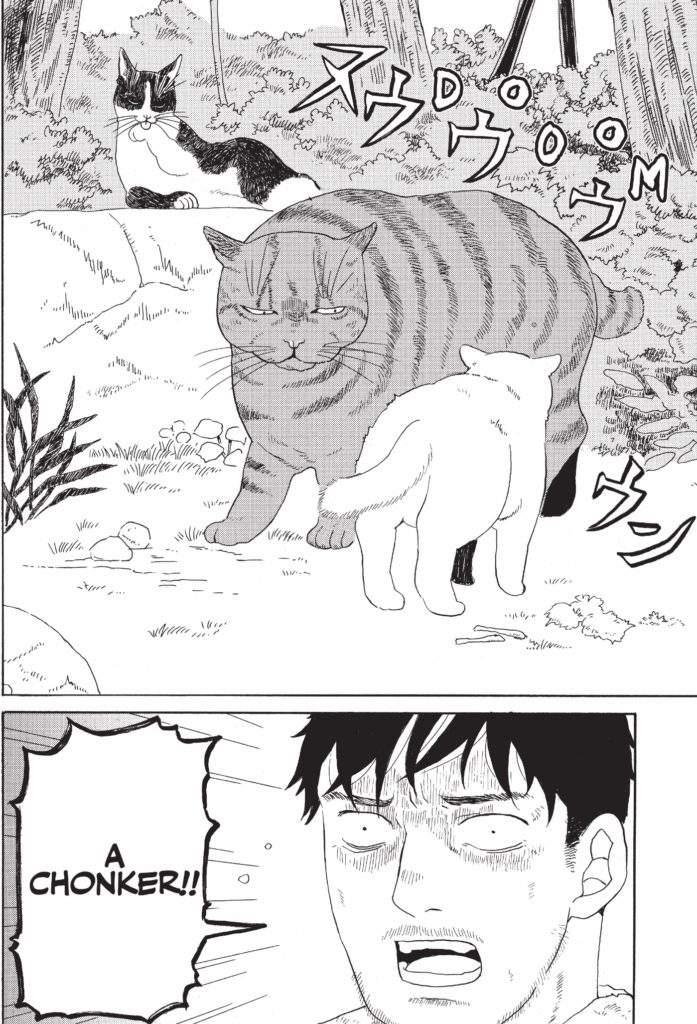 1:34:19-1:49:54: Are you ready for another round of My Four Manga? Graeme is (thank goodness) and Jeff kind of is? So join us as we talk about The Walking Cat; You’re My Demon Lord, Senpai!; Booty Royale, Never Go Down Without A Fight; and Reborn as a Vending Machine, I Wander the Dungeon! Can Graeme guess the fake? Can Jeff stump Graeme?
1:49:54-1:55:35: You might’ve missed Joe (“Jog”) McCulloch’s brilliant obit/tribute to Takao Saito, creator of Jeff’s beloved Golgo 13 (Jeff is far from alone in that regard, as you know.). He takes the time to mention Jog’s excellent piece, in part so he can link to it here. (Jeff also talks quickly about some of the other stuff he’s read recently.)
1:55:35-1:58:27: And Graeme mentions how much he’s enjoyed reading The Phoenix Colossal Comics Collection, a—you guessed it—very big collection of comics from the UK’s Phoenix magazine.
1:58:27-end:  Closing Comments are a go! Look for us on  Stitcher! Itunes! Instagram! Twitter together and separately: Graeme and Jeff! Tumblr, and  on Patreon where a wonderful group of people make this all possible, including Empress Audrey, Queen of the Galaxy, to whom we are especially grateful for her continuing support of this podcast.
Next week: Rock out with your Drokk out! Read Judge Dredd: The Complete Case Files, Vol. 29 and join us!