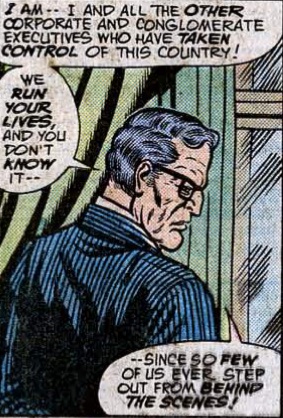 Hey, everyone!  This is a big episode in more ways than one:  not only is it a two and a half hour episode for you, not only is it our epic conclusion to our discussion Steve Englehart’s amazing run on The Avengers, but it is also the episode to listen to if you want to win one of the five Oily Comics Summer Bundles!

It’s an episode so big, we…had to skimp a bit on the show notes?  Join us after the jump for notes, apologies, and your chance to win it big!

As it turns out, I’m writing this from a hotel room down the coast where the missus and I are having a little minication, but I didn’t want to miss our podcasting deadline so…the episode is up, the contest is live, and it’s all pretty great.  But the show notes aren’t as image-rific as I personally would like, because god knows it was like I screenshotted ever other page of Avengers #135-151.  Maybe I can update at a later point?

Anyway, enough excuses from me!  Get listening!

00:00-4:24: Ten syllable greetings to you! Here’s a topic for us to discuss for some episode in the future—Graeme’s distaste (if not open fear) of nicknames!
04:24-19:27: Hey, our Oily Comics Summer Reading Giveaway! These are the rules for how you can win one of the five Oily Comics Summer Bundle we are giving away—although the rules are not at all difficult (if you’ve ever listened to a radio station doing a “listen for the phrase that pays” giveaway, you pretty much know how this works), you will be impressed at how long it takes us to communicate them to you. Also under discussion: Charles Forsman, how great Charles Forsman is, how much we like Charles Forsman, how you should all be reading Charles Forsman, and whether Jeff really does think of himself as the Robin to Graeme’s Batman, or what?
19:27-21:25: Avengers! Jeff is dying to talk about the end of Steve Englehart’s run on Avengers. Although last time we got up to issue #140 or so, Jeff *totally* forgot a really big epiphany he had around issue #135 or so. So drag out your longboxes, or your GT Corp. collection, or trades, or hit up Marvel Unlimited which has all the issues under discussion (although without the letter pages, which may or may not be crucial).
21:25-40:05: Jeff has a theory that arises out of re-reading Avengers #135 in the wake of reading much-mentioned-in-these-parts Sean Howe’s Marvel Comics: The Untold Story. Discussed: The Vision, the original Human Torch, Professor Phineas T. Horton, Carl Burgos, secret histories, the legacy of superheroes and the legacy of the comics industry, and more.
40:05-43:18: A little more about Englehart’s M.O., according to Graeme: his ability to find the most obscure corners of the universe he’s working in and figuring out ways to connect them (see connecting Patsy Walker, The Cat, and his early run on Amazing Adventures to create Hellcat in the pages of Avengers).
43:18-45:07: Intermission! Which is to say that Jeff has to get water and Graeme has to shit-talk Jeff.
45:07-53:25: Back to Avengers talk! The return of The Beast in Avengers #137 and Englehart’s re-creation of Hank McCoy. Also discussed: Grant Morrison’s run in New X-Men, our beloved phrase (though not the one that pays) “Oh my stars and garters!”, Hank’s relationship with Patsy Walker, and more.
53:25-1:40:12: I don’t know, I’m feeling like breaking all this stuff up into discreet units may not be the best way to capture the flow of our conversation (or, even worse, it has a tendency to push Jeff’s talking points—since Jeff is writing this and can remember what he was trying to talk about over Graeme’s) so I’m going to go just a little bit more freeform from here on out. Around here, we’re talking about our appreciation of how Englehart tries something and then, when it works, he builds on it (such as the way he splits the team’s apart over the arcs). Included: a discussion of the title of issue #141; a set-up and punchline that plays across issues; a comparison and contrast of Marvel Earth and DC Earth; the return of the return of the return of Kang as the only “real” fight against a time traveler; Iron Man’s sexual harassment problem; the all-out best “Captain America is a dick” moment in the long history of the Avengers’ “Captain America is a dick” moments; abandoned storylines vs. discarded plot points; The Avengers’ obsession with hospitals and health care; Keith Pollard and the proper placement of tear ducts (which one of us clearly knows and the other of us clearly does not); the letters page from Avengers #151 and how it relates to William H. Macy blowing his brains out in Boogie Nights; plus much, much more.
1:40:12-2:01:52: Jumping decades and comic book companies, we jump over to discuss the first volume of
Injustice: Gods Among Us, Vol. 1

by Tom Taylor, Jheremy Raapack, Mike S. Miller, Bruno Redondo and a slew of other artists and colorists. Jeff was quite surprised by enjoying it, and is also surprised that Graeme enjoyed it. We talk about the how and whys of this turn of events. Also discussed: DC’s digital anthology titles; Earth 2; the phrase “grim & gritty grits,” and more.
2:01:52-2:22:44: Bonus content! We decide to run long so we can talk about the recent DC news about its new royalty structure, colorist credits, and the public reaction thereto. Also discussed: Mark Waid’s reaction on Twitter, Dan Jurgens’ reaction to Mark Waid on Twitter, when Graeme stopped reading Superman in the 90s, Tom Breevort being kinda weird on Formspring, Graeme’s moment of clarity, and more. (Note: if you listen really hard during Jeff’s blathering around 2:18:24, you can hear the bells of his nearby church ringing. They kind of sound like an ice cream truck, which sort of makes Jeff sound to hear now because he sometimes really does wish there was an ice cream truck nearby and not a church.)
2:22:44-2:25:44: Closing comments! Best wishes to all entering our Oily Summer Bundle comics giveaway, “may the odds be ever in your favor,” (or as Graeme puts it oh so wonderfully: Everybody’s a winner, baby, that’s the truth).
2:25:44-end: Psych! Graeme is compelled to at least mention—in a brief and pithy way—Mark Millar and Duncan Fegredo’s MPH #2, as well as praise for Flash Gordon #3, by Jeff Parker, Evan Shaner and Jordie Bellaire; the conclusion of Indigo Prime in 2000 A.D. #1887; and Superman #32 by Geoff Johns and John Romita, Jr. Jeff wants to give a shout-out to Sex Criminals #6, which both he and Graeme thought was really strong; the Ian Bertram issue of Batman Eternal (#11), the Mikel Janin issue (#12); Saga #20, Batman #32 (especially FCO Plascencia!)

And then we are out!