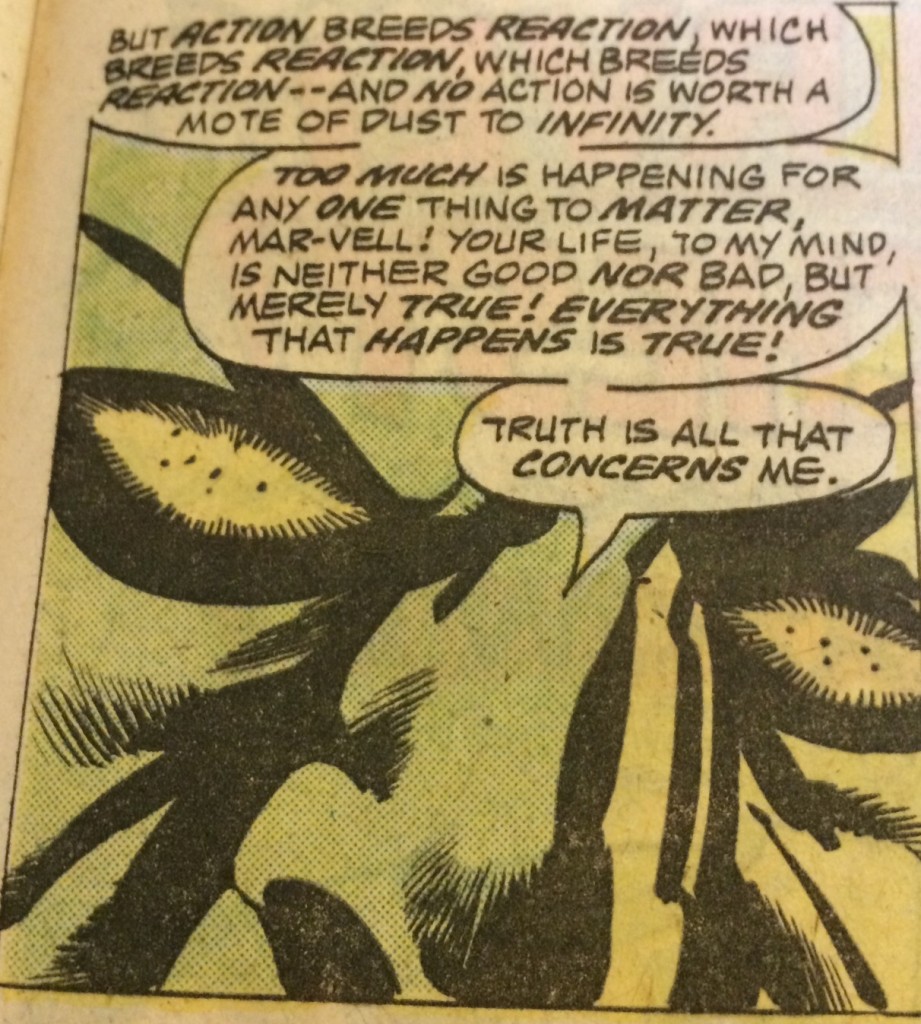 It’s almost Halloween and I am currently very much enjoying the fruits of my labors…although you have to understand I’m using the term “labors” in the 21st Century First World definition, which is to say “purchases.”  The last month has pretty much been a lot of comic book related purchasing but not nearly as much comic book related reading…until this week.  This week, I hunkered down on the couch with the iPad and read some comics.  And when I got tired of that, I went to the book shelf and grabbed some manga.  And when I got tired of that, I grabbed that smelly stack of old comics I bought up in Portland while Graeme stood next to me, more or less aghast.

So, yeah.  A very good week.  Let me tell you more about it behind the jump.

(RADIOACTIVE) SPIDER-GWEN #1:  Is this the little title that can…or the little title that can’t?  I’m still unsure, as the original team returns to do exactly what they were doing before renumbering. And while there are a whole bunch of things in here I like–there’s a bodega bandit, whose partner is an adorable dog wearing a domino mask, and the last page reveals shows Captain America who is quite possibly Sam(antha) Wilson, and I just enjoy the way Ricco Renzi gives Robbi Rodriguez a softer version of the FCO Plasencia treatment with bright yellow skies, and flashbacks the color of overchlorinated swimming pools,  But I still put down the book feeling like nothing happened.

I can’t put my finger on exactly why that is, but I’m starting suspect Rodriguez’s work is completely lively and engaging until it comes to an action scene and then it just loses something vital.  Simiarly, LaTour’s writing is fine with the wisecracks and the non-Gwen subplots, but the conflict between Gwen and friends isn’t dramatized, it’s pointed at from a distance.  I admit I’m a little rusty on this score, but if your artist eschews fight scenes and your writer eschews personal bathos, can it really be a satisfying Spidey book?  I dunno; maybe not for this old fart but I’m willing to give it a few more issues. Because I *want* this to work, damn it. 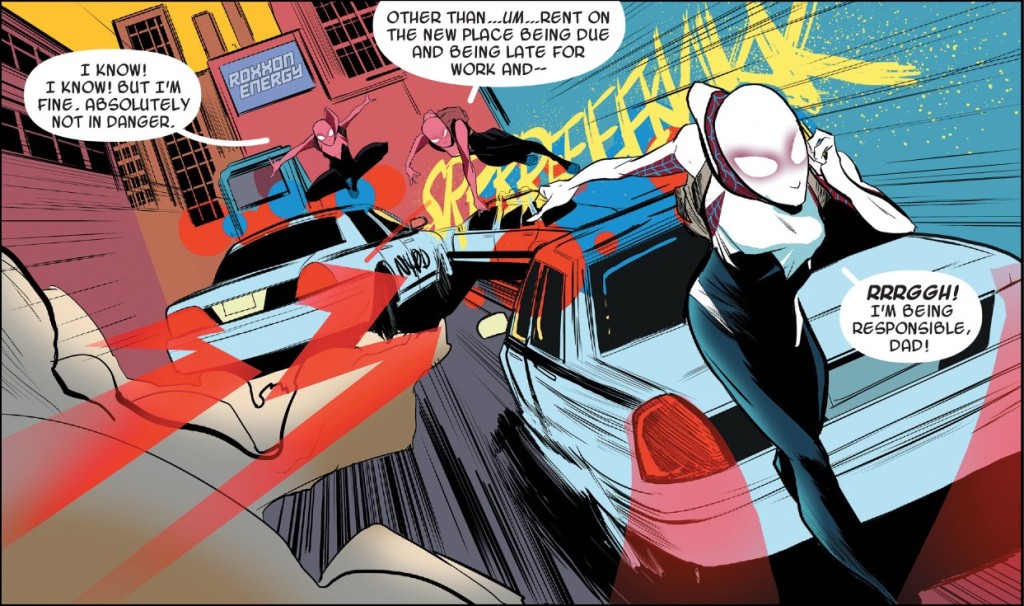 THE TWILIGHT CHILDREN #1: Speaking of old farts, I really liked this first issue written by Gilbert “Crazy Sex!” Hernandez and drawn by Darwyn “Drinky Crow!” Cooke for the way in which Cooke lovingly takes a story with the typical Beto elements–a small town inhabited by drunks, kids, and clandestine lovers; an impossible event nobody bats an eye at because it’s happened so often before; a key to the mystic and the ineffable as embodied in the sexual allure of a stranger–and gives them a lush visual upgrade.  For me, a lot of the Palomar stories felt like Hernandez taking old torpid movies that used to play at all  hours on the TV and overlaying his own stories and obsessions, so I loved seeing Cooke take a Palomar pastiche and giving it the feel of a “big” Hollywood production from 1959:  there are still kids chasing one another on the beach, still dreamers wandering about oblivious, still wild-eyed drunks hollering on the streets, but it’s shot in Cinemascope and filmed in Technicolor.

I actually love Hernandez as a cartoonist, but what’s obvious is that Cooke does too: a lot of his panel choices look like the ones Hernandez would make, and he’s tweaked his style enough that his character designs echo Hernandez’s (although, hmm, I dunno, Hernandez is a fast enough artist that maybe what I’m seeing is the result of his doing layouts or very detailed thumbnails, maybe?).

The project seems infused with a lot of mutual respect and affection. And it looks great.  I don’t know if I’ll be quite as happy if this story follows the rest of the Beto template (a quick chaotic climax, followed by the heartbroken re-embracing the comfort of the status quo rather than using their pain as an opportunity for change), but I’m as tentatively optimistic about it to more or less the same degree I’m tentatively pessimistic about Spider-Gwen. 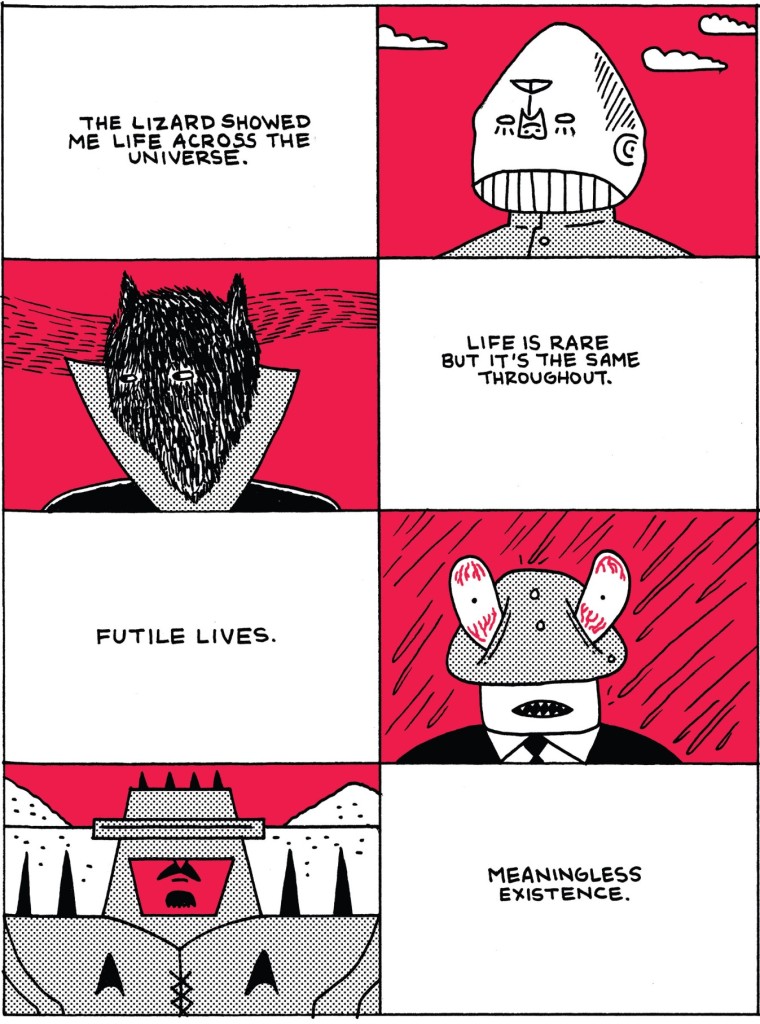 AN ENTITY OBSERVES ALL THINGS:  I picked up the digital version of this collection of stories by Box Brown because the title is about as perfect as a title can be… although frankly the cover of a purpleish eyeball-crested space pyramid tractorbeaming/destroying a frail human silhouette is also pretty damn sweet.

As can kinda/sorta be inferred by the cover, An Entity Observes All Things is a collection of science fiction stories, nine or so, each more or less done in its own two- or three-color palette and drawn in a bold simple style that reminds me of later Ivan Brunetti, or when the hipfecta of Clowes/Tomine/Ware draw something they want to conjure a feeling of Schulz or Bushmiller.  And as with these cartoonists, Brown’s style has an air of rueful humor to it, as if the artist is mocking their own appreciation for the style, rather than the style itself.

As for the stories themselves, they don’t move beyond the bite-sized but by being all of the same stripe, they strike a complex tone of sadness and resignation and sustain it.  In “Memorexia,” a man undergoes a a complex procedure to revisit his father’s last day; in “Mundo Jelly,” a podcasting professor descends into the heart of a dead world for the perfect waffle; in “Communion of the Star Warriors,” a bored worker interrupts the emotional reunion of two kaiju robots; and in “An Entity Observes All Things”, a cosmic creature kinda sorta like The Watcher makes a choice kinda sorta like The Little Prince’s for the opportunity to kinda sorta be free.  Even when Brown is just gassing about, as in “Voyage of the Golden Retriever,” which reads almost exactly like someone remade The Life Aquatic with Steve Zissou as a pizza commercial, there’s a consistently pessimistic belief in humanity’s ability to smother its sense of wonder with petty cultural preoccupations, like greed and organized religion (or videogames and pizza).

In short, it’s old school indy cartoonist pessimism in a shiny new wrapper. Brown is no Michael DeForge–at least not yet–but An Entity Observes All Things is enjoyably distressing.  I liked it a lot.

THE LETTERS PAGES OF CAPTAIN MARVEL #35-46:  As you may recall, when I was up in Portland (Oregon) for the Creative Summit, I took full advantage of the opportunities afforded us by our summiting, and I picked up an honest-to-god pile of comics at Cloud Nine Comics, some of which were Steve Englehart’s and Al Milgrom’s run on Captain Marvel immediately following Jim Starlin.  In theory, the next-best thing to Starlin should’ve been his close chums and partying friends. In practice? Well…

For example, issue #36 of Captain Marvel has a great cover featuring “Marv” (as he’s called throughout) dodging dual blasts from Uatu, The Watcher (an entity who observes all things).  Inside, however, we get only three pages of new material and a reprint of Marv’s origin.  And on the letter column, we get this: 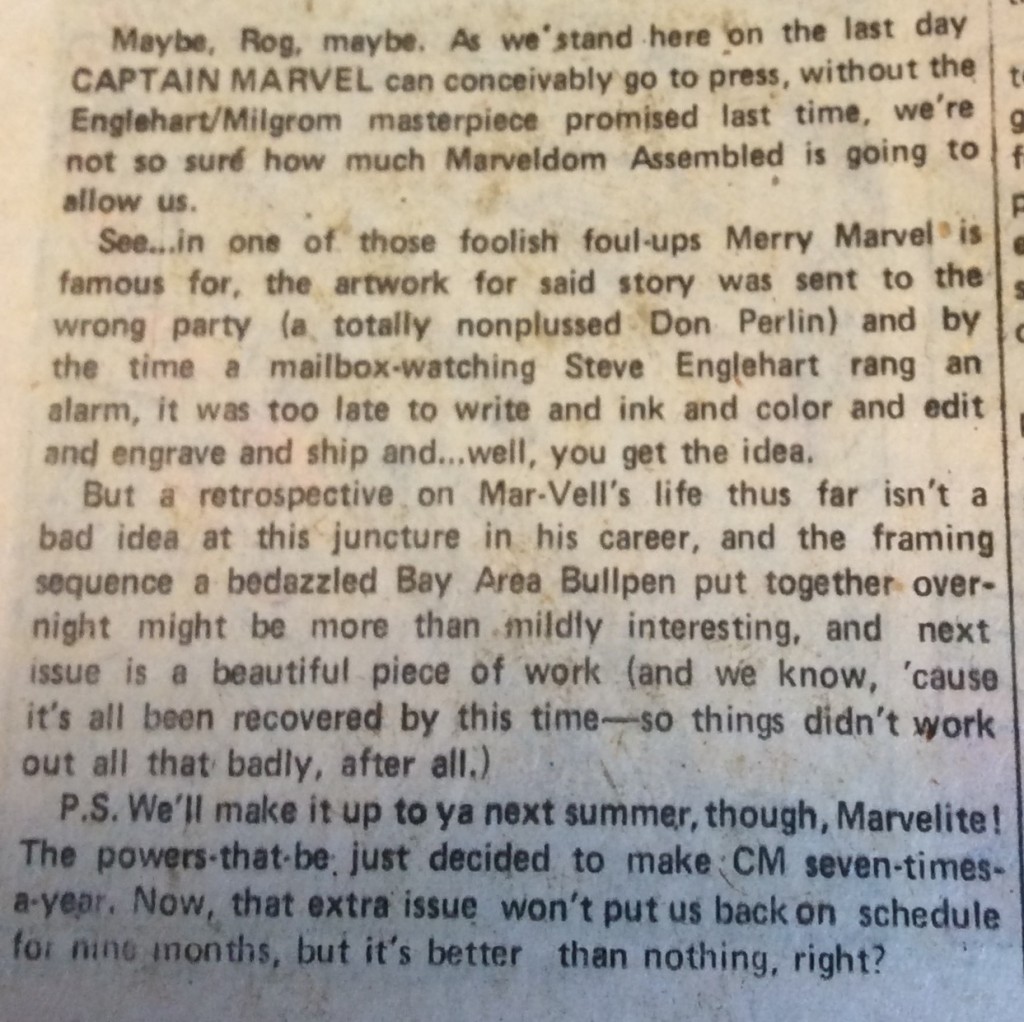 I didn’t think much about it at the time (although I thought it was funny that somehow Don Perlin got the indirect blame for a pretty amazing gaffe).  But as the run goes along, excuses and apologies start to feel more like the norm than the exception. 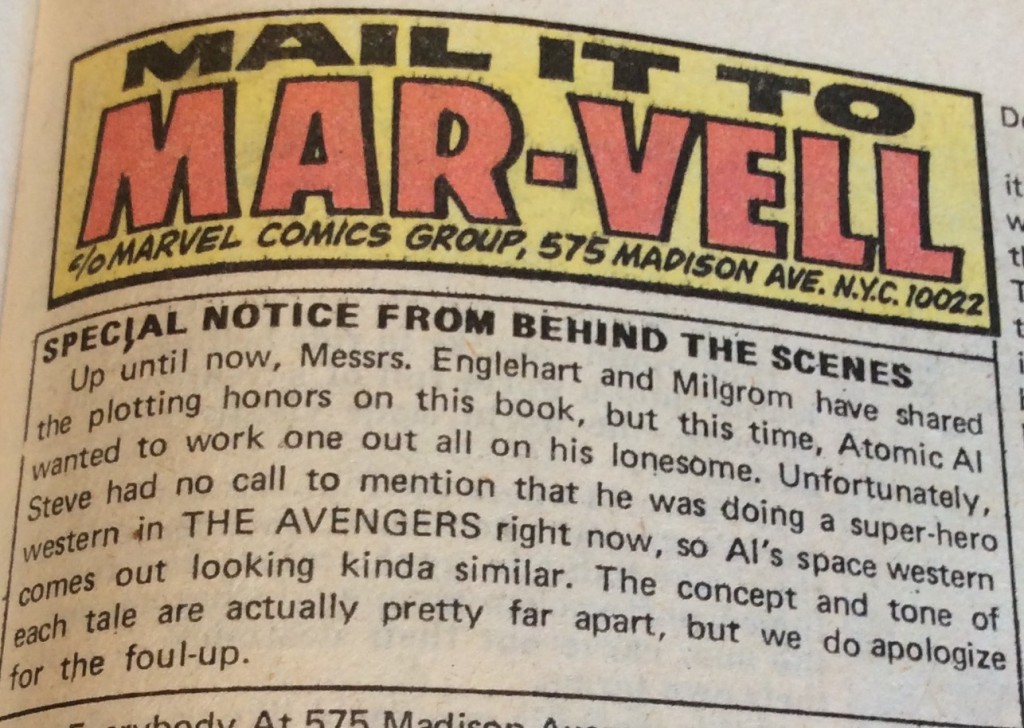 Yes, from what I can tell, someone is apologizing for a similar story in two different comics even though they’re not really similar.  Also,”Steve had no call to mention that he was doing a super-hero western…” is a very odd way of putting things, right?  Nothing conveys a passive-aggressive “don’t blame me!” tone like apologizing for a story in the very same issue it’s published.

Although never let it be said that Englehart doesn’t have his collaborator’s back because here’s the opening to Captain Marvel #43: 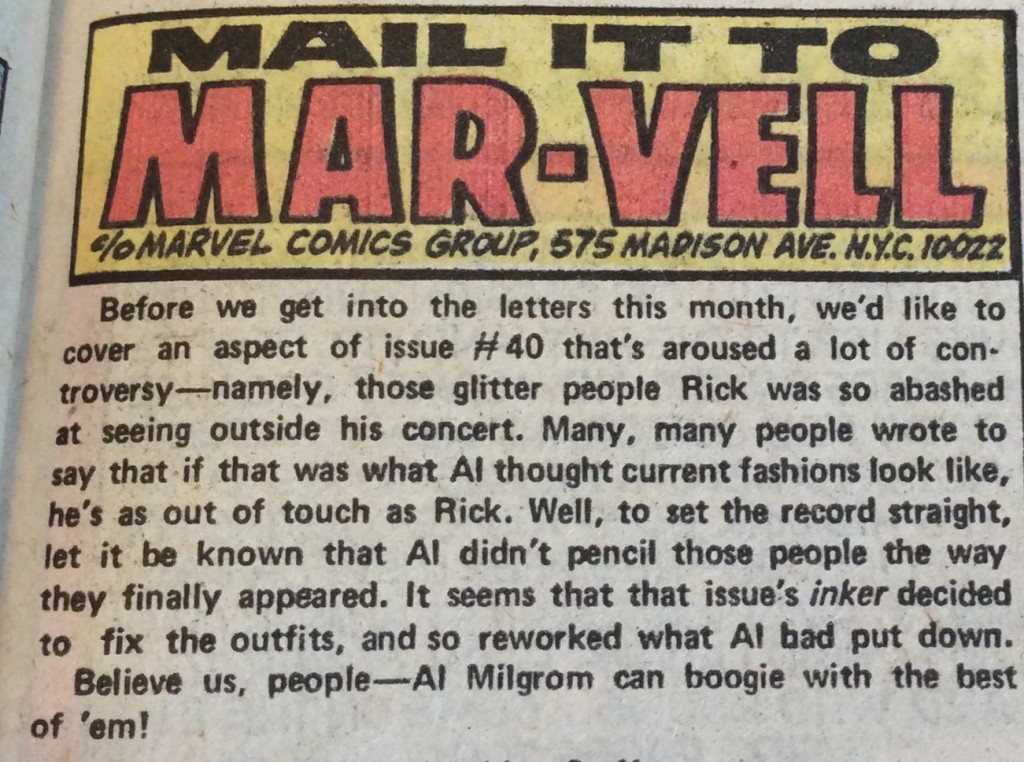 Yes, it’s the mantra of the Seventies all over again: “I’m OK, Milgrom’s OK.”  Sadly, it’s inker Al McWilliams that gets thrown under the boogie bus.  Oh, and in case you’re wondering about the panel in question, it is… kind of glorious?  Check it out: 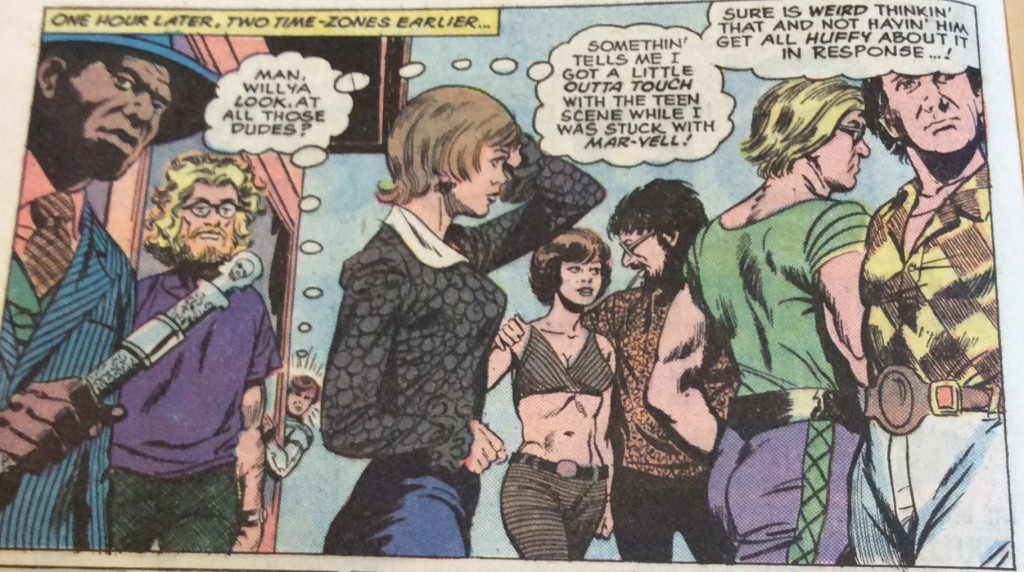 I mean, I don’t see what the big deal is.  My understanding is,at the time this comic was published, Roy Thomas was indeed dressing like Flash Gordon and people everywhere under the age of ninety were wearing their pants up to their belly buttons.  It was the Seventies, people.

Finally (for Englehart) in Captain Marvel #45 and #46, we have a one-two punch.  Here’s the right cross: 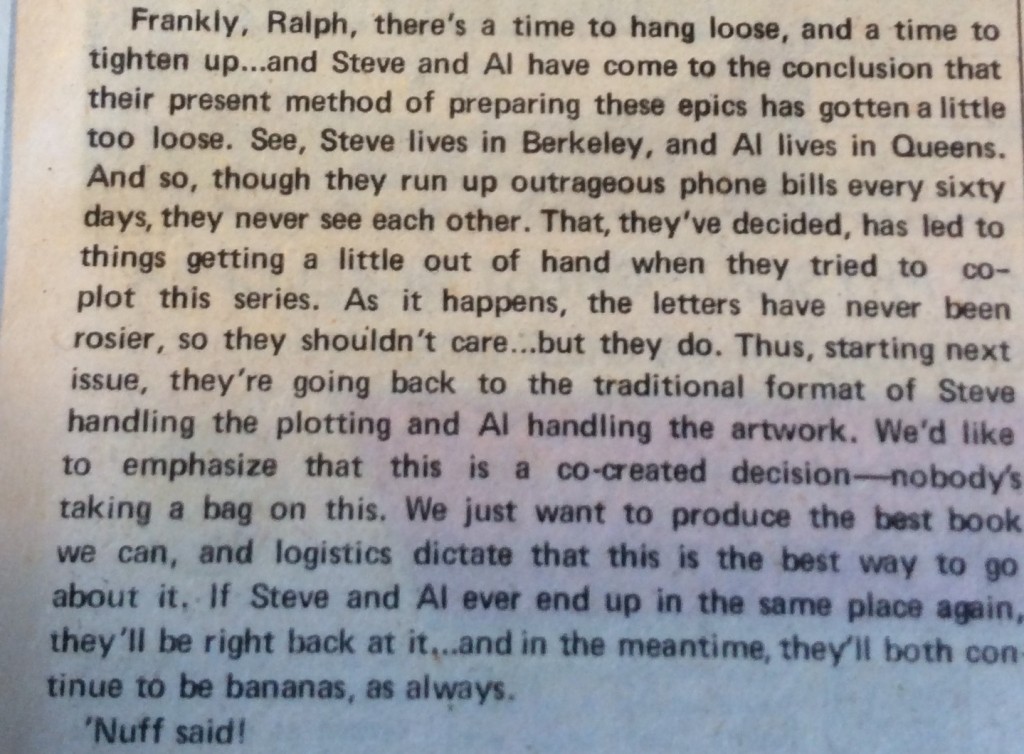 (In case you’re wondering, the “Ralph” being addressed is future Marvel editor Ralph Macchio.  If I got the screenwriting gig for the Steve Englehart biopic, I’d totally have Macchio quote that first line back to Englehart a decade later when kicking him off the Fantastic Four.)

And here’s the uppercut: 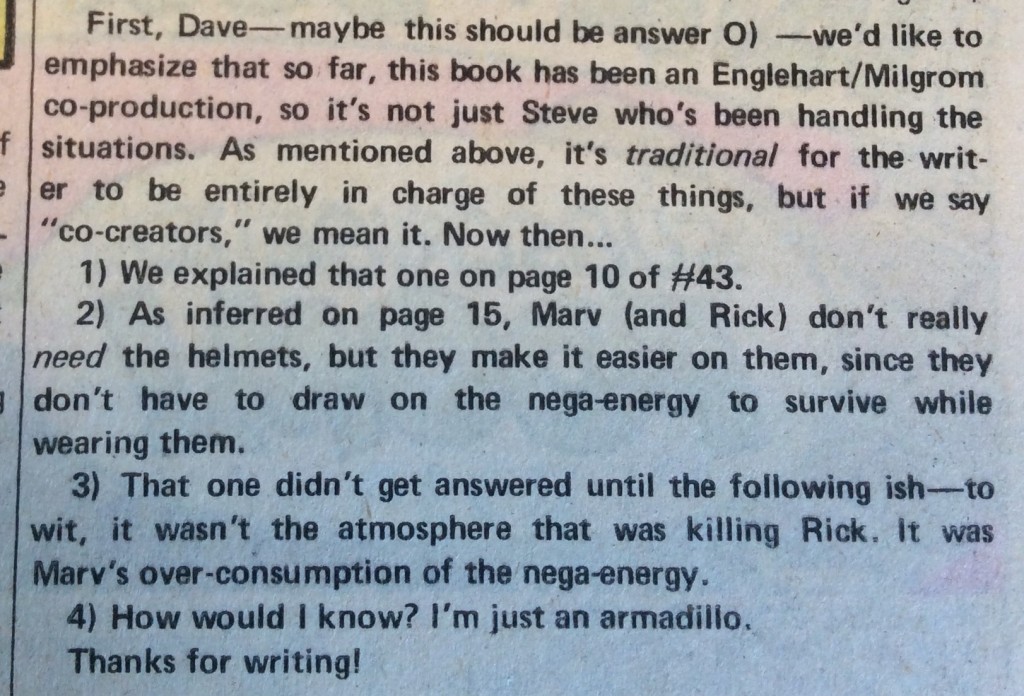 Again, I can’t help but sense a certain je ne sais pass-agg with these responses.   Between the “there’s a time to tighten up” and the “so far, this has been an Englehart/Milgrom co-production,” you’d expect a change to be in the works… and you’d be right.

The change?  Issue #46 is scripted by Chris Claremont. Yes, Englehart’s method of tightening up is to, uh, totally jump ship. (Well, not totally:  according to his website, he co-plotted the final issue with Milgrom.)  I’m as big a Steve Englehart booster as you can get but that’s sad, and maybe doesn’t reflect as well on the man as he apparently thought at the time.

On the other hand, maybe Englehart’s sudden departure from this book comes not from a passive-aggressive bailing on his pal Al but merely from the implosion of his Marvel career.  According to the Comic Book DB page for him, his last issue on CM is the same month as Avengers #150.  The next month, Englehart ends his run on Doctor Strange with the perhaps apt title, “The Dream is Dead!”

So who knows, really?  It probably is worth noting that Englehart and Milgrom re-teamed for a very long run on West Coast Avengers, so either: (a) none of it bothered Milgrom or (b) he put it aside as the years passed.

Maybe we can blame it on the times, times that were indeed coming to a close.  Or maybe there was something about that damned Captain Marvel title that, Starlin-infused lightning in a bottle aside, never quite rose above its trademark swiping origins.  After all, here’s how the letter column in Captain Marvel #46 teases the post-Englehart direction: 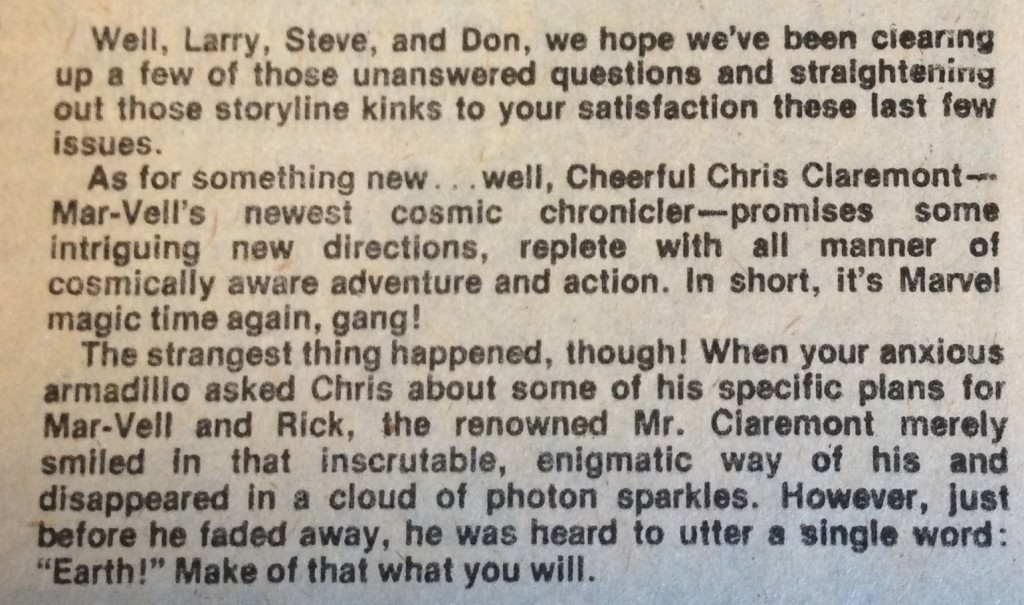 (Claremont goes on to never write another issue of Captain Marvel.)

One comment on ““Al Milgrom Can Boogie With The Best of ‘Em”: Capsule Reviews from Jeff”