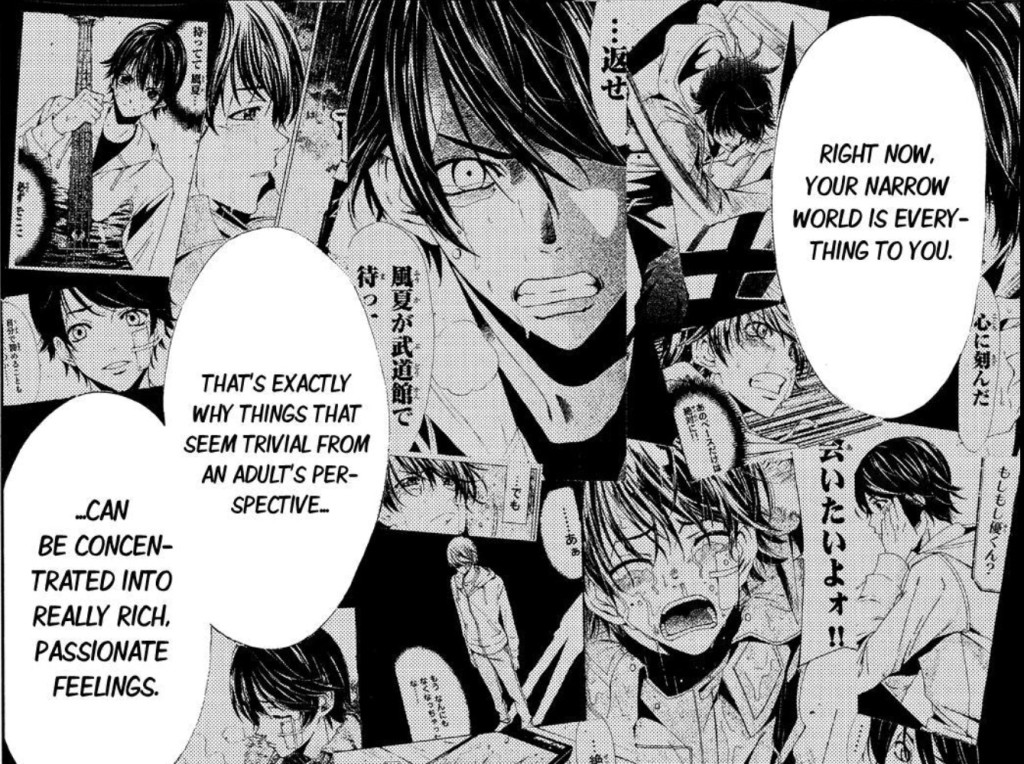 Capsule Reviews!  Time for Jeff to realize it’s Sunday and his larger review isn’t coming together at all and try instead to give you shorter, entertaining things instead!

(Please note: there’s a chance some of what I blab about here also gets blabbed in the upcoming podcast?  I know that’s true in at least one of these cases (but I can’t quite remember which one?).  So apologies for any overlap.

FUUKA (Chapters 52 and 53):  Okay, so the love interest is still dead, the woman with the same name is still off-screen, and Fuuka is still a rock band manga for these two chapters.  In Chapter 52, after completely blowing their big number, the band comes back for the last show of the concert and wins over the concert promoter with their first original number, inspiring the promoter to issue one of those great sweeping generalizations this kind of manga loves to state as a golden rule among insiders:  “[A] truly great concert is one that gets your body moving, even to songs you’ve never heard before!!  That is where songs that sell, and bands that sell, really come from!!”

And then in Chapter 53, Yuu, the protagonist, gets advice from her brother about songwriting who says:  “It’s true that some songs can only be written after your world has expanded and you’ve had more experience…but the opposite is true, too.  Right now your narrow world is everything to you.  That’s exactly why things that seem trivial, from an adult’s perspective…can be concentrated into really rich, passionate feelings.”

Oh, and he also accidentally walks in on his female bandmate as she’s just finished showering:

So, you know, totally formulaic manga?  But also entirely enjoyable?  It’ll be interesting to see if Kouni Seo gets enough of an audience with this track that he can keep at it, or if we’ll end up getting a ghost Fuuka as some fans fear.

THE BLACK HOOD #1: Got this thanks to the last round of Comixology SXSW giveaways, and god damn is it great.  Graeme had talked it up on the podcast, saying that people who liked Bendis’ Daredevil would like this and while I get the comparison—as Graeme also pointed out, Michael Gaydos is drawing (and Kelly Fitzpatrick is coloring) this like he’ll lose the farm if he can’t place first in the Alex Maleev impersonation contest—but writer Duane Swierczynski is serving up something far darker.  After having half his face shot off by a shotgun and accidentally killing The Black Hood in the process, Philadelphia police officer Greg Hettinger’s life falls apart. Descending deeper into isolation and an addiction to painkillers, Hettinger somehow ends up at the end of the issue facing down a gang of thugs in mid-mugging.  How he gets there is somehow utterly convincing, more than a little depressing, and yet still darkly satisfying. 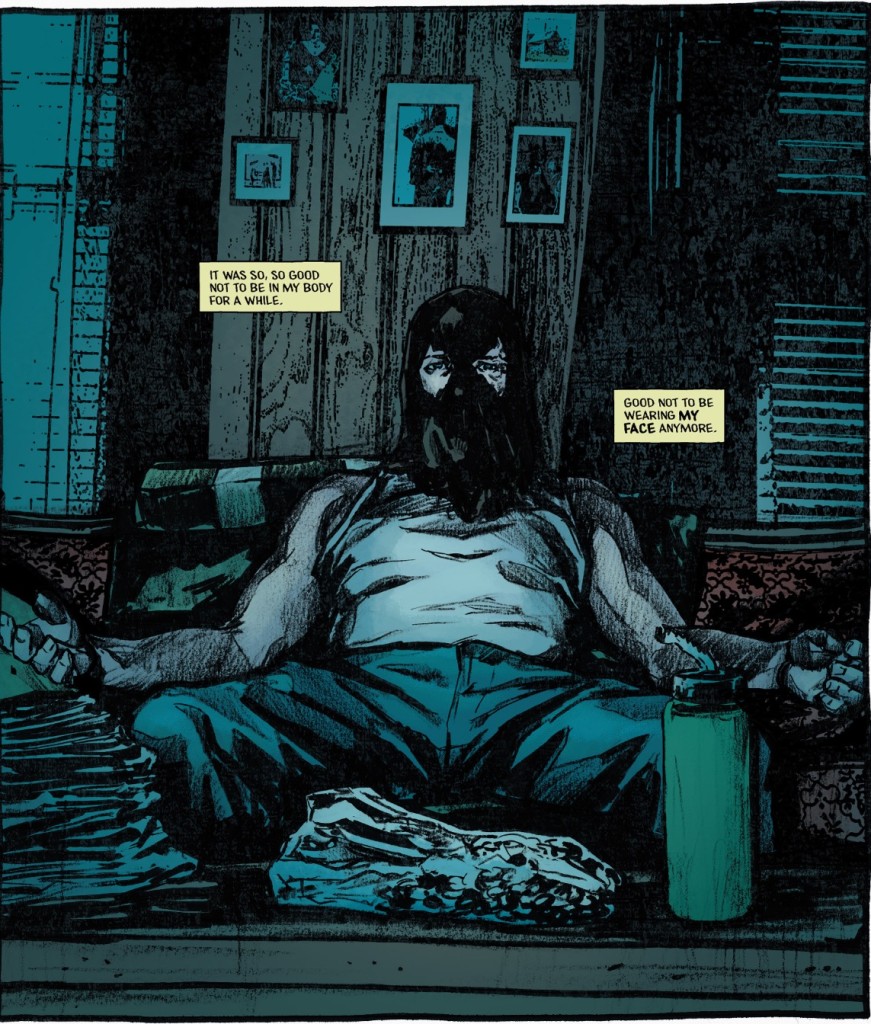 Anyway, god only knows where Swierczynski and Gaydos will take this, but this first issue was a genuine treat, and I’m totally on board.  If you like Brubaker’s and Phillips’ Criminal—or even some of the indie gritcore stuff like Chuck Forsman’s Revenger—you’ll dig this.  Definitely recommended.

Let’s not kid ourselves.  These books are about as much of a celebration as a McDonalds offering a limited-time Mardi Gras burger:  they are first and foremost an excuse on the part of the publisher to make hardcover dollar money.  If you don’t remember that point, you might spend too much time like I did thinking about what the state of today’s world that you get a well-designed, hardcover “celebration” of a gleeful serial killer who is more or less the living embodiment of death.

Anyway, as much as I enjoyed the very early stories where The Joker is just a non-stop killing machine (in his first appearance, he’s more or less killing a person on every other page), the book spends about 87 of its 400 pages on the Joker of the mid-40s and early-50s, the non-lethal Joker of bank sprees and elaborate pranks, and those stories were pretty great, too.

It helps if you’re a fan of the “here’s an impossible thing on the cover; here’s how the story explains it happening” formula DC had going from before its Silver Age:  The Joker captures Batman, so Robin has to help commit crimes to keep Batman alive; Batman and The Joker switch bodies; The Joker inherits a million dollars and quits crime…none of it is quite as good as Bill Finger’s “The Man Behind The Red Hood” which has Batman teaching a college course on criminology and recruiting his class to help solve the crime he never could.  It’s filled with all those great detective-y bits Finger was so good at (one of the students deduces a suicide was actually a murder, just by noting the photo of the victim shows the hand with the gun doesn’t match the shoulder holster) even before you get to the bonus of the stealth Joker origin. 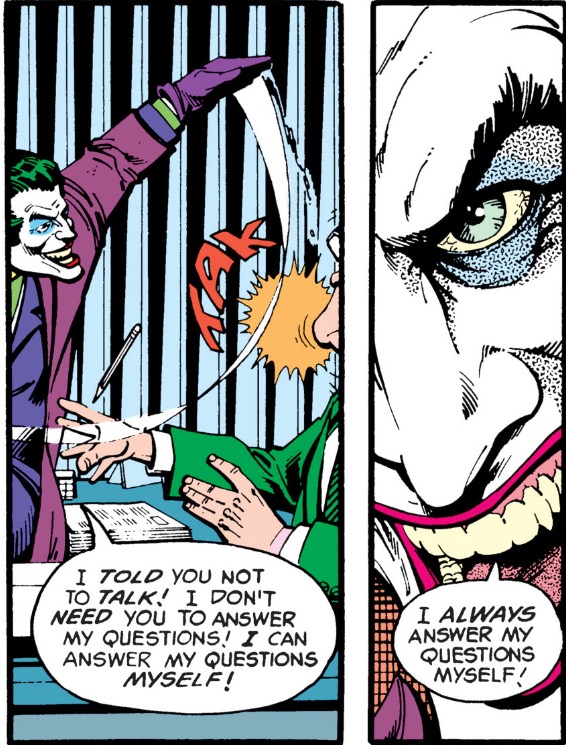 In fact, the book doesn’t get particularly leaden until it hits the modern age and the Joker once again becomes Mr. Death’s green-haired boy:  both the O’Neil/Adams and the Englehart/Rogers stories are fine (and lean heavily on bits from the early Finger/Kane/Robinson material) but Englehart and Rogers are lucky the editors decided to run both parts of their two part Joker story. J.M. DeMatteis and Joe Staton only get the second issue of their four-part “Going Sane” storyline included; and Rucka/Grayson/Scott/Eaglesham only have part 3 of their “Endgame” storyline reprinted in this volume (which is itself part of the “No Man’s Land” event, so have fun with context, casual reader!).  But that’s nothing when compared to Starlin and Aparo’s “Death in The Family”: not only is it just the second issue in the four-part storyline that gets reprinted, it’s not even the whole issue—the first 22 pages of the 44 page issue are left out.

Throw in only part three of Snyder/Capullo’s “Death in the Family” and the first issue of Tony Daniel’s sublimely dumb Detective Comics run, and you’ve got close to 180 pages of incomplete stories, which I imagine I would not be the only person to find more than a little disappointing. There’s an amusing paradox at the heart of this modern section of this collection: the more epic a Joker story creators try to tell, the smaller it feels by the time it hits this book’s procrustean page count.

So desperate are the editors for a halfway decent done-in-one from the modern era that there’s a John Byrne Superman issue in here. Consequently, the two writers in the modern section who come off the best are Chuck Dixon and Paul Dini: Dixon’s Detective Comics #726 (with artist Brian Steelfreeze) is light and flashy—apart from an early double-page early spread, every other page in the story is a full-page splash—but also satisfyingly constructed (good ol’ Chuck Dixon).

And Paul Dini and Don Cramer’s “Slayride” (Detective Comics #826), with Robin helpless in the passenger seat of the Joker’s Christmas hit-and-run spree, is even better. I’d read this story when it first came out and enjoyed it but in this context it doesn’t just hold up, it excels. Unlike the splash on every other page approach, Slayride uses a four tier structure to jam in all its story—the end result feels a little claustrophobic but what else do you want from a story that takes place largely inside a car?

But, still. Considering that, well, of course, you’re not going to get any of Miller’s Dark Knight Returns in here, nor Moore and Bolland’s Killing Joke, and you get a collection that’s like watching a sunset in the days following the destruction of Pompeii: what you’re looking at is the result of world-shaping explosions but you’re not allowed to see any of that directly.  You’re only allowed to look at what’s in front of you and imagine.

3 comments on “I Started A Joke: Jeff Has Capsule Reviews Today”