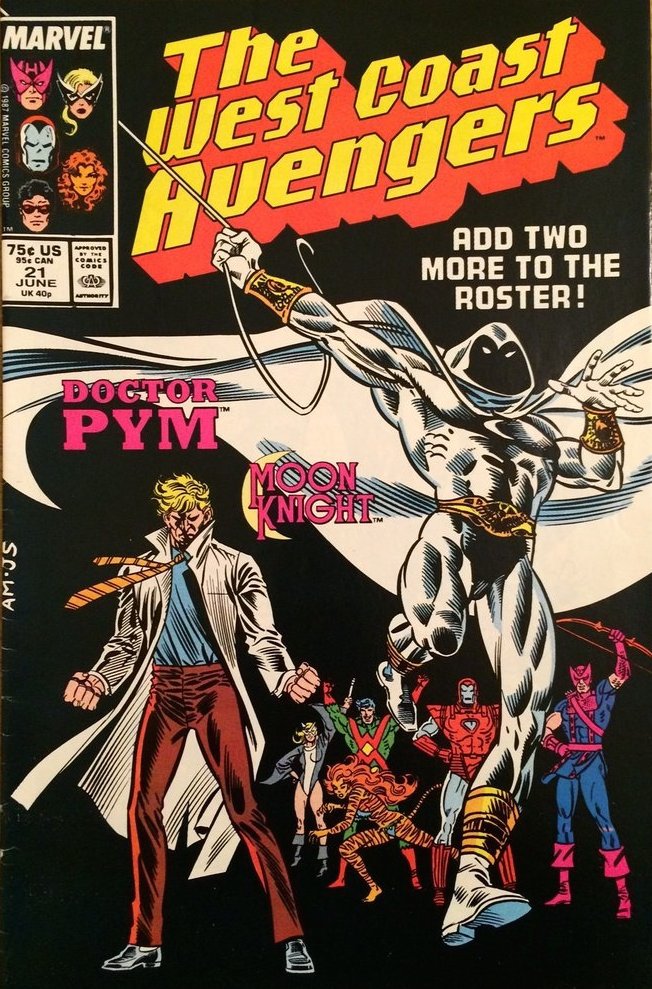 So, I caved; after the discussion about Hank Pym’s character arc in the Roger Stern issues of Avengers — and, specifically, the fact that Stern actually manages to give Hank some closure and, potentially, bring the character himself to an end — I went back to the library to pick up the Steve Englehart West Coast Avengers collections and see just where things went wrong afterwards. Spoilers: It’s at the very tail end of the second collection, and it comes out of nowhere.

Arguably, Englehart’s entire use of Hank is problematic in the first place. Stern leaves the character not only accepting that he’s not a superhero, but essentially writing himself out of that world altogether; it’s implied — but only implied, because you can’t just state this in a 1980s Marvel comic — that the melodrama and hyper-reality of superheroing is what drove him to his breakdown in the first place, because it’s an unrealistic state for… well, normal people to exist in in the first place. By having Hank acknowledges that and not only leave the Avengers but leave the comic book continuity in its entirety, the character accepts responsibility for his actions in a way that’s satisfying for the reader (and Hank himself, to an extent).

So for Hank to show up in the first scene of the first issue of the regular West Coast Avengers title, ostensibly to investigate what’s happening with the villainous Goliath — well, that’s something that feels a little off. Englehart doesn’t ignore what Stern’s done with the character, however; that’s not his style. Instead, we get Hawkeye telling Mockingbird “He’s basically a scientist, and always has been!” as well as pointing out, “I think he really is set on civilian-ness this time!”

That’s certainly the way Englehart plays Hank for a long time. “I meant it when I called playing superhero the biggest mistake of my life!” he tells the Wasp in the first issue. By the third issue, he makes his case for staying on with the team as, as he puts it, “the Higgins to your Magnum, P.I.” by telling Iron Man, “I’m not an Avenger now! I am indeed a scientist, and I spend most of my time playing with equipment anyway… It’s a way for me to contribute, without being something I don’t want to be — since that’s what messed me up before.” If we can ignore the fact that he’s inserted himself back into the world he voluntarily left, this still seems pretty consistent with what Stern laid out.

There’s definitely a reading in here — and I don’t think it’s something that Englehart did consciously, as much as I want to credit him otherwise — where Hank is addicted to superherodom, and is pushing himself right up to the edge of relapsing without realizing it. It’s an idea that arguably fits with the character as we know him, even today, especially given what Englehart does next.

For more than a year, this new status quo for Hank holds up. He gets dragged into adventures because Englehart, and he goes investigating on his own, but throughout the first fifteen issues of the series, he’s still fairly explicit in his disinterest in actually trying to be a hero anymore, and also pretty upbeat about making that decision. There’s even a scene in #13 (my first issue as a reader when the book was coming out, fact fans) where he inner-monologues “He’s lying — and that’s plenty of lead for the Avengers to pick up on! The rough part’s not my job any more!”

It’s all the more surprising, then, when #16 comes along and just flips everything on its head. With no foreshadowing whatsoever, Hank is suddenly self-pitying about his lack of superheroing. “Tiger Shark! One of the goons Egghead used to end my crime fighting career — and I can’t do anything but hang on!” he thinks to himself in one scene; by the end of the issue, he’s staring at the Golden Gate Bridge and thinking about suicide. “Yes… you’d really have to be certain there was nothing left to live for…,” he says, above a garish blurb along the bottom of the page that screams “WHATEVER YOU DO, DO NOT MISS NEXT ISSUE!”

Sure enough, the next issue features a suicidal Hank, thinking things like “I have made a mess of my life! It’s time I stopped hanging onto a world I’ve written myself out of. It’s time I killed myself…” and loading a gun silently before pointing it at his own head. (“He can smell the bullet…” the narration tells us).

Where did this come from? It’s never revealed; instead, his suicide attempt is halted by La Espirita (AKA Firebird, for those writers who don’t want to go near either the Mexican or Christian elements of the character) and spun out into Hank’s becoming a superhero again. We’ll get there in a second, but reading these issues in quick succession, especially after having read Stern’s Avengers issues, there’s more than a slight sense of whiplash going on here.

For those who want to put everything into a “how does this work in-universe” context, you can plug in the idea that Hank has bipolar disorder, and is swinging between a manic episode in the first 15 issues and a depressive one in #16-18, but that’s never made explicit (or, arguably, even implicit) in the comic. Instead, my first thought was that someone — Jim Shooter, perhaps, given my recent re-read of Marvel Comics: The Untold Story and the impression it leaves that Shooter was behind everything bad in Marvel from this particular period — simply stepped in and told Englehart that only superheroes were allowed to be in Avengers comics and so Hank needed to go back on his pledge if he was going to remain in the title.

Sure, Englehart tries his Englehartiest to make it work — there’s something almost Millennium-esque about dialogue like “I was always able to do it! I just didn’t try, because it didn’t seem to have anything to do with super-heroing! But now that I’ve given up the “super” idea, I see many things, differently!” — but the result is ultimately unconvincing. Watching Pym call himself “the scientific adventurer” feels more like Englehart try (and fail) to convince himself and everyone else that Hank’s not lost the development his character has gone through over the last few years, and the way in which his return to herodom is met by the other characters — “I knew you wouldn’t let us down, Avenger!” — lays bare the relief such a devolution would’ve been met by many creators and fans: Phew! Now we don’t have to think that maybe being a superhero isn’t for everyone!

As anyone who’s listened to the podcast for any length of time knows, I’m a massive fan of both Englehart in general and his West Coast Avengers in particular. Re-reading these stories with a focus specifically on Hank Pym, however, lessens that a bit; one of the things I think about with Englehart’s superhero work is the way in which he tries to push the characters forward, even if his idea of forward is problematic and/or misguided (See: Hal and Arisa in Green Lantern Corps). What he does to Hank flies in the face of that, entirely; it’s retrogressive and demolishes what Stern had done building off of the earlier Shooter-devised story. Hank no longer learns anything from the experience, which may perhaps be the reason that the character has become identified by that plot for the last three decades.

Instead of being a turning point, Hank’s abuse (emotional and physical) of his wife and his mental breakdown are pushed back to unresolved issues, and leaving them free to be used again and again. Increasingly, I find myself wishing that Hank had disappeared for good in his final Stern appearance and become a footnote and cautionary tale in Marvel history.