For my birthday a few weeks back, I had a couple of beers and then went longbox diving for random things I vaguely remember that are not available digitally, not least because I could then write posts about them here. This is one of those things.

THE CREATORS: Written by Fabian Nicieza; penciled by Kevin Maguire and inked by Joe Rubenstein; colors by Gloria Vasquez (#1) and Pat Garrahy (#2); and lettered throughout by the great Bob Lappan. Man, do I love Lappan’s lettering over Maguire’s art.

THE CONCEPT: Just as the 21st century started up, DC Comics would publish a self-contained series featuring an exploration of Earth after all the men were killed in a mysterious incident. It is full of fun speculative fiction and a few thoughtful explorations of the concept of a world without men. That series was Y: The Last Man. Two years before that, though, they would publish this limited series, setting the same rough plot in the DC Universe. It is full of, um, pages, mostly. And also depressing prescience.

(Yes, I am aware that neither this series nor Y: The Last Man invented the last-man-alive-in-a-world-of-women concept. It still struck me as odd—and still does!—that DC/Vertigo went to this well twice within two years, albeit in two very different ways.)

Snark aside, the story here is this: Radiation from a cosmic storm kills all the men on Earth. (This happens literally in the turn from page 3 to page 4 of issue #1. This is not a series that spends a lot of time with throat-clearing.) The only known male survivor is Superman; Lex Luthor has also survived in secret, sealed off from the world and working feverishly to understand the cause of the event, and any possible solutions. Also, get this: WOMEN RUN THINGS!!!! LOL!!!! Can you EVEN imagine?!?? 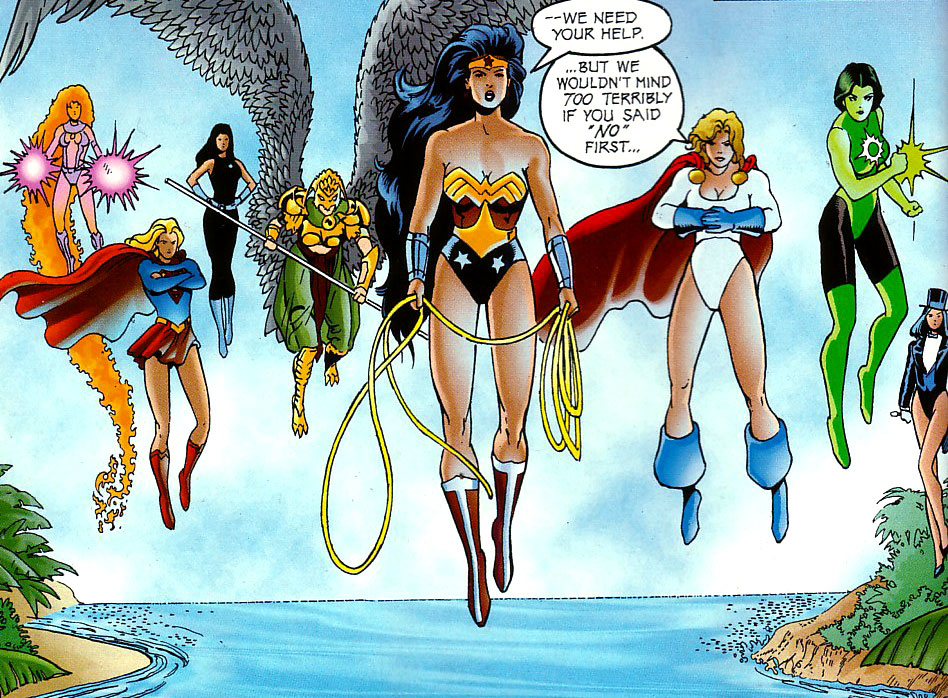 As with so many Elseworld stories, it’s tough to boil down the plot, because what’s really interesting is not the rising action/climax/denouement structure, but what happens to the world as a whole that the story is set in. Here we have the formation (or formalization, I guess) of an all-woman Justice League; the installation of Paradise Island as the capital of the world; the creation and raising of a whole race of Superman babies; and, running through it all, Lex Luthor attempting to complete his Evil Plan to, um, be an enormous asshole. Then there’s a lot of punching and stuff.

I don’t quite remember how this read back in 2000; I know even at the time I wanted it to be something else—something more like what Y: The Last Man would wind up being, actually—but I know it reads very differently now. In the age of Trump and of RedPillers and of GamerGate, when we see the noxious villainspeak from this series online every single day passing as interpersonal discourse, there’s a weird and hugely depressing prescience about the whole thing. It’s like Nicieza correctly identified the worst traits in male nerd culture—and especially white male nerd culture—but assumed that would OBVIOUSLY be the purview of villains, not of, you know, a whole bunch of everyday people.

Again, I know we had seen this before, a lot of times—there’s a lot of the then-out-of-print-and-semi-legendary Alan Moore Miracleman in here, in a watered-down version processed through Nicieza’s uniquely 1990’s filters—but, I mean…

Look, what happens in the back two-thirds of this story is that, after Superman knocks up Lois, Luthor emerges from hiding to reveal that Superman himself is a danger to any potential male birth. (Blah blah blah his Kryptonian cells stored the cosmic energy blah blah blah whatever.) Superman, as he tends to do in such situations, exiles himself from Earth to search the spaceways for something or another. But he leaves behind what Hippolyta calls “the gift of hope,” which I guess is a big ol’ jar of what we’ll euphemistically call Superman’s “genetic material,” so that they can repopulate the Earth. 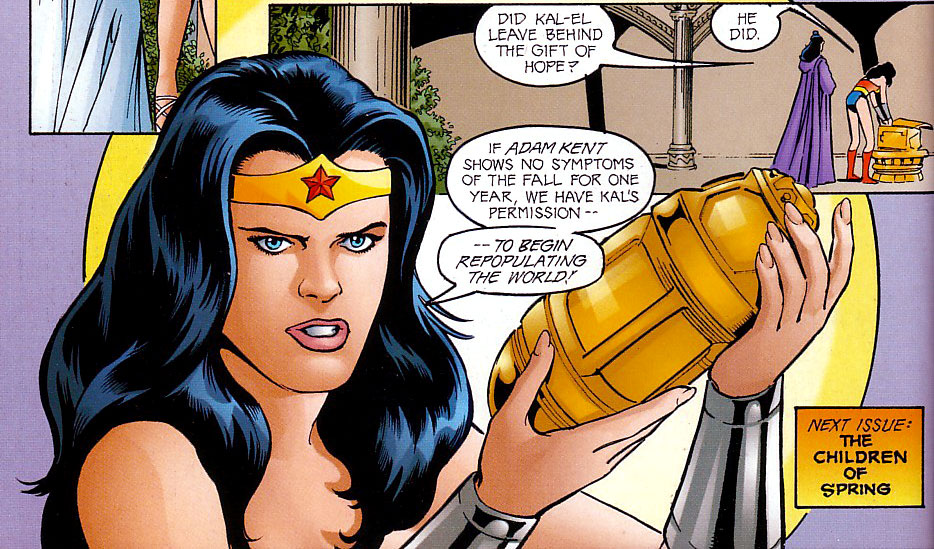 (That’s the end of issue #1. Let that sink in for a minute: the cliffhanger of the first part of this series is Wonder Woman holding a huge jar of super-sperm. “The gift of hope.” Good lord, this book.)

ANYWAY, the kids all have powers and the Amazons and try to raise them smartly, but Luthor brainwashes them and uses captive psychics to poison their hormonal teenage brains (we’ve flashed forward a bit) and turn them eeeeeeeeeevil, and they attack their caregivers and, I dunno, a bunch of other stuff happens and in the end Superman returns and the kids are ostensibly redeemed and the story eventually ends.

My point is: the climactic battle in this book is a megalomaniacal 1980’s-style businessman marshalling the seething, stupid rage of angry teenage white boys against a world run by a diverse group of women. It is a LITTLE BIT of a tough read in 2017, is what I’m saying. 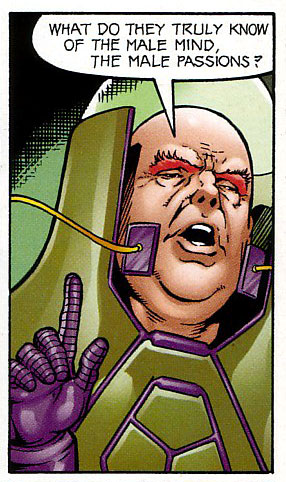 Here, try to guess if the following quotes are lines of dialogue from this series or angry screeds from 4chan and Twitter:

It’s a dumb trick question, of course. They’re all from the book. So…yeah.

(I want to be very clear: this worldview is definitely portrayed as nasty and unpleasant and evil and generally un-good. I am ascribing the above sentiments neither to Nicieza nor to any sympathetic character in the story. It’s just not exactly the fun, light-hearted read I tend to hope for from a Kevin Maguire-drawn book.) 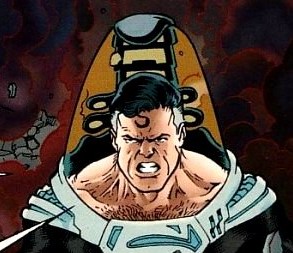 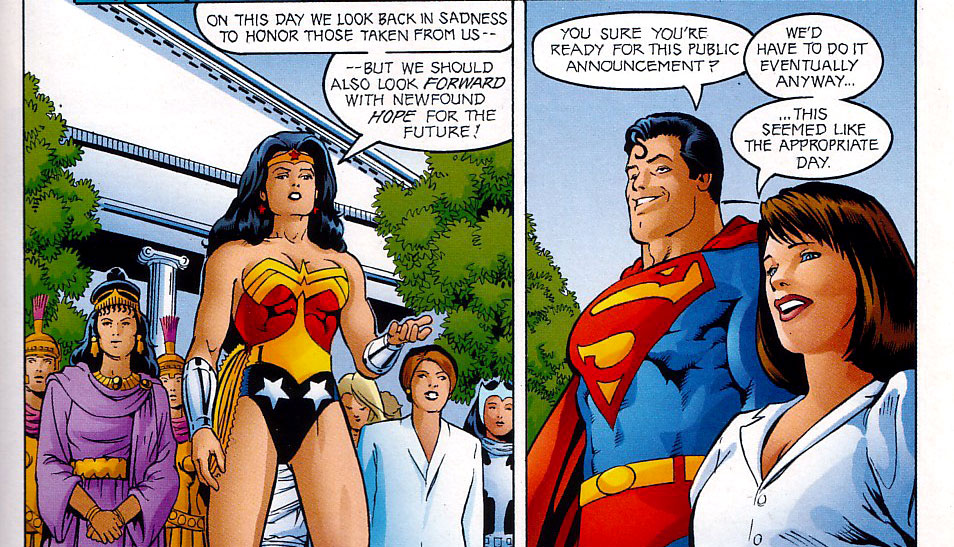 SHOULD IT BE ONLINE: Ugh, I dunno. I guess so? Maybe I’m just too square to enjoy it or something, and if it were online everyone could find out for themselves? I’m definitely not planning on returning to it anytime soon, though. 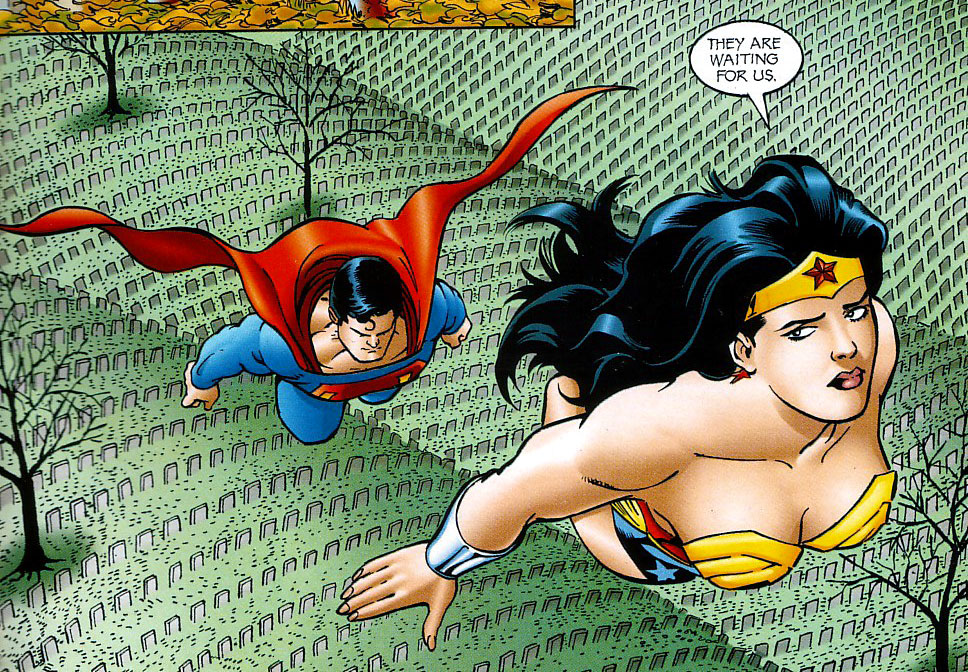