For my birthday a couple months back, I went longbox diving for random things that are not available digitally, not least because I could then write posts about them here. This is one of those things.

THE BOOK:  Essential Punisher Volume 2, a massive black-and-white phonebook sized reprinting of the first twenty issues of the 1987 Punisher ongoing series, along with Annual #1 and Daredevil #357.

THE CREATORS: Written primarily by Mike Baron; the murderer’s row of art teams includes Klaus Janson, David Ross & Kevin Nowlan, David Ross & John Beatty, Whilce Portacio & Scott Williams, Larry Stroman & Randy Emberlin, and Shea Anton Pensa & Gerry Talaoc; and lettering is primarily by the underrated Ken Bruzenak, with occasional issues from Bill Oakley, Jim Novak, and the immortal Tom Orzechowski. The one exception to all of the above is the Daredevil issue, which is written by Ann Nocenti, drawn by John Romita, Jr. & Al Williamson, and lettered by Joe Rosen.

THE CONCEPT: On the heels of a successful 1986 miniseries that turned Frank Castle from an intermittent guest-starring vigilante into a super-popular antihero, Marvel made the logical business decision of launching an ongoing solo book. This could’ve gone in any number of directions, as the character was still remarkably inchoate. What writer Mike Baron appears to have largely settled on is an overt, conscious attempt at catching the spirit of the era’s action movies. But instead of making Castle a quippy Stallone or Schwarzenegger type, Baron channels the zeitgeisty weirdness behind Bernie Goetz’s 1984 vigilante subway shooting and the Punisher’s ’70s-era Charles Bronson-ish roots. And then he tries to find a way to sustain it indefinitely.

The result is basically the entire “Action” shelf from a circa-1987 Erol’s video store pureed into a fine paste and extruded as a comic book.

The first five issues of the book lean the hardest on 70’s grit, which is perhaps inevitable when Klaus Janson—fresh off the wild success of the self-consciously grimdark urbanism of The Dark Knight Returns—is providing the art. Castle starts off by tackling the drug trade in New York City, then follows it to its source in Bolivia. From there he tries to take a break and winds up fighting white supremacists (sounding depressingly contemporary, to be honest) in Missouri. Janson wraps with two issues of the Punisher vs. a fundamentalist movement led by a charismatic maybe-mutant called The Rev, thus completing a quick initial tour of America’s bogeymen circa 1987: drugs, racists, and crooked fundamentalists (but maybe also just regular fundamentalists too, who really knows).

Janson leaves the book and is replaced for two issues by David Ross. Ross has been a journeyman mainstream comic artist for three decades now, doing solid but largely unremarkable work on a whole bunch of things. If you’re reading this, you’ve probably read a book that he’s drawn, whether you know it or not. In his two-issue stint here, he’s inked by two wildly disparate people, which has the odd knock-on effect of making it obvious just how loose his pencils must be. Because issue #7, inked by John Beatty, looks an awful lot like Mike Zeck (who was frequently inked by Beatty). And issue #6, inked by Kevin Nowlan, looks an awful lot like Kevin Nowlan, and it is glorious.

Whilce Portacio and Scott Williams come on as the regular art team just in time for the Punisher to fight the most feared 1980’s scourge of all: ninjas. (Kind of. Ninja-esque dudes in masks with swords, anyway.)

This is also just about the point where someone—Baron, or the editor, or Marvel corporate—decides that Frank Castle needs to be a little more tied into the Marvel Universe. First he fights—and crosses over with—Daredevil, and it is the ur-text for every “YOU’RE A KILLER, FRANK! JUSTICE AND CATHOLICISM!” argument those two have had since.

Then, spinning out of a storyline that sends Frank Castle undercover as a substitute teacher (probably inspired by Jim Belushi’s The Principal, although it’s also echoed pretty hard in  Tom Berenger’s The Substitute, which it predates by a few years), Castle winds up assembling a team to take down the Kingpin. (The Kingpin is…funding terrorists to…blow up an inner city school…because…reasons, I guess?)

The Punisher’s squad could not be stocked with more 1980s action movie archetypes if it was actively trying: the black guy is another teacher at the school (and would probably be played by Carl Weathers, although it owes a debt to Lou Gossett Jr.’s character in The Principal); the Latina woman is the widow of a mercenary who got killed on a mission with Castle (Maria Conchita Alonso, duh); there’s the punk kid who brings a gun to school but really wants to learn (Christian Slater, maybe?); and Punisher (Dolph Lundgren, of course) and Microchip (George Wendt, I guess?).

This six issue story-arc is probably the most out-and-out fun to be had in this book, even if almost everyone in the story dies, generally alone and horribly. But, hey, that’s how it goes for the racially diverse supporting cast in an eighties action movie! Just ask the dudes in Predator. (Also, between the Daredevil story and this one, Frank Castle also manages to kill a not-at-all-thinly-veiled Charles Manson, because if there is one actual, human-ish face to the bogeyman of the 20th century, it’s probably got a swastika carved between its eyes.)

Portacio departs after the Kingpin arc—unless I’m forgetting the timeline completely, he’s heading off to the far greener pastures of the X-Men books—and the last two issues collected here feel like inventory stories at best: guest artists, including an all-but-unrecognizable Larry Stroman, done-in-one plots, and a general wheel-spinning feeling of meaninglessness.

This is also unquestionably the most problematic-in-hindsight portion of this often-problematic collection, as the final story has the Punisher killing a man who spends the entire story dressed as a woman. It’s played as a Hitchcockian WHO COULDA PREDICTED IT twist, but it feels hellaciously unpleasant as the final story in a collection whose throughline has been, as I keep noting, the Punisher killing the things people feared in the eighties. (The issue before it features the Punisher going to Australia to kill people, because Crocodile Dundee also haunted the eighties.)

It’s an unfortunate, unpleasant note to end on, but the book was spinning wildly off the rails at this point in its publication history. It was the classic Marvel recipe for disaster, flooding the market with titles without sufficient story to fill them, long after the character’s popularity had begun to wane. After this, the Punisher would fight lots of ninjas and Dr. Doom, before the book started to descend into total insanity, and this stupid, ill-advised, nasty-in-hindsight issue feels like the start of that plummet.

What this volume represents, then, is the one sustained stretch of true novelty for the Punisher as a solo character. Even if only as a historical artifact, it’s a fascinating read. 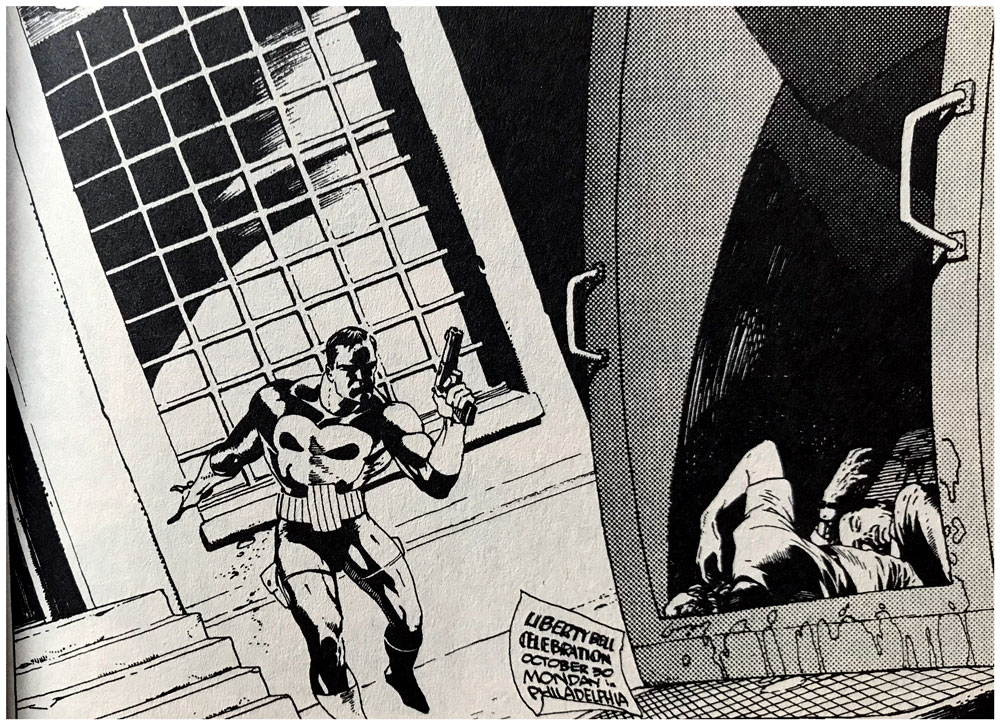 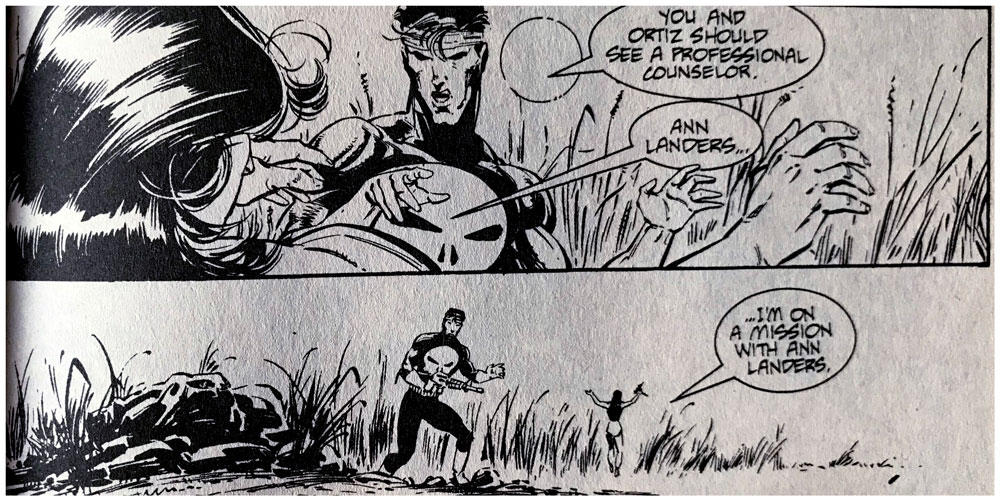 SHOULD IT BE ONLINE: Yeah, it probably should. It’s formative work on one of Marvel’s most popular characters, featuring (if nothing else) some great art that deserves to be appreciated. But what it really should be is available as a series of cheap little B&W paperbacks, like graphic novel equivalents to The Executioner books. That’s the level it’s operating at, and that’s the packaging in which I think it should probably be preserved. 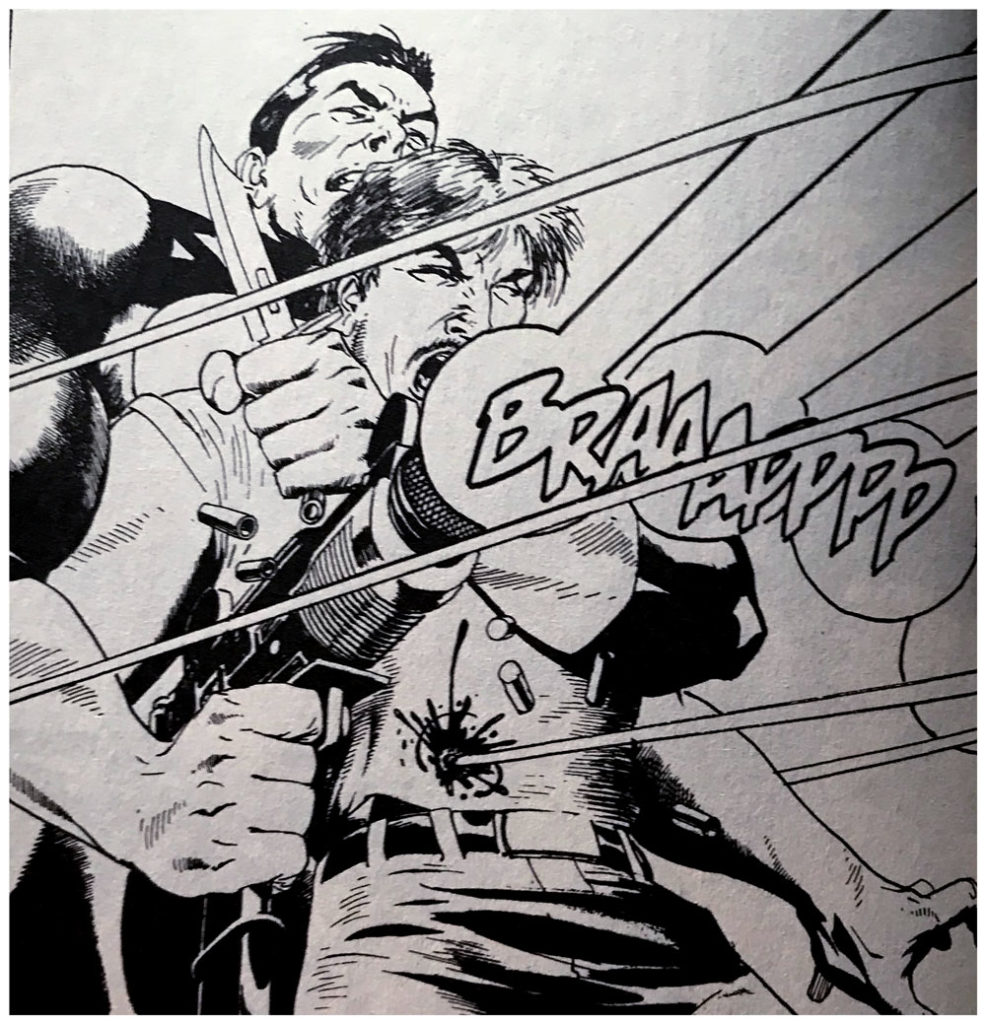