Previously on Baxter Building: We’re in the waning days of Stan Lee and Jack Kirby’s classic run on the Fantastic Four, with the invention and verve of the title’s salad days being slowly replaced by repetition and the sense that neither creator is that invested in the title anymore, choosing to bring back familiar faces instead of come up with something new. But could that be about to change…? 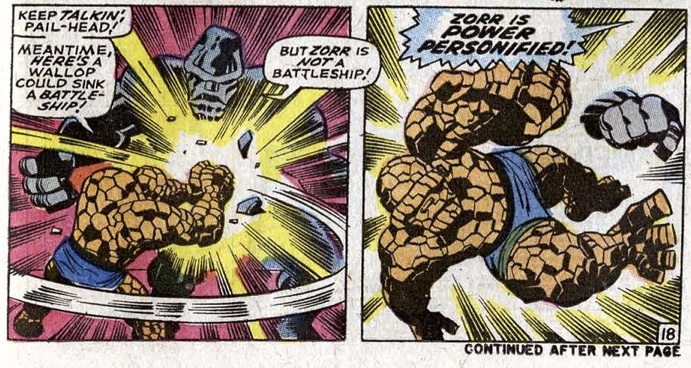 (Programming note: Marvel Unlimited, where I usually grab the images for the show notes, is down as I write, so I’m using the GIT Corp DVD collection instead — which means some ugly MARVEL watermarks in places. All apologies.)

0:00:00-0:01:49: “There are only three stories this time, so we might be able to do this one relatively quickly,” I say in an unusually optimistic mood about this episode, in which we cover Fantastic Four #82-87 and Annual #6. Spoilers: We don’t, but I’m sure that’s not a surprise to anyone other than Jeff and myself. 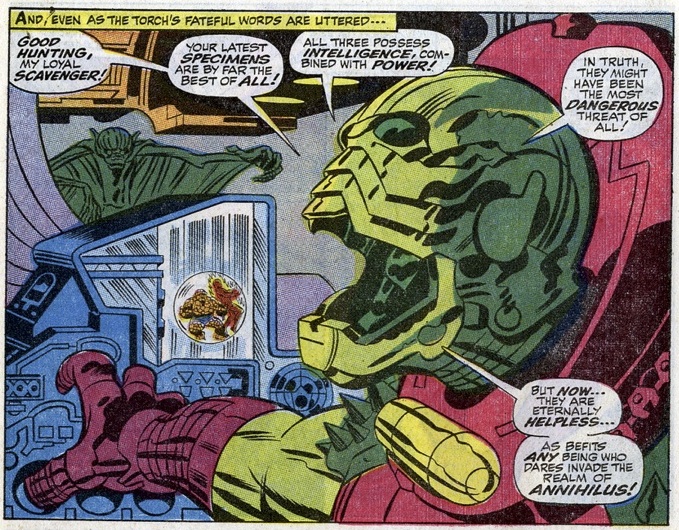 0:01:50-0:26:47: The smoothest segue in podcast history brings us quickly to Fantastic Four Annual #6, of which Jeff says in a seemingly accidental pun, “there’s a lot of fantastic stuff in here.” And there is, including the birth of Reed and Sue’s son, a return to the Negative Zone, the first appearance of Annihilus, and some wonderful Kirby art. Lots of fun questions are thrown up as we read through it, including: Is Reed Richards a lying heel? Are Lee and Kirby pulling a Jungian riff (including a demonic villain)? Did Jeff somehow know that he’d be making a reference to this weekend’s Doctor Who by referencing the Fisher King? Also, find out the alternative title for Baxter Building, named after these gentle creatures: 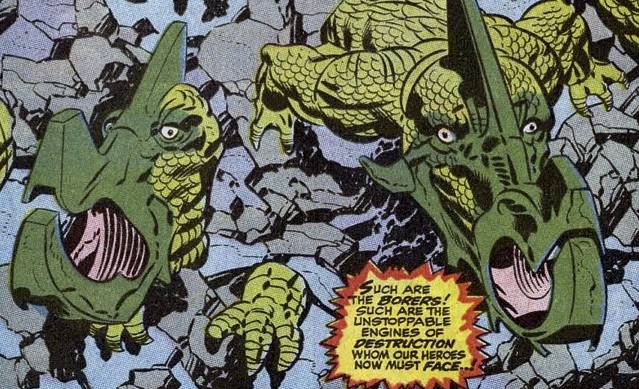 0:26:48-0:39:02: The Inhumans return in FF #82, and bring with them their race of cloned slaves, something that (quite rightfully, I think) manages to freak both Jeff and myself out horribly. That said, the name “Alpha Primitives” really is something else. But things get better when we run into Zorr, the new character find of 1968, and also a surprising glimpse at the Beyonder’s aesthetic, more than a decade early. Meanwhile, Maximus the Mad is back to disappoint us all in his generic villainy, and we get introduced to the wonders of hypnosis, which Jeff uses to pivot into one of two Stan Lee/Jack Kirby relationship metaphors this episode. 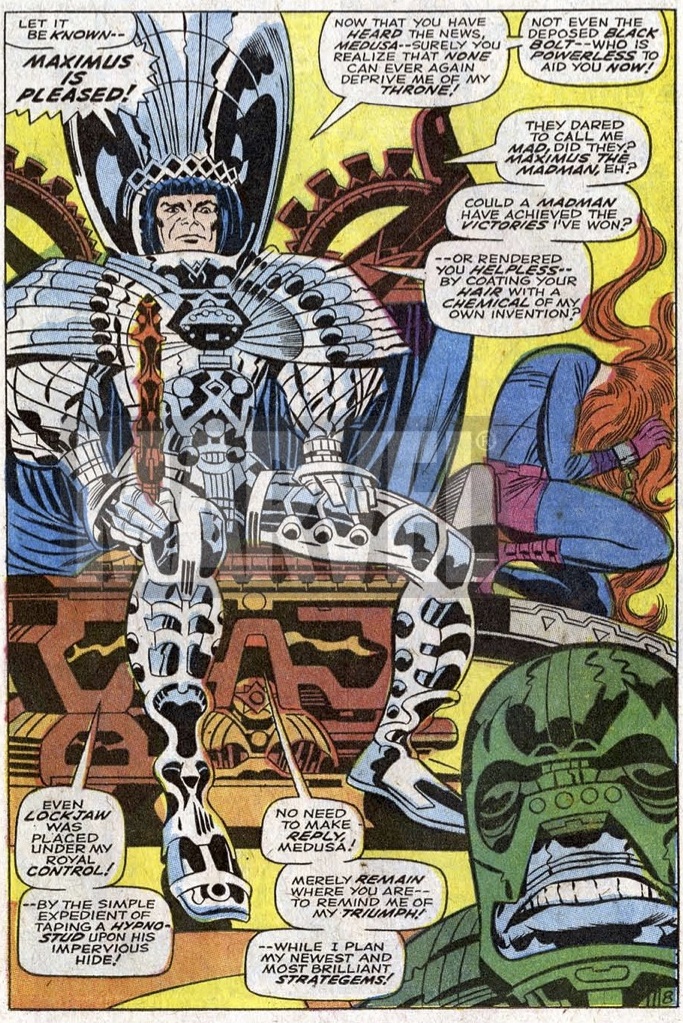 0:39:03-0:59:51: Just the title of Fantastic Four #85 — “Shall Man Survive?” — is enough to make both of us to discuss the possibility of a holiday special Baxter Building for our Patreon supporters, but even that can’t distract us from Reed Richards’ true superpower: Knowing things that he really has no ability to know, purely because Stan Lee wants Reed to be the smartest guy in the room. Also, if Zorr won your hearts in the previous issue, then wait until you meet Maximus’s new henchmen. Jeff isn’t a fan, but I genuinely see them as the forerunners for the New Gods, so they have more than a little borrowed cool. While we’re talking New Gods, Jeff sees this image as the birth of Darkseid: 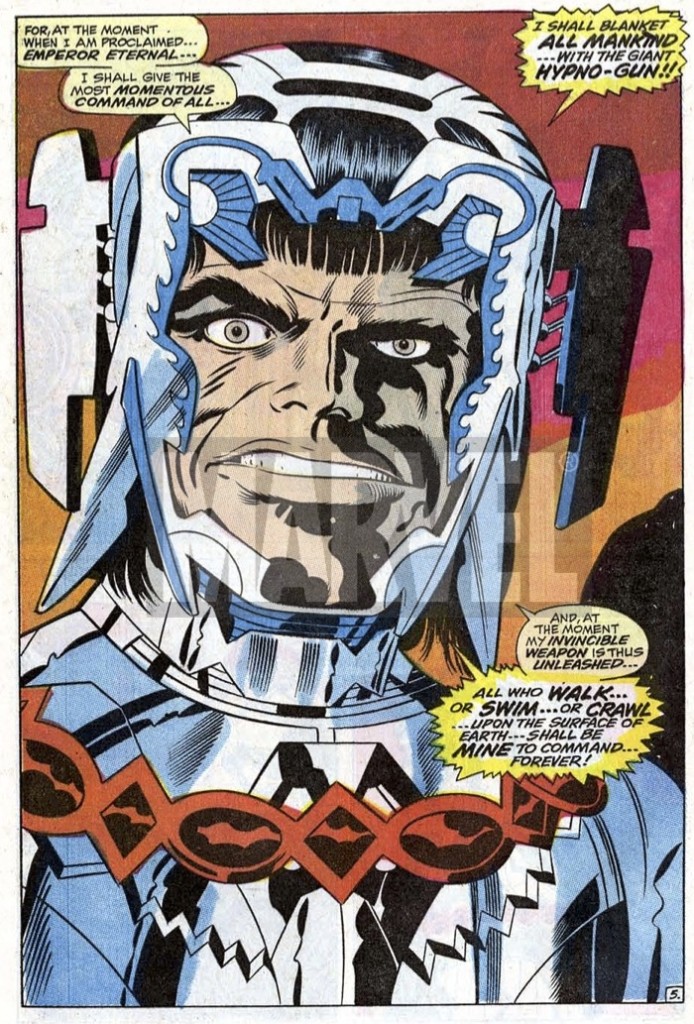 But that’s enough about Kirby! We also talk about the ways in which Lee’s dialogue makes up for some ropey plotting, and having seemingly learned when to shut up. And, for all we (rightfully) give Lee and Kirby shit for their flawed endings in this episode, the denouement here is actually kind of great — not least of all because it lets us all realize that Karnak is actually a kung-fu C3-PO. Just really.
0:59:52-1:03:16: We wrap up the arc by talking about the evolution of Kirby as a plotter and, especially, a penciler — the ways in which both his page layout and sense of pacing have evolved, as well as his linework — and also being thankful for the surprising uptick in quality in this batch of issues compared with what we’ve been reading through in the last couple of issues. 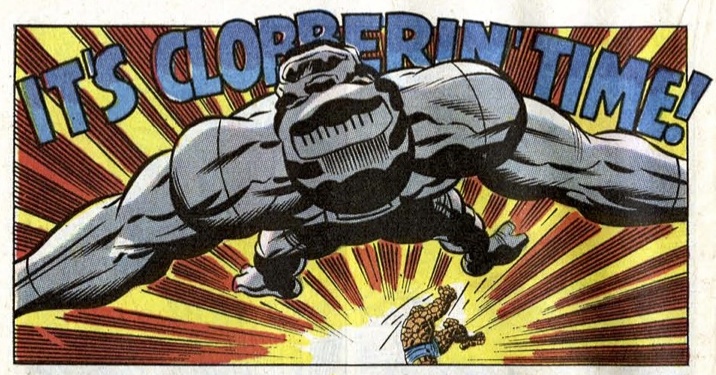 1:03:17-1:10:43: “We really are speeding through this, this week,” I say, entirely deluding myself as we move into the four-part Doctor Doom story that runs through Fantastic Four #84-87. As I try to make the argument that this arc — Lee and Kirby’s last major Doom arc on the series — is the definitive Doom story, Jeff hums and haws about my reasoning. (Anytime he says, “Well, let me tell you, Graeme,” you can tell that he both has a theory, and it’s a different one from the one I’ve been talking about). Is this where the Lee and Kirby relationship breaks down entirely, as Jeff argues, and is it all Patrick McGoohan’s fault? 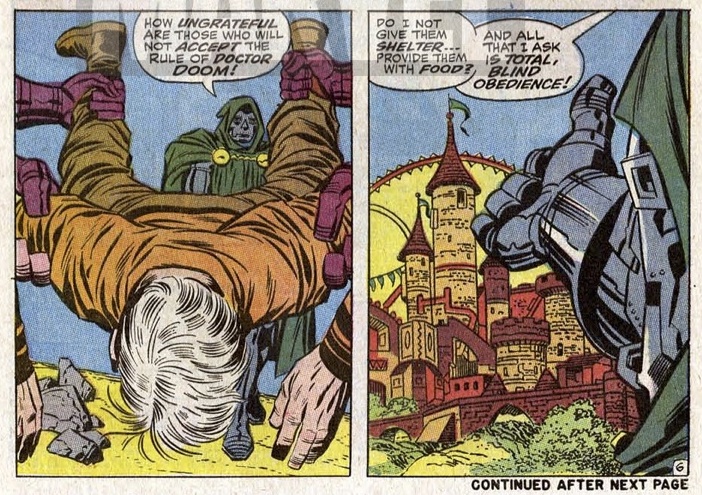 1:10:44-1:18:20: FF #84 features some prime Doom — “Have I not told you how I dearly love my subjects?” indeed — and also proof that SHIELD are terrible at strategy (or, perhaps, just don’t care about superheroes that much). Lee and Kirby are on fire in this issue, which really just makes the disappointment of the way this arc finishes all the greater. That said, you might find yourself tempted to visit Latveria for a holiday; who wouldn’t want to be woken up by glockenspiel?
1:18:21-1:33:59: “This is where some of the plotting gets very, very screwball,” says Jeff of Fantastic Four #85, which is being polite. While Doom continues to be the highlight of the story this issue, we also get more hypnosis (and more explanations from Reed that he has no way of actually knowing beyond Stan Lee’s desire for Reed to know everything), a cutaway to a space mushroom house, and the introduction of two characters who’ll go on to be very, very important over the next couple of issues. Although one will gain some hair in the process. It’s probably best if you don’t think about that too much. 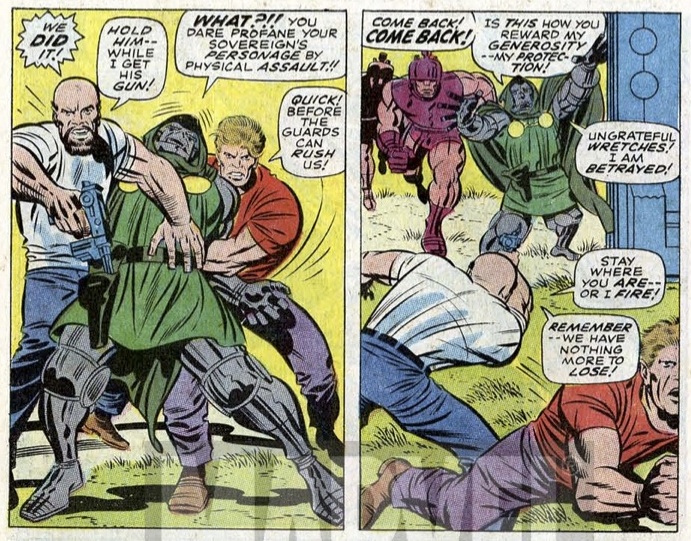 1:34:00-1:45:53: Despite the fact that both Jeff and I really love the title of FF #86 — “The Victims” — we both agree that this is where the story really breaks down, with Jeff suggesting that that’s down to a collapse of empathy between Kirby and Lee on a very basic level, because Kirby is processing WWII trauma in a way that Lee would never be able to understand. Is Kirby working through Vietnam-era anti-war sentiment in a particularly coded way that even his collaborator can’t understand fully? We start slipping into what happens in the subsequent issue as we consider alternate plots to what actually unfolds on the page here, before talking about the populist response to being attacked by killer robots and being defended by some superheroes from another country. Also, when it a nuke not a nuke? Probably when Jeff and I talk about a bomb being a nuclear bomb, even through, despite what I say in the podcast, it’s clearly referred to as “tons of nitroglycerine” in the comic itself. Sorry, all. (And sorry for the very, very loud barking dogs towards the end of this section, too; someone was visiting and the dogs wanted to say hello.)

1:45:54-2:03:34: Things get very strange in Fantastic Four #87, as Doom introduces both the concept of Hypersound and the importance of a well-prepared meal in Latverian culture. In what could be considered a damning critique of toxic masculinity, the fighting males of the FF achieve nothing while the gentlemanly Doom dines with Crystal and Sue before siding with culture over tribalism — although, really, that’s not what the intent was at all. Jeff has a theory about what was going on behind the scenes (that it’s all about the respect paid to the artist, instead of that paid to the company man) that I don’t quite agree with because I’m not convinced that opportunist ex-Nazis really count as company men, per se. Did Lee know just how badly this issue wraps up the four issue storyline, and try to let fans in on the potential letdown with the cover blurb? I suggest that very thing, while Jeff talks about the ways in which #85 doesn’t manage to close out the storyline to anyone’s satisfaction. Apologies to The Jack Kirby Collector for me misremembering its title as The Jack Kirby Quarterly, by the way. 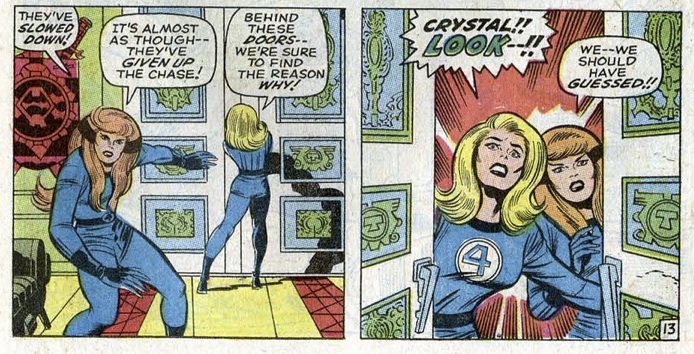 2:03:35-end: Next time on Baxter Building: #88-94! And it’ll be a week late, because we’re taking part in a nine-part podcast crossover event called Secret Convergence on Infinite Podcasts throughout November! Yes, that’s a link to the Tumblr that I couldn’t remember on the show itself (And here’s the Twitter for the event, which we do reference). We also take the opportunity to remind you of our Twitter, Tumblr and Patreon hangouts on this there Internet, because that’s what we do as we close out each episode. Wait, What? returns in two weeks, and Baxter Building will be back in a little over a month. Thank you all for listening and reading, Whatnauts.