Previously on Baxter Building: We’ve pretty much worked our way through the truly classic Jack Kirby/Stan Lee run, with Inhumans, Black Panther, Galactus and the Silver Surfer and even Him all making their debuts. Sadly, that means that we’re now onto the slow decline of the title, which is going to last… for awhile. But don’t worry; it’ll all look better in comparison to what we’re starting off this episode discussing…! 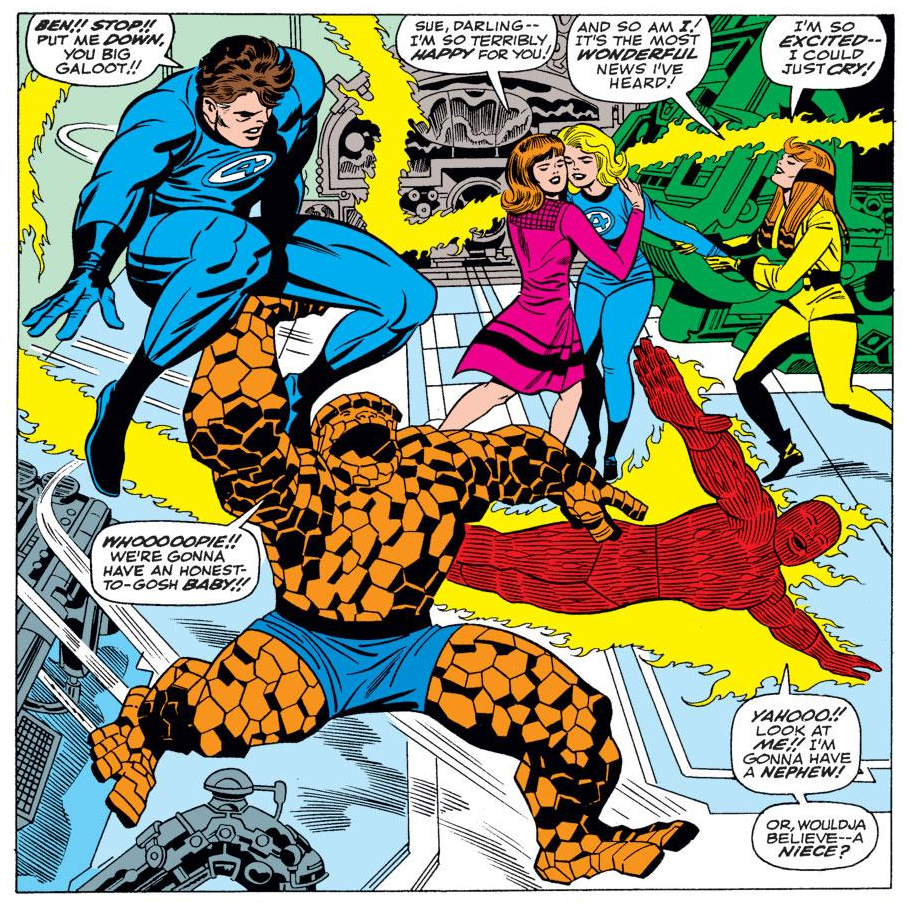 0:00:00-0:56:33: Our attempt at a cold open doesn’t really work, because Jeff had just returned from seeing the Fantastic Four movie, and so we end up talking about it pretty immediately. (We’re also talking about Fantastic Four #68-73 and Annual #5, but that doesn’t start until the 56:34 mark. For those who’re concerned about spoilers for the movie, jump to that point!) “Although I was pretty aware that this wasn’t a good movie, I found it a really, deeply interesting, oh, I could see how this maybe could’ve worked, oh, here are two or three things that are really interesting but are so far from the spirit of at least the later Fantastic Four comics [movie],” Jeff says at one point and, really, that’s pretty much the way we both felt about it. It’s not good, but it’s certainly not dull. Plenty of things under discussion in this chunk, including the ways in which the movie isn’t true to its characters or even itself, with scenes that would be obviously missing even if we hadn’t seen a bunch of them in the trailers for the movie. Also: Jeff comes up with the ways in which the movie might have worked had director Josh Trank been left to do his stuff (I reference this Hollywood Reporter story a bunch, in relation to the Trank/Fox tussles), the miscasting of Miles Teller, the waste of Michael B. Jordan, and why two random kids and Jeff’s wife Edi would make better movie reviewers than the two of us. I apologize for nothing when it comes to “Victor Von Boom,” however.

Look at all these scenes that aren’t in the finished movie! 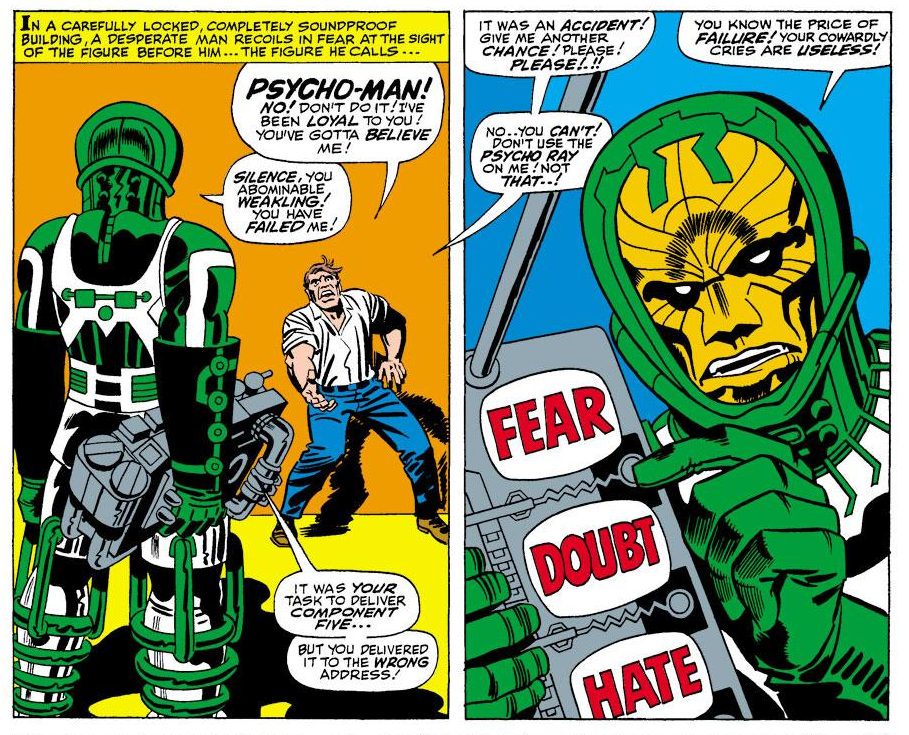 0:56:34-1:20:49: We start on the comic books with Fantastic Four Annual #5, which is certainly the best of the bunch this time around, in no small reason because of the debut of Psycho-Man — arguably the last great character creation from the Lee/Kirby run, and certainly one of Kirby’s best designs from the entire run — as well as three of the greatest minions you’ll see. Do we focus on them, though? Nowhere near enough, because we’re more concerned with Sue Richards’ pregnancy and the ways in which Stan Lee and Jack Kirby are moving out of creative synch again. Also: how bad is Stan Lee’s memory that he can’t remember the name of his own Macguffin across seven pages, quite how do Psycho-Man’s powers work, and just how coincidental can a plot be before we call shenanigans? (Spoilers: Apparently very, very coincidental.) 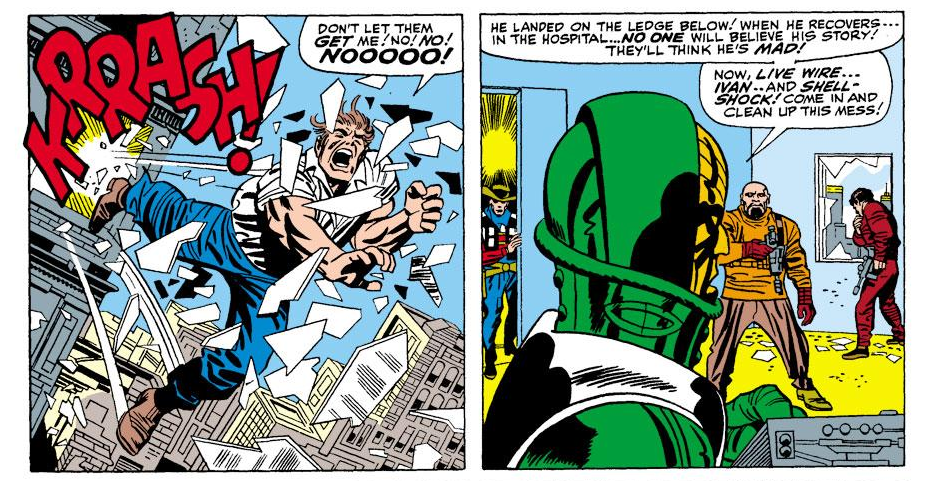 1:20:50-1:28:27: Annual #5 doesn’t just have the Psycho-Man story; there are also two back-up stories, including “This Is A Plot?” which gives an inside look at the Lee/Kirby relationship, as seen by Kirby. (Also, me utterly misremembering the story of it despite having only read it days earlier — always a sign of a memorable story; thankfully, Jeff’s on it.) Also, if you’ve been wondering when Roy Thomas would make his first appearance in Kirby’s work, you might be nearly as excited as Jeff here. There’s also a Silver Surfer short that we don’t spend a lot of time on, for obvious reasons. 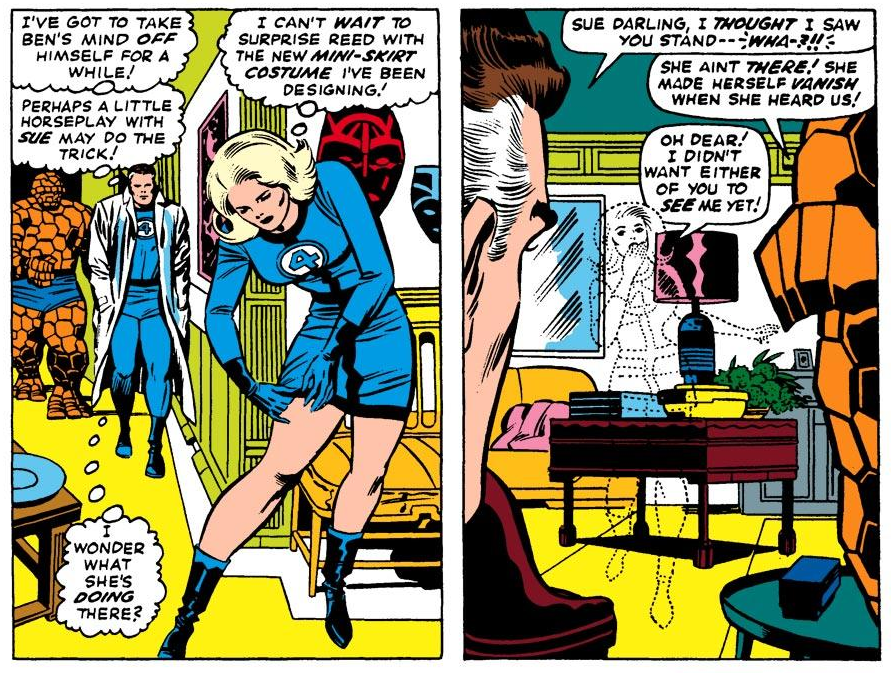 1:28:28-1:41:45: Holy deja vu, Whatnauts: Fantastic Four #68 starts a serious lull of the series, and it does so by… surreally rehashing a storyline that happened less than two years earlier (We talk about the fact that you couldn’t really do that kind of thing these days). On the plus side, we get a great (and, sadly, temporary) new look for the Invisible Girl and one of the greatest pages in comics history ever: 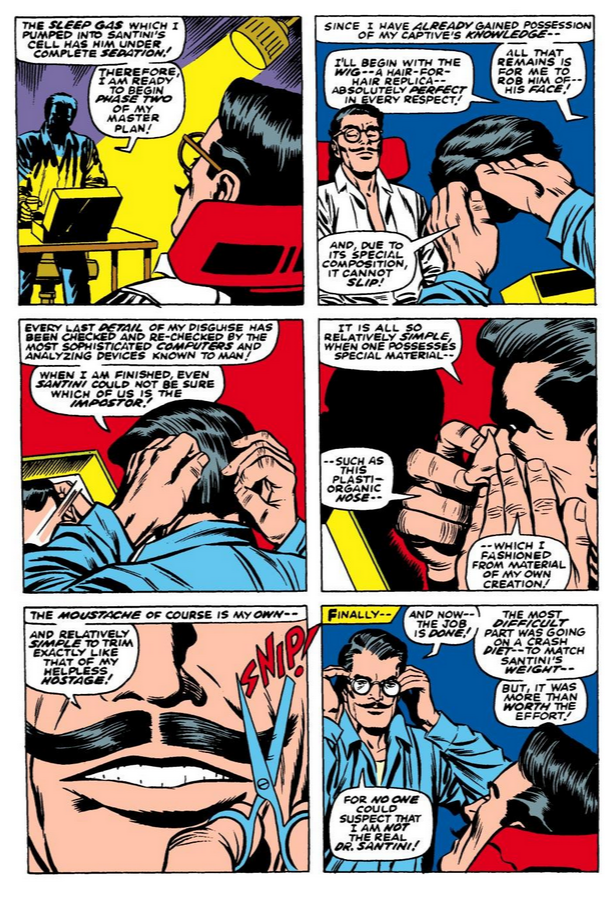 I promise, it’s all downhill from here on. No, really. Even the existence of a scene which proves that Stan Lee should have never written teen dialogue doesn’t match up to that wonderfulness, even though it appears to magically predict Grease.
1:41:46-1:49:09: “By Ben Betrayed!” is the title of #69, and maybe it’s an allusion to the fact that it’s the readers who are getting betrayed by this impressively throwaway issue. How throwaway is it? Jeff and I find more to talk about in alternative careers for the Mad Thinker than we do with what’s actually in the issue. There is a random King Kong reference to lighten the readers’ load, however, and Jeff reveals who Reed Richards’ true love is.

1:49:10-1:55:47: “We’re speeding through these, because I swear to God, they’re not worth paying attention to,” I say, as we spin into Fantastic Four #70. I’m not joking, apparently, because I really do speed through the plot of this issue, at least until we hit the point of true Kirby logic: no matter how much thinking you can do, a good punch is always better. Meanwhile, Jeff ponders the way in which the series starts to fulfill Stan Lee’s ideal (which is to say, Reed Richards Spotlight Monthly.) and the surprising lack of design when it comes to the Mad Thinker’s androids. There’s also this memorable-for-all-the-wrong-reasons Kirby splash page (We can all agree he’s checked out at this point, right?): 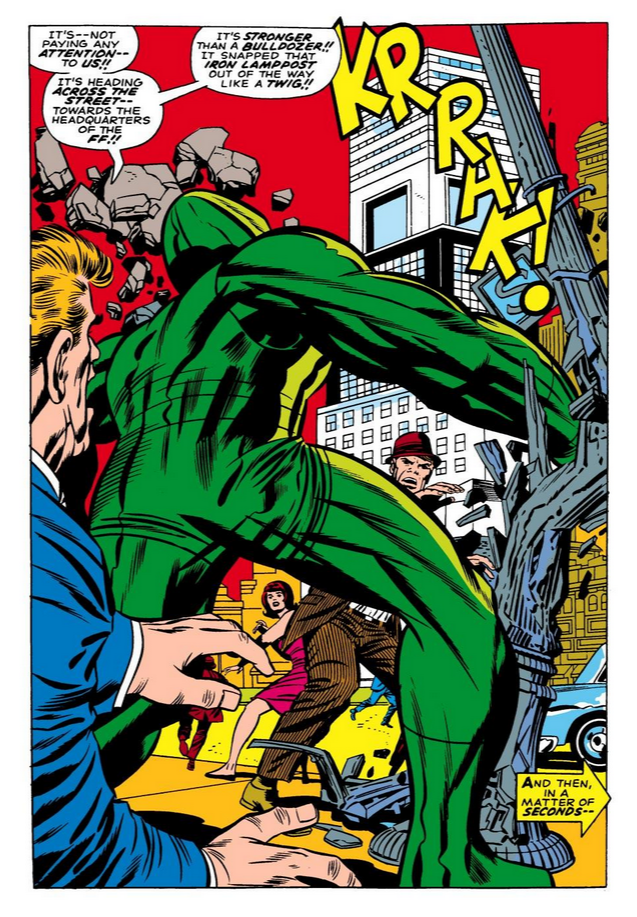 We also talk about the other sign that Kirby isn’t paying as much attention: The lack of subplots in these issues.
1:55:48-2:01:11: Fantastic Four #71 brings a slightly revived Kirby (art wise, at least) and a Lee that’s perfectly prepared to sell Sue down the river if it makes Reed look good. It also brings the first appearance of a future FF trope, which is bad news for the Negative Zone, but that’s really about all you can say about it.

2:01:12-2:10:13: Even though I finally ‘fess up and say that I don’t like the Silver Surfer (Sorry, everyone), there are things I find fascinating about #72 — not least of which is the fact that the Silver Surfer is very explicitly depowered, which will never be mentioned again. Oh, and the Watcher reveals that he’s all about Jesus:

Meanwhile, Jeff blows my mind with a theory that Superman and Silver Surfer are pretty much the same character with just one important difference (I’m unconvinced, but it’s something that never would have occurred to me). Also, is this the era where Stan Lee goes from wanting his characters to evolve to wanting it just to look like things are evolving? Jeff has another theory that suggests that’s just where we are. And if you’ve never considered the possibility of the Watcher as a boy scout, prepare your mind. 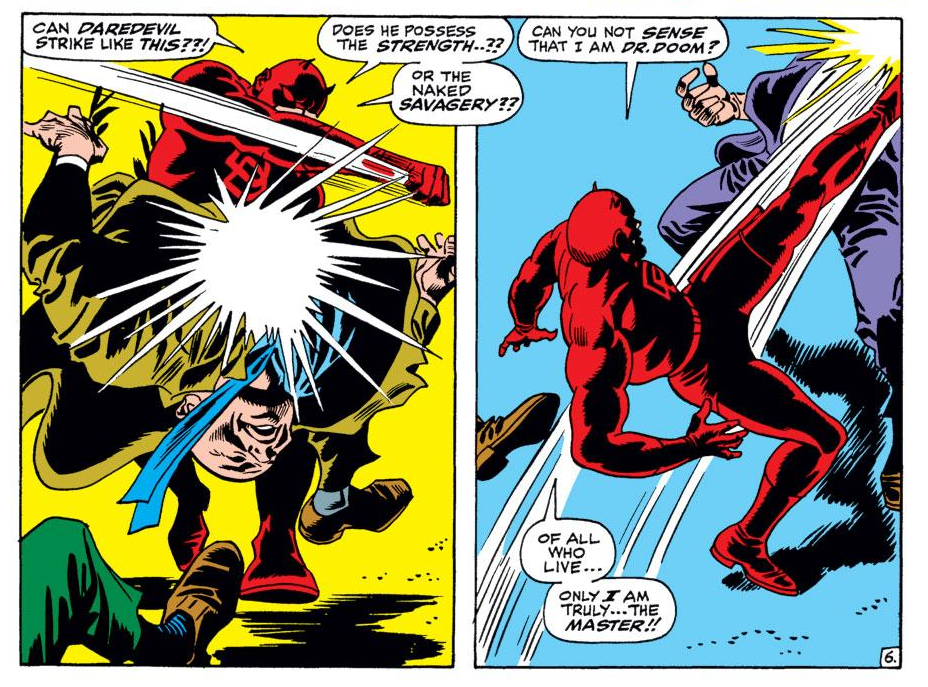 2:10:14-2:19:27: Oddly enough, Fantastic Four #73 is the third part of a storyline that began in Daredevil #37, and so I fill Jeff in on what he missed — I highly recommend everyone who has Marvel Unlimited checks it out, because it’s wonderfully fun, if utterly ridiculous (The panels above come from Daredevil #38, AKA “Superior Spider-Man, but 50 years earlier”) — before we tackle the fall-out, in which Stan doesn’t really realize whether or not the FF think the Spider-Man and Thor they’re fighting are the real thing or not. I’m not a fan of this issue, which feels like filler for me, but trust Jeff to find a subtext that makes it more interesting, speaking to Kirby’s dissatisfaction with his place at Marvel at the time. There’s a textual reason to enjoy it, too: more proof that Sue is by far the most important member of the team when it comes to ensuring that they don’t do something dumb to destroy themselves. Where would the team be without Sue? We’ll find that out next episode. 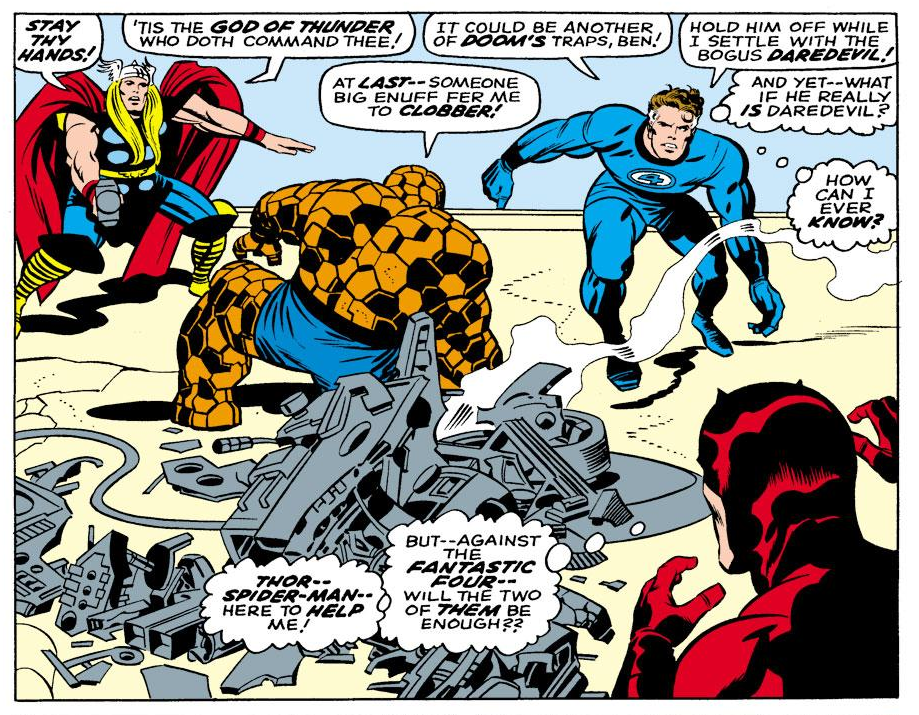 2:19:28-end: In which we look back on the issues we… enjoyed? Kind of? and look forward to what’s to come in the next episode — #74-81 — promising that, honestly, it’ll be a better batch of things than what we had this time. Really. As ever, you can find us on Tumblr, Twitter and Patreon, as well as on this very site, where we’ll have no less than three written posts this week before returning next week for a regular Wait, What?. Better than a poke in the eye with a sharp stick — or, for that matter, having to sit through that Fantastic Four movie again. Thanks for listening (and reading these notes), as always.