Previously on Baxter Building: Having survived Galactus, a fake Ben Grimm, the return of the Inhumans and Doctor Doom stealing the Power Cosmic so that he could catch a wave made out of air — really, will surfing Doctor Doom never stop being funny? — the Fantastic Four are ready to kick back and relax for awhile, as (I’m sure) are Stan Lee and Jack Kirby. Spoilers: That doesn’t happen.

0:00:00-0:05:46: We open the episode with a quick discussion about the final trailer for Josh Trank’s Fantastic Four movie, which Jeff likes a lot more than I do. (This comes as the tail end of a conversation about my Comic-Con experience, which really might’ve been something we should’ve held back for the next regular Wait, What? episode, but there you go.) If you haven’t seen the latest trailer, here it is:

0:05:47-0:13:35: I really don’t know why, but I get the words “issue,” “episode” and “page” mixed up a lot this episode, as you’ll quickly learn as I introduce this episode, but things very quickly derailed when I ask if Donald Trump is the real life Victor Von Doom. The answer to that question — spoilers — might rely on how seriously you take Doctor Doom. (It’s not really like anyone takes Donald Trump seriously, right? Apologies if you’re a massive Trump believer, but… Well, maybe not.) Really, though, we’re talking about Fantastic Four #61-67 this time around, and to prep, we quickly discuss whether or not Stan Lee’s verbosity is redeemed in these issues, while Jeff gives a special warning about the amount of “backseat driving-slash-kibbitzing” he’s planning for this episode. 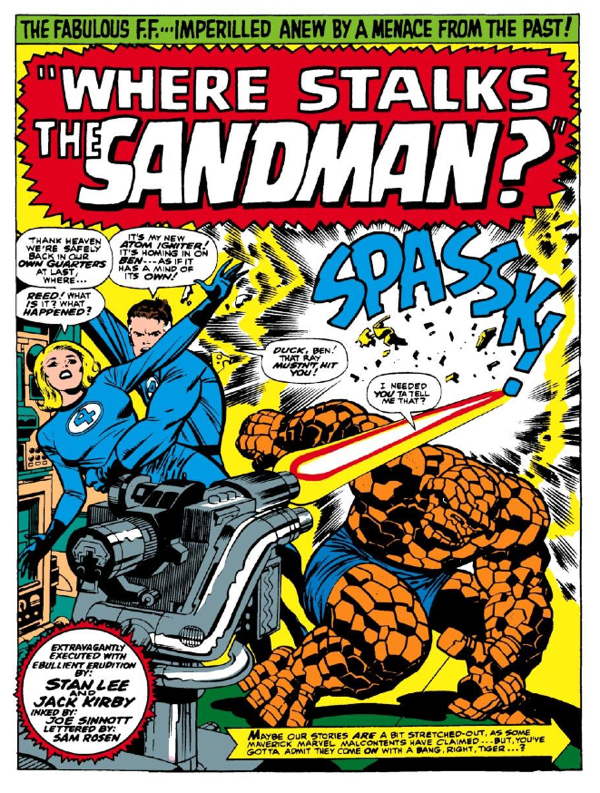 0:13:36-0:23:21: The most immediate thing about Fantastic Four #61, for both Jeff and I, is the artwork and especially Joe Sinnott’s inks. Is Sinnott the very best inker when it comes to the Thing? (Yes.) Also under discussion is the issue of Lee trying to introduce the stakes into each scene, and whether or not there’s any real way to do that after the characters have survived — and defeated — Galactus. 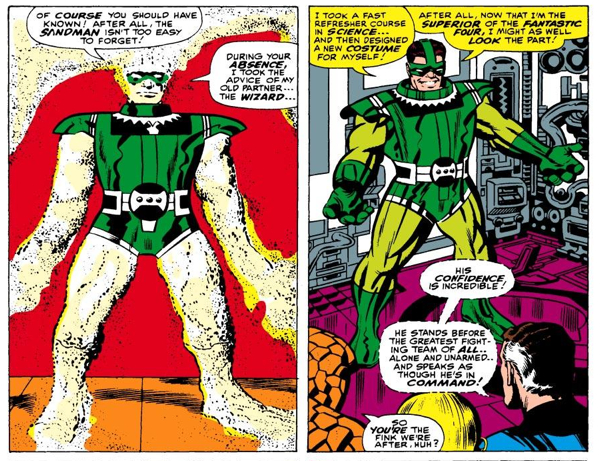 0:23:22-0:27:50: We continue the discussion of the question of stakes, but get distracted by the new-look Sandman, and the fact that the new Sandman is kind of a misstep in the overall history of the character, but such a welcome one. That’s just a mere bump in the conversational road before we hit on the formula of the FF in this era, which might be best described as “Wait for it…! Wait for iiittt…!.”
0:27:51-0:41:18: Where, exactly, did the Sandman come from this time around? Jeff suggests that he’s a one-man Fantastic Four, but the bigger question might be, who thought that the Sandman could be a Big Boss for awhile? Nevertheless, he comes in to defeat the team — no really — and serve as a Macguffin to introduce another cosmic threat. Is the book out of kilter post-Galactus, with Lee and Kirby constantly trying to top themselves with each successive arc? Put forward for a second is the theory that this is the period that lays the template of the series for the next decade or so of the series, which means that you’d all better enjoy what’s going on here. But while this issue doesn’t necessarily make the most amount of sense, it has a spectacularly bleak climax.
0:41:19-1:05:56: Jeff has problems with the title of Fantastic Four #42 — “And One Shall Save Him” — for spoilery purposes (Really, did anyone think that Reed wouldn’t be saved, though?), but there’s a lot to love here, including Triton of the Inhumans showing just how great an air gun could be, the staggeringly great art of Kirby and Sinnott, and Blastaar going from a genuinely outstanding introduction to turning into a fairly disappointing villain with explosive fart fingers. That said, Jeff manages to come up with an alternate version of this story featuring the Sub-Mariner that might be more rewarding for longterm readers than what we actually get, as well as the concept for an entirely different series that I would read the shit out of. He’s on a roll this time around.
Meanwhile, for artlovers, here’s the original printing of the double-page spread we talk about (Apologies for the watermarks): 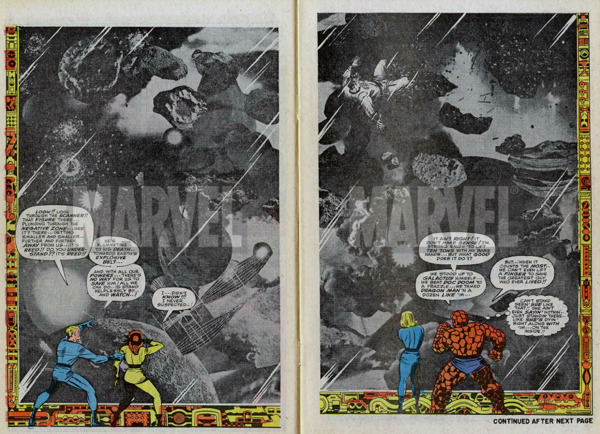 And here’s the Marvel Unlimited version, which really is disappointing in comparison: 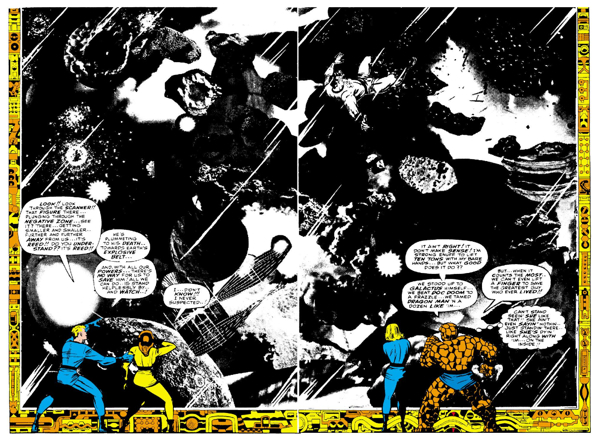 Oh, and here’s the page of Jungian imagery that Jeff and I went gaga for: 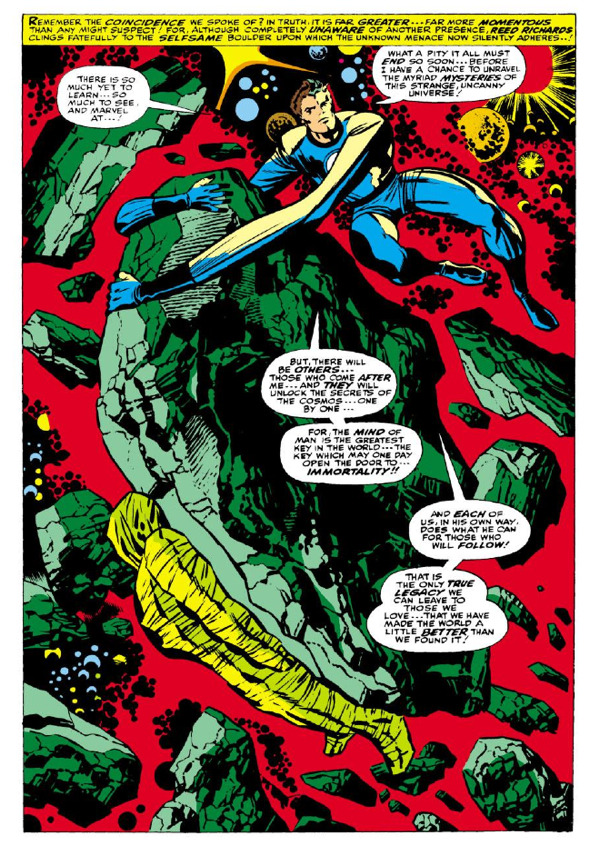 I mean, really. How great is that?
1:05:57-1:16:42: “He’s got fart fingers! He’s never going to punch someone! Fart fingers! Come on!” is Jeff’s take on Blastaar, while I point out that he comes up with the Masters of the Universe aesthetic 15 years early (He’d be called Phartorr, right?). He’s a great, nonsensical villain for Fantastic Four #63, an issue that looks great, but is utterly nonsensical, with an especially last-minute, rushed conclusion. (But that’s nothing, just wait for the next issue.) We speed through it, because it’s another finale of a trilogy that’s nowhere near as interesting as what’s come before. Sorry! 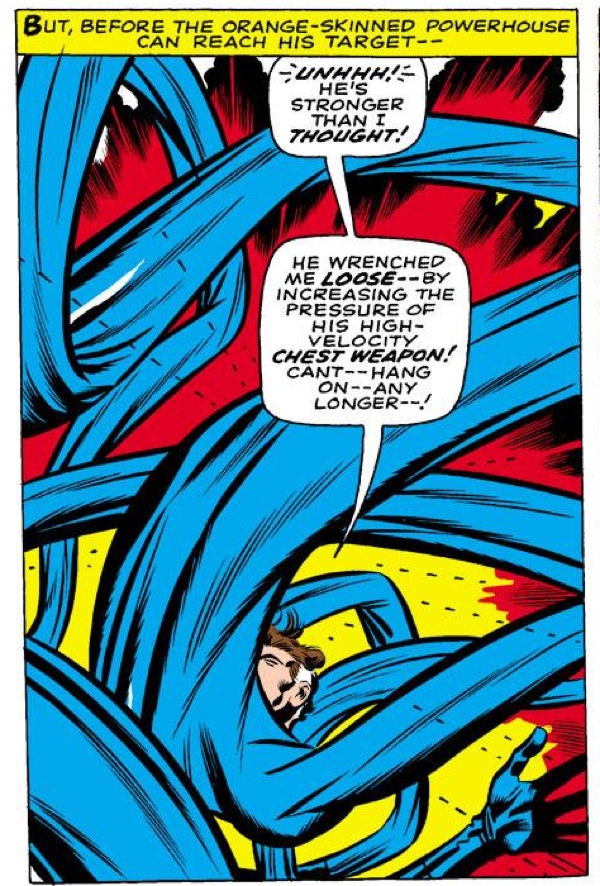 1:16:43-1:29:34: Massive coincidence aside, it’s worth pointing out that FF #64 is a surprisingly light issue that really relies on Stan Lee to hold it together narratively, so of course we use it as an opportunity to take a detour into talking about Kate Willaert’s great Kirby Without Words Tumblr, because we’re contrary. Jeff, however, finds nuance in a story that I wasn’t really feeling, and instead uses it as an example of Kirby’s obsession with colonialism. It’s really far, far more than the issue deserves, even though it sets up what’s following. And talking about what follows…

1:29:35-1:34:22: For an issue that’s so dramatic — and features the first appearance of future movie star Ronan the Accuser — Fantastic Four #65 has a lot of downtime for the team, which might be the highlight of the issue for Jeff and myself: Ben and Johnny’s early morning routine! Reed and Sue on a date! The “mystery of the Alicia!” Okay, maybe that last one isn’t so great, but it’s better than Jeff’s point about Ronan’s space hammer — although, for faithful listeners, here’s the panel he’s talking about: 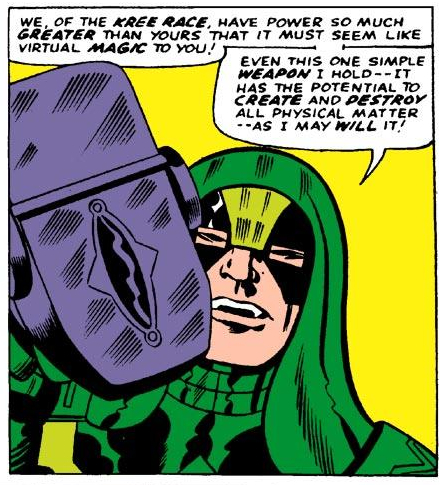 1:34:23-1:45:16: What happens when Stan and Jack decide to build on what they’ve done thematically with the earlier cosmic issues? You get the oddity that is Fantastic Four #66, which has some strange stuff early on — the Thing really acts out of character for some inexplicable reason, which we talk about a little — but quickly unfolds into what Jeff calls “the Moby Dick issues of the Fantastic Four,” with allusions to Cocteau, the Bible and 2001: A Space Odyssey. There’s so much packed into this issue, and all of it comes as prelude for the next issue. I’ve said it before, but this really is the Good Stuff (and maybe the last genuine highpoint of the Lee/Kirby run). 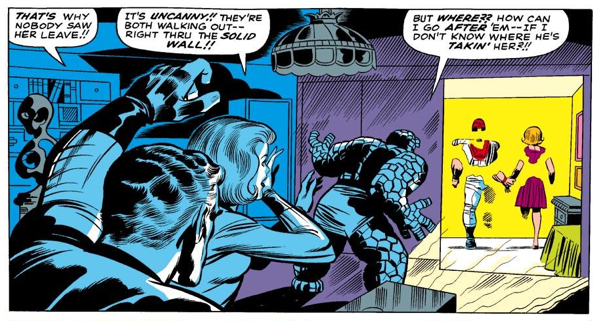 1:45:17-1:59:34: As everything goes to hell in FF #67, we talk about the way in which this issue teases Kirby’s future work from OMAC and Jimmy Olsen to 2001 while also showing a very unusual-for-him distrust of science, even as it shows the most Kirby-esque Space Jesus we’ve probably ever seen, highlighting the way in which Kirby — and, potentially, Lee? — has evolved as a creator from his monster comics of a decade earlier. The heroes are almost absent from the comic, because this is a marvelously dreamlike fairy tale that’s just pretending to be a Fantastic Four comic. Or, if you’re Jeff, it’s “some trippy-ass shit,” which also gets the point across pretty well, when it comes down to it. Really, it’s probably all downhill from here on (albeit, an enjoyable trip downhill).
1:59:35-end: And we’re done, teasing what to expect next time — #68-73, and Annual #5 — and reminding all of you that we can be found on Twitter, Tumblr and Patreon. Next week, we’re back with a regular Wait, What?, and Baxter Building will be back in a month, when everyone will be sick of the Fantastic Four because of that damn movie. Thanks, as ever, for listening and reading. Bless all your cotton or unstable molecule socks, whatnots.

12 comments on “Baxter Building Ep. 7: “Wadda You Know About Nightmares?””