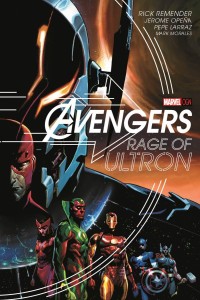 If you haven’t already checked out the latest episode of the show, you want to scroll right past this here entry and down one post. Trust me, it’ll be worth it.

When announced, Avengers: Rage of Ultron seemed like a casually cynical, unnecessary tie-in to the Avengers: Age of Ultron movie; even the title felt a little desperate in its attempt to echo the movie’s title given that “Age of Ultron” was already in use by another comic altogether. The finished product, it turns out, only adds to the feeling that it’s a comic that no-one really wanted to happen outside of the marketing division.

Part of that apathetic feel comes from the story, which feels rushed and inorganic in a way that stands out even in contemporary Marvel. (A quick aside, but a question for those who keep up with Marvel in regular releases and not Marvel Unlimited six-months-later format: Did the “Time Runs Out” Avengers storyline actually ever synch up with the rest of the line? Like, did Captain Marvel show her costume change, did Superior Iron Man end with Tony being imprisoned, did the bland dystopia of Hickman’s eight-months-later with SHIELD armies and the like ever actually get reflected in any other book?) Motivations and relationships feel manufactured and unconvincing, leading to a climax that was clearly intended to be one of those nothing will ever be the same again moments, but instead just feels ridiculous and primed to be undone at the earliest possible opportunity.

For those who don’t know what that climax is, avoid the next two paragraphs for spoiler-y reasons: the book posits that Ultron isn’t just a psychopathic robot, but is in fact the robotic personification of Hank Pym’s own psychopathic tendencies, and upon Ultron convincing Hank of this theory, Ultron forced himself on Hank so that the two join to become a hybrid Ultron who… suddenly end up flying off into space because they’re so horrified about what they’ve become, and fold up into the fetal position for no immediately apparent reason…? (NewUltron says very emo things like “I was built hollow in a world I didn’t belong to,” you’ll be happy to know.)

It’s a moment that doesn’t ring true at all, because even if you did buy the idea that Hank was always this nihilistic rage machine — I don’t, personally — the idea that Ultron wants to suddenly merge with his father for reasons never explained feels both out of nowhere and too on-the-nose in regards to his Daddy complex. For the resultant hybrid to not actually do anything afterwards except run away, it feels like a waste of two worthwhile characters.

That’s not to say that either one was written in character, of course. (I’m done with spoilers now, welcome back) Every character in the book with the arguable exception of Spider-Man feels off to some degree, whether it’s the somewhat broader versions of the Wasp and Starfox (included, it should be said, for no immediately discernible reason whatsoever; he literally serves no purpose to the plot) or the comedically out of synch Vision or Hank Pym. Everyone acts in service of the plot, which itself makes little service beyond the big climactic moment, which itself ends up being a damp squib that holds no weight. In other words, the entire story feels like an exercise in hitting sales figures more than anything else.

But at least it has Jerome Opeña art — kind of. In another moment of wait, why is this actually the case?, Opeña doesn’t actually draw the entire book; random pages are by Pepe Larraz, who does enough of a serviceable impression of Opeña — in large part, I suspect, down to “additional inker” Mark Morales who’s working with both pencilers on some pages — that it’s not a massively jarring change, but it is certainly noticeable. Why the additional artists? Deadlines, I presume (It’s certainly not for any story reasons; Larraz literally draws pages inside scenes otherwise drawn by Opeña), which feels particularly odd for a standalone graphic novel that doesn’t connect up with current continuity, until you remember that there was undoubtedly a drop-dead endpoint to get finished by, in order to get the book published by movie release. (Compare and contrast this with Secret Wars, which is currently scheduled to end two months and one issue later than originally intended, so as to keep the creative team consistent.)

The book, as a whole, feels like a rushed last minute attempt to blow a half-sketched idea for an annual somewhere down the line into a prestige graphic novel, but it’s a failure in all the ways it should be working: as a standalone story that has value in and of itself, as a showcase for each creator’s talents, and as a gateway for those who’d enjoyed the movie to find out what happened next (Concentrating on a familial relationship between Ultron and a character who isn’t even in the movie should’ve been a warning sign at an early stage, I feel).

I felt pretty low on the prospects of the book before I started; I didn’t expect to feel even worse about it when I was done, so at least one thing came as a surprise about the whole endeavor.

3 comments on “Because Unnecessary Tie-In of Ultron Was Maybe A Little Obvious: Graeme Reads Avengers: Rage of Ultron”