If you haven’t already checked out the new episode of the podcast, scroll down to the next post, for it is there and it is good. Or, you know, at least okay. For everyone else, click through for some random thoughts I had while re-reading John Byrne’s West Coast Avengers/Avengers West Coast run this weekend.

1. There’s a particular school of writing that Byrne belongs to — especially Byrne of this era, the mid ‘80s through early ‘90s — that I always ascribe to Chris Claremont, somewhat unfairly; I’m sure someone else was overloading their pages with prose so simultaneously purple and utilitarian before Claremont, after all, and his captions had more of a sense of fun than Byrne manages. Reading Byrne’s captions — and his plots, at many points in this run, too — I’m reminded of Stephen King and the horror novels I occasionally read at the time this was coming out. Again, as with Claremont, the comparison to King isn’t right; King, again, has more humor and style than Byrne. Perhaps I’m thinking of someone like James Herbert or the like. Nonetheless: Man, Byrne likes writing long.

2. This run — which starts with #42 and runs through #57, with Byrne quitting mid-arc — is filled with what feels like score-settling and fannish retcons. It’s impressively arrogant, with characters acting out of character (especially Hawkeye and Mockingbird, but Byrne essentially reboots Tigra, the Scarlet Witch and the Vision with his very first issue) and past stories either retread — Tigra’s becoming a cat! Just like she did in the first couple of years of this very series! — or re-written (The Vision was never really the original Human Torch because… well, just because, okay?!?) for seemingly little reason. Even the stories that aren’t explicitly revisits to past Avengers continuity are lifted from elsewhere… including Byrne’s own X-Men run, with the Dark Phoenix story ripped off for the Dark Wanda storyline. The whole thing has the feel of satisfying a weird agenda of Byrne getting the chance to “do it right,” whatever “it” ends up being, and instead proves that the man really needed a strong editor. 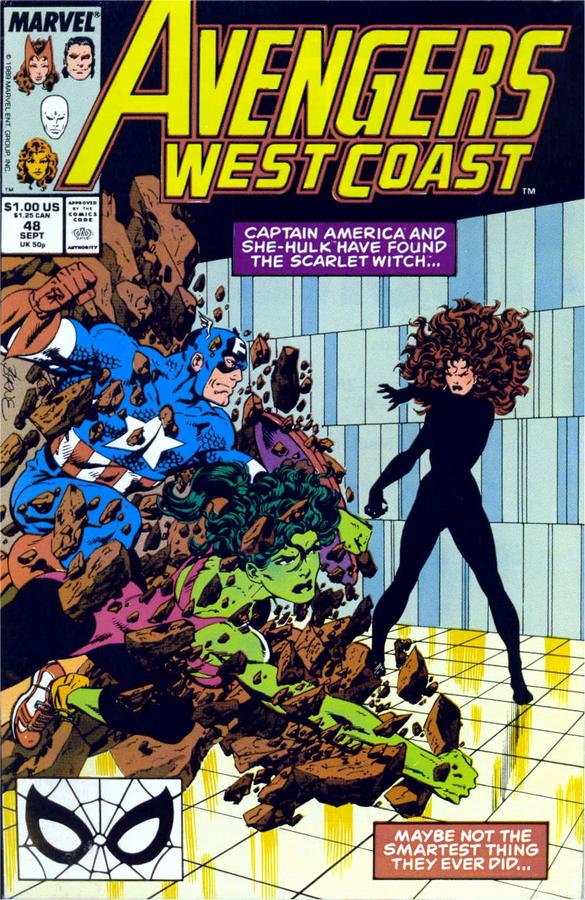 3. The speed at which Byrne dissembles the team is nonetheless impressive; by the fourth issue, the team’s membership is essentially halved, and the leads of the first couple of Avengers West Coast issues are Captain America and She-Hulk, neither of whom actually belonged to the team. The team as Byrne rebuilds it is weirdly fascinating, too: Hank Pym, the Wasp, Wonder Man, U.S. Agent, the original Human Torch, Scarlet Witch and the Vision. There’s some potential there — just having the two robots on the team is interesting enough! — but the characters barely get to spend any time together because of the plot mechanics Byrne puts them through.

4. Magneto is unambiguously a bad guy here — and Quicksilver somewhat more of a good guy — which feels very much at odds with what was going on in other books at the time. More examples of Byrne’s “I’m doing it my way” approach, perhaps?

5. The art, too, is very… odd. Part of that is the inking, which veers between embracing solid blacks and then going for a lightly-feathered look depending on what issue you’re reading at the time — despite Mike Machlan being the inker for the majority of the run (Byrne himself inks an issue or two). Byrne’s pencils have lost the Kirby-influenced dynamism of his earlier work, but there’s some nice play going on; each issue starting with a character staring at the reader for a long time is a trend that isn’t immediately apparent, but is fun when you notice. But this isn’t just far from Byrne’s best efforts; it’s very, very uneven in a way that Byrne normally isn’t. Love or hate his work, he’s normally more dependable than he is here.

6. The one thing that Byrne did unambiguously right during these issues? Get rid of Wonder Man’s mullet. Good job, John Byrne.

7. Despite all of the ingredients — the characters, the retreads of Avengers history and Byrne himself, who drew a chunk of issues during the early ‘80s and stayed in touch with the book through Stern’s run as writer — this never quite feels like an Avengers title, for some reason. I can’t work out why that is; it feels too inconsequential, too small, despite Byrne literally having a villain who’s been around since the dinosaurs at one point.

8. More than anything else I’ve revisited in recent years, re-reading these comics made me mad at my teenage self. I really liked these issues when they first came out. I can remember how excited I was for Byrne’s run to begin, because I loved his art so much and had convinced myself that his Action Comics and Superman work were some of the best Superman stories ever (I was 14 at the time, please forgive me). Even more than Secret Wars, though, these issues let me down when revisiting them as an adult; I was, in some sense, prepared for how bad Secret Wars was going to be, but I genuinely thought there was some spark of inspiration to Byrne’s WCA that… just doesn’t even vaguely exist. It’s more than a year of missing the mark and a lack of ambition, executed in such a way that you can just tell that Byrne believed that he was killing it month in and month out. This was the guy I was supporting back then! Clearly, I was wasting my money.

4 comments on “Maybe Not The Best Coast Avengers: Graeme vs. The Short John Byrne WCA”