First off, there’s the first episode of Baxter Building, our long-awaited Fantastic Four readthrough, right below this post. I’ll cut the main part of this off under the jump and let you scroll down and enjoy it. Secondly, look at me — my fear about having to delay this until Wednesday this week turned out not to be the case!

As a testament to how on top of things I am, I have to confess that, while I’ve still not managed to get myself a copy of Marvel’s Star Wars #1, I did spend this weekend reading the collected versions of both Star Wars: Dark Empire — including both Dark Empire II and Empire’s End — and Star Wars: The Crimson Empire Saga. Look at me: I’ve got my finger on the pulse of comics that came out two decades ago and are pretty much swept under the carpet by all and sundry these days!

Of the two, Dark Empire was by far my favorite, because it managed to feel very faithful to the movies — Tom Veitch writes great George Lucas, surprisingly; I think it’s the latent hippie in both finding common purpose in the Force — without really delving too deeply into the larger mythology of the franchise. That’s definitely where the three Crimson Empire series fell down for me; as much as I’m a fan of the movie, I don’t really have the depth of passion for the larger Star Wars world that’s required to care about the honor system that motivated the Emperor’s bodyguards, nor do I inherently find the idea of “double-crossing inside the remains of the Empire” fascinating when it doesn’t have any true characterization to fill it out.

(Crimson Empire also features more original characters, which is always a problem for me when it comes to Star Wars; I was exposed to the original movies at a young enough age that, even now, “Luke Skywalker” and “Han Solo” — even “Chewbacca” and “Greedo” — just sound right in a way that almost every single Star Wars expanded universe character’s name doesn’t. I can appreciate that things like “Kir Kanos” or “Mirith Sinn” might follow in the footsteps of those earlier names, but part of me instinctively recoils upon reading them, thinking that they’re ridiculous and silly. It’s an entirely arbitrary complaint, I know, but it’s there nonetheless.) 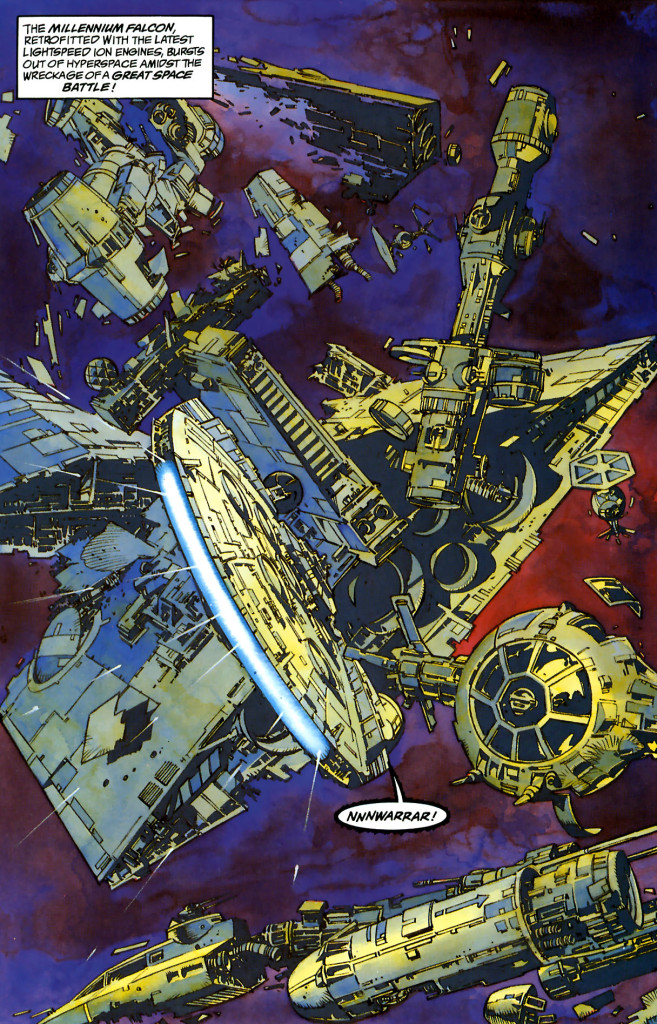 Dark Empire is also the book that manages to suggest the scope of the movies, which feels particularly essential to anything called Star Wars, to me — each of the movies lives up to the “space opera” tag with overblown stories in which the fate of the galaxy is constantly in the balance (That’s arguably untrue about Empire Strikes Back, come to think about it; hmm), and so it’s perhaps unsurprising that the “one man out for revenge against folk who did his sense of honor wrong” plot of the Crimson Empire books feels too small and inessential by comparison, despite the fate of the Empire ostensibly being at stake. (Crimson Empire also lacks a sense of humor that I similarly find oddly essential to Star Wars, even though I wouldn’t necessarily call them particularly funny movies.)

Despite this, both collections felt over-extended and increasingly inconsequential. The drop in quality between Dark Empire and its sequel is noticeable, and Empire’s End, in theory the third part of the trilogy, feels more like a contractual obligation on behalf of Veitch, with Cam Kennedy — whose art for Dark Empire and Dark Empire II is just staggeringly good, and something that makes you wonder why he never broke through in the States properly — entirely absent. The gap between the three Crimson Empires is less pronounced, but each installment nevertheless feels weaker and less interesting, as if the original passion is being replaced by professionalism and cynicism. Insert your own isn’t that what happened to the movies as well joke here, I know. 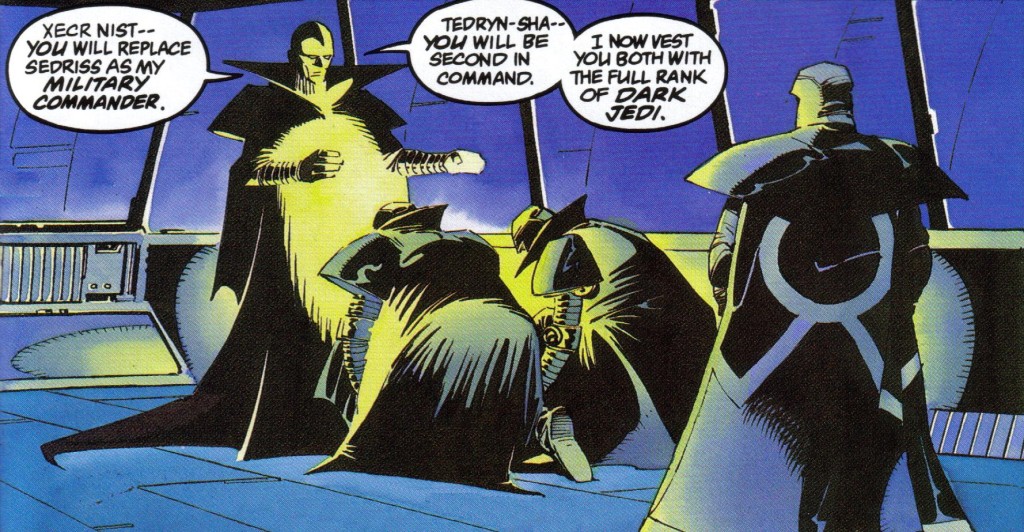 Of the six series, only the first Dark Empire is something that I’d easily recommend to anyone other than a hardcore fan of Star Wars, which both makes me wonder about the nature of the extended Star Wars franchise/universe as a whole, and the Jason Aaron/John Cassaday Star Wars title in particular. The thing about Star Wars, more than almost any other massive franchise to me, is that it’s defined by a very small amount of “core” material, leaving almost impossibly high standards for any ancillary material to reach in order to work. I don’t know if that’s something that’s particular to me, or more generally the case — and if it’s the latter, what that says about the strength of Star Wars as an ongoing franchise, and the potential of all the various Marvel series that we’re going to see over the next few months.