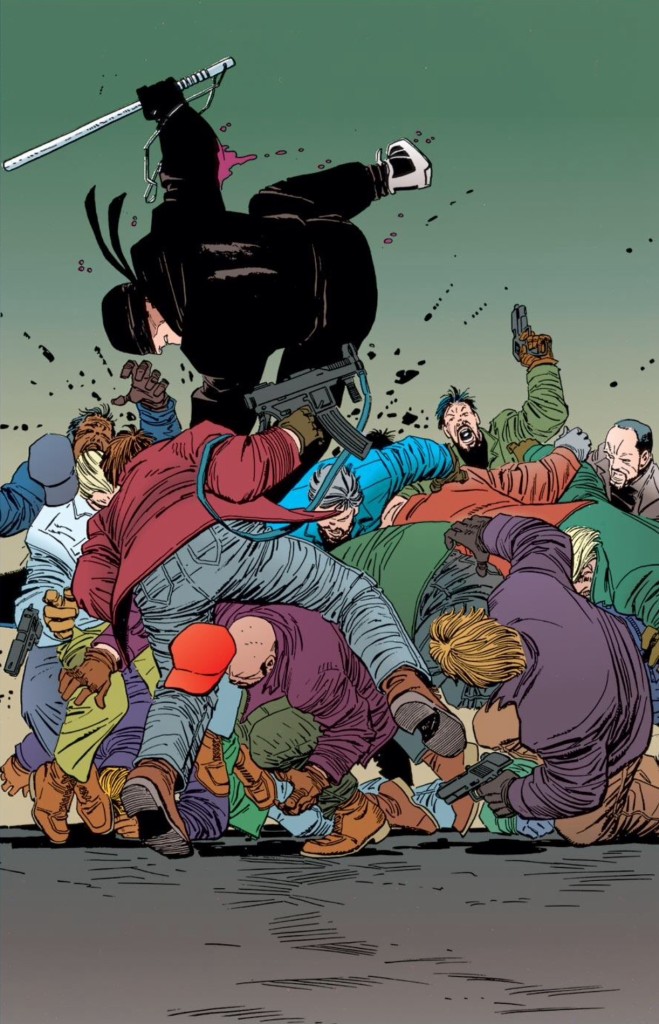 DAREDEVIL: THE MAN WITHOUT FEAR #1-5: We’re on the penultimate episode of the Netflix show and there were all these things that kept making me think of this miniseries, written by Frank Miller and drawn by John Romita, Jr., so (cue the Marvel Unlimited theme music) I decided to re-read and see how much the show’s staff ganked from it.

Surprisingly, it wasn’t nearly as much as I thought. I may have been thrown off by the show’s costume which is super-indebted to the one here (and which I love on the show; I think I’m really going to be bummed when they “upgrade” his outfit) but, apart from a few bits and pieces—like a conversation between Stick and Stone, or an emphasis on child abduction—the show very smartly goes about setting up its “Daredevil: Year One” as a going-forward enterprise.

By contrast, Miller & Romita’s “Daredevil: Year One,” is more of a backward alignment thing, despite Miller’s story having originally been a movie script, a chance for Miller to show us the roller coaster college romance between Matt Murdock and Elektra and retcon Daredevil’s origin in a way that suits his conception of the character.  For instance, It’s interesting to me how keyed in the show’s creators are to Miller’s conception of Matt as inherently violent and angry while ignoring the two keys Miller provides to that anger Miller—Matt being taunted with the name “Daredevil” by bullies, and his father being both semi-abusive and a semi-criminal himself.  One of the few bummers about the Marvel Universe issues is the lack of the (foreword?/afterword?) Miller contributed where he talks about how Daredevil should’ve become a villain but didn’t:  that’s the bit the showrunners have so far used to best effect. 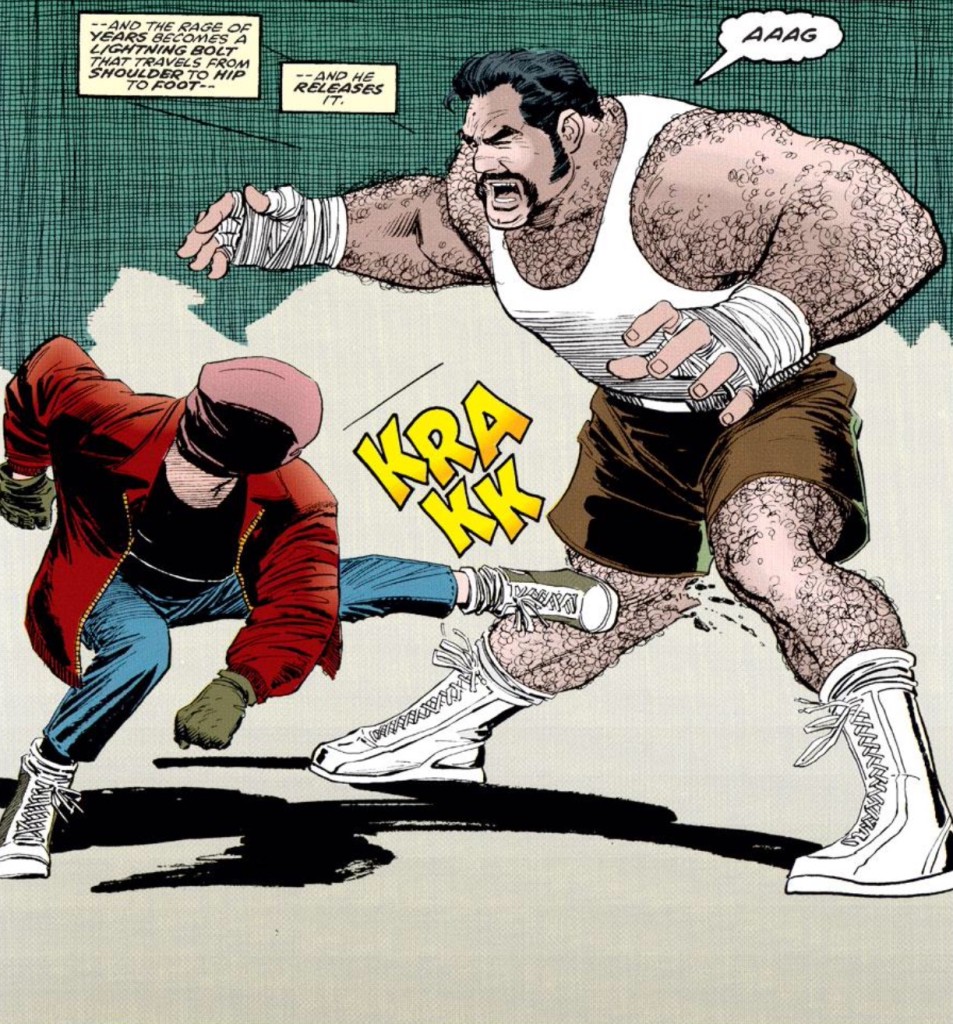 But also surprising about the miniseries isn’t what Miller wrote, but how he wrote it.  Having re-read four of the twenty issues of the Nocenti/JR JR run currently available on Marvel Unlimited, I was struck by how Miller’s tone here is closer to Nocenti’s writing than, say, Batman: Year One. It’s clear that Miller was a fan of Romita, Jr.’s work before they worked together, but I’d never contemplated Miller reading the Nocenti/Romita Jr. run and also being drawn to Nocenti’s camp (but not campy) approach.

That’s a new idea for me, and like a lot of new ideas, it has a lot of allure while quite possibly being completely wrong:  after all, by the time Miller came back to Marvel to do Man Without Fear, he’d already done Hard Boiled, Give Me Liberty, and his first Sin City story, none of which are known for, uh, writerly ambiguity?

It’s the sort of thing I should probably research and confirm, but I always assumed Miller’s collaboration with Bill Sienkiewicz on Elektra: Assassin had been the game-changer, since the beginning of that mini reads like Miller telling Elektra’s origin like the start of Joyce’s Portrait of the Artist As A Young Man, and the end is like watching Ralph Steadman adapt The Terminator, something gloriously brash and irreverent. (For a while now, I’ve toyed with the idea that Sienkiewicz bailed on Big Numbers once he realized he couldn’t perform a similar seduction on Moore: the thought of such a steadfastly prim creative marriage was more than the decadent Mr. Sink could bear.)

Between that and his disastrous time in Hollywood, there would be no going back for Miller: not only was the idea of comic books being high art now of no interest to him, it was the low art element of comics most worth celebrating. And so it’s more than entirely reasonable he needed no inspiration to strike the tone of the Daredevil: Man Without Fear miniseries:  he’s going to have Matt’s father turned into a mob fixer before the boy’s eyes, and he’s going to have  a fat cop say “why can’t you all learn to behave like the Murdock boy? He’s never in trouble, is he?” exactly one panel before a young Matt Murdock, face obscured, steals the cop’s billy club and rides off on a skateboard, in an era where Bart Simpson hopping about Springfield on his board is still a new and pertinent image.

And yet that scene isn’t far away at all from the tone of the Nocenti/JR Jr Christmas issue of Daredevil, where a kid named Eightball rolls about on his skateboard, unsure if he wants to be like Daredevil or DD’s foes of the issue, the Wildboys. Similarly, Miller had revisited Elektra, his creation, several times and each time he moved her sexuality a bit more into the foreground. But isn’t the scene where Miller has Elektra achieve sexual climax… 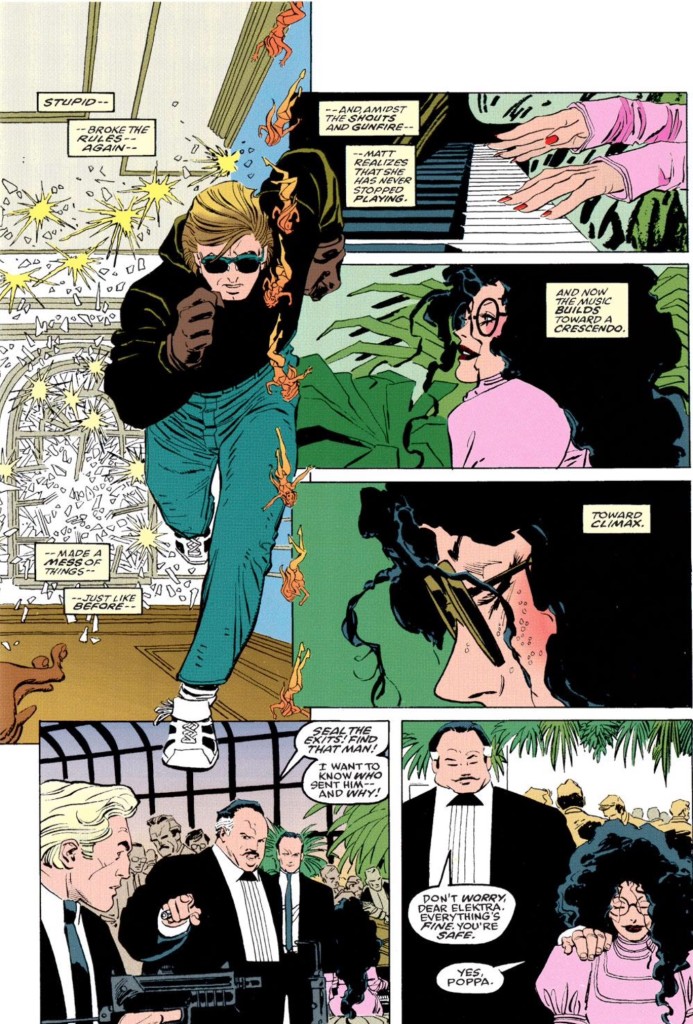 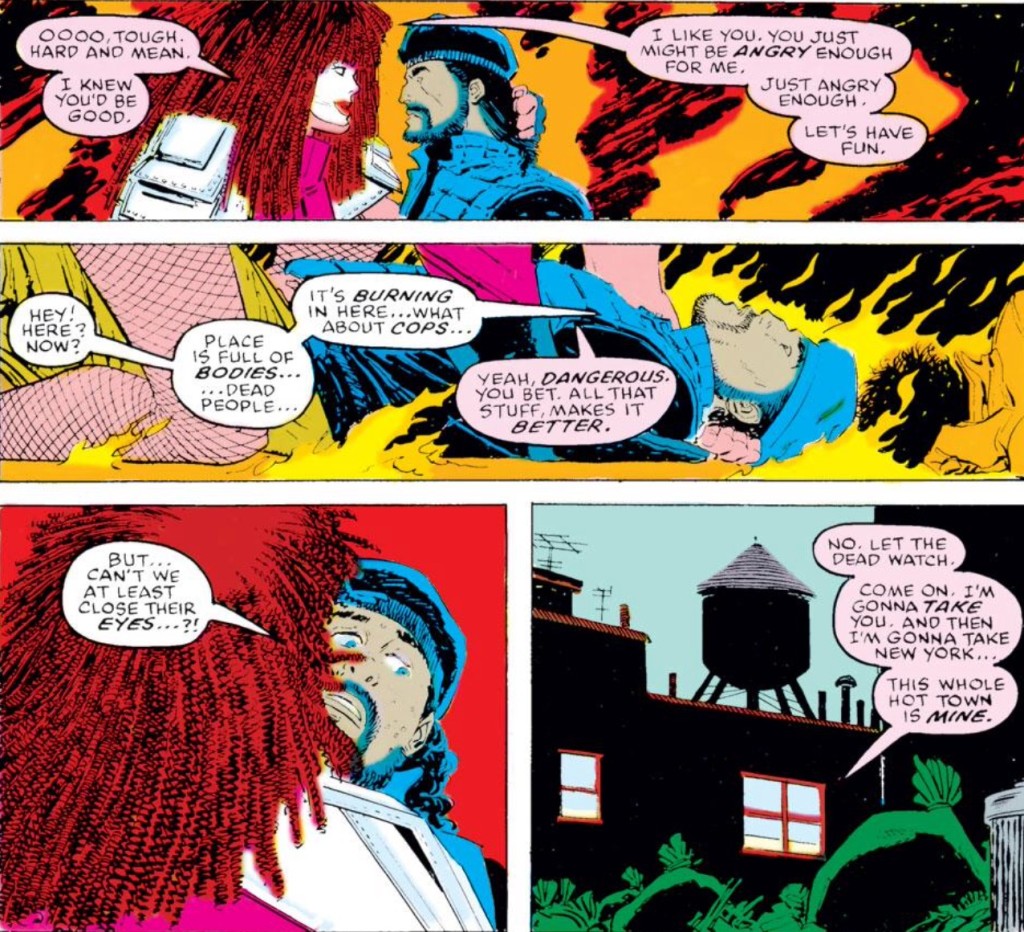 …than any of Miller’s previous takes on the character?

This is the problem with a lack of nuance: it makes it harder for amateur critics to draw distinctions. I can’t really say if Nocenti is an influence or not.  What is incontrovertible is that John Romita, Jr. drawing and designing pages like of a sonuvabitch. 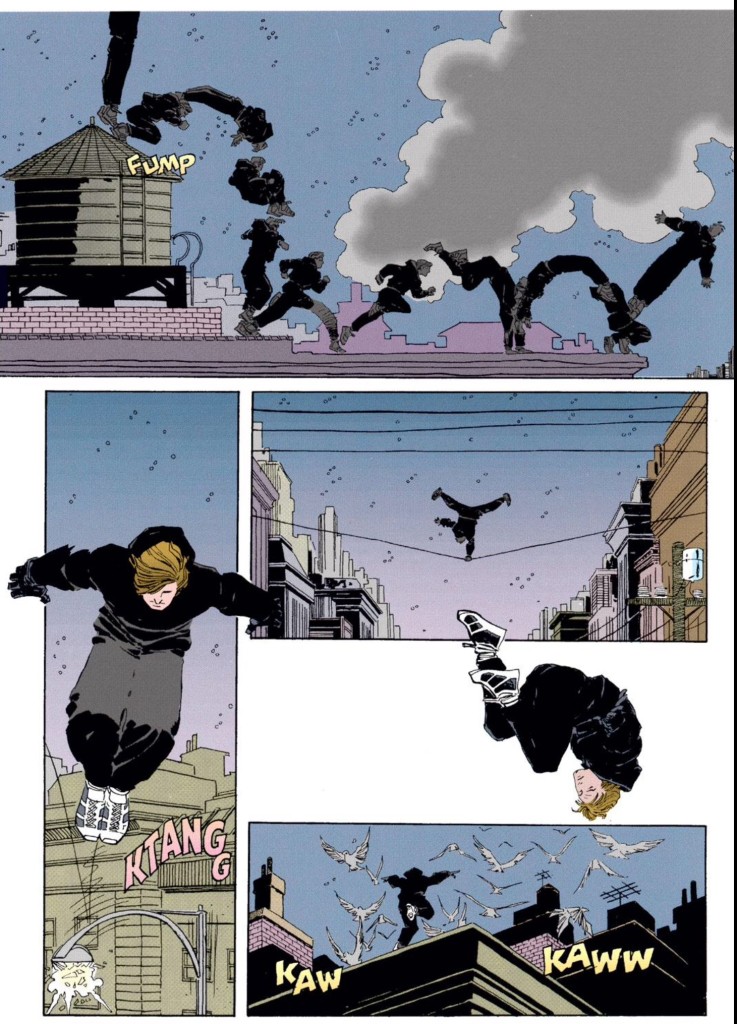 (Rereading this and those few Nocenti issues really drove home to me how sophisticated the guy was in using white on the page).  Although it was tough to pick a favorite full-page splash out of all the amazing splashes (It’s almost impossible not to pick the one  that starts off this post), my favorite is where helpless teen Mickey hollers for Matt while being whisked away by a thug.   Simultaneously a moment of high melodrama and a cleverly self-Lichtensteinian refutation of Licthenstein, it’s more than absurdly large.  It’s comics. 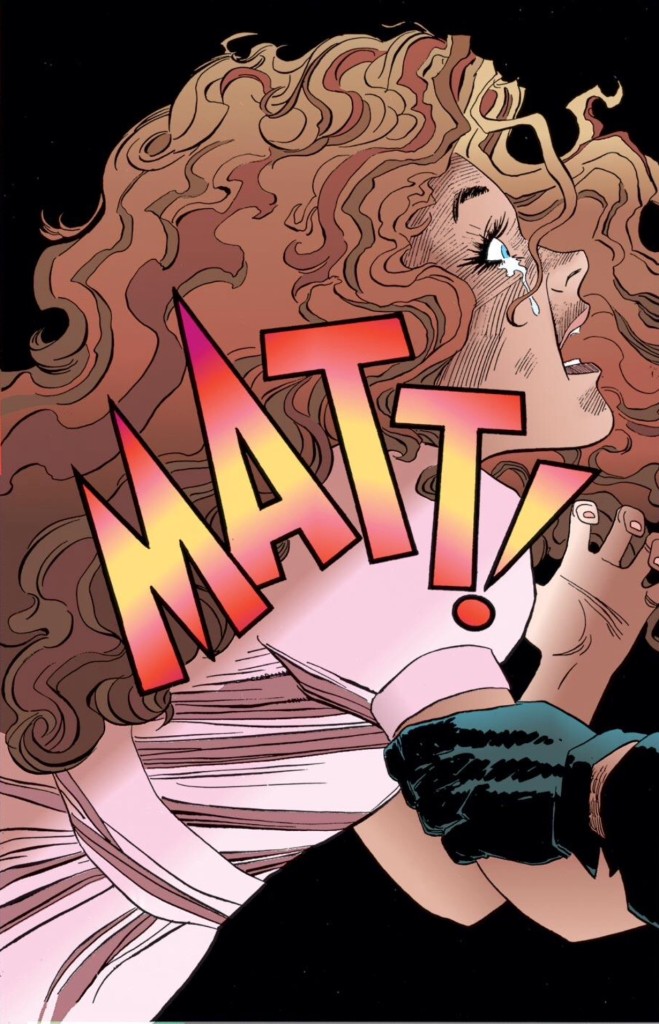 No matter how well the Daredevil TV show does, no matter whether Ann Nocenti was an influence it or not, and no matter how the world at large chooses to remember Frank Miller when that contentious bastard finally leaves us, that’s what Frank Miller wanted and John Romita, Jr. gave us: something so joyfully vulgar, it could only be comics.