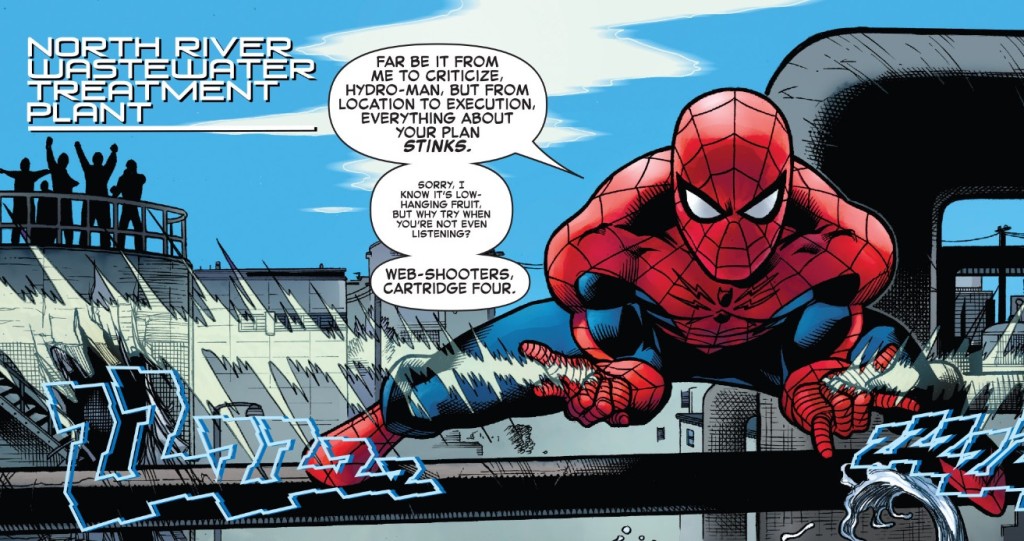 Howdy, Whatnauts!  Graeme and Matt came so strongly out of the gate with their posts—and unlike me, they didn’t even take any time off from posting at the end of the year—so I feel both the pull to do something different yet hopefully equally strong.  For a while, it was going to be a post about the nature of heroism as reflected in the work of Kazune Kawahara, but a few crazy days of work kinda shattered my ability to type anything more insightful than “Kazune Kawahara’s work is really about the nature of heroism.”

So instead, join me after the jump for me talking about two books I didn’t get a chance to talk about on our first episode of the year (which should be dropping super-soon):  SPIDEY #2 by Robbie Thompson, Nick Bradshaw and Jim Campbell, and SPIDER-MAN/DEADPOOL #1 by Joe Kelly, Ed McGuinness, Mark Morales, and Jason Keith. 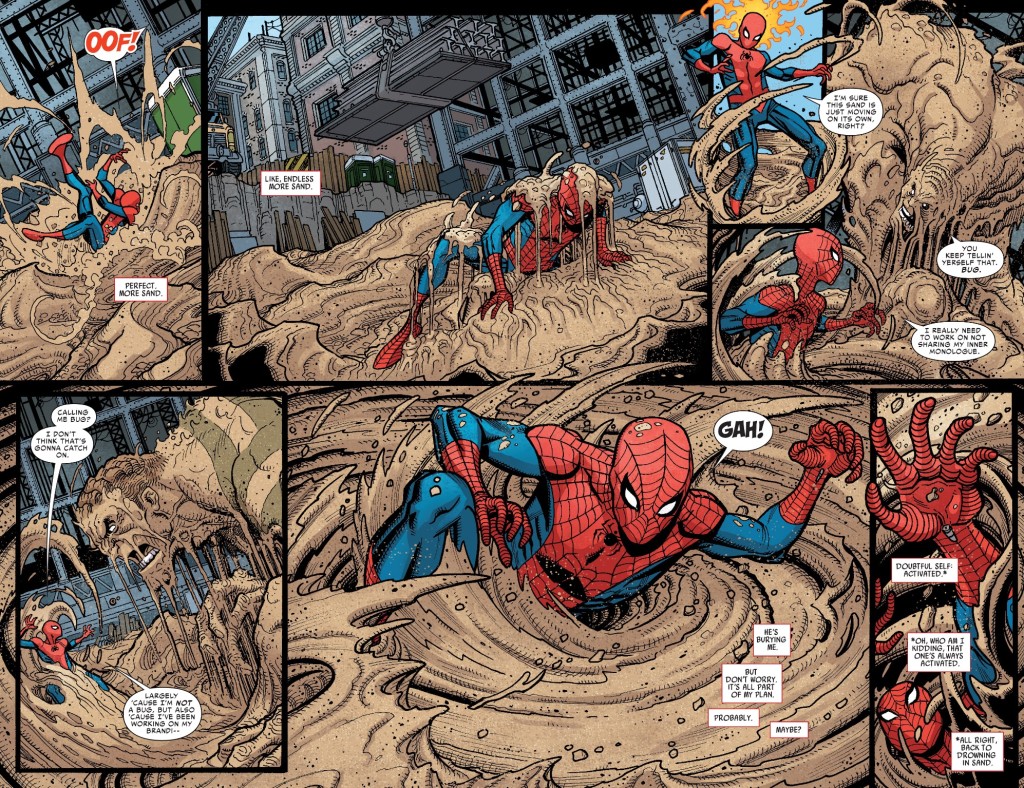 SPIDEY #2:  Thanks to my nieces, I get to spend a lot more time hanging out with really little kids, and it’s interesting to me how they react to superheroes from the Big Two.  Maybe you’re a parent and your experience is different, but Superman and Wonder Woman seem to be much more popular with really little kids than they are with the older kids, and unless you get them near a TV young, they’re almost totally indifferent toward Marvel heroes.

With the exception of Spider-Man, my nieces couldn’t give  half a damn about Captain America, Iron Man, Black Panther, Razorback, Iron Fist, or D-Man.  Even Marvel’s female heroes have no real draw to them yet.

But Spider-Man?  Yeah, they’re into Spider-Man.  In fact, as long as I’m getting anecdotal, I don’t even remember where I was but this woman was telling me how her son was so into Spider-Man, the only toys or clothes he was interested in at the store had Spider-Man on them.  This kid was, no joke, eighteen months old.

Bless his semi-insane, Ayn Randian loving heart, Steve Ditko really did manage to tap into something primal with his design for good ol’ Spidey, so much so that even kids who—and here’s my big theory—are more interested in unmasked heroes than masked ones respond to the webhead…quite possibly because with his wide expressive eyes and hyperactive movements, kids see a complete face and personality as opposed to a stoic pose and no real face on so many of the other Marvel characters. (In this theory, kids would react more positively to Thor and Hulk as well.)

All of which is my very by-the-by way of saying: I’m picking up Spidey, and I’m unabashedly picking it up for the art.  I mean, Robbie Thompson’s writing is perfectly okay if you don’t mind a story in which no effort is made to give anyone or anything any motivation whatsoever but it’s Nick Bradshaw’s art that gives this book its zing and that zing is really more to do with design chops. The bad guy this issue is The Sandman, and Bradshaw has no interest in showing Flint Marko in human form except to play with the stripes on the villain’s shirt: for the entire issue, the baddie is as much sentient sandstorm or malevolent giant monster more than he is a guy with a bad haircut and terrible fashion sense, and a lot of the pages show Spidey in full-on muck-wrestling mode, struggling in or out of a vortex of sand no less than three times in the issue. 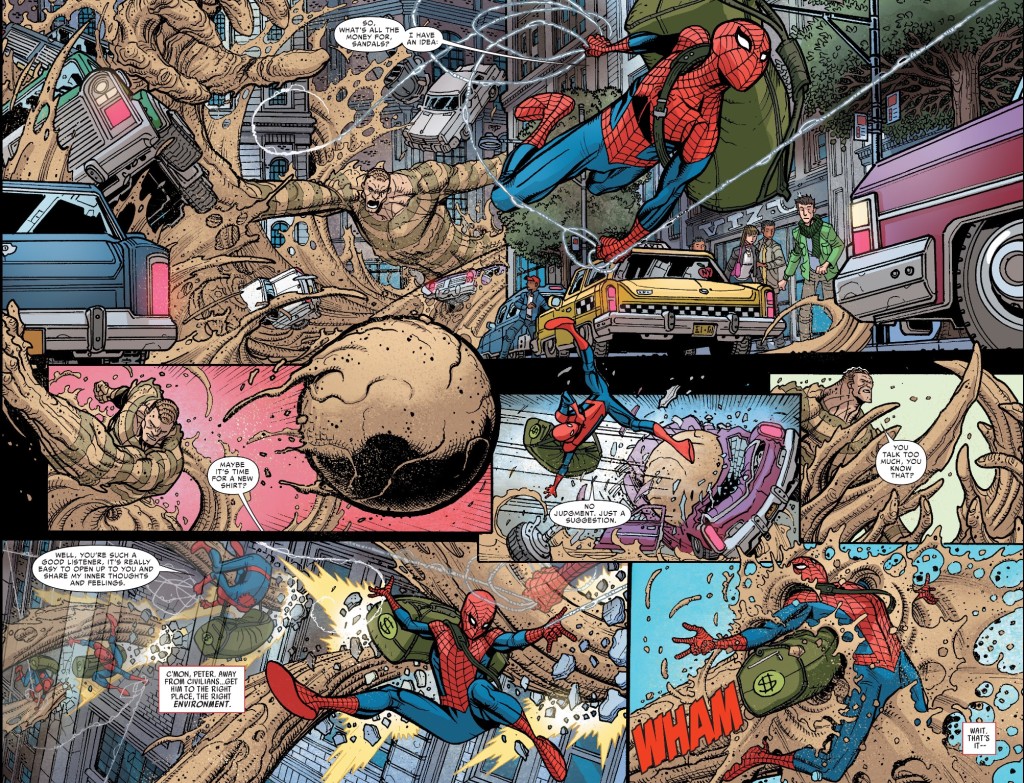 On just about any given page, Bradshaw absolutely makes your eye move, and he’s kind of a genius of breaking up his flow with little starbursts of direction and action popping out of the panels to make the pages pop. (And in this regard, I can almost forgive Marvel for their gaffe of breaking that double-page spread across the page turn in this issue: it was actually the third consecutive double-page spread.)  It was only after I re-read the issue that I realized Thompson and Bradshaw turned what used to the opening fight in a Spider-Man book—before the middle stretch of characterization, and then the next fight that either led to a cliffhanger or a hasty wrap-up—into an entire issue.  It’s not so much a done in one, as a none in one.

Which sounds like a complaint but is actually just a statement of how it is.  I’m more than okay with picking up a comic to get such a jolt of energy, no matter how fleeting.  In fact, although it’s in no way marketed as such, if Thompson and Bradshaw continue to do done-in-ones with a lot of visual pizzazz and no scenes of graphic brutality against innocents, this title might really work well as a stealth all-ages book.  My nieces really might dig it. 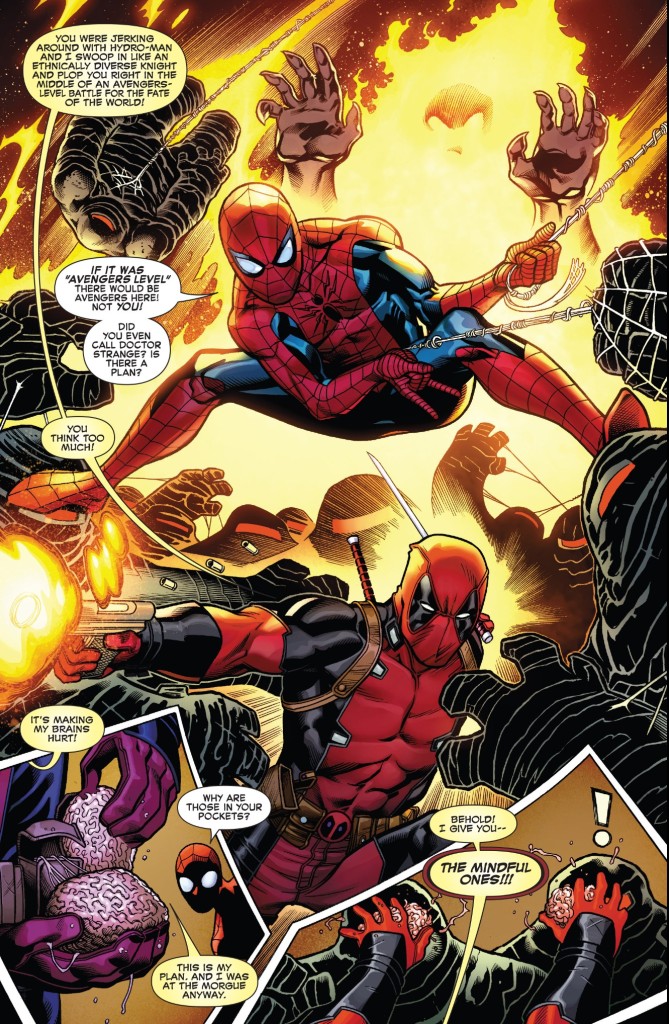 SPIDER-MAN/DEADPOOL #1:  Speaking of well-designed books, I haven’t been paying attention to what Ed McGuinness is up to, but god damn did this look nice.  I’ve always thought of Deadpool as a genius bit of synthesis on Rob Liefeld and Fabian Nicieza’s part: although he started as a Deathstroke The Terminator clone, the Merc with a Mouth is also equal parts Clockwork Orange Spidey, so it was nice seeing how much work McGuinness—with some superstar levels of assistance by inker Mark Morales and colorist Jason Keith—put into emphasizing the character’s visual differences:  Spidey is always lithe and heavy on the action crouches, Deadpool’s outfit bunches and he’s far less agile.  For a guy who didn’t really appreciate John Romita’s storytelling, I always liked how much his Spider-Man looks both solid and almost sensually sleek so I was really knocked out by what Jason Keith did with the colors on Spider-Man’s costumes, layering on several gradations in the darker end of the palette to capture that feeling. 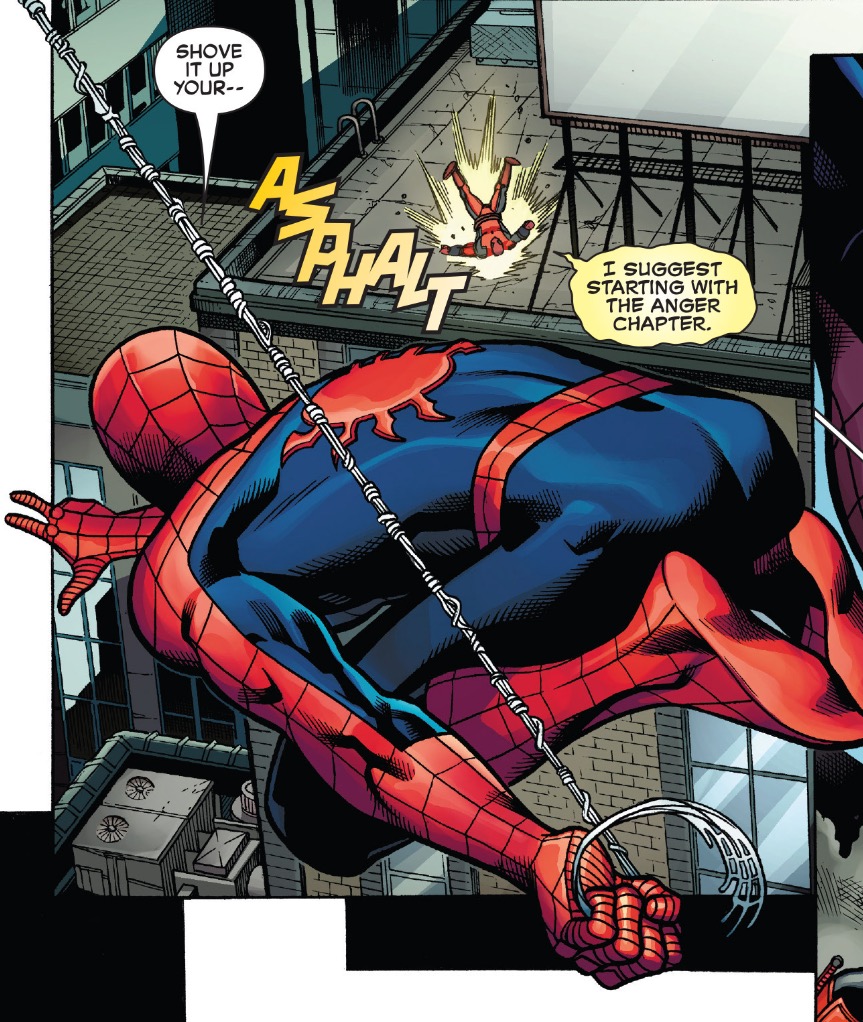 Writer Joe Kelly is also great.  I’m about as far as you can get from being a Deadpool expert, but he and Nicieza write my favorite ‘Pool, and he does a good job here of putting Deadpool into context as a cheery agent of chaos,  so much so that he uses a phone app to choose his alignment.  I’m not always a fan of comics where Spider-Man has to play the straight man, but…as long as it’s done this well, and looks this great, I’m in.

Oh, and I’m totally down with Marvel including an entire first issue of another title to build interest for their other new launches (as long as they didn’t spring it on the retailers and stick them with the extra shipping costs) but I’m not sure The Vision #1 was really the right tonal pick? Not complaining, just saying.  I mean, wouldn’t The Unbeatable Squirrel Girl, with the deck of Deadpool’s Guide to Supervillains be a better pick?

Which should lead me into this whole thing about Marvel really doubling down on the humor in their books, but there’s a podcast to edit, so….next time, maybe?