If anything, the second week of DC’s Convergence is more enjoyable on the whole than the first — if, interestingly enough, lacking anything as individually strong as the Rucka/Hamner Question series. Coincidence, or telling detail in recreating the feeling of DC’s early 1990s output? Scroll down for the latest episode of the podcast if you haven’t already listened, and then come back and click through more thoughts on the world that’s no longer coming.

The second and third weeks of Convergence programming — which center around what’re being called the “pre-Zero Hour” and “pre-Crisis” periods — should be the ones that I fall for; those are the periods of comics I read as a kid, and the ones that have deep nostalgic and emotional significance for me even now. It made the second week of issues oddly daunting to dive into, because as much as I wanted them to be good, I also knew that I’d be more irrationally upset if they didn’t live up to my expectations.

All in all, though, things pretty much worked out. There were some weaker issues — the Suicide Squad issue has a number of flaws, for example, especially a last page reveal that just plain doesn’t work because Tom Mandrake’s Lex Luthor is in almost no way resembles any other Lex Luthor you’ve ever seen (I honestly thought it was Mongul at first, which gives you an idea of just how off-model he is) — but overall, there’s a consistent level of quality across all ten issues that make them an enjoyable-enough reading experience. 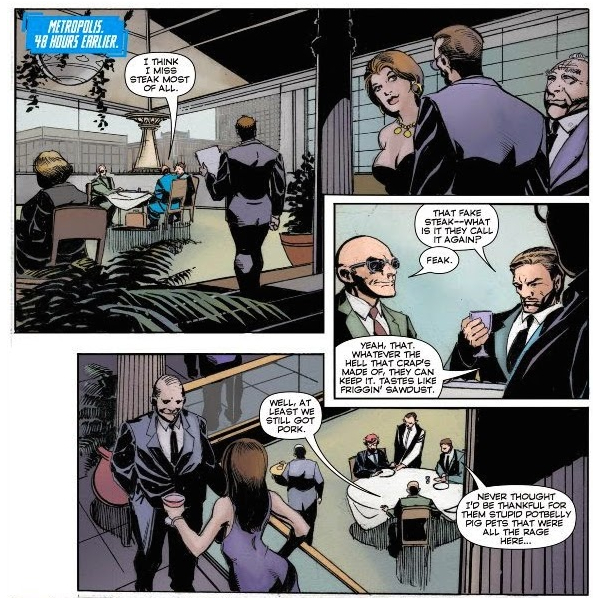 One of these men is Captain Boomerang. Guess which one from the art. Go on. Try.

They’re also a much more coherent reading experience. Unlike the first week’s contradictory issues, the second week not only manages to stay consistent, but even throws references to other issues that week into the mix, and agrees that maybe the characters are all aware of each other’s existence in the same city that they’ve been sharing for the last year. Not that it’s not entirely free of continuity contradictions, but they’re mostly in terms of individual writers disagreeing about what “pre-Zero Hour” actually means, with some characters remembering the events of the crossover itself, oddly enough.

(Part of me wondered if that’s intentional, and that the first week’s lack of continuity when compared with this week’s coherence was some kind of meta-commentary about those two respective eras’ ability to keep things on track in terms of making sense and line wide continuity and interrelatedness. It’s unlikely, I admit, but a tempting theory nonetheless. Of course, there might be some rose-tinted glasses in remembering the early ’90s as a more coherent time for the DC Universe going on here, it should be pointed out.)

Of the ten books, the highlights were surprising: Superboy and Superman: Man of Steel (the latter being a Steel book in all but name, with Louise Simonson and June Brigman coming up with what would make a great all-ages title in another time) were likely my favorites, although I enjoyed the angst-ridden Aquaman and much-more-fun-than-I’d-expected Green Arrow a great deal, as well. (Justice League International didn’t really feel like that title’s heyday, but did feel like it had called back to what followed the Giffen/DeMatteis run, so points for fidelity even if my personal taste wanted something sillier. That said, I’d happily see more of the Blue Beetle on show here, I admit.) 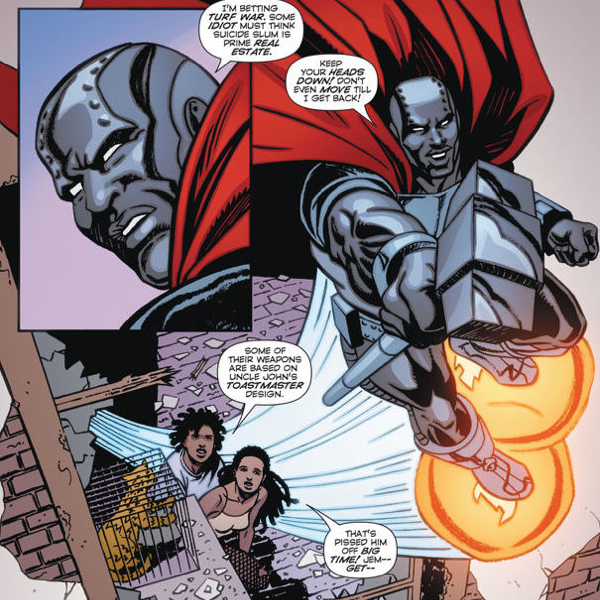 The main Convergence series also continues to grow on me, with its second issue (Really, its third, but let’s all pretend the zero issue doesn’t count) being frenetic in an old-school superhero manner. Jeff King, finally flying solo in terms of writing (Carlo Pagulayan and Jason Paz provide art, which has echoes of Ivan Reis in a very attractive way), manages to keep things going fast enough that it takes until a re-read to realize that the lead characters — the former Justice Society of Earth-2 — have little discernible personality outside of Batman, and accomplish very little… but I find myself entirely okay with that, for some reason. It feels appropriate for this kind of overstuffed, all of the heroes together, kind of a series.

So, week 2 of Convergence: more of the upswing that we saw in the first week, although I am pretty much the target audience for this kind of a thing. The third week is what I’m really looking forward to, however: if nothing else, it’ll be worth it for Jeff Parker doing Hawkman vs. Kamandi’s world and the long, long awaited return of the Detroit-era Justice League of America. DC, how did you know how to appeal so shamelessly to my most ridiculous nerdesires?