Hey, everyone.  Jeff here.  Back on our recent Q&A ep., Whatnaut Drew Meger sent us a question about what to purchase for his library.  Our answer was so impressive in its unhelpfulness he contacted us to see if we we’d be interested in the basics of library purchasing and the specifics about purchasing comics.  Of course, we said, “Hells to the Yezzz!”  (That was Graeme, of course: many of you may not know this but whenever we’re not recording, 98% of what Graeme says out loud is either “Hells to the Yezzz!” or “Hells to the Nawwzzz.”  Then he spits a bit of Skoal into an empty coffee cup.)

Anyway, we are incredibly pleased and more than a little proud to present this terrific guest post.  Take it away, Drew!

My name is Drew and I am a librarian who buys comics for his library.

At first glance, this sounds like a great job – you get to spend other people’s money on comics! Better yet, you can even read comics for work! But once you get down to it, there’s a lot of responsibility that comes with that power. The stuff you buy needs to be borrowed, you can’t buy whatever you like, and selecting the stuff you want to buy is actually a bit of a pain in the ass.

On a recent Q&A episode, I asked Jeff and Graeme for their opinions on what sort of comics I should focus on for my library — super popular “classics” of the genre or slightly deeper cuts that people might want to read but not shell out thirty bucks for? Their answer could be pretty much summed up as, “Yes to everything.” If only that were the case!

So here’s some background on what it’s like to buy comics for a library. Each library is different, but there are some common issues that stretch across systems that likely impact your local library.

First, and this is hard to admit, comics are not a huge deal for my library, which is a mid-sized library located in Danvers, Massachusetts. You might recognize Danvers for its advances in onion technology, the State Hospital that became the inspiration for Arkham Asylum, and the spot of bother we had a few years back with witches back when we were still called Salem Village. We are a healthy system, well used and supported by our community.

Here in Danvers we have a total of 111,240 things on the shelf. These things are books, CDs, audiobooks, DVDs, magazines, and so on. Out of these 111,240 things only 1,727 could be classified as graphic novels. That’s something like 1.5% of the collection. 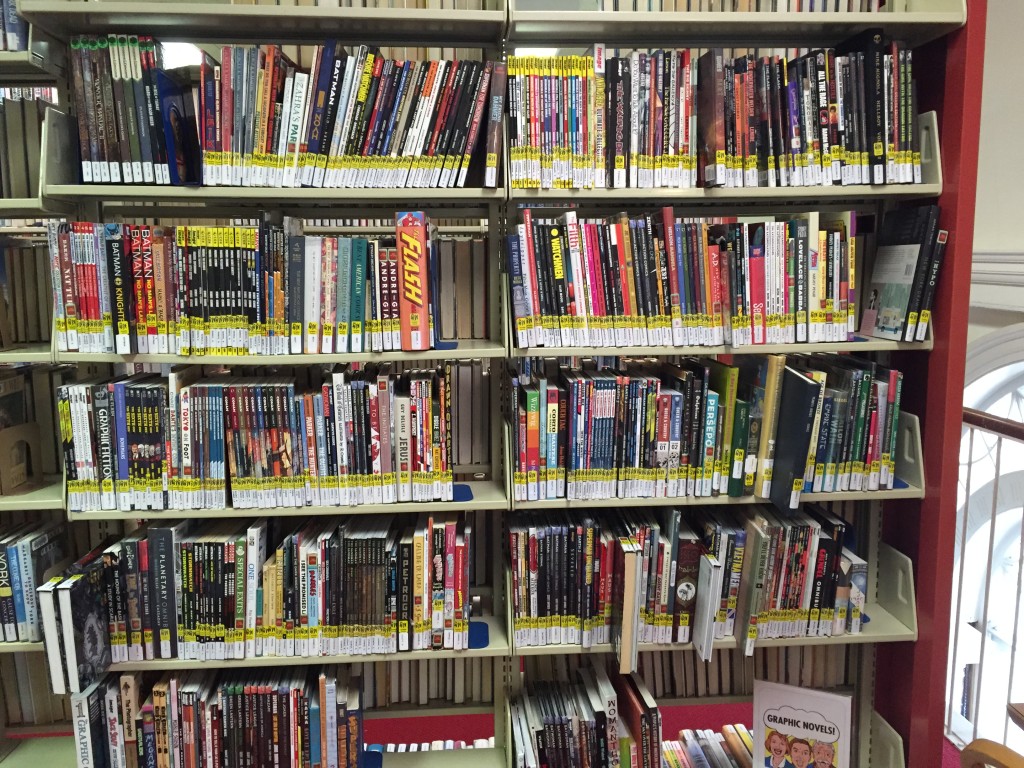 Part of our Graphic Novel collection.

Last fiscal year (July ‘14 – June ‘15), we loaned out a total of 149,393 of our things. Notice how our yearly circulation is greater than the amount of stuff we have. That’s a Good Thing—it means that we have things the community wants and don’t have to look over our shoulders come budgeting season. Not everything was loaned out and lots of stuff was loaned out more than once, but an average circulation per item of 1.34.

All these statistics just go to show that while graphic novels are a used part of our collection, they are nowhere near a huge part. From looking around at other libraries, I see that to be a pretty common theme. While we have a few librarians on staff here who are invested in comics, that’s not an universal situation. Other libraries might recognize owning graphic novels as a good idea, but they don’t know where to start and really, when it comes down to it, why knock yourself out for 2% of your circulation?

Seriously, if you don’t know anything about comics, buying lots of comics is pretty difficult. While as librarians, our mailboxes groan under the weight of review literature such as Kirkus, Booklist, Publishers Weekly, and so on, there is relatively little information on upcoming comics directed at non-fans. While these review sources might list a few of the more “literary” graphic novels, they tend to give the much more popular trades a pass. Occasionally, a publisher might send out some promotional material to libraries – I have a folder full of Vertigo #1 reprints sent out last year – but for the most part, they’re keen to the idea that every graphic novel we buy is three or four our patrons will not.

The people interested in selling stuff to libraries, book jobbers like Ingram and Baker & Taylor, do put together catalogs of graphic novels a few times a year. Problem is, as they are a source explicitly designed to sell you something, they’re not to be trusted. Also, they seem to be written by aliens with only a cursory understanding of what graphic novels are and why people read them.

I have the Fall 2015 edition of ‘Ingram Advance’ for Graphic Novels and Comics that showed up a few weeks ago. There are plenty of blurbs for collected trades that are the second or third in the series with no mention of what the first is. Heck, most of these don’t have titles, just “Collects Batman #35-40” and “contains back-ups from Batman #35-39” – and that’s on two separate entries on the same page! If I know nothing about comics, how am I supposed to know what a “back-up” is? How do I choose between them? The next page has three “titles” – a Riddler anthology, the Multiversity hardcover, and a collection based on the Injustice: Gods Among Us video game. Again, there is no indication that these titles have nothing to do with each other.

Oh, man, the more I go over this thing, the more confused it gets. There’s a helpful note that a Deadpool movie is coming in February actually on the page with two Deadpool titles (Deadpool #26-34 and Return of the Living Deadpool #1-4)  and Howard the Duck and a Dark Tower Miniseries. Lumberjanes is paired up with a Sonic the Hedgehog/Mega Man crossover because… uh? Saga volume 4 is next to Archie vs Predator. Moving through to what seems to be the nonfiction portion – nothing is really labelled – we get histories of Hurricane Katrina, Operation Ajax, and… the World of Warcraft. Seems legit. No time to think too much about that as the final two pages offer a selection of big breasted pin up art. 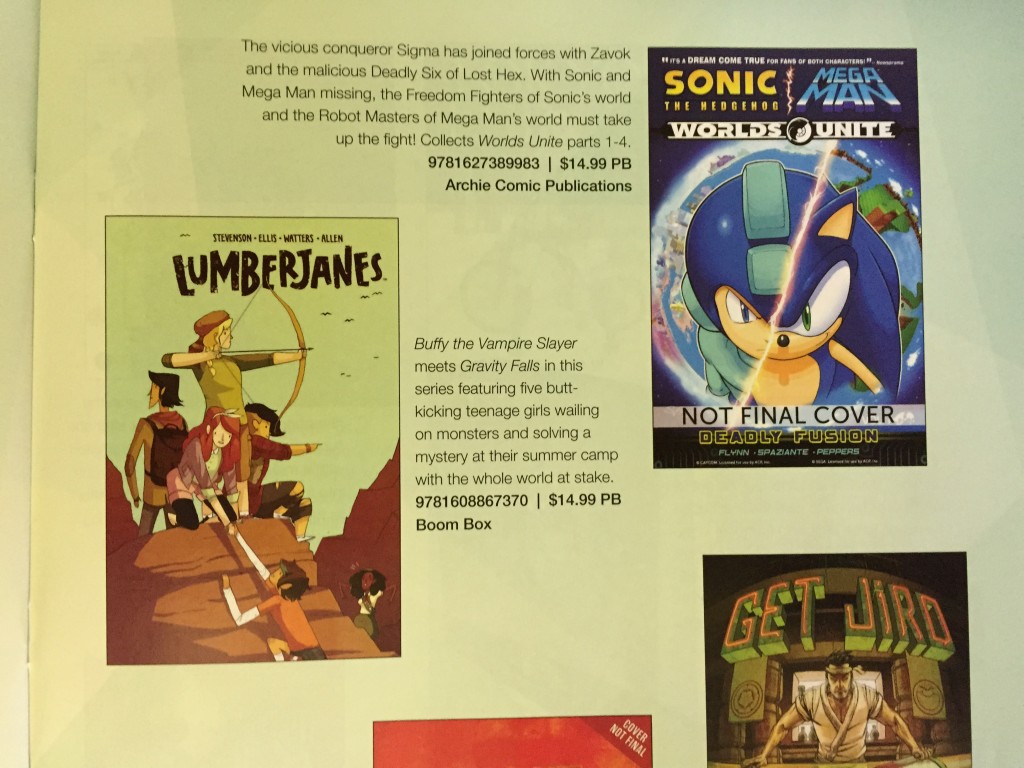 So why not get news and reviews from one of the myriad of websites, blogs, and podcasts out there? I do, but I would be reading them anyways. A librarian who is not a fan, though? CBR is the top result for a search for ‘comic book reviews’ and while it really does contain reviews of comics, those reviews are for single issues, making them useless to the trade and graphic novel buying librarian. Comic Book Roundup appears to offer trade reviews – at least until you see that they are really just averages of the single issue reviews found in the trade. Working down the search results, there are plenty more single issue review sites as well as comic media reviews, reviews of comic-based toys, fashion, and other stuff you wouldn’t be able to borrow from the library. It’s a super hassle and even your most dedicated librarian would pause to consider other options.

Remember how circulation is a big driver for libraries? Why take a risk on an unknown quantity like a new graphic novel when you could go for a “sure thing” like a DVD (average circ per item: 7.34) or a James Patterson book (4.43)? Dedicated budgets for graphic novels are rare – they usually come out as percentage of a larger budget – so you always have that alternative “safe bet” option of what to do with your money. With the budget I have at hand, after taking things like vendor discounts and tax free status into account, I can afford to buy some 1,300 things each year. Last year, I bought about 100 graphic novels. I know I could get more bang for my buck by buying more Pattersons, but I know that the evil men do in this life follows us into the next.

Also, don’t forget to check the library network to see if there are multiple copies just sitting, untouched on your neighbors’ shelves. Sometimes you can justify buying things that don’t circulate at other libraries. For example, if an item is lost or damaged or is missing from an otherwise complete run, nobody will bat an eye at you buying it. But if it’s not working at another nearby library, you need to justify why you think it will work at yours.

Even if we decide to throw statistics to the wind, ignore the budget, and care if 15 copies of the same title are available in system, we can’t just buy a graphic novel without some sort of content evaluation. Here in Danvers, graphic novels are separated into three age-based sections – Children, Young Adult, and Adult. Getting the graphic novels into the right place is understandably important – just ask me about the time Megahex, a comix featuring nudity, drug use, and hardcore owl abuse, almost ended up in the Children’s Room due to its art style. I try to be fairly liberal when it comes to buying comics – I trust the reader – but I recognize that there is a wide gulf of appropriateness between the broad fisticuffs of Batman: The Brave and the Bold and Joker’s antics vis-a-vis faces in Batman: Death of the Family (although the children’s graphic novelization of The Dark Knight really gets to the heart of Nolan’s vision). 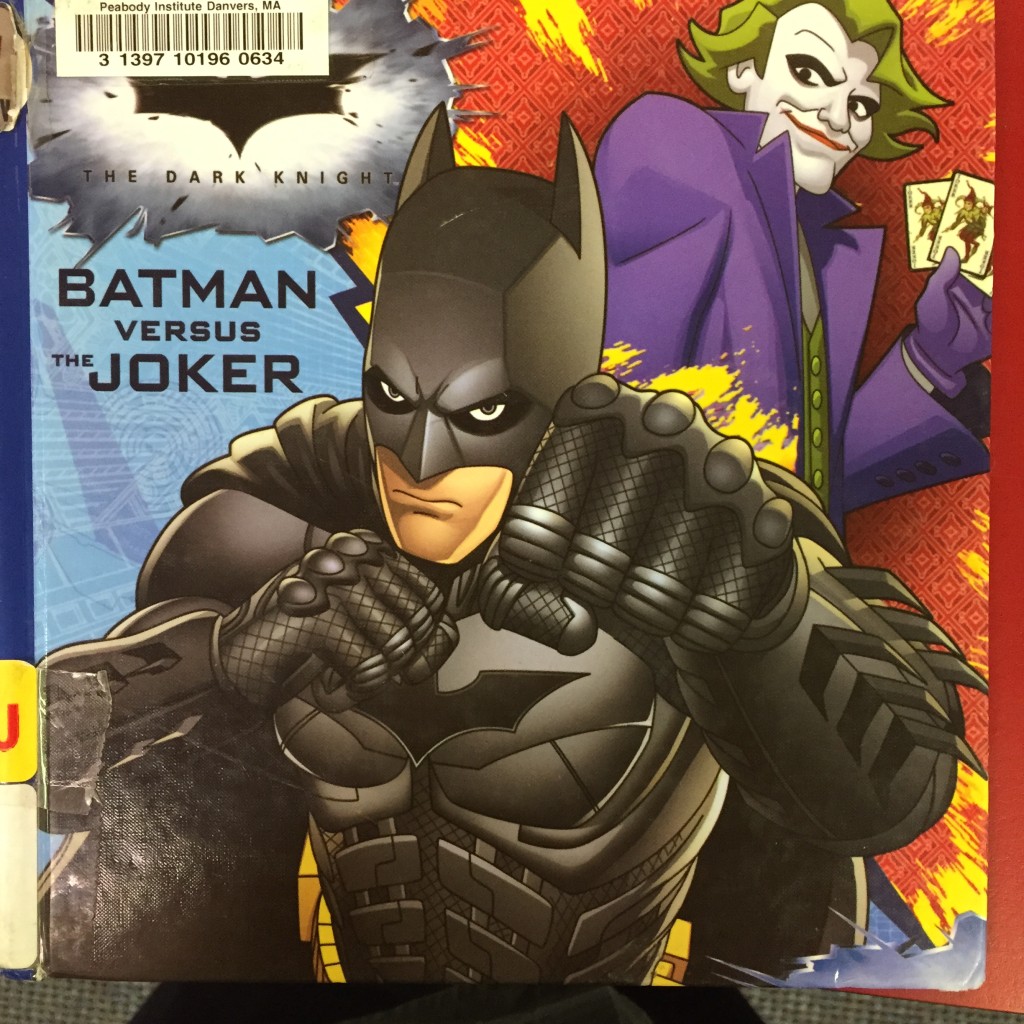 The kid’s version of the Magic Pencil Trick is, uh… interesting.

To sum up, buying comics for the library means you have to put a significant amount of work in for not that much reward. It is easy to see why many libraries end up with collections consisting of tattered copies of Hush, Showcase Presents that have been shedding pages since 1988, and weirdly drawn biographies of vaguely famous people. I persist because I remember the night I read my first comic (it was a Batman and the Dark Knight was facing down the NKVDemon who was mad about Earth Day for Reasons) and the next day when I learned how much comics actually cost (more than I had) and the following week when I discovered my local library’s collection (not plentiful, but enough).

So that’s my plight. As you can see, there are no clear answers as to what sort of comics collection we should have here in the library. Should we build a core collection of classics? Chase current fads? Just buy whatever has a movie coming out in the next two years? Show some love for the indies? If you have any suggestions, please leave them in the comments below.

Also, if you want to help support comics in your local library, here are three easy things you can do:

3 comments on “Check It Out: A Guest Post by Drew About Libraries”