If you haven’t already read Drew’s guest post discussing comics (and graphic novel, etc.) in libraries from the librarian’s perspective, you should go do so immediately. You should do this partially because my post here is something of a response to his (or, at least, offers some musings driven in part by that post), but mainly because it’s really good and informative and the sort of thing that you will be sad if you miss.

Go read that first; this will still be here when you get back. (Heck, be sure to read Graeme’s latest as well — that post has nothing at all to do with this one, but it’s definitely worth reading.)

All done? Okay. After the jump, then.

I’ve spent the better part of 15 years nursing a fairly drastic addiction to libraries in general, and their comic-related collections in particular.

I lived in Baltimore in my early- to mid-twenties, just around the block from the main branch of the Enoch Pratt Free Library, easily the biggest (and oldest) library that’s ever been my primary branch. The graphic novels were still filed in 741.5 back then, upstairs in the Arts non-fiction room, so it was something of an expedition to locate them. (I think they’ve since been moved to a “Graphic Novels” section of the Fiction room, but I don’t have much call to hit the library in downtown Baltimore anymore to find out.) I remember any number of unemployed or under-employed days where I’d spend the evenings on the couch, drinking and plowing through a stack of graphic novels piled up higher than the coffee table.

Since then I’ve gone on to borrow regularly from a pretty extensive number of library systems, including but not limited to Maryland’s Baltimore County (great superhero collection), Howard County (one of the best library systems in the country, with a robust graphic novel collection and even circulating single issue comics), Montgomery County (good for Vertigo and for kids GNs, not so hot for Image or superheroes); Virginia’s Loudoun County (decent if unremarkable, although they did have circulating video games, which was cool), Fairfax County (solid), and Arlington County (stunningly good for Image books, superheroes, and manga); and also the public library in Denver (good enough to tide me over for my two years there; I don’t remember many details).

So Drew’s post was pretty germane to my interests, and it got me thinking about why I check out the OGNs and collections that I do. And that, in turn, made me realize that I could probably get a post out of looking at the stuff that I currently have out from the library, exploring why I got each item, what reaction I’ve had, and whether it seems like a good investment for the library (based entirely on my own semi-oblivious read of Drew’s post).

(NOTES: If I’m being technical, this covers the batch of books that I returned this weekend and the ones that I got out to replace them. These books come from two separate library systems. And my personal library browsing style tends to lead me to check out anything that’s of interest and worry about finding time to read it later, rather than leaving it on the shelves and hoping to remember it when I’m back at the library. So there are quite a few books here. Sorry, other patrons of these libraries!) 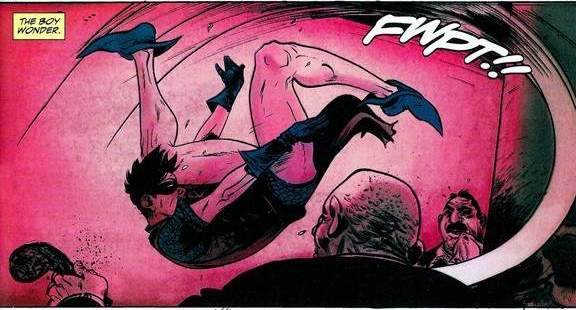 Why I Got It: SOLO was a mid-2000’s anthology book that gave each 48-page issue to a different artist and let them go to town. This massive (600+ pages!) hardcover collects the entire 12 issue run, and that made it seem like an ideal library check-out: a high price-point book  with widely-varied contents (some of which I’d read and some of which were new to me).

My Reaction: Glad I didn’t spend money on it. There’s a lot in here that I’m glad to have read, but not all that much that I found myself inclined to reread later.

Library Recommendation: Depends on clientele. I imagine this would circulate really well at a library with a lot of graphic novel readers who have broad interests but not a lot of money, but I can’t imagine it being something that the average reader is going to grab. (I have a sneaking suspicion, based on no evidence whatsoever, that the huge omnibus-style books that comics fans tend to love are viewed very differently by new readers. I think 600+ pages looks “overwhelming” and “heavy” and “unwieldy” rather than “comprehensive” and “complete,” basically.) So … maybe?

Why I Got It: I’ve lost track of Astro City over the years and have been using the library to rectify that.

My Reaction: I understand why I lost track of AC over the years — a halting, start-and-stop schedule, across multiple publishers; a narrative that it’s (ironically) somewhat easy to lose track of, as it’s self-contained and doesn’t affect 40 other books — but this really reminds me why it’s a damned shame that I did. As with all Astro City, it’s just rock-solid superhero comics, and a pleasure to read.

Library Recommendation: Seems to me that Astro City as a whole is perfect library comics — superhero comics that possess an exceptionally high level of craft and aren’t tied to a specific moment in a company’s universe-spanning narrative. Emphatic yes.

Tales of the Batman: Archie Goodwin 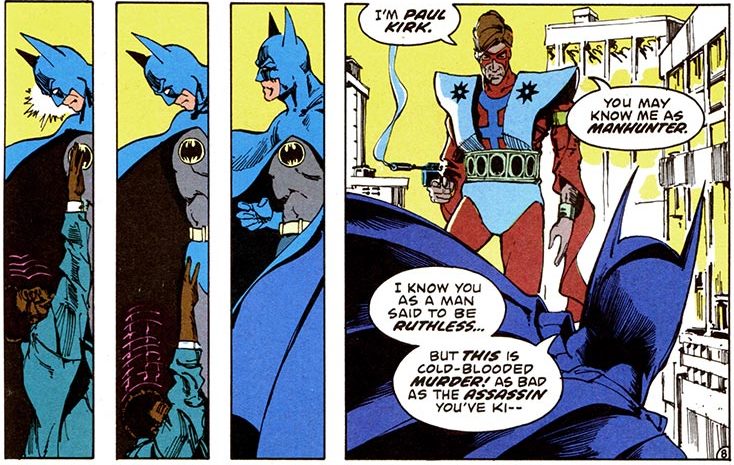 Why I Got It: Another high price point item that contained extensive material that I hadn’t read (and that also contained a nice, oversized version of the Goodwin/Walt Simonson Manhunter comics, which I love dearly). Plus it has art from Alex Toth, Howard Chaykin, Jim Aparo, Marshall Rogers, etc.

My Reaction: Another “glad I got it at the library”. The art is (predictably) glorious throughout; I found some of the older single-issue whodunits clunky in the extreme, but really enjoyed the later works from a more seasoned Goodwin. A perfect library read, but (given that I already own the Manhunter story in individual collection) not something I’d ever buy.

Library Recommendation: I … wonder, honestly. I think this is a lot like Solo — a book that someone who already knows comics, and wants to read some semi-classic past works, might want. But based on title alone, is anyone going to pull this off the shelves — that is, in Drew’s terminology, will it circulate at a decent rate? I’d guess no, much as I hate to say it.

Why I Got It: This is the current Dan Slott/Mike Allred series; I got Volume 1 because I was curious about it and kept forgetting to read it on Unlimited. Then I got Volume 2 because…

My Reaction: I loved this. I’m glad the library had it, because I might not have gotten around to it otherwise, but I thought this was a terrific marriage of fun story and gorgeous art — really, I don’t think I’ve ever like Allred’s work more. And as a bonus, the fact that I got it from the library meant that my kids found it lying around and they loved it as well — my seven-year old daughter read and enjoyed it, and my five-year old son flipped through and laughed at the silly pictures of the girl in the ladybug dress on the Surfer’s board.

Library Recommendation: Big ol’ yup. Kids (like mine!) know the Surfer from the Superhero Squad and Lego Marvel Superheroes , and this is a nice, accessible, fun superhero book that genuinely works for all ages.

Why I Got It: Because I couldn’t believe that (a) they had released a collected edition of this random mid-1990s Marvel crossover, and (b) that someone at my library had purchased a copy.

My Reaction: I haven’t read it yet. I think I might be a little afraid of it. The listed writers are Glenn Herdling, Tom DeFalco, Tom Brevoort, Mike Kanterovich, and Roy Thomas (with Paul Ryan). All I can think of looking at that list is “Clone Saga”. What if this is the more-forgotten, less-successful Clone Saga????

Library Recommendation: Obvious yes if you have enough baffled nostalgic 30-somethings wandering your library, or if you want to provide people with a book that they are deeply unlikely to spend money on. Probably a no in most real world situations, but who knows — maybe my opinion will change when I read it! (I am not optimistic.) 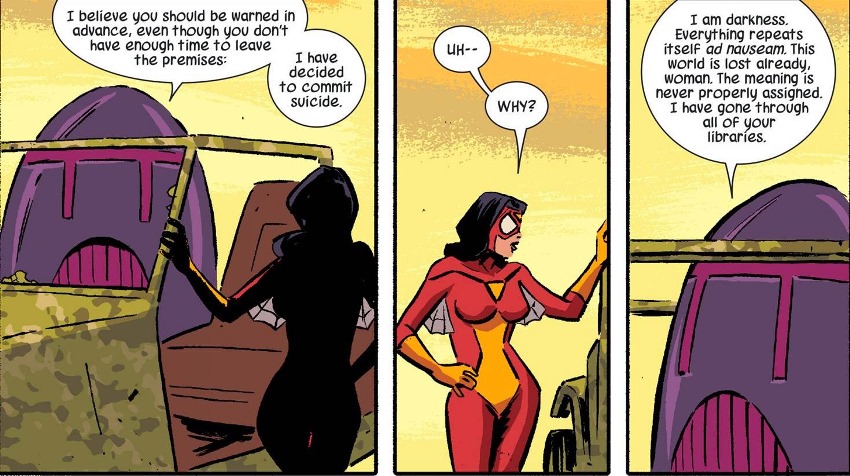 Why I Got It: Because I found it really tough to read on Unlimited (for some reason) but was very curious about. And, again, I picked up Volume 2 later because….

My Reaction: This was great. Writer Ales Kot has been hit or miss for me, and his hit rate is almost directly correlated with the number of gags or jokes in the comic — the more serious he is, the tougher a slog the book feels like. And this is Kot just doing breezy pop superheroics, very much in the ironic Matt Fraction mold, without losing his own sensibility. Artist Michael Walsh makes the jump to superheroes pretty well — I only know him from Kot’s Zero at Image– and proves a much lighter touch for comedy than I would’ve guessed from his work there. Kot’s genuine, more serious interests in the world shine through as well — the suicidal reality distortion bomb that’s played for comedy, above, is a pretty good indicator — but he finds a very successful balance here.

Library Recommendation: I would say probably yes. In both team makeup and tone, this is not unrecognizable from the movie Avengers, so anyone coming to it from that angle will enjoy, but it’s also a perfectly respectable, enjoyable superhero romp on its own. A fun book.

Why I Got It: Because for some reason I have a really hard time following the art on these on my iPad (I bought them in a Humble Bundle), but I really enjoy the stories. I’m hoping I’ll have better luck in print.

My Reaction: Haven’t read it yet. I’m terrified that I will have the same problem in print, which would make me cry, so I’m putting off that disappointment as long as possible.

Library Recommendation: I would think that a well reviewed, mainstream accessible Transformers comic is a definite yes, even if it turns out that I can’t figure out the art at all.

Anyone else out there reassessing their own library choices based on Drew’s post? Let us know in the comments…!