There are things that we just can’t untangle from our own biases, our own tastes and likes and dislikes, to see underneath and work out whether they’re actually any good or not. It happens in both directions; I have such an inexplicable attachment to Doctor Who that it dulls my critical faculties and yet leaves it open to the most random, meaningless dismissals, for example (“It’s not humanistic enough!” isn’t a reason to get grumpy at a science-fiction show, I feel, and yet). Similarly, my dislike of Frank Miller’s machismo deadens the appeal of almost all of his work. That’s the kind of thing I’m talking about. 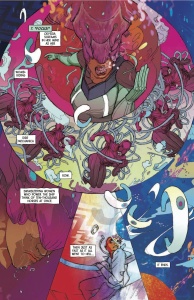 All of which is a long-winded way of getting around to admit that I have no idea whether or not Ody-C #1 is any good or not.

It is, after all, a perfect storm of things that I have problems with; Matt Fraction is very much writing in his lyrical “mythic” mode — something that he’s used in his Thor, sure, but also elsewhere; I feel like Casanova goes there, occasionally, as well — and using broken narration that

reason, neither in the breaks in the text nor the layout on the page; it’s something that other writers do as well, and it always floors me in my reading. I find myself too conscious that I am reading, all of a sudden, whatever spell I might have been in broken. Two strikes so far, and that’s before I’ve reached Christian Ward’s art, which — and this is the most arbitrary of tastes, of inner rules, I know — feels like it’s too scratchy and rough for me to read properly as the psychedelia that I feel it wants to evoke. The hand of the artist is too present, for want of a better way to put it; the slickness I associate with the colors and shapes detourned by the quality of the line and unfinished nature of the visuals. 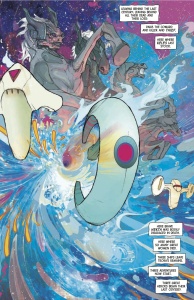 (The art is fascinating to me, I admit; Ward is, if nothing else, a wonderful colorist and an ambitious penciler, but there are moments here where it just doesn’t come together and the result feels more disappointing as a result of his ambition than it would from other artists; the wide shot on the 11th page, for instance, features faceless characters whose positioning is stiff and unnatural. Elsewhere on that same page, indistinct lifework is given form by the colors, which feel as if they’re overpowering the lines instead of supporting them. Throughout the entire book, it’s simultaneously ugly and beautiful, and I can’t quite figure out what to make of it. It reminds me of a bad trip version of Fiona Staples’ work at times, and I’m not even sure if that’s a compliment or an insult.)

(I have suddenly realized that the writing, in many ways, reminds me of the Heavy Metal-ness of Prophet that I have such trouble connecting to. But calling this book “It’s like Prophet and Saga but not really” almost feels like I’m misrepresenting it dramatically. Nonetheless, it’s not unlike those two books mixed together.)

My point being: Ody-C is a book that, based on this first issue, is very much not my bag. But what interests me about it is that it’s so not my bag that I have trouble working out what I actually thought of it. On some base level, I “know” that I didn’t like it; it’s filled with all these things that I don’t like, after all, so how could it be otherwise? I found myself reading it as if my mind was stuttering, stopping-and-starting and getting distracted, unable to stay in the moment. It wasn’t something that I could honestly say that I enjoyed. But.

But there’s something about it. There are things, small things, perhaps, but things that I found myself loving for as little reason as those things I disliked. The numbered narrative in the captions! The understated line, “Fuck the war,” so dismissive and casually intent in dismissing traditional narratives for kindness. The feeling that things are strange and uncomfortable and unfamiliar — this feels very much like Casanova does at its best, that Fraction is stumbling towards some emotional reality that’s beyond his consciousness, and I appreciate that very, very much. And those colors! Those shapes! For all my problems with Christan Ward’s linework, there really is something very beautiful happening here.

What I’m left with, I feel, is that there’s a lot to embrace in Ody-C. It’s definitely not a perfect book, but I suspect that it’s an interesting one, and that my inability to truly appreciate that is very much my own failing, and my own fault. In that way, it reminds me of what I said about The Wrenchies on the last episode of the podcast — it’s not something that I can honestly say I enjoyed, but it’s something that I find myself hoping that other people read and find a connection there that I didn’t. Ody-C, I think, deserves the attempt if nothing else.

5 comments on “Confusing, Confounding, But Not Worthless: Graeme Remains Unsure About Ody-C”