I admit, I wonder if Jaegir will be as meaningful to readers who didn’t grow up reading Rogue Trooper, either in 2000AD proper or the Quality reprints (and, if ever there was a comic book company named poorly, it was Quality). It’s not that anything in the one-shot that collects the first run of the recent 2000AD strip actually relies upon anything from that original strip in any way — on reading it in 2000AD, I somehow managed to miss that it was technically a Rogue Trooper spin-off until re-reading it a couple of episodes in — but there’s something that the extra context really brings to the strip.

Part of it is in the fact that it’s a series set “behind enemy lines” for old-school Rogue fans. Atalie Jaegir is part of the state police for Nordland, the villains of the original mythology — for all of that strip’s clear debt to the American Civil War (“Norts” and “Southers” really didn’t leave much to the imagination, let’s be honest), the Norts were always clearly based on the Nazis of old British war comics, and one of the genuine joys of Jaegir is seeing writer Gordon Rennie fill in a lot of absent mythology and history for a culture that had basically existed to declare “AIEEE! IT’S THE ROGUE G.I.! KILL HIM!!!” for decades. (That he does it while respecting the broad strokes that already were there is even better; there’s no real retconning going on here.) 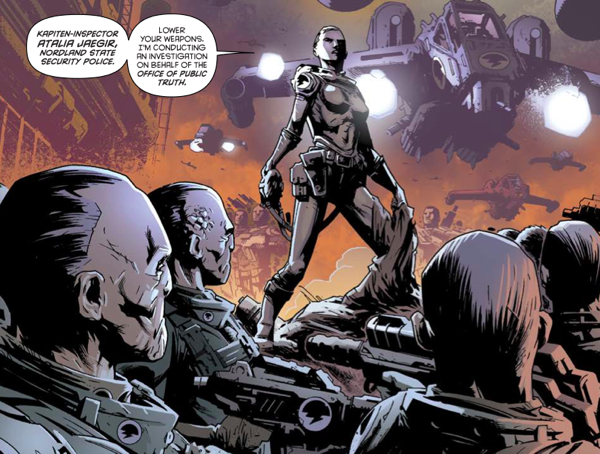 And Jaegir is a series haunted by what happened in Rogue Trooper, indirectly. It’s not that any of these characters had directly fought (or even met) Rogue, but there’s a feeling of the war as depicted in that series having led to this deep sense of loss and regret that runs through this series; Jaegir is a deeply wounded character, and her work (especially in this first series) brings her directly into contact with the mistakes made as a result of the desire to win the war.

The art, here, helps a lot — Simon Coleby’s work, and Len O’Grady’s colors, are dark and muted, convincingly selling the idea of decay both moral and physical; when you see soldiers wearing the chemsuits of the original Rogue, there’s a subconscious reminder that, oh yeah, these are not good guys. Coleby’s an artist whose work feels at home both in 2000AD and also more mainstream American comics; as he gets older, it trends towards simplicity of line and complexity of construction — he favors particular “camera angles” in this collection that influence the way you read the book (You’re never on the same level as the characters, to put it simply, and more often than not, you’re looking down on them — it keeps everything at a remove), and it’s something that’s very, very subtle but completely effective. 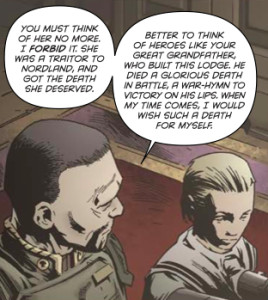 With the history I bring to Jaegir as a Rogue Trooper fan, there’s an added complexity and, almost, complicity, in finding sympathy with and for those who had formerly been the faceless villains of the piece. I can’t divorce myself from that reading, but there’s a level of quality and coherence to Jaegir that I suspect that, even for those coming fresh to the book when it’s released next week and seeing it simply as a dystopian science fiction story, it’ll read as something special, understated, difficult in the best ways and brave, in many ways, as well.

Interestingly, the U.S.-format Jaegir one-shot is released just shortly after the fourth and final Rogue Trooper: Tales of Nu Earth collection, which features stories I’ve never read by Rennie, Coleby and other creators; reading Jaegir makes me want to get the digital edition — and see if any of this series was set up there. Who knows, maybe there’s important context that I don’t get, either.

Anyway: For people who listen to us talk about 2000AD on the podcast, but have never tried it and never been tempted to pick up a Judge Dredd comic — Jaegir is out on the 27th. You should try it, and tell me what you think.