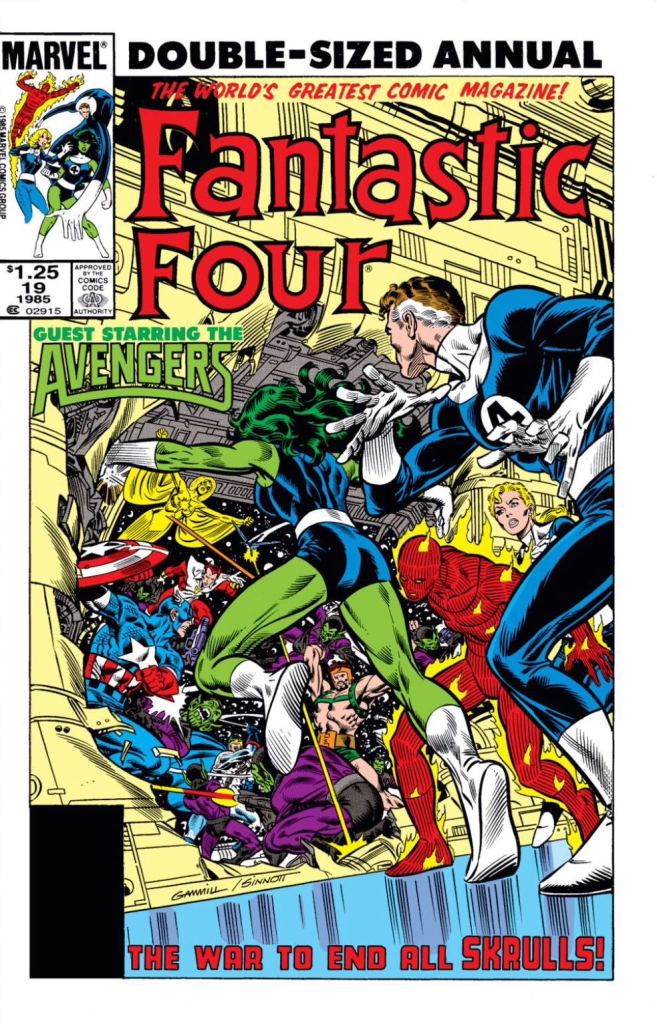 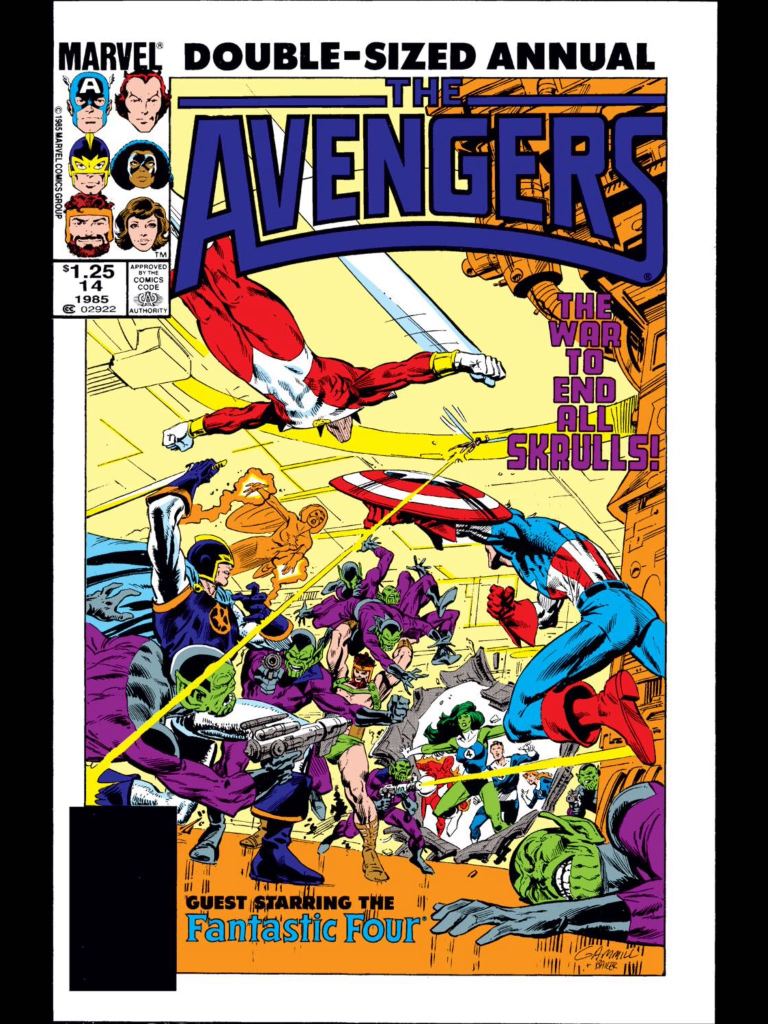 Time for my apology of the week:  not only was it my birthday on Halloween, and not only do I live in a city where my team took the World Series, but we had this crazy apartment re-flooring thing that unexpectedly went from dormant to very active in the course of about twenty-four hours and that ate up a good four days of my life.

So yeah, this is late and some of it may be frankly a bit redundant by the time the podcast goes live as I talked to Graeme about some of it.  It’s a bit of a bag of loose Halloween candy, although there may be a few more Lemonheads and small rolls of Necco Wafers than either you or I might like.  Let’s see!

AVENGERS ANNUAL #14 and FANTASTIC FOUR ANNUAL #19:  As you know if you’re listening to us read through The Avengers on the podcast, Graeme and I have skipped reading the annuals.  (Actually, it wouldn’t surprise me one bit if Graeme is reading them but not mentioning it because he doesn’t want me to feel bad.)  But I’ve been enjoying Roger Stern’s run on the book so much that when the Nebula storyline continued over into an Annual, I figured it was worth hunting it down on Marvel Unlimited and giving it a read.

And then, of course, that issue tied into Fantastic Four Annual #19, so I read that too—and that featured Raksor, the Skrull from Fantastic Four Annual #18 and Uncanny X-Men #137 (you remember that guy, he’s the one on the Blue Area of the Moon to observe the fight of the X-Men and the Imperial Guard and ends up mixing it up with Wolverine and the Kree observer). 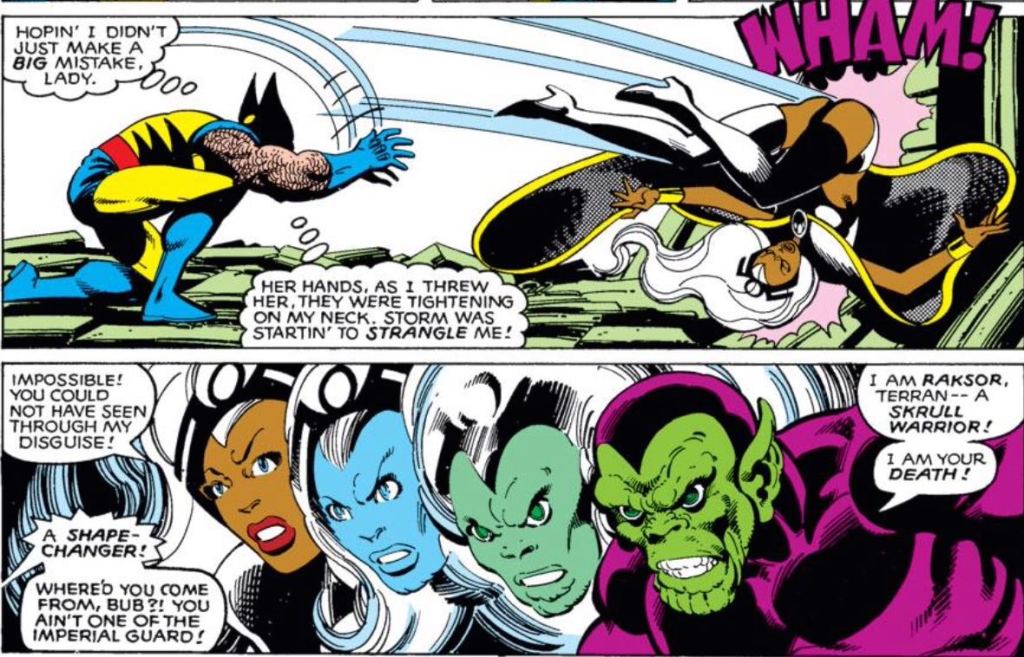 And Dudes Shall Call Him….Raksor!

Informative screenshot aside, I did not fall down a continuity hole and read FFA #18 and UXM #137…but I have to admit I was tempted.  Say what you will about the triumphs and failures of the current state of superhero comics, but there’s still something attractive to me about a minor character popping up in three annuals and The Death of The Phoenix and me finding out thanks to a tiny editor’s note in a book I read on a whim.  (In fact, if I were you, I’d put even odds on me taking a break from writing this to read FF Annual #18.)

So there’s a couple of interesting things about Avengers and FF Annuals #14:  one is that although John Byrne draws both issues and the two issues tie in so closely together that the last six pages are identical for each, they’re very different beasts.

The other interesting—and shocking—thing is that FF Annual #14, written and drawn by Byrne, is by far the worse of the two. I’ve had a tough time reconciling John Byrne, the artist I loved so much as a kid, with John Byrne, the comics auteur who spent decades refining absolutely every interesting thing out of his product, and these annuals are serious food for thought.  Considering the guy was drawing two full annuals (cheat of the identical ending pages aside) on top of his monthly book,  I would’ve thought Byrne would’ve saved his energy for the book he’d made into a monster hit but…nope.

Byrne’s story is practically Bendis-esque in its long opening sequence of an alien crashlanding into the Hudson Bay, making his way into Manhattan, and being discovered—and discussed at length—by cops before the FF get called in. From there, you have prototypical Byrne from the period: a deep cut from early FF continuity (The Enfant Terrible!), a second act twist to make Mr. Fantastic seem smart and/or the reader to feel dumb (no, you idiot, of course we’re not bringing back The Enfant Terrible!), a perfunctory action sequence (The FF vs. Fat Lady Skrull and her crew of non-fat, non-lady skrulls!),  and then the tie-in to the Avengers Annual where the Fantastic Four and The Avengers encounter each other on a skrull warship and of course assume the other group is a bunch of shape-changing skrulls taking on the forms of their friends to trick them.   After working it out in the most rational way possible, the teams join up to defeat the menace of a mad Skrull terrorist.

Overall, John Byrne the artist seems pretty uninspired by what John Byrne the writer has cranked out for him and so it’s all about as exciting as reading a Bullpen Bulletins page (if that page was actually forty pages).  By contrast, Avengers Annual #14 opens with Rakzor and his team of Skrulls breaking into Skrull prison to free Prince Dezan, the Skrull In The Iron Mask, then catching us up to date with The Avengers (having gone into space to rescue Captain Marvel, they are now hot on the trail of Nebula after she has told Starfox that she is the granddaughter of Thanos) and then making sure by page eight the team is attacked in the void of space by World War I biplanes.

Even if some of of it is as mothworn as the material Byrne is parading around in FFA #14 , the Avengers Annual keeps hopping, with John Byrne the artist being as energized by Roger Stern the writer as he was let down in FF.  (It also helps that after spending three issues of The Avengers dealing with the Skrulls, the path to the encounter between the two teams feels far more organic here than in the FF Annual.)

And this is the third interesting/shocking thing for me about the Annuals:  although FFA is inked by Joe Sinnott—one of the best inkers in comics history—Avengers Annual has breakdowns by Byrne and finishes by Kyle Baker…and it looks beautiful.  Having seen Baker’s work at Marvel from back in the day, I knew he was good more or less out of the gate, but his work in this is fantastic.  (Thanks to it being in the Avengers Annual, there’s no pun involved there.)  If you told me I would’ve preferred an inking job of his to the same work by Joe Sinnott, I would’ve laughed in your crazily hypothetical face, Mr. Straw Man!  But check out some of these lovely Baker finished panels: 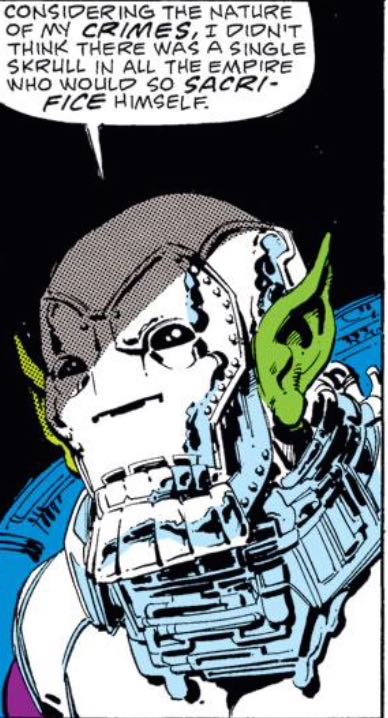 The Skrull in the Iron Mask 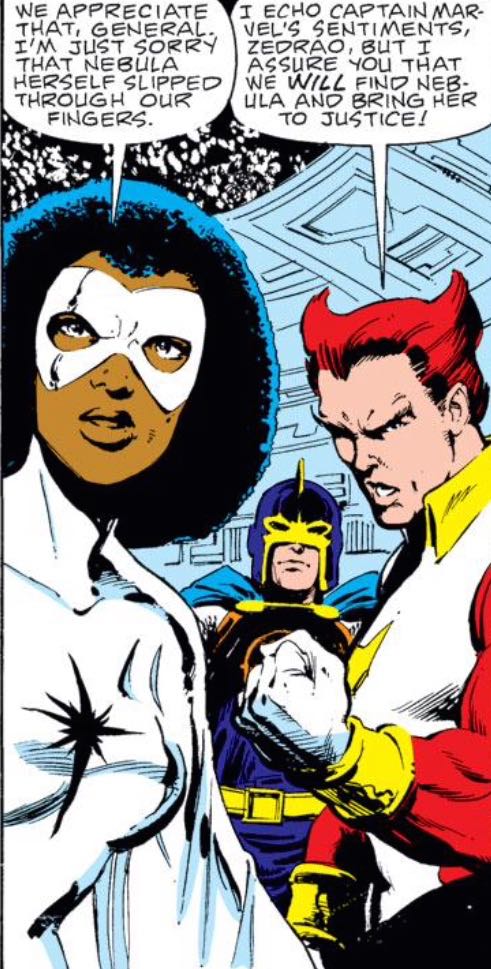 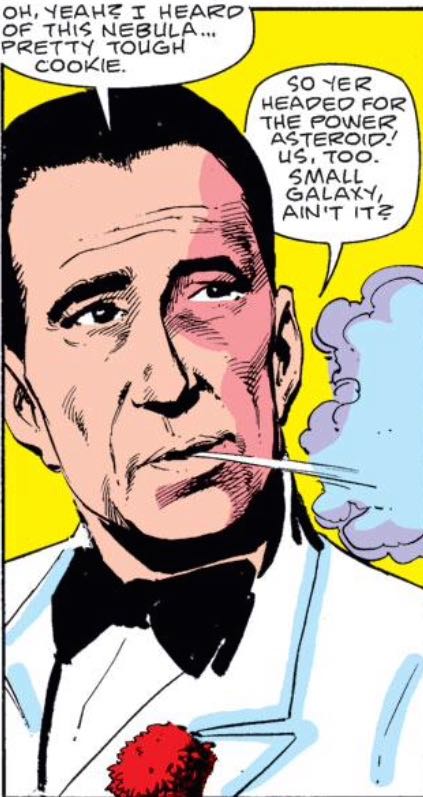 In fact, I can even show you a quick example based on the shared pages between the two annuals. Here’s the big “moment of truth” where the crazed Skrull bad guy sets off his ultimate weapon, first by Byrne/Sinnott and then by Stern/Byrne/Baker: 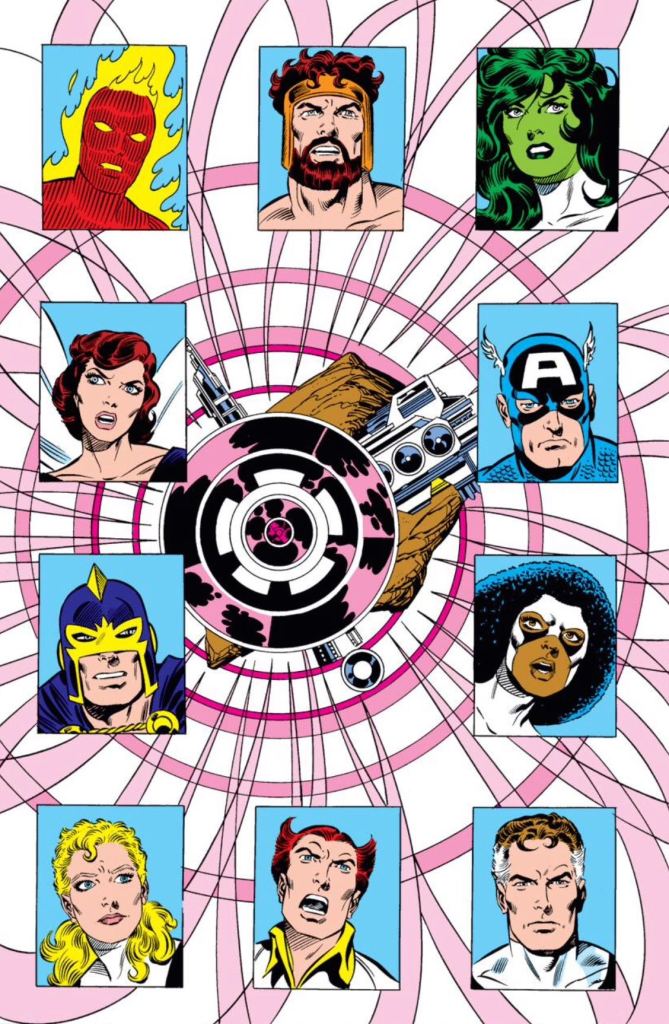 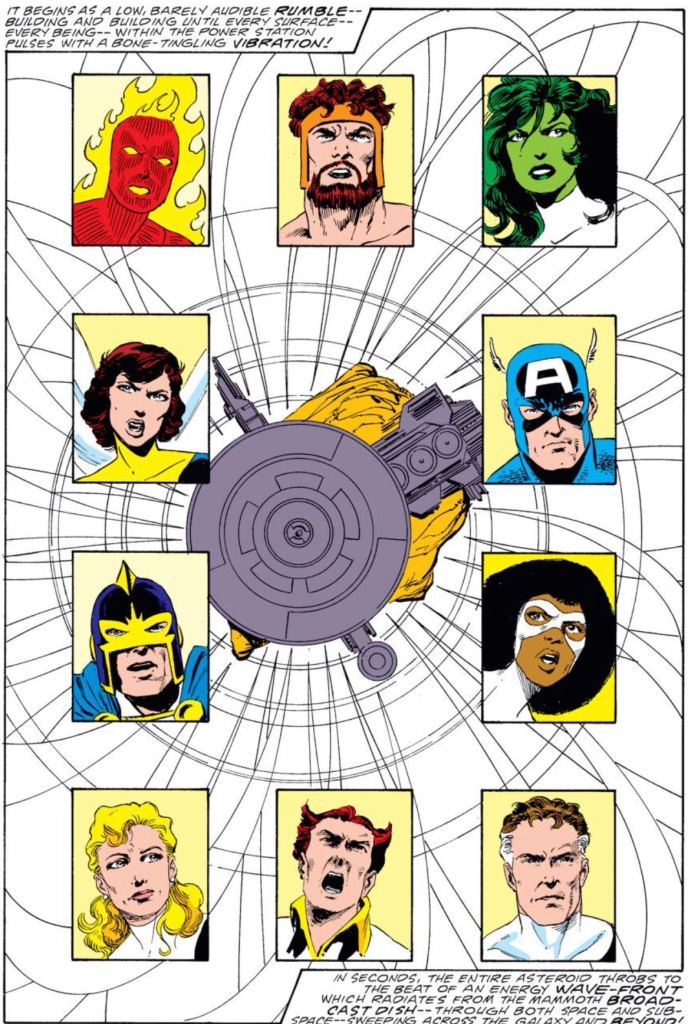 Look how, even as the colorist blows the dynamism of the skrull bomb (it looks like a hubcap), the Avengers Annual page has more heft, based on little more than Baker’s shading choices and adjustment of expressions.

And, finally, the fourth interesting/shocking thing:  although Byrne’s FF Annual is wayyyy more dull, it does everything it sets out to do.  Whereas Avengers Annual #14, driven by Starfox’s need to catch Nebula and find out if she is indeed a granddaughter of Thanos (and thus Starfox’s own grand-niece), not only does not resolve that storyline, Starfox himself disappears completely from the final pages, presumably so you don’t notice the whole story  ends up being an unnecessary digression.

The whole crossover is simultaneously pretty clever and not as clever as everyone behind it seems to think:  instead of the loose, devil-may-care continuity of crossover events past (and future), this was so tightly plotted and coordinated it seems only the colorists were left out.  The covers  even show the same scene from two different angles. But it’s worth noting both covers are, technically, kind of terrible, with the title characters being shown from behind on their own books and from weird, undynamic angles so that they look their best on the other book’s cover.

And although SternByrne show two teams grown up enough to reason out their true identities instead of just pounding on one another for a few pages, that solution is, let’s face it, much more dull than what we would’ve seen under Marvel 1.0 or 2.0.  Even as Eighties Marvel was refining the ideas of continuity in ways Stan Lee and the other creators of the Marvel Universe could never have anticipated, it was also highlighting the possible flaws in the concept itself.