It feels like a cliche to say, man, superhero comics used to be so much weirder. It feels like the sort of thing that grumpy old men say because they can’t wrap their heads around Squirrel Girl, and Civil War II isn’t doing it for them like the first one anymore, and who wants to be that guy?

Nonetheless, the primary takeaway I had after reading Justice League International #52-60 the other day — a decision brought on by nostalgia for the early ’90s and for Gerard Jones’ writing — was “well, that was strange.” 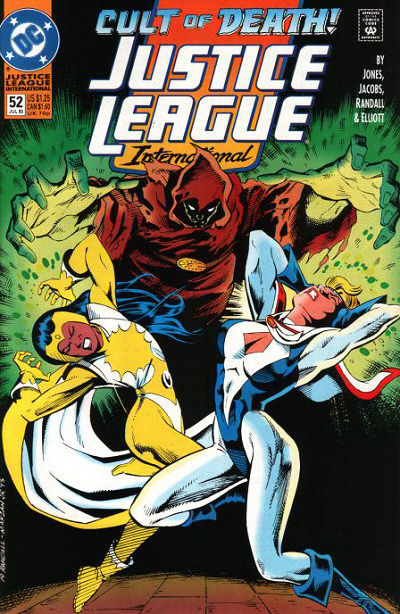 This JLI is, I guess, the second comic to bear that title, and also a forgotten series in a lot of ways…? It’s not the Giffen/DeMatteis book that everyone thinks of when the title is mentioned, nor is it the New 52 book of the same name. Instead, it’s the last couple of years of the book that launched as Justice League Europe; once the Giffen-plotted era came to an end, Gerard Jones, then a rising star at DC thanks to his Green Lantern work, took over as full writer with a young Ron Randall as artist. The book went through… a year or so, maybe more(?) as Justice League Europe under this creative team, then got renamed Justice League International with its 51st issue, which also saw Jones’ The Trouble with Girls co-writer Will Jacobs step on as co-writer. And then, things got weird.

How weird? Well, here are the plots of these nine issues:

And in the middle of this, there are subplots, because it’s a superhero team comic in the 1990s: Is Shiva growing up too fast? Who is the father of Power Girl’s baby, because she can’t remember! Is Metamorpho heartbroken about the death of his lover, and if so, is the fact that that really doesn’t seem to the case a plot point or just bad writing? 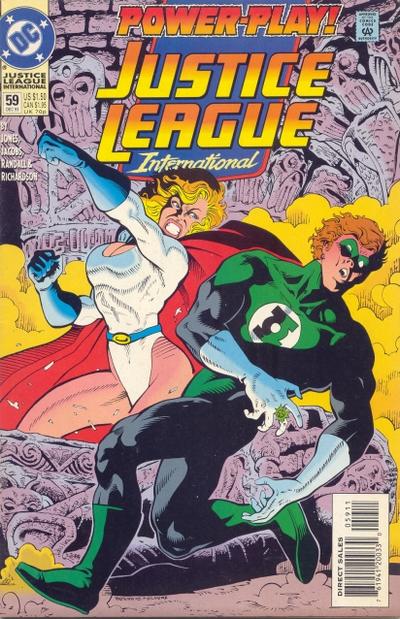 Everything in the book unfolds in this strange, tumbling narrative that isn’t necessarily fast, but feels out of control nonetheless. So much of the book seems to be nonsensical and haphazard — literally, the plot about the future war just disappears almost without a trace for three issues, and is then the primary motivator for the next two without warning — that it feels thrilling and terrifying at the same time; everything has the sense of being created at the last moment and by people who don’t have time to double check what the fuck was going on last month, dammit. It’s superhero comics as fever dream.

And all of this is illustrated by Ron Randall, whose work at the time was rarely overly dynamic, an impression only made worse by the fact that the inkers he has during this run are weirdly, mechanically precise and unbothered by the concept of differentiating line weight or emphasizing elements of the pencils for impact. There are moments that work well — and his women are consistently pretty, with that coming across as a particular point of pride for the artists, unusually for superhero comics, especially of the 1990s — but on a whole, it just adds to the idea that JLI was a series that wasn’t just not the sum of its parts, but a series where the various parts weren’t really adding up as such as pulling in different directions with none necessarily sure where they wanted to go in the first place.

(Randall has, of course, done a bunch of work that’s far more worth your time and attention; his Trekker — created both before and after these JLI issues — are probably my favorite of his stuff, and far more in tune with his sensibilities.)

These are, no doubt, “weird” superhero comics, and far more weird than anything on the shelves today. But I’m not entirely sure that they were intended to feel this weird; I suspect that a lot of the oddness comes from an indecisiveness about what the series was supposed to be, and where it was supposed to be going in the long run. Maybe the reason for the strangeness is the same as the reason for so much of my beloved 1970s and ’80s strangeness: confusion and mistakes and deadlines and the inability to go back for a redo because time was a-pressin’.

We don’t get that, now; comics are delayed, comics miss ship dates, and there isn’t really the same… I don’t know, pulpy abandon because of everything to do with Comics 2016: the self-consciousness of the creators, the over-analyzing of the audience, the price point that would understandably have had readers looking at one of these JLI issues and saying, “this really isn’t worth $2.99,” never mind Marvel’s favored $3.99 or $4.99 prices. Something has been lost, sure, in getting to this point, but there are so many reasons, I’m not sure if or how it could ever come back at this point — or even if we should really want those days back.

2 comments on “Still Crazy After All These Years: Graeme Re-Reads Justice League International (No, Not That One)”