Previously on Drokk!: Things aren’t looking good in Mega-City One; the Justice Department is starting to think that Dredd might be getting too old for the job, and that his clone, Kraken — who is probably getting over that brainwashing about killing everyone in MC1 by now, maybe — could possibly be the ideal replacement. Meanwhile, another 2000 AD strip, The Dead Man, has shown a future Dredd having taken the Long Walk, convinced that something very bad has happened to the city in his absence. Could these things be connected…? (Spoiler: Yes.) 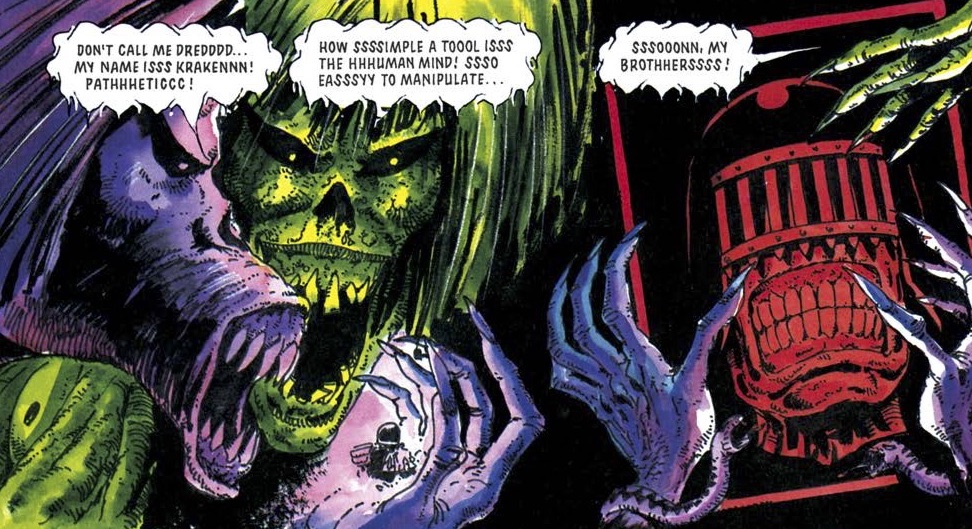 0:00:00-0:02:18: With great speed, we introduce ourselves and also what we’re talking about this time around: Judge Dredd: The Complete Case Files Vol. 14, which is pretty much all one story for once, with that story being “Necropolis,” AKA my favorite of all the “mega-epic” storylines. Also unusual: the entire case files this time is the work of John Wagner, in terms of writing, with Carlos Ezquerra handling by far the majority of the artwork.

0:02:19-0:16:57: Jeff isn’t as completely onboard with the book as I am, and we start to dig into why, especially because there’s so much that he does like. Is David Foster Wallace to blame? (The first of many literary references this episode.) We also talk about the ways in which this storyline is so unlike Dredd in its focus on continuity, and the way that might have influenced Jeff’s feelings towards it, and compliment the art of Carlos Ezquerra, and not for the last time this episode. 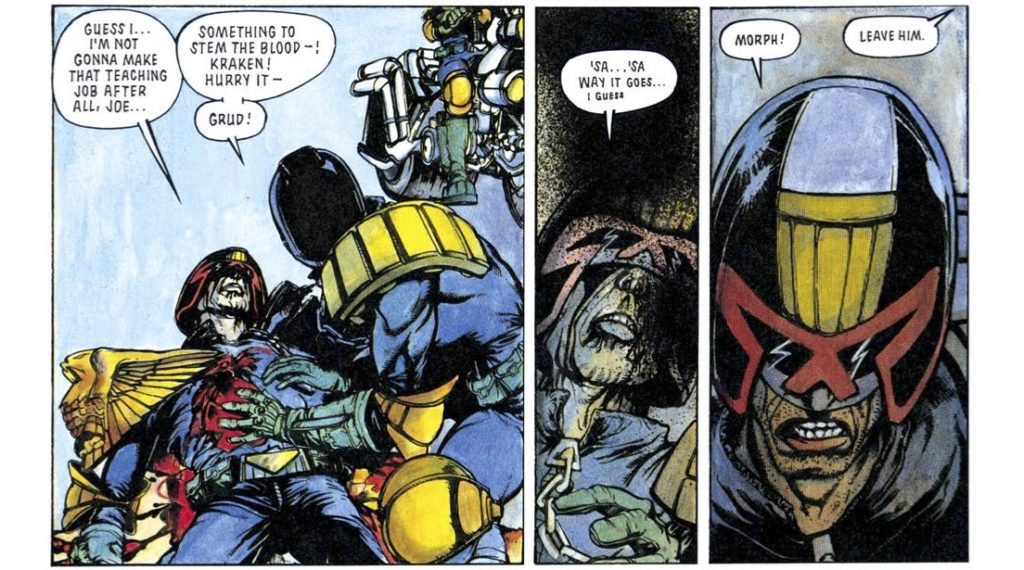 0:16:58-0:32:42: I ask whether or not Dredd’s personal evolution is a little sudden to be believable, given how quickly it seems to have occurred, leading to a discussion about Dredd’s personal assumption of guilt versus Kraken’s, and whether or not the story is also about the repeated failures of the Judges — and MC1 in general — as an institution, and the importance of looking outside of the system for solutions. (Which, in itself, is a pretty big change for Dredd as a person and Judge Dredd as a series.)

0:32:43-0:52:16: If “Necropolis” is an allegory — and, really, any argument that it isn’t feels doomed to failure, considering — then is that the reason Jeff finds the ending so overwhelming? Is there even an ending that Jeff would fully appreciate? It’s unclear, and he’s very concerned about being the Russian judge (in a sporting contest, not the Dredd sense) in seeming to score the effort too harshly, so we may never know. Meanwhile, I wonder about the epilogue stories to be found in Vol. 15, and whether those are the conclusion we miss in this book, and also complain about the time jump midway through this story. I also, as is my wont, suggest that the lack of closure on the idea of Kraken being Dredd’s shadow self isn’t as disappointing as it first appears, because Wagner will return to the idea many, many years later. Ain’t I a stinker? 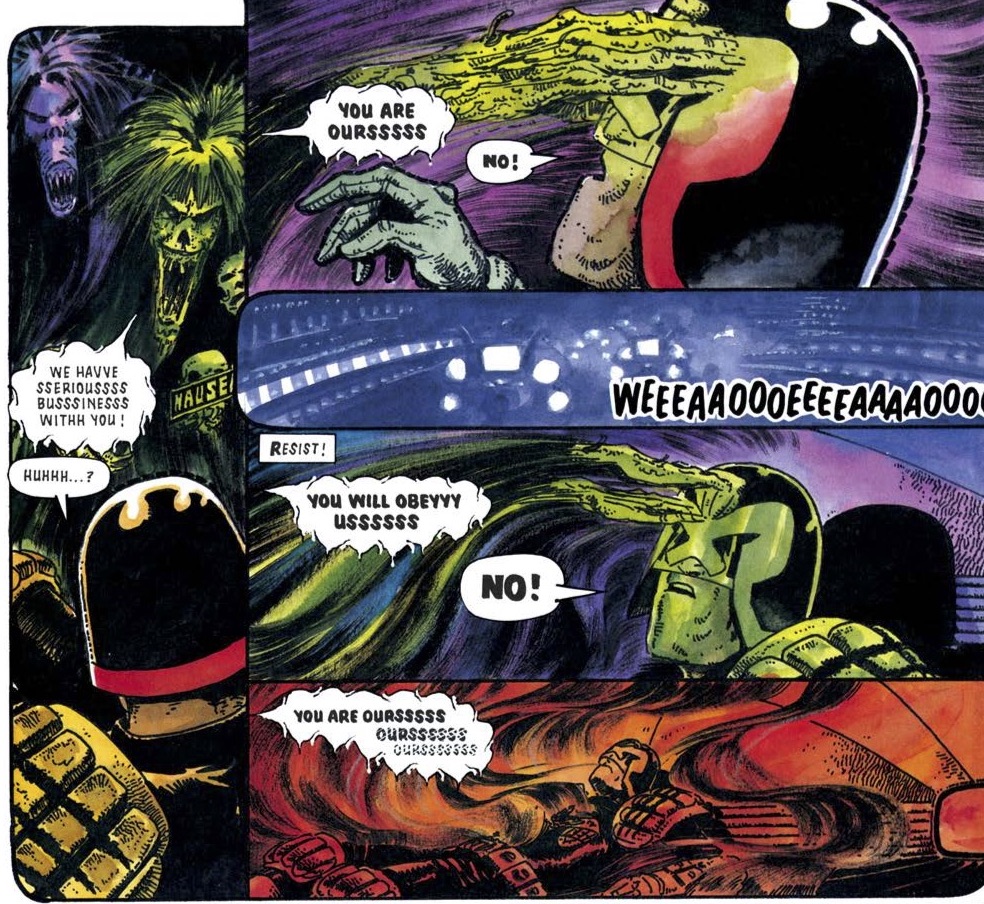 0:52:17-0:55:02: While “Necropolis” isn’t a story about a virus outbreak — a surprisingly common theme in Dredd, as it turns out, if you think about “The Cursed Earth,” “Block Mania,” “Sin City,” and “Day of Chaos” to name but four examples — that doesn’t mean it’s not a story that’s occasionally uncomfortable to read in our current pandemic reality. We unpack that (very) briefly. 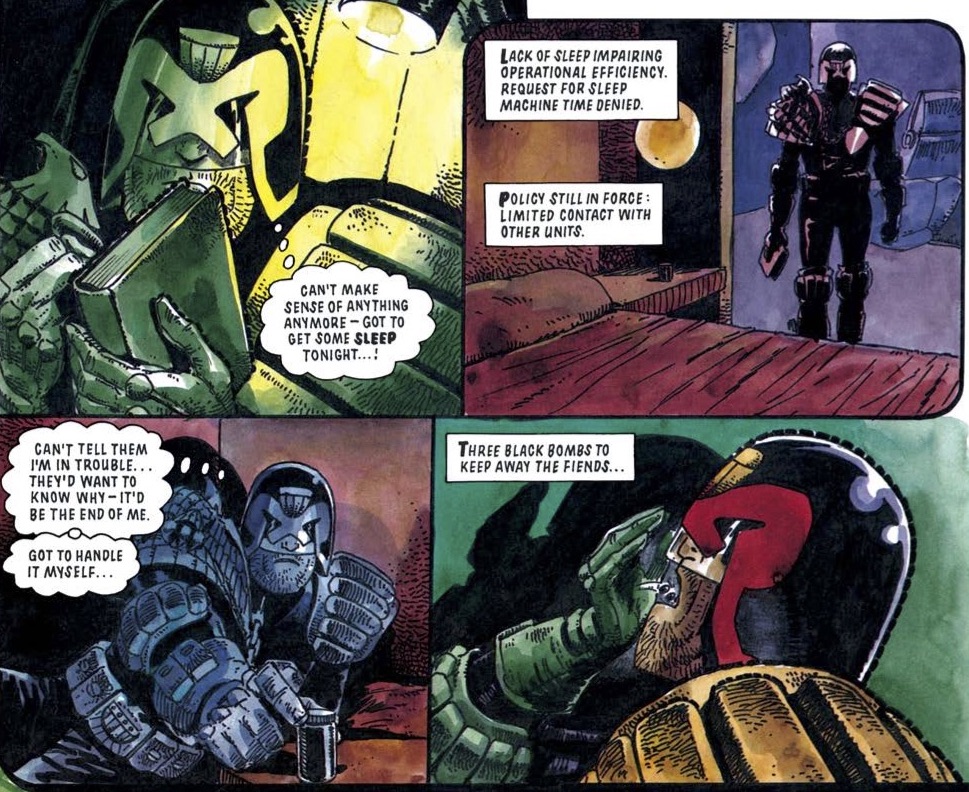 0:55:03-1:47:16: Having made it almost an hour without actually telling everyone what “Necropolis” is about, Jeff and I try to run through a plot synopsis of the storyline, something I foolishly think will be easy… only to continually distract ourselves with all kinds of other matters. Is there a James Ellroy reference to be found in Kraken’s plight? What is the connection between Kraken and Charlie Brown? How great is the return of Chief Judge McGruder, and what does she bring to this storyline and the strip as a whole? Just how important is empathy to this storyline and what and who Judge Dredd will become? How touched were we both about the fact that Dredd can finally forgive Kraken, after everything, and also put himself in Kraken’s oversized boots? And, perhaps most importantly of all, how does that whole “lawgivers will explode if someone else tries to fire them” thing work, anyway, given how this story plays out? Here’s the thing: We don’t really get to the end of the synopsis, entirely, but you can work it out if you’re paying attention. (Look, I said we got distracted.) 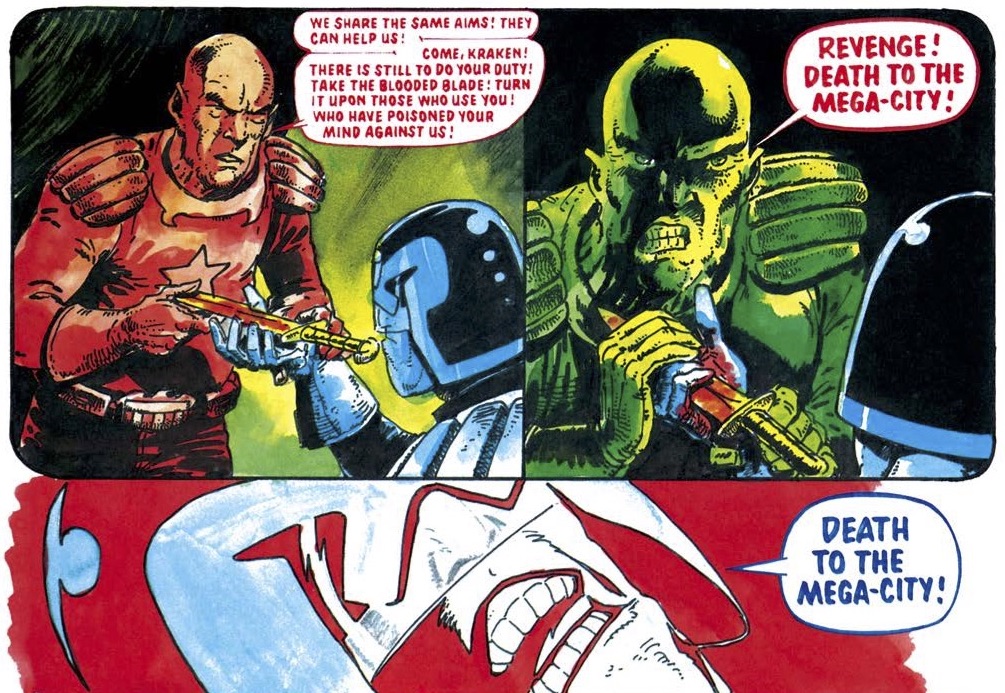 1:47:17-2:07:16: You can tell how well we work, given that I try and start us talking about things about the story that we like, and Jeff immediately brings up the suggested racism in the story. Perhaps that’s because it’s hard to pick specific favorite moments out of this extended narrative, though both of us try: Jeff goes for Kraken’s corruption dream and how headfucky things get for him in regards to Kraken’s deprogramming and reprogramming, while I get very excited about the slow oncoming dread of the first eleven chapters of “Necropolis” proper. Also! Are you surprised just how dark a story about a city overcome with dark forces actually gets? I was! And Jeff prefers “The Apocalypse War” to “Necropolis,” but everyone’s allowed to be wrong sometimes.

2:07:17-2:13:53: I’m in two minds about where to go next, so I literally ask Jeff — which leads to the decision that we’re covering Judge Dredd: The Restricted Files Vol. 2 next month — and then we start talking about the short term future of Dredd the strip as the Case Files move into the 1990s. I’m not excited, but Jeff remains optimistic that the Garth Ennis stories are better than everyone says they are. 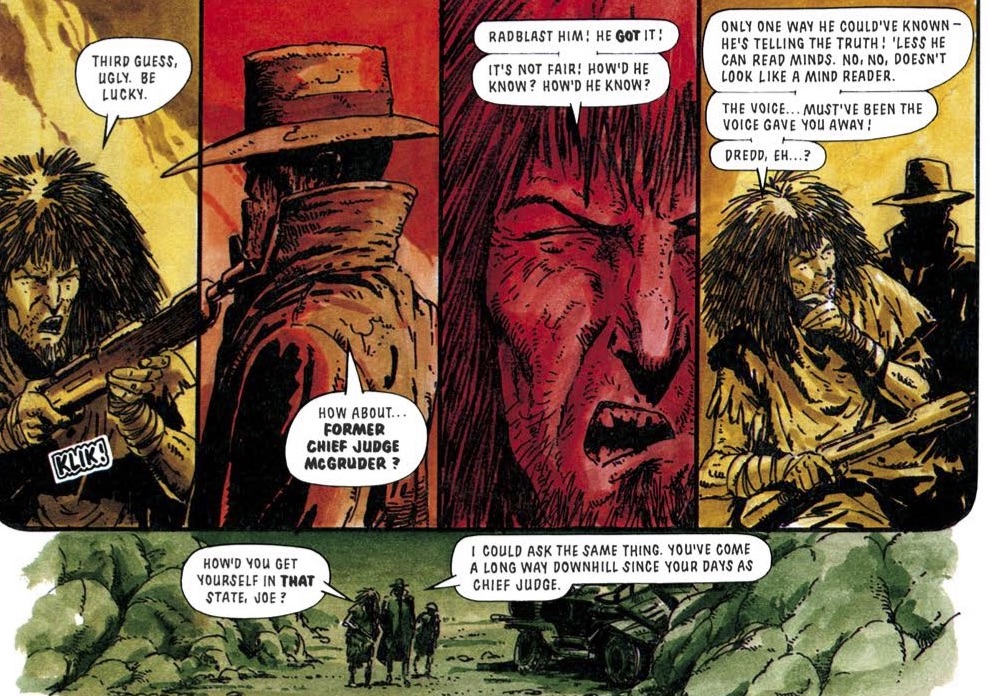 2:13:54-end: Eventually, we wrap things up by telling you about the Tumblr, really-not-as-dead-as-it-seems Instagram, Twitter and Patreon accounts and wishing you all good health and smart choices in these trying times. As always, thank you for listening and reading along. Next month: We return to the Wagner/Grant era for stories from specials and annuals! So that’ll be a little bit brighter and less pessimistic, I hope. 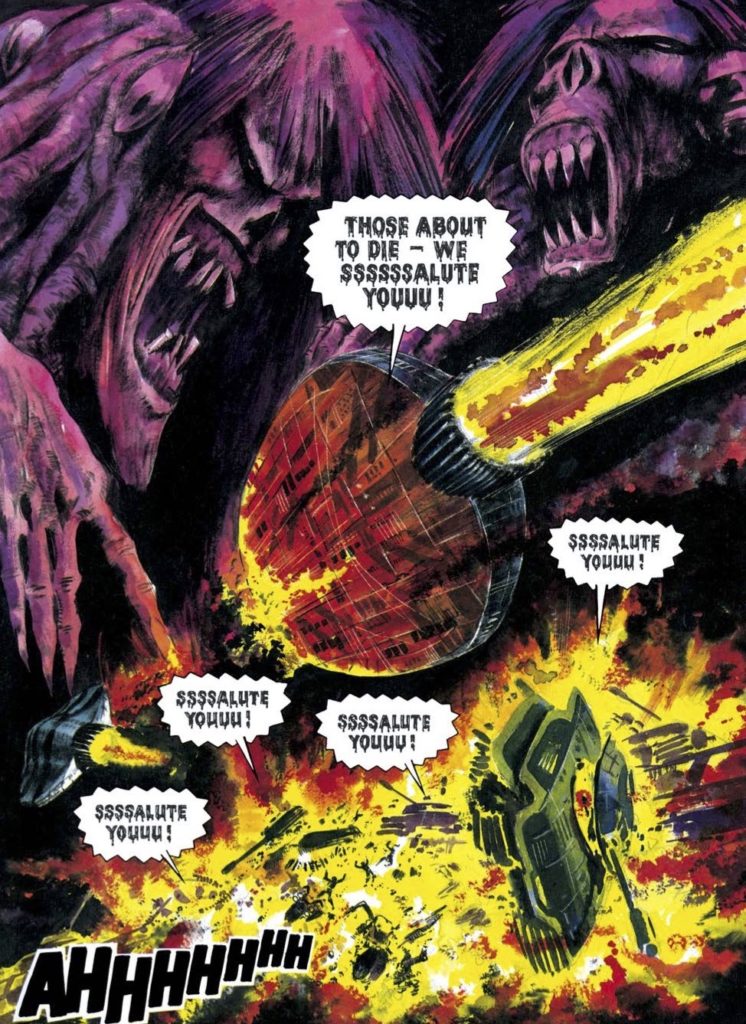