Previously on Drokk!: The eighth volume of Judge Dredd: The Complete Case Files was the first to leave Jeff and I underwhelmed, and doubting whether it was possible that Wagner and Grant, who had seemed near invincible for the run so far, had utterly lost it completely, or whether they were just in a lull and recovery mode… 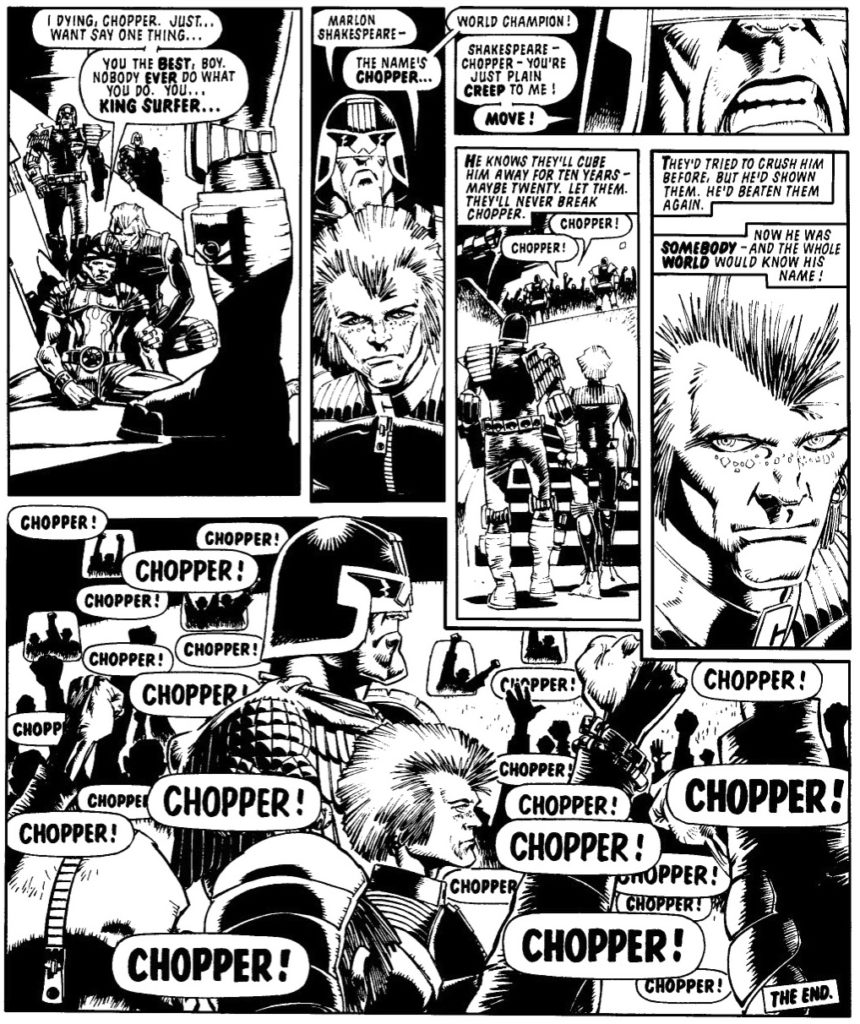 0:00:00-0:04:49: As we introduce ourselves and the fact that we’re covering Judge Dredd: The Complete Case Files Vol. 9 — AKA stories from 2000 AD Prog’s 424-473, from 1985 and 1986, written by John Wagner and Alan Grant and illustrated by a bunch of people — Jeff and I also very quickly get into the weeds explaining the references in the names of our particular city blocks this episode. It’s not a great start, let’s be honest. 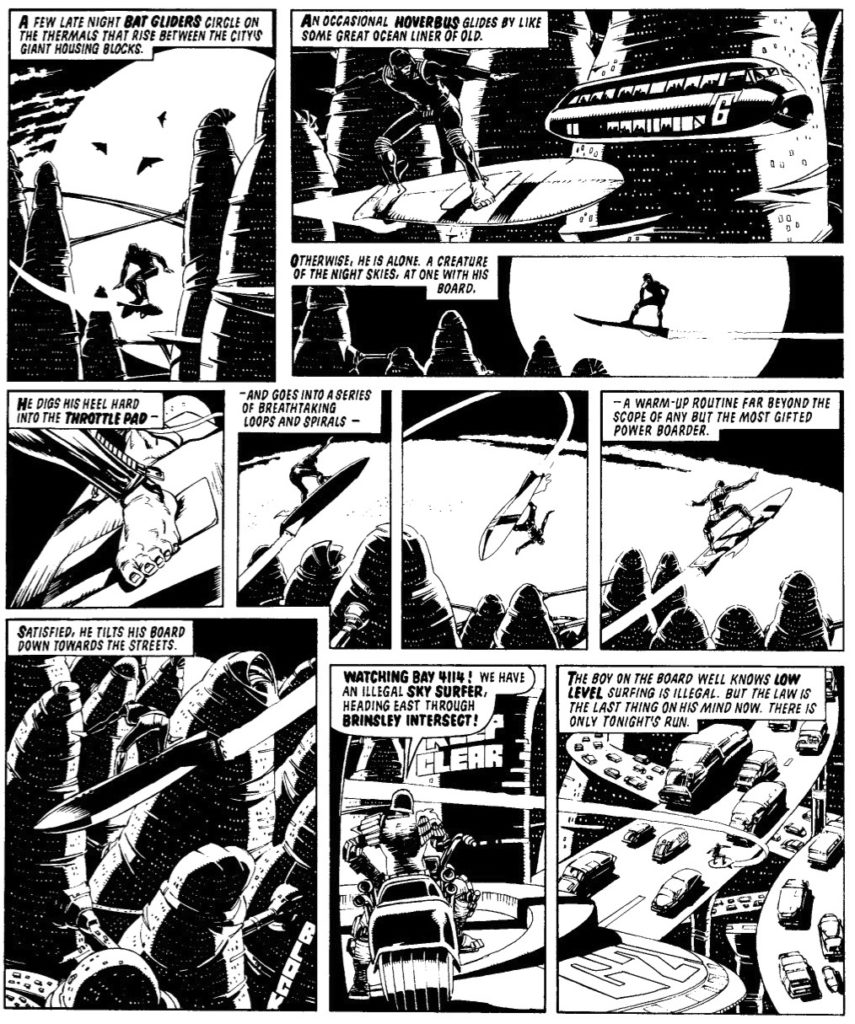 0:04:50-0:26:56: You know what is a great start? The first story in this volume, “Midnight Surfer,” which boasts some amazing artwork from Cam Kennedy and supremely confident writing from Wagner and Grant, who clearly have their mojo back and then some. We talk about both things, and also why this story is the ideal introduction to this book, as well as Chopper’s place in the wider Dredd narrative as a hero, Dredd’s place as, as Jeff puts it, “an instrument of the government,” and also Jeff’s joy of balancing his ignorance of what’s to come with my, and the commenters’, knowledge of future storylines. All this, and whether or not Dredd shaves in our personal head canons! 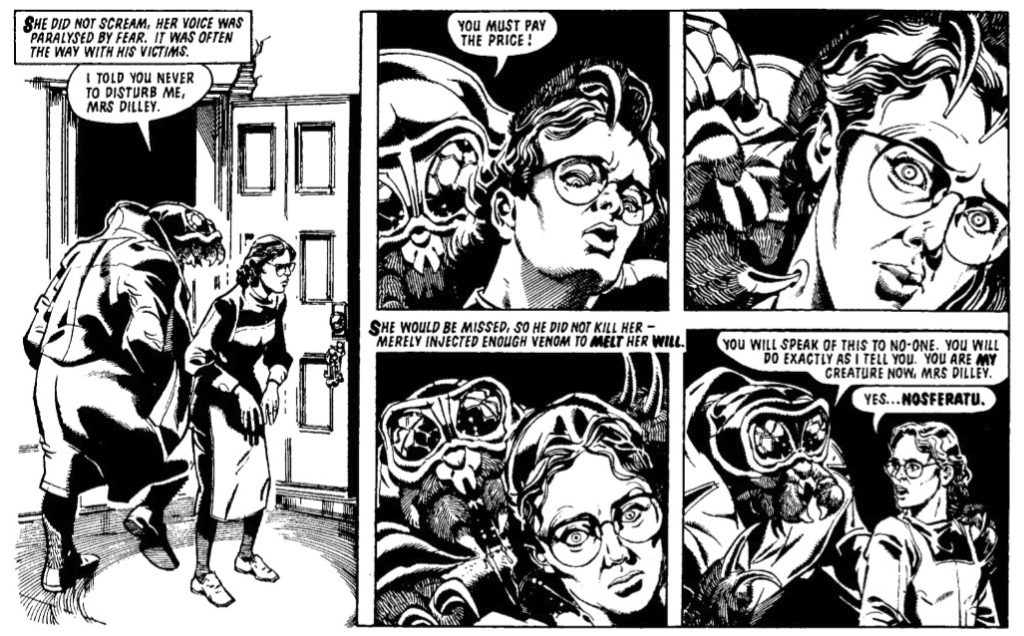 0:26:57-0:31:41: The unmistakable greatness of “Midnight Surfer” is followed by the… dubious pleasures of “Nosferatu,” which I describe as being “shambolic on some level,” yet nonetheless not without its charms. Why do Wagner and Grant return to such generic monster gimmicks on a recurring basis? We talk about potential answers. 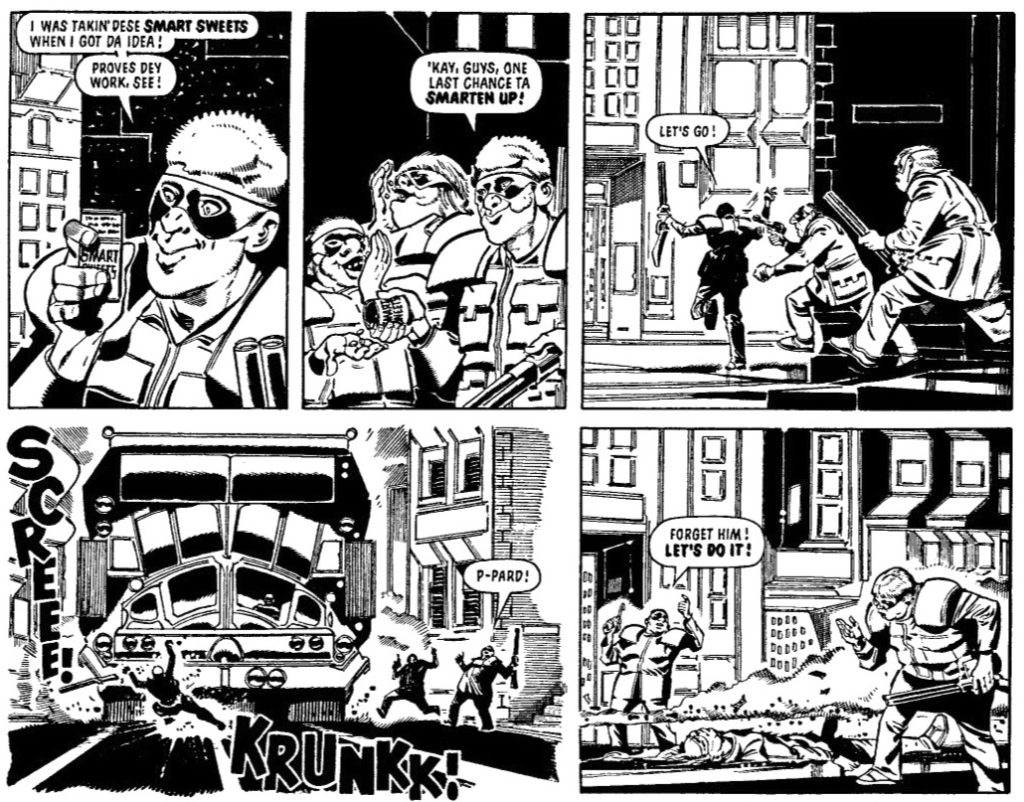 0:31:42-0:50:54: In a relatively wide-ranging section, we talk about the value of stories not outstaying their welcome in this volume, and the fact that this allows Wagner and Grant to both follow their interests and show off their diversity, even as their showing off may prove to be less showy than, say, Alan Moore. This leads into a discussion of influence — I ask whether Jeff can see the influence of Wagner/Grant (Really, Wagner) and Pat Mills on Alan Moore, and Jeff counters by talking about the clear influence Wagner/Grant had on Garth Ennis. Somehow, from there, we talk about the relative impact of Dredd as a strip relative to its strengths as great comics, and then get briefly into some of those strengths: namely, the expositionary powers of Wagner and Grant and the fact that these comics were written for children but not written down to children. 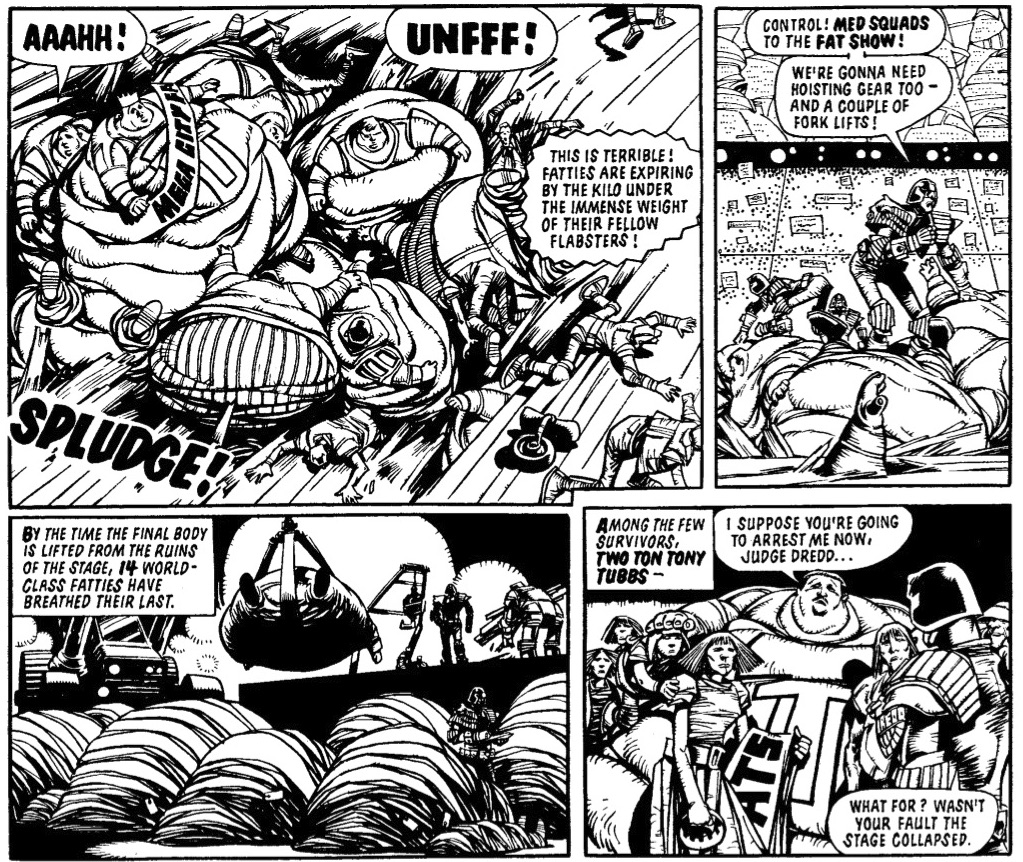 0:50:55-0:55:39: Another brief diversion, as we pit Otto Sump against the Fatties, as Wagner and Grant revive two running jokes once again in this volume, and Jeff and I have different favorites, and different reasons why each story works (or doesn’t) for us. Who knew that Jeff wasn’t into happy endings? 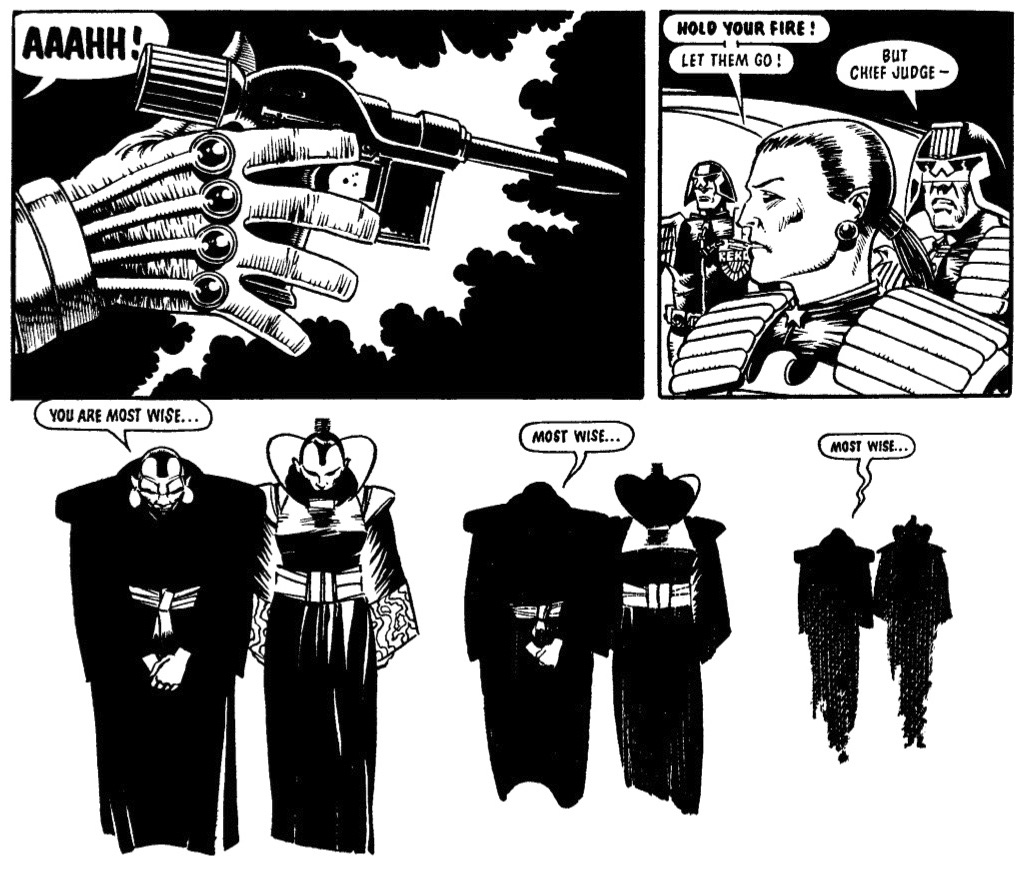 0:55:40-1:11:14: It’s not all greatness in this volume, as our discussion of the (almost impressively racist) “The Warlord” story underscores. We talk about cultural differences on either side of the Atlantic in the mid-80s, the failures of this story outside the racism, but also the things that come closest to saving graces: Cam Kennedy’s artwork, and also the surprising impact of continuity on this storyline’s final episode, but also the aftermath of it all. Slow world building — and the fact that Jeff and I have read nine years’ worth of this strip over nine months — means that, when the story suddenly and unexpectedly leans on the mythology of it all, the result can be surprisingly effective. 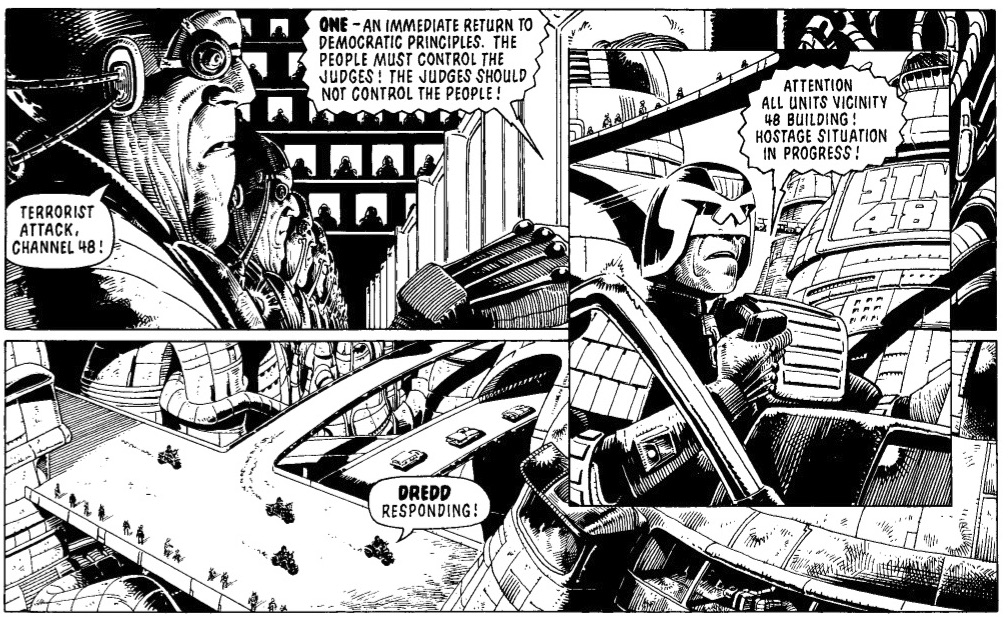 1:11:15-1:33:36: We skip through a couple of done-in-ones before reaching the story that is, arguably, the heart of the volume: “Letter From A Democrat,” which I describe as the story that breaks Judge Dredd as a strip — in a good way, I hasten to add — and which is also, potentially, a story that breaks Dredd. What happens when Wagner and Grant just wholeheartedly go in on the fact that the Judges are the bad guys? It’s a choice that has, arguably, informed so much of this volume — we touch on a few more examples — but it’s also something that resonates more today than it would have five years ago, Jeff suggests. It’s a wonderful, breathtaking story that makes what was already a great volume into something even better.

1:33:37-1:39:34: I confess that this volume exhausts me — it’s more than 400 pages long — as we talk about some other stories, including an extended Christmas episode that suggests, not for the first time, that Wagner and Grant do not properly understand how lobotomies work. Also, we talk Gribligs — not good — and Lemmings — very good — even as Jeff admits that he doesn’t like Brendan McCarthy’s art. (I know, I know; he’s ”problematic” to be very, very kind, but I still like his artwork a bunch; sorry.) 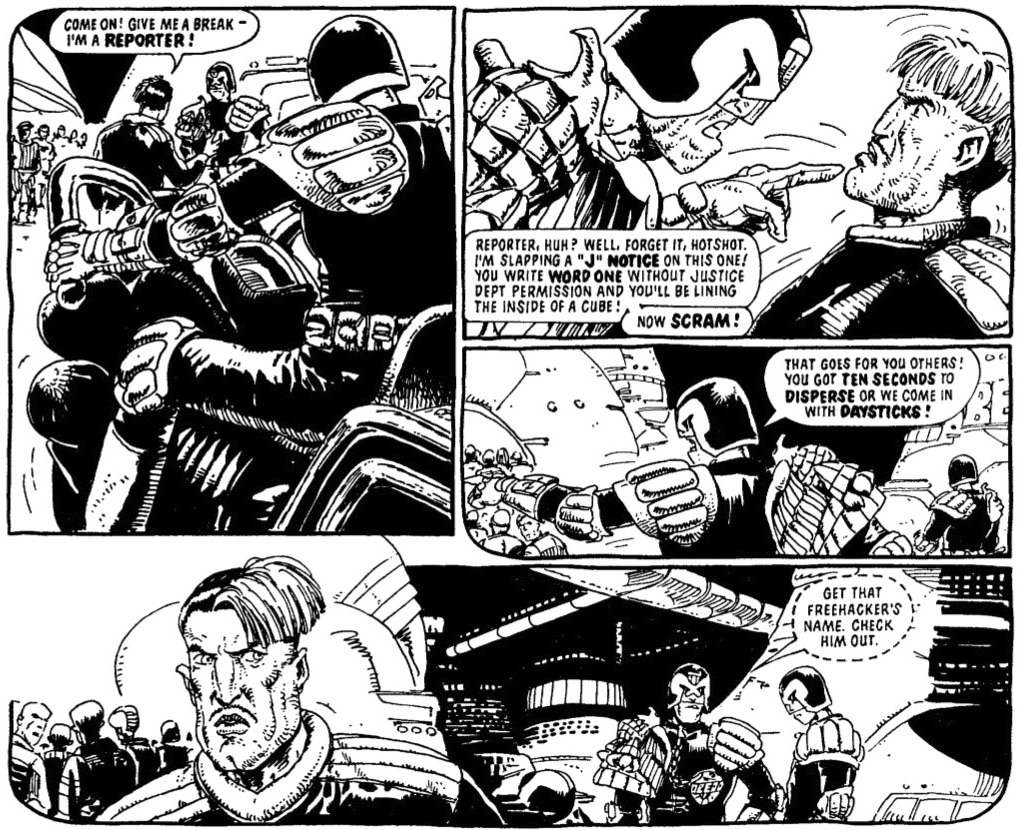 1:39:35-1:59:59: Is this a volume to recommend to newcomers? Jeff and I split on the answer, because he’d rather recommend it as a second volume, whereas I think it’s strong enough on its own merits to work as an introduction. We also list our favorite stories in the book — we both like “Midnight Surfer,” while Jeff adds “Letter From A Democrat” and “West Side Rumble,” and I go for “The Man Who Knew Too Much” (which we discuss a little) and “The Lemming Syndrome” — and I ask whether Jeff expected the volume to go quite as dark as it ended up going. Also under discussion: D notices, Ron Smith, and whether the decision to go full villain with the Judges was what revitalized Wagner and Grant. 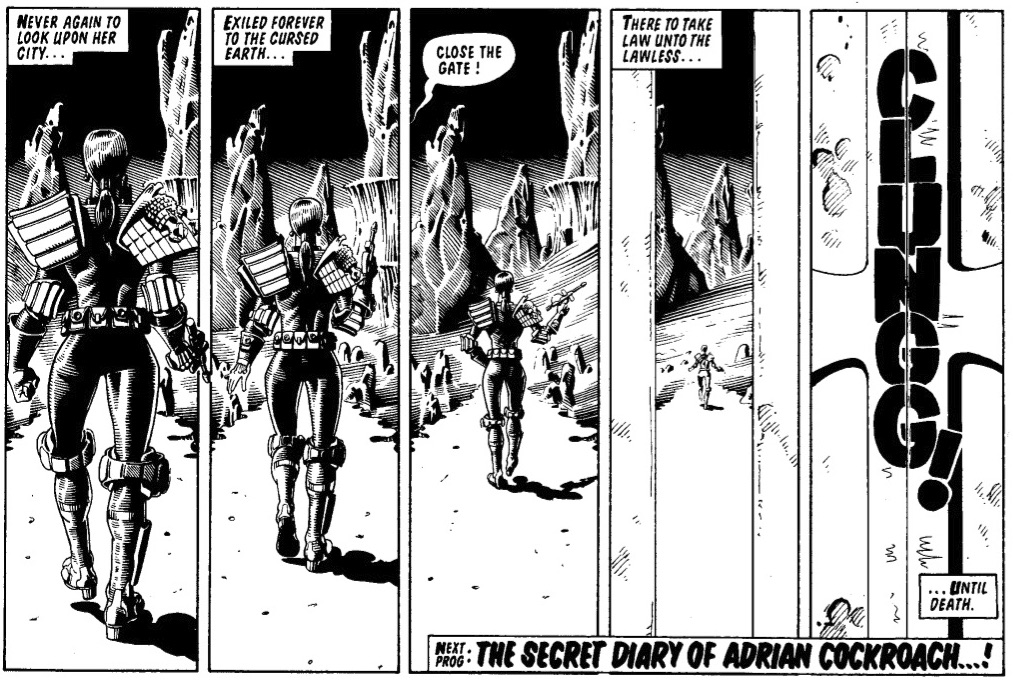 2:00:00-end: We wrap things up our usual way, mentioning the Twitter, Tumblr, Instagram and Patreon, and also let everyone (including Jeff!) know that we’re not going to be doing Case Files Vol. 10 next time; instead, we’re going to be doing Judge Dredd: The Restricted Files Vol. 1, which includes stories from special issues and annuals from 1977 through 1985. Get ready, everyone; it’s like a crash course in the evolution of Dredd.