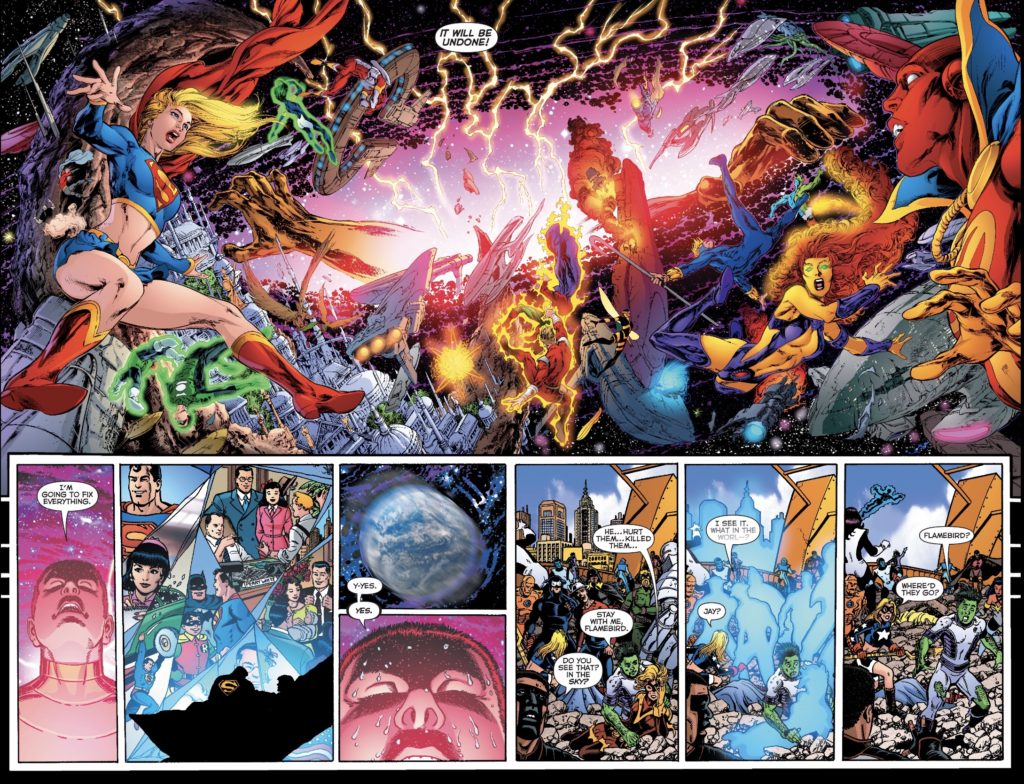 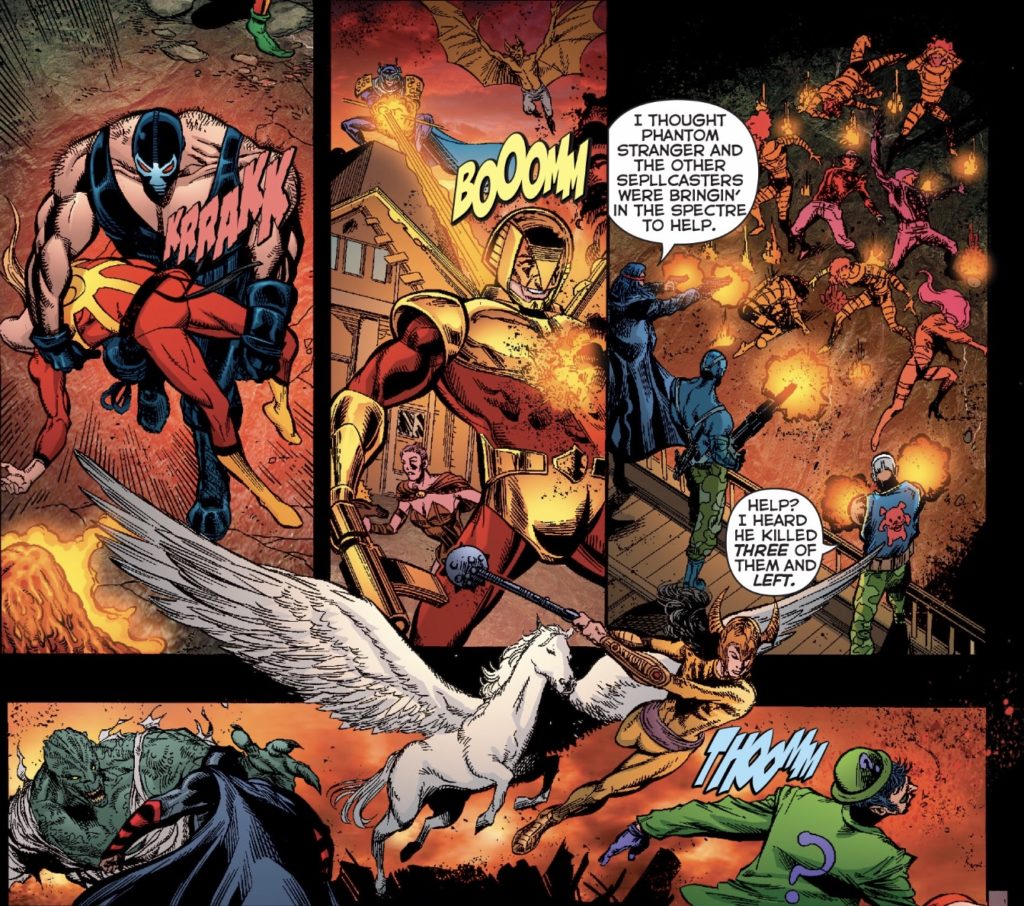 0:01-01:10:14: Greetings! Welcome to the Wait, What? rollercoaster (of love!).  There is so much going on in the world right now, and so much that has happened in the U.S. comics market in the last week, we should just hop right in and break it all down for you.  Which is to say, we *should* but thanks to a correspondence with Dominic L. Franco, Jeff sat down and power-re-read of a fourteen year old DC event miniseries: Infinite Crisis by Geoff Johns, Phil Jimenez, and a flotilla of artists, inkers, cover people, colors, and letters.  And we talk about it AT LENGTH. So if you don’t want to hear about a big turning point in the DCU and how it resonates with later work by Johns, you should probably skip ahead an…hour or so?  Discussed: The plot of Infinite Crisis and everything that leads up to it; the modified version of Infinite Crisis released as a trade (and which version is/isn’t available on DC Universe); the Marvel Universe reduction of wonder in the 80s; the New52’s alternate origin point; connections to DC’s Convergence event (complete with its “nightmarish” zero issue); the various characters arcs of Superman, Batman, and Wonder Woman; what does Geoff Johns believe in, really?  Graeme’s recent re-read of the twelve issue Ion miniseries written by Ron Marz around the time of Johns’ Sinestro War; DC event mad-libs; the good soldier who gets done the dirtiest by Infinite Crisis; and more.
01:10:14-1:35:00: Jeff tries to move on to the comics news as he’s all-too-horribly-aware how long the Infinite Crisis has become, but Graeme is not so easily swayed.  After all, Jeff opened up the whole discussion mentioning his thoughts about Infinite Crisis and a theory about the 1999 Julia Roberts/Hugh Grant movie Notting Hill. So what’s the connection, Graeme wonders?  Here’s your chance to find out discussed.  Discussed: Yesterday; Notting Hil;, the crimes-against-humanity atrocity that is Love, Actually; the other 1999 movie that is basically Notting Hill; and more. 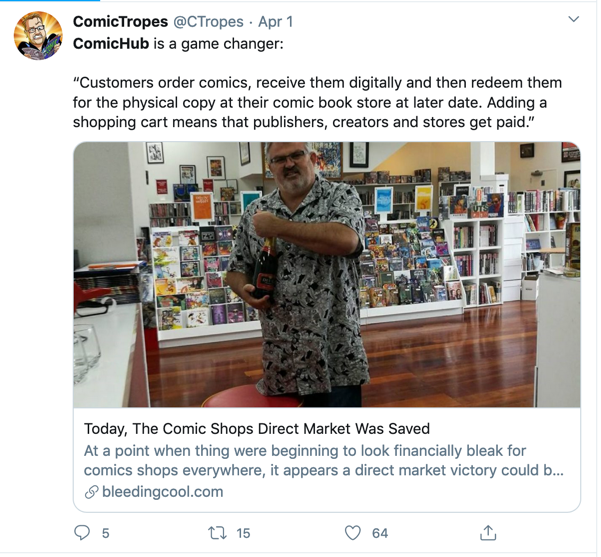 1:35:00-2:08:43: Comic news! it’s time for comic news!  Well, I mean, actually it’s probably well-past time but here it is finally!  Graeme gives us the 411 on what he rightfully described as “a fucking weird week for comics.”  Discussed (although not necessarily in this order):  DC and Marvel not publishing new material digitally (unless, as in DC’s case, it was already scheduled as digital-first material); Diamond announcing, nine days after saying it would not be delivering new product to comic stores, that it has cashflow problems and is unable to pay vendors (nine days!); ComicHub is announced as the savior of the comics industry and will immediately begin distributing digital copies of physically purchased comics (despite Jeff calling it Comics Hub this entire time); DC gave a quarter of a million dollars to retailers in financial support; and Marvel Comics pausing publication of 15-20% of its titles, affecting up to a third of its output.

These are the US unemployment claims in their historical context pic.twitter.com/NJAqPl9BVg

2:08:43-2:47:53: Unsurprisingly, we segue from the pencil’s down for a third of Marvel’s product to the slowdown and shutdown in other industries, including the ones that continue to pay us (for now).  If you wanted conversation between two friends about the pandemic, what and where it might go from here—both for themselves and for this industry—think of this as a bonus episode jammed onto your comic book podcast.  Plus, an update about where to watch The Prisoner! Plus, a recommendation from Graeme to watch: Mad Max: Fury Road.  And from Jeff: George Romero’s The Crazies.  (Yes, we are very too-on-the-nose these days.)
2:47:53-end:  Closing Comments! Look for us on  Stitcher! Itunes! Instagram! Twitter together and separately: Graeme and Jeff! Tumblr, and  on Patreon where a wonderful group of people make this all possible, including Dominic L. Franco, and Empress Audrey, Queen of the Galaxy, to whom we are especially grateful for her continuing support of this podcast.  (Also, don’t forget about Spotify!)
Next week: DROKK DROKK DROKK DROKK DROKK DROKK