Previously on Drokk!: Mega-City One as we know it — or, at least, as we’ve gotten to know it over the previous five episodes — is no more, as the result of the Apocalypse War, a storyline that both redefined the world Dredd lives in and the strip that’s named after him. But what can you do after that kind of monolithic event? 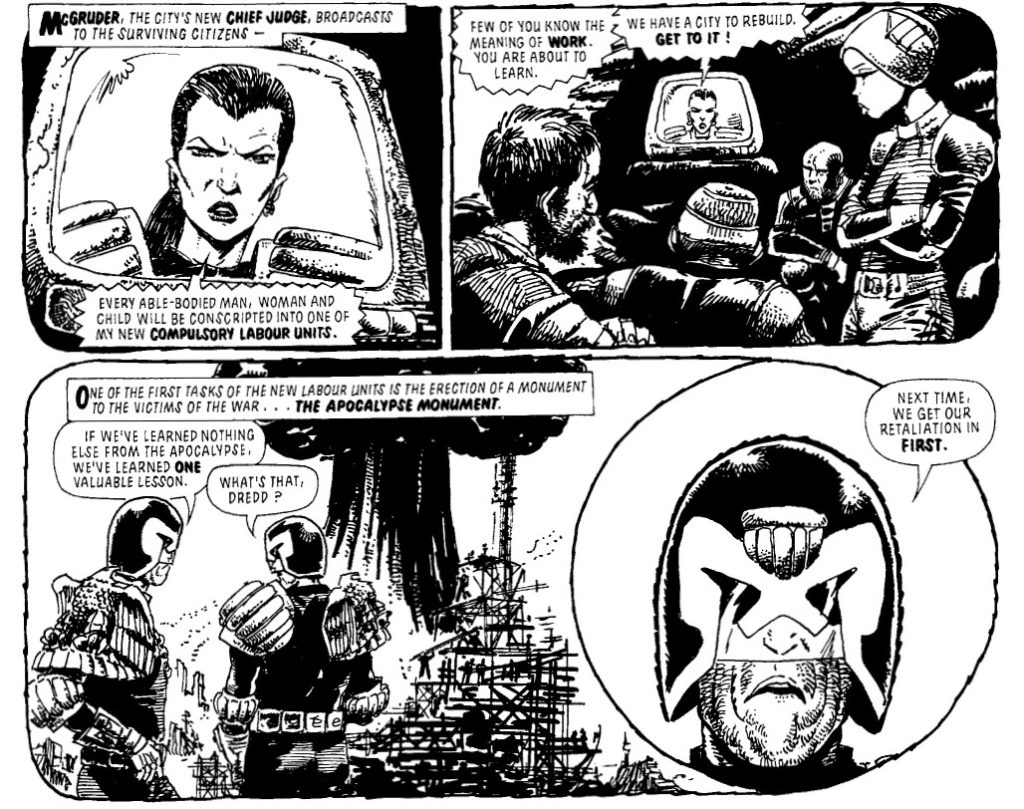 0:00:00-0:09:05: We quickly get into things, introducing that we’re talking about Judge Dredd: The Complete Case Files Vol. 6 and diving into the fact that neither of us really knew quite what to expect in the fallout of the last volume — a feeling only amplified by the fact that the first storyline features a wrestling robot called Precious Leglock.

0:09:06-0:19:11: Jeff has a theory about this volume, and it’s that John Wagner and Alan Grant are using the stories in this volume to set out their theory of the Judges and where they stand on the fascism of it all, prompted not only by this volume, but also what’s happening in the world at this moment. I also have a theory about what Wagner and Grant are doing as it relates to the Judges and judicial overreach in the wake of the Apocalypse War… but then, there’s all this weird humor getting in the way of the darkness…! 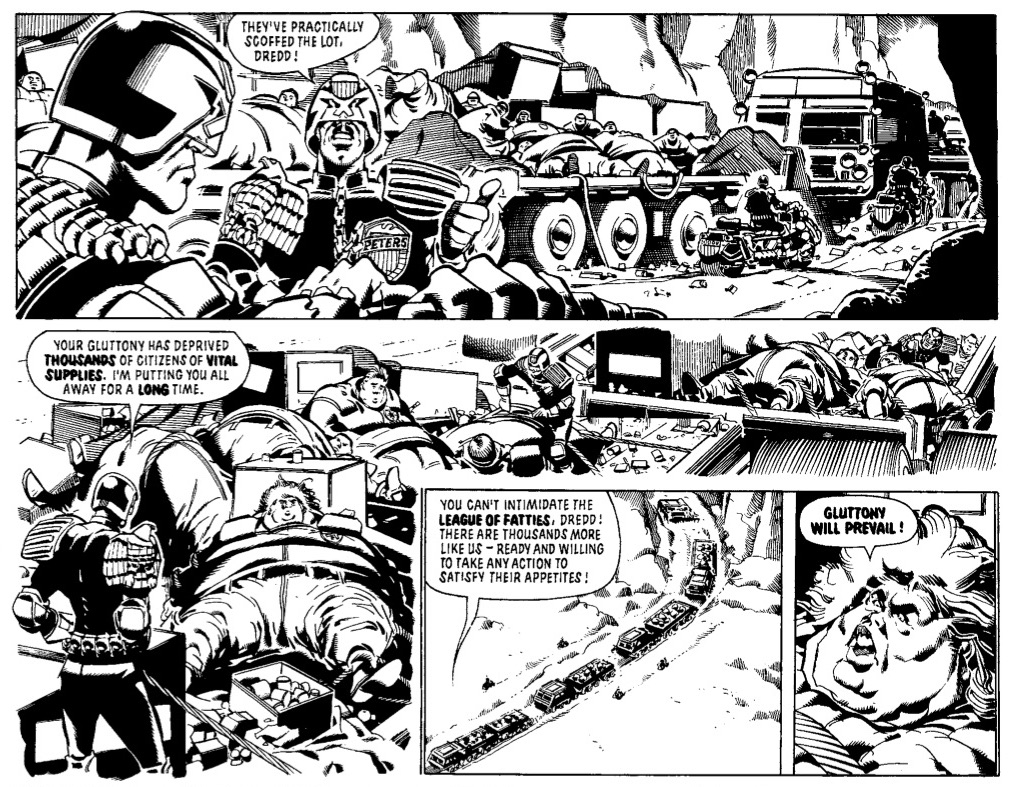 0:19:12-0:40:48: We dig into the unevenness of this book — never in terms of quality, but in terms of story and tone, certainly, with the combination of darkness and comedy being something we talk about. We also talk about cultural insensitivity in Wagner and Grant’s writing, and also the way the line of what’s acceptable culturally has shifted in the 30+ years since these stories were first published, and also the debt Paul Verhoeven’s Starship Troopers may owe Judge Dredd, in terms of the use of satirical propaganda as storytelling tool. All this, and a tiny little note about a sneaky change in the world building of the strip, as the Cursed Earth sneaks inside the walls of Mega-City One. 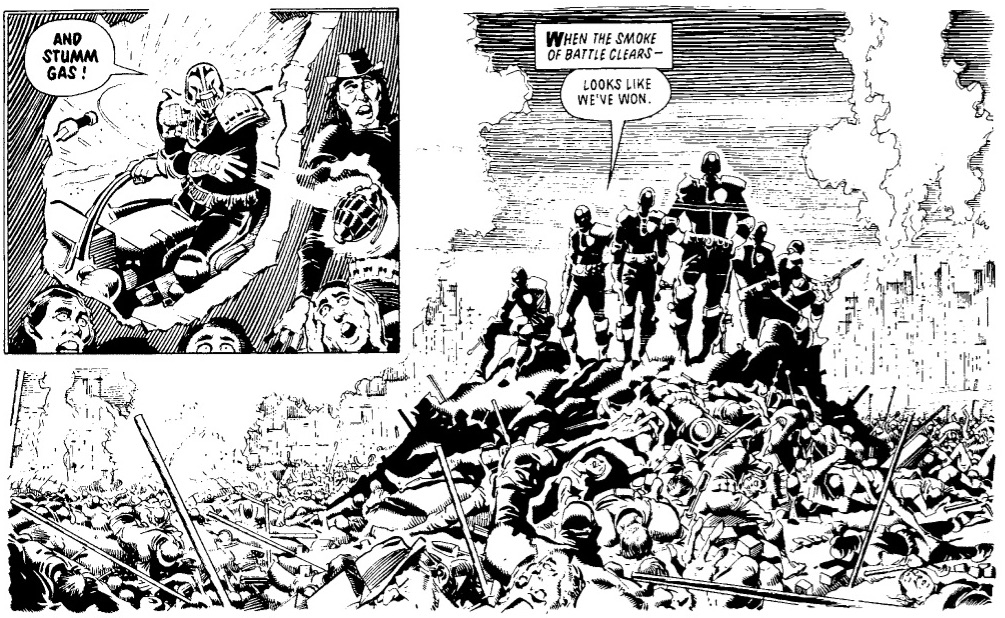 0:40:49-0:53:01: In a volume where almost everything else is in constant flux, Wagner and Grant remain the constant, writing every strip. As they push against expectations for what Judge Dredd is as a character and a strip — in the process, pretty much demolishing those expectations by showing off how versatile the latter can be — Jeff and I talk about the way in which the writers are setting out their command and control of the series. And, getting back to Jeff’s theory, is this the volume where the two decide that the ultimate purpose of Dredd is simply to entertain? 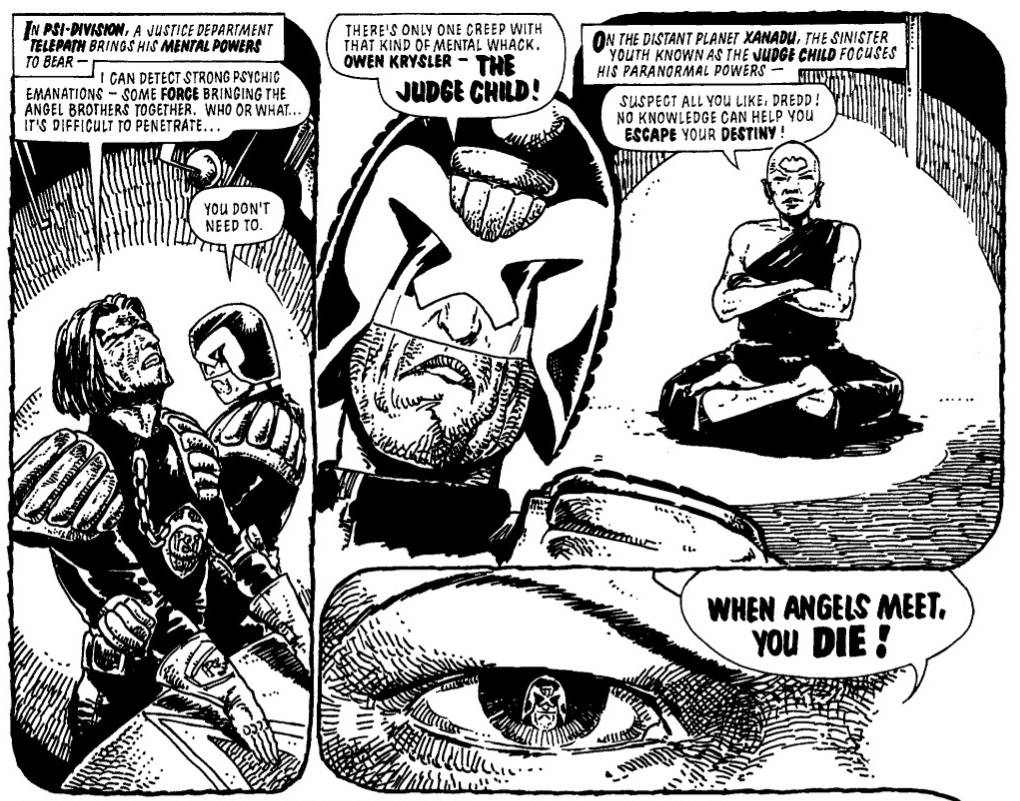 0:53:02-1:18:06: We turn, eventually, to our favorite stories from the volume, beginning with mine: “Destiny’s Angels,” in which Wagner, Grant and Carlos Ezquerra take what would in someone else’s hands be a very dramatic epic and push it in an ever-more silly direction, leading to us talking about the multi-layered approach of the writing in Dredd. There’s also an impressively over-the-top conclusion to the story, which prompts Jeff to use the phrase “This remarkable achievement in the world’s grimmest whimsy,” which feels very appropriate, considering. 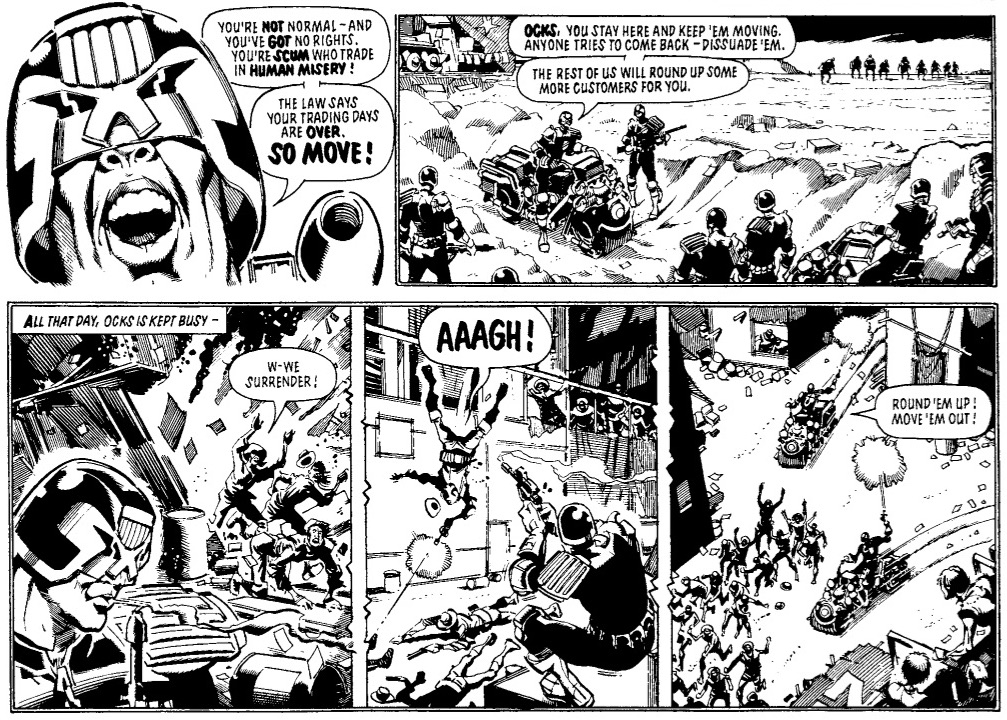 1:18:07-1:58:44: Then, to Jeff’s favorite story in the volume, “Shantytown,” which has a particular hold over him, as he explains. It brings a lot of subjects with it, not least of which the inherent fascism of the Judge system and Judge Dredd as a comic strip, and how complicit both the readers and the creators are in supporting that. Amongst the many things under discussion: Is “Shantytown” an occupation story in which we’re expected to root for the occupation force merely because it’s their name on the series’ title? Are the Judges evil? Are Wagner and Grant co-signing onto a cruel, dehumanizing system? What constitutes a happy ending, and what undercuts one? Is Dredd inherently trustworthy, despite everything? Is anyone else surprised by Jeff dropping a Mitchell & Webb reference? Okay, that one’s not actually discussed, but still. 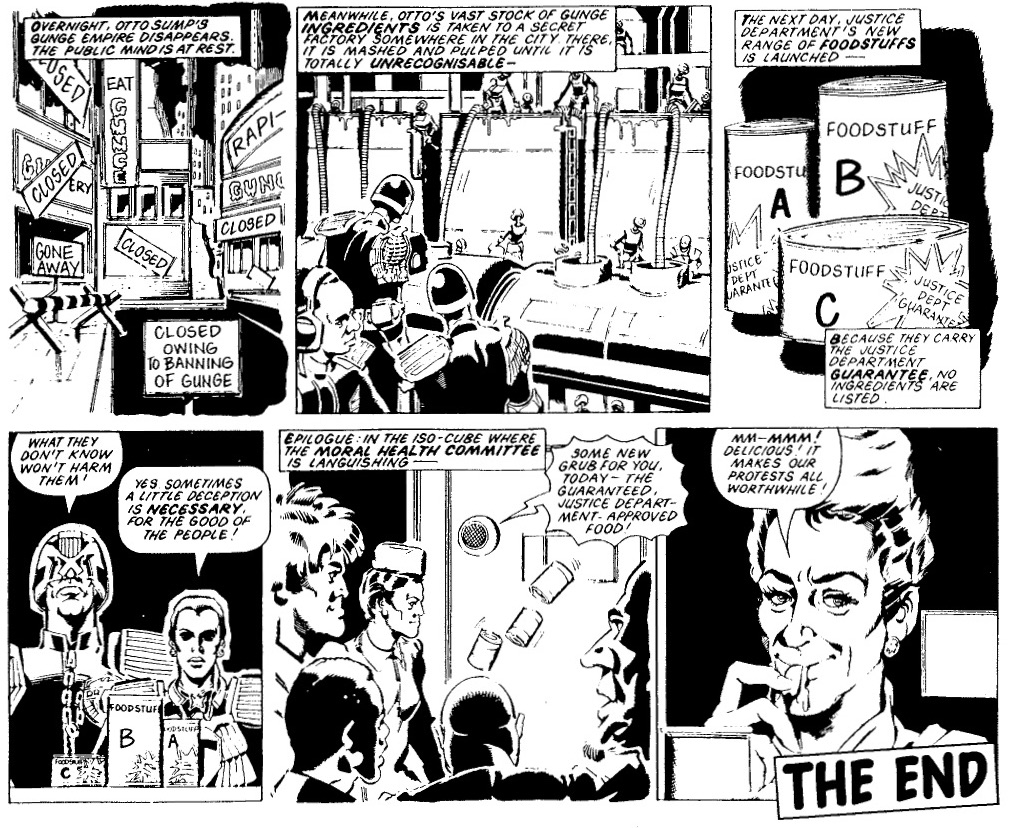 1:58:45-2:19:59: We move onto other things that are particularly grim about this volume, including the unofficial imposition of martial law and constant growth of the Judges’ power in this volume. Does this represent the most honest depiction of political power in comics, and if so, is that accidental, considering that 2000 AD was still very much a kids’ comic at the time these episodes were printed? Also, we talk about Jeff’s fear that Wagner and Grant may have fascist tendencies based on comics’ history of important creators drifting in that direction, and once again touch on the idea that the tension in Wagner’s writing in particular when it comes to the idea that the Judges serve a purpose in their community is an important one to Judge Dredd as an overall strip.

2:20:00-end: We wrap things up with mention of the fact that, for those showing up at San Diego Comic-Con this week, I’m going to be on the Judge Dredd: Satire or Super-Cop panel on Thursday afternoon, before going into the usual mention of Tumblr, Instagram and Twitter, not to mention our Patreon. Next month, we’ll be back with Vol. 7, in which there are werewolves, competitive eating contests and, most importantly, the arrival on the strip of Cam Kennedy. As always, thanks for listening. 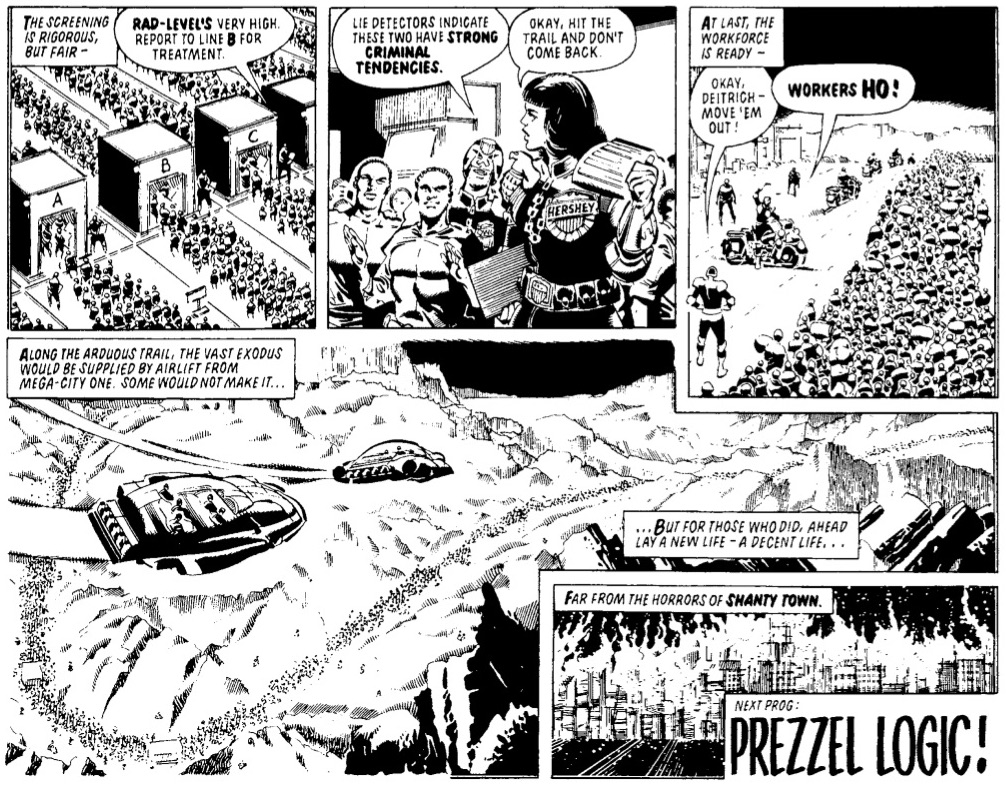