Previously on Drokk!: Two years’ worth of Judge Dredd strips have passed, but things are only now starting to congeal when it comes to working out just who the title character is for both creators and readers, it seems, with John Wagner taking over the strip essentially full-time as writer with the length (and wonderful) “The Day The Law Died” cycle of stories. With Wagner installed permanently as the man in charge of Mega-City One, what lies ahead? 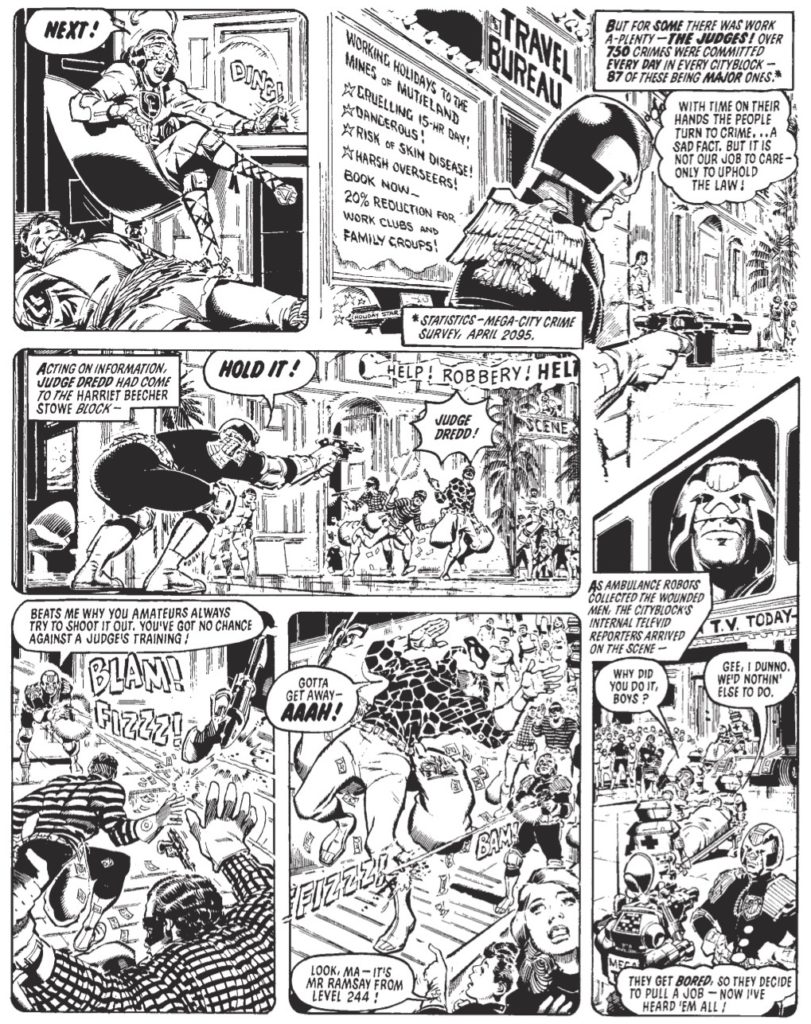 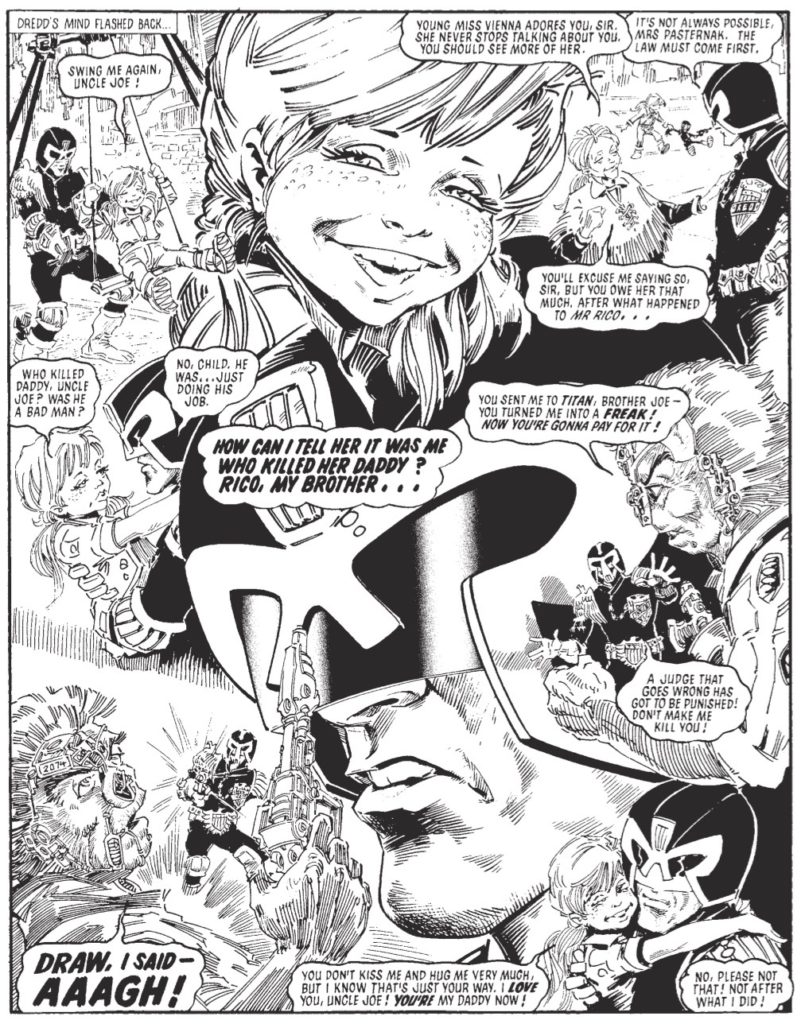 0:01:55-0:17:46: Although Vol. 3 is a collection of short stories — the longest continued narrative is just five episodes — there’s a throughline to be found, and we talk about what we both think is the most obvious candidate: That this is the volume where Mega-City One is solidified as a location, and what that means. (Spoilers: Jeff makes the apt point that the best on-screen depiction of Mega-City One is arguably Springfield in the monorail episode of The Simpsons.) Also, mention of the “Vienna” episode of the strip, which starts the book off, gets us talking about Dredd as an emotional being, and what that means to the strip as a whole, with references to romance comics and Gil Kane in the offing. Does John Wagner have a better idea of what Mega-City One is than he does of who and what Dredd is by this point? 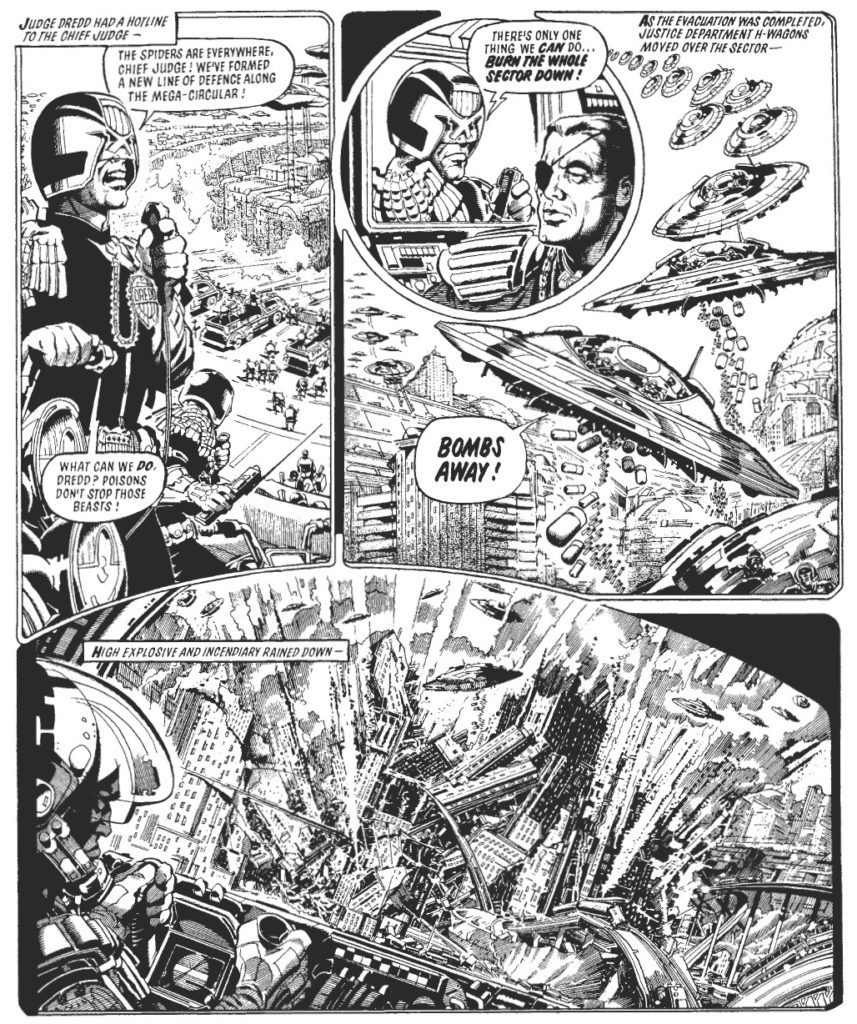 0:17:47-0:26:31: A brief discussion of what it must have been like to be reading these stories when they appeared — not only for the variety and quality of Wagner’s writing, but also weekly art from the likes of Ron Smith, Brian Bolland and Mike McMahon — brings us back to the idea of Dredd as the natural successor to Will Eisner’s The Spirit, and the ways in which the two strips are similar. (And the ways in which they’re dissimilar, as well.)

0:26:32-0:30:31: Mention of Jeff’s love of Ron Smith leads us to a very short digression about the visual evolution of the Dredd strip through the three years to date, and from the Ezquerra/McMahon aesthetic to the more refined Bolland/Ron Smith look, and what that means as a whole. 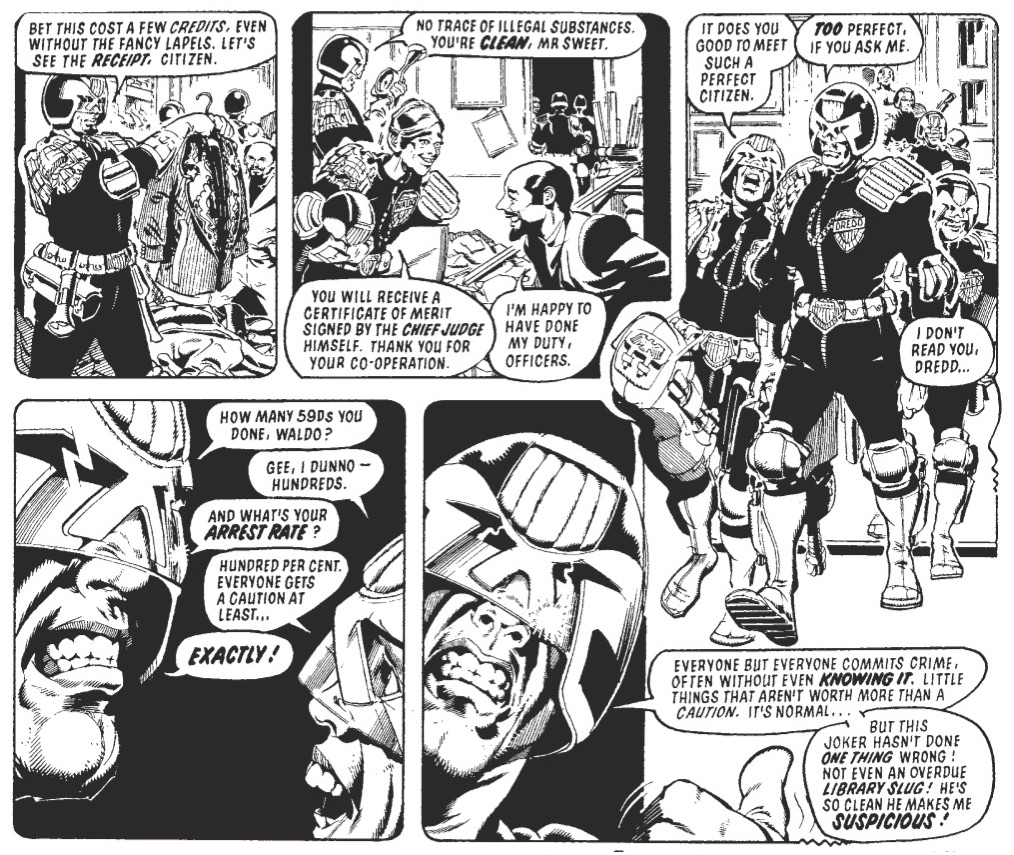 0:30:32-0:38:17: And then we’re back to talking about the writing — namely, the status quo of Mega-City One, and how the Judges interact with the citizens. We talk about two foundational lines of dialogue that set the stage for everything that happens afterwards, and quite how stacked the odds are against any MC-1 citizen for not having a bad experience with the Judges at some point in their lives. The future, it seems, isn’t just unkind to regular people: It wants to try and break them.

0:38:18-0:53:19: This leads on to a theory I have about this volume offering an unexpected reason for Dredd to be the series’ protagonist — that he’s an aberration as a Judge because he repeatedly is shown to embrace characteristics that are seen as being reason enough to make Judges retire, but is nonetheless successful as a Judge despite (or because of) that. In discussing this, we end up talking about a story in which Dredd deals with animal experimentation, in what Jeff describes as the perfect blend of “radical politics and silver age DC storytelling tropes.” Oh, and John Cooper’s cat drawings, which are uncannily good. 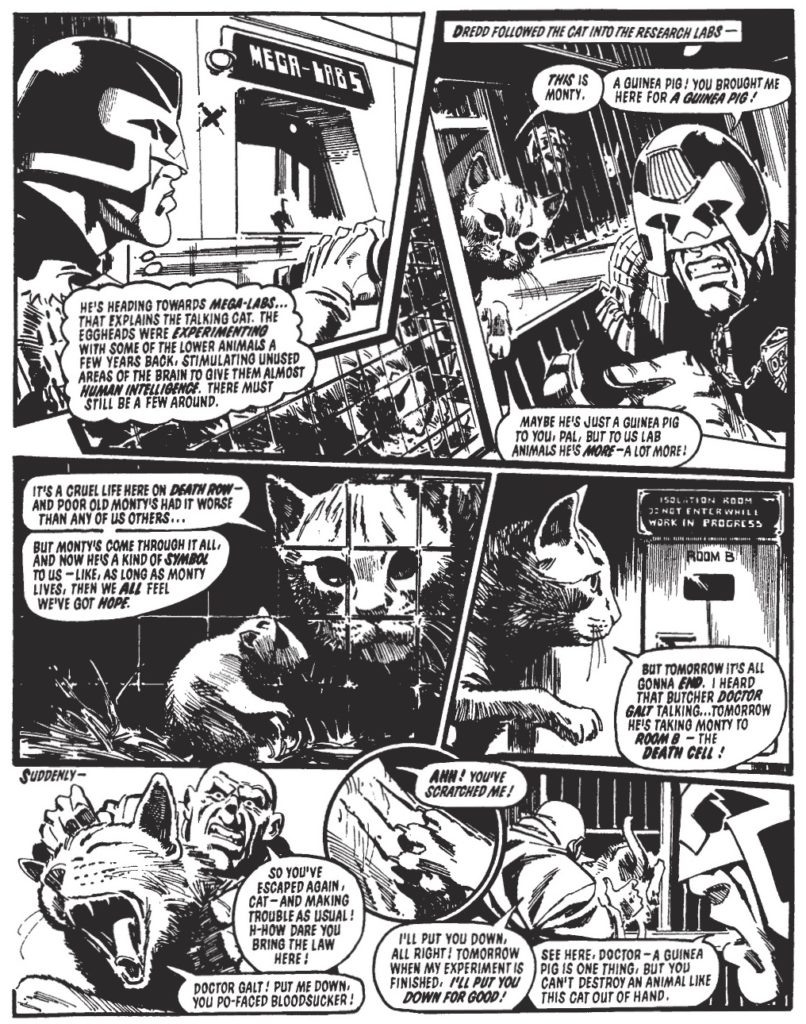 0:53:20-1:06:34: With Jeff having talked about the animal experimentation story being one of his favorites in this volume, we run down the other contenders, which includes an early example of GoFundMe, the first appearance of Judge Death and more — which turns into a discussion about the sense of both continuity and consistency of location that Wagner manages to create around Mega-City One and Judge Dredd the strip in this volume, as well as the tonal variety consistently employed by the series at this point. 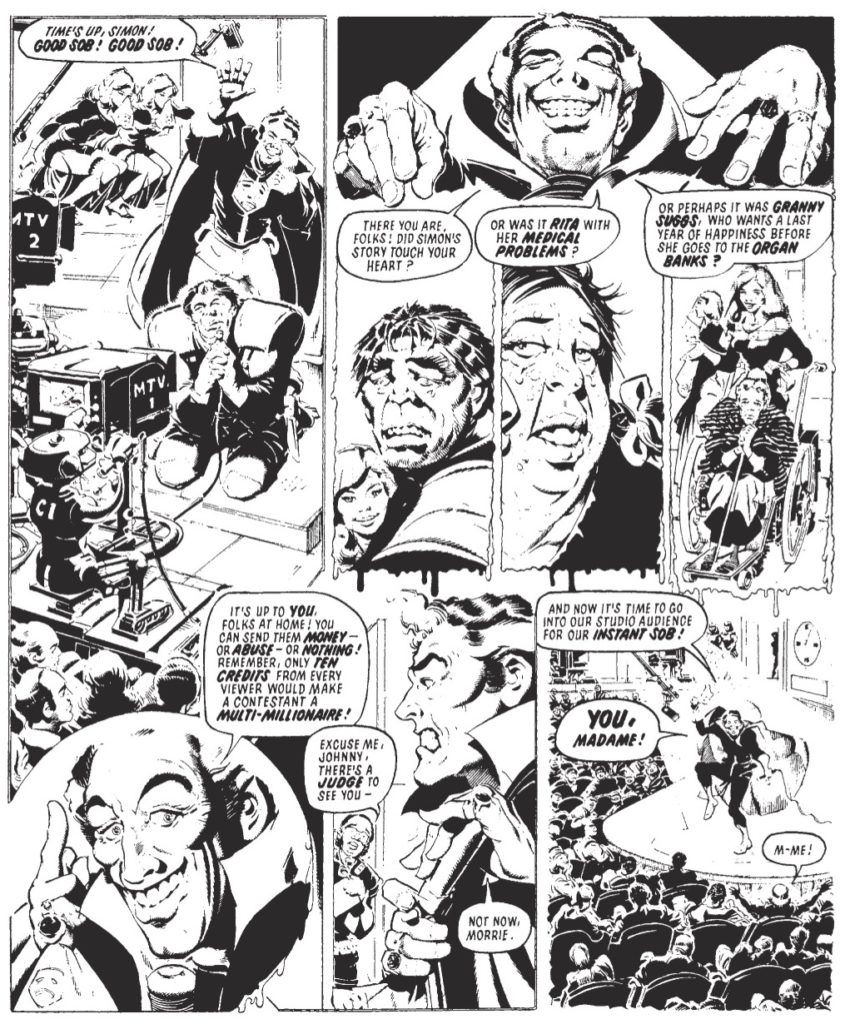 1:06:35-1:17:08: We move onto some of my favorite stories, and also return to the idea that the citizens of Mega-City One are doomed to failure simply by living in the time and place that they do, with Jeff dropping a reference to a 1976 novel about man’s inhumanity to… well, everything, really, called Dr. Rat by William Kotzwinkle. Was this a reference on Wagner? Who can tell, but it doubtlessly was less grim as the Umpty Candy story, which both Jeff and I found ourselves fascinated by, not least of all because of how Mr. Ump was dressed, and the moral of the story… 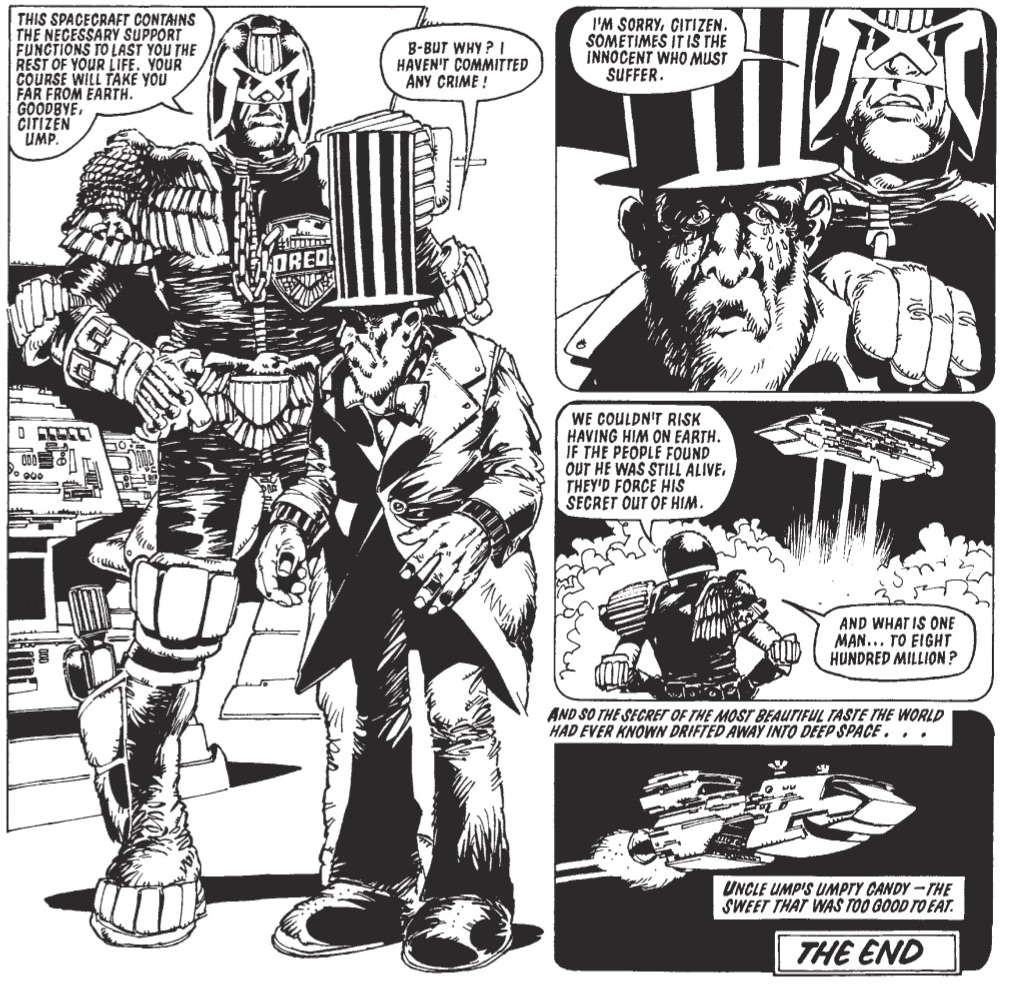 1:17:09-1:29:14: From the sublime to the shit, as we talk about Pat Mills’ sole contribution to the volume, the less-than-good “Blood of Satanus” three-parter; this leads into some chat about the fact that we both felt like Mills was more present in the book than he actually was, and what the legacy of Pat Mills on Dredd actually might be. Come for that, stay for the mention of Henry Ford the Horse, of course, of course.

1:29:15-1:38:37: This volume turned out to be John Wagner’s moment to shine as a solo writer — which will happen again, of course, throughout Dredd history — and I wonder as to his method in writing such a long game-type of a comic strip. We talk about the unique position Wagner is in with Dredd, and also how it allows for a strange sense of realism unavailable in almost every other comic property. 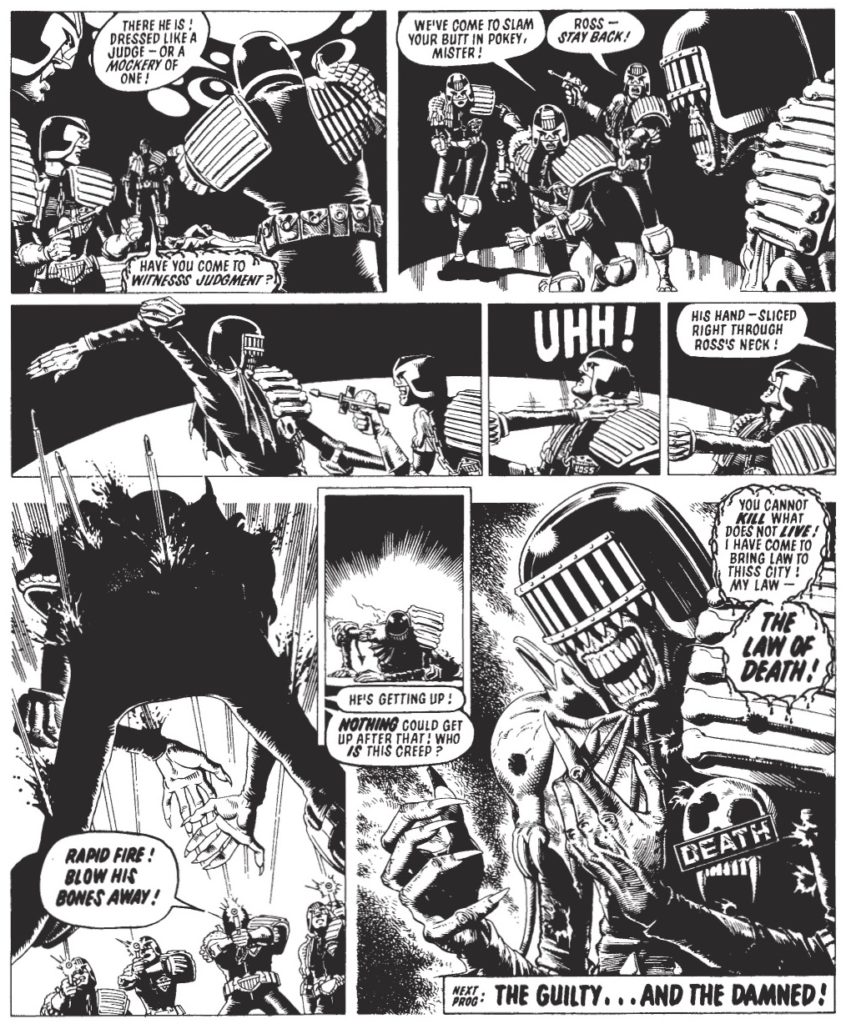 1:38:38-end: Coming in hot as we try to wrap things up, Jeff and I both talk about whether or not we’d recommend this volume to newcomers, tease what’s happening in the next episode of Drokk! and do the traditional mention of our Tumblr, Twitter and Instagram accounts, not to mention the Patron that’s responsible for this whole thing. It’s a lot, I know, but Grud thanks you for reading and listening as ever.