Welcome to the year 2099, where the law is everything, and one man is the law — even if, in the stories we’re reading in this first episode of Drokk!, Judge Dredd isn’t exactly the fearsome lawman that everyone will come to know and love just yet. But watching how that happens is half the fun, or at least, half the fun of this podcast. 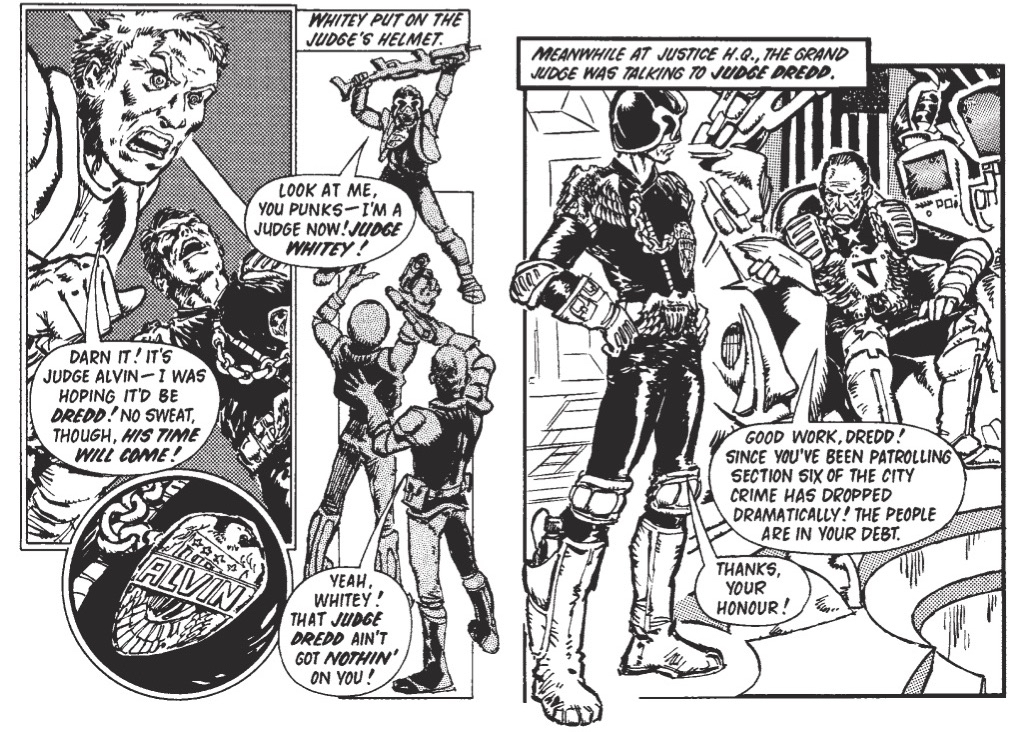 0:02:10-:0:04:59: Jeff quickly unpacks his history with Judge Dredd as a character and a strip, including mention of the Eagle Comics reprints that debuted in the U.S. in the early ‘80s. A quick correction to what I said in the show itself: The Eagle Comics reprints launched in 1983 as an offshoot of Titan Books, insofar as they were owned by the same man, Nick Landau. (There are probably many U.S. fans who’ll be familiar with the later Quality Comics reprints, which were like the Eagle reprints if done by someone who had access to a photocopier that destroyed page ratios and were colored by someone in a rush; the Eagle reprints were generally higher quality, and had original covers from Brian Bolland and other 2000 AD artists.)

0:05:00-:0:15:03: We talk about the way in which the early years of Judge Dredd are different from the character and strip we know today, which is another way of saying, “Man, these early strips are often pretty goofy.” They’re also just burning through ideas, as if no-one behind the scenes really expecting Dredd to stick around that long and saw no reason to pace themselves. 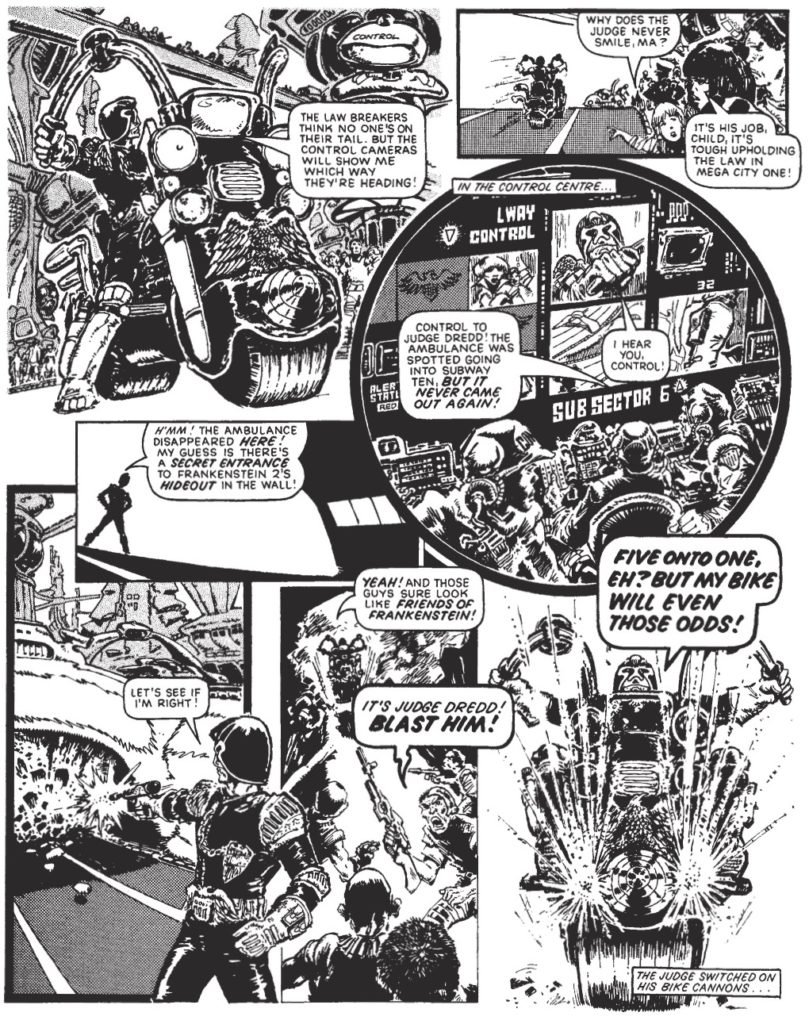 0:15:04-0:23:01: “So much of this first volume feels born of desperation,” I say about the first year of the character, in which various writers and artists try and fill the void of Dredd after the immediate departure of his creators for reasons Jeff alludes to. (He’s referencing material from both Pat Mills’ Be Pure! Be Vigilant! Behave!: 2000 AD & Judge Dredd: The Secret History and also the wonderful Thrill-Power Overload: 2000 AD — The First Forty Years at times throughout this episode, starting here.)

0:23:02-0:31:36: We begin to get into the weeds, talking about potential influences in the earliest days of the series, whether that happens to be Silver Age DC Comics or the density of storytelling in earlier British comics that preceded 2000 AD altogether, while also touching on the difference in comics language between UK and US comics a little. (This, I suspect, will be something we’ll come back to a lot across this series as a whole.)

0:31:37-0:40:14: After a rough start, things start to fall into focus a bit more with the arrival of co-creator John Wagner on the strip, nine episodes in. (Yes, that seems to make little sense; we explain it, honest.) If nothing else, he’s the first writer who seems to be okay not only not trying to make Dredd heroic, but just the opposite: Understanding that Dredd works really well as a character without any great depth, or any noticeable sympathetic features. Oh, and also as kind of a bastard, too. 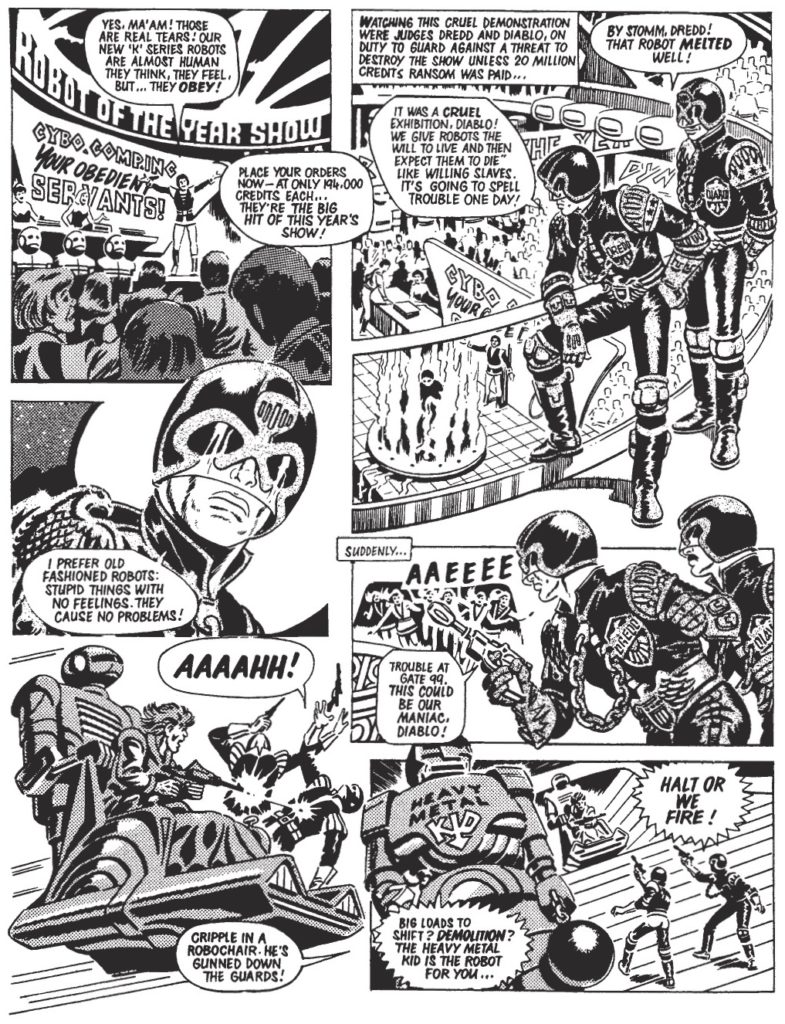 0:40:15-0:50:19: Mention of Walter the Wobot gets us onto the topic of sidekicks and their place in comic book tradition, as both Walter and, to a lesser extent, housekeeper Maria, are placed in a spectrum of characters that includes both Woozy Winks and Dennis the Menace’s Walter the Softy. (That’s the British Dennis, I should make clear.) Also! What is with John Wagner and racist stereotypes when it comes to sidekicks, and does Dredd being so unsympathetic make the racism somehow more palatable?

0:50:19-0:57:44: “The Return of Rico” marks Pat Mills’ greatest contribution to the series to date, and it’s a story packed with all kinds of great stuff that also happens to be ruined by a particularly terrible punchline. How did the Hollies get in here? Also! Jeff’s love of sentimental pop — revealed! 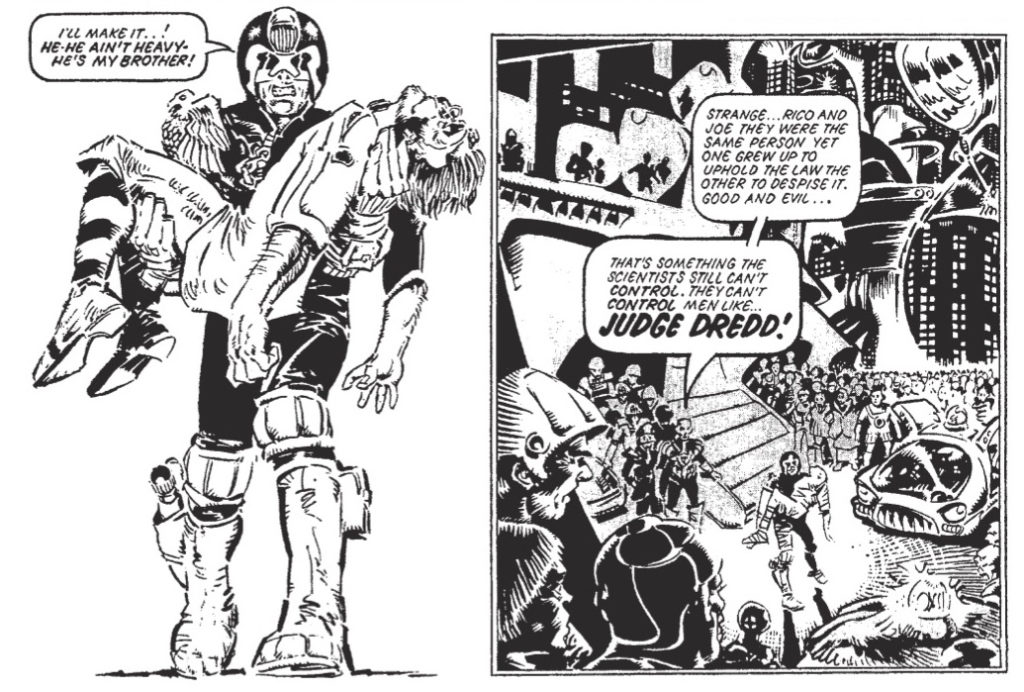 0:57:45-1:14:10: Rico’s debut isn’t the only bit of world building that stuck around from the second six months of the character’s existence, and we talk about the fact that John Wagner (and, to a lesser extent, others) seem to find their footing after a shaky start. This leads into a very brief diversion about Wagner working through different comic book crime influences as he tries to work out what kind of comic Judge Dredd is, especially — as far as I’m concerned — Will Eisner’s The Spirit.

1:14:11-1:21:16: “We haven’t talked enough about the art,” I say, and considering this book features Mike McMahon, Brian Bolland, Ian Gibson and many more, that’s a particular oversight we try to address here. Of note: Jeff loves Ron Turner’s work but isn’t a fan of early Gibson, which we both agree is a little bit too busy. (Maybe we should do a spin-off Robo Hunter podcast to deal with more Gibson throughout the years…) 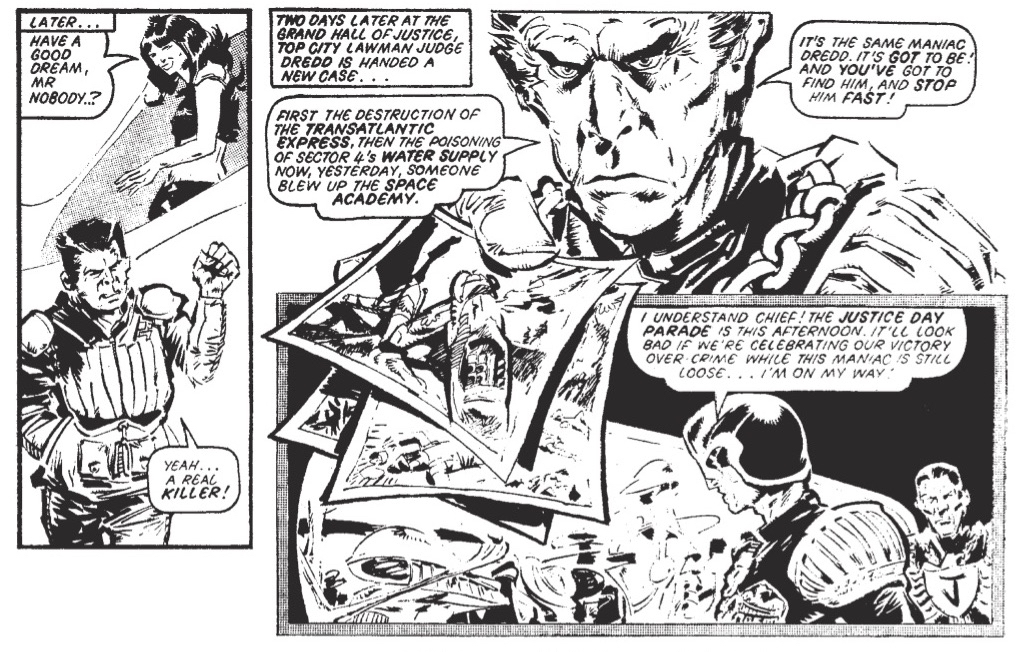 1:21:17-1:30:51: We talk about our favorite stories from the collection; I talk about the Dream Palace done in one, which Jeff likens to The Spiritstory about Gerhard Shnobble, while he can’t resist tales about Billy Jones, criminal apes — with me forgetting the name of Harry Heston in response, to my shame — and, of course, robots that want to rise up and free themselves of the shackles placed upon them by their makers. (Updated to add: Harry Heston was created by Stewart Perkins and Jake Lynch, as Henry Flint corrected me on Twitter.)

1:30:52-1:38:06: Another brief diversion, as we talk about whether or not the “Robot Wars” storyline scared creators off longer storylines for awhile afterwards, and whether “Luna-1,” the status quo change that ends this volume, is an attempt to pretend to have a continued storyline without actually going through with it. Also under discussion: The workload involved in making a weekly comic without break, and Jeff and I discovering a connection between 2000 AD and American Golden Age comics that we didn’t know we knew about.

1:38:07-1:52:14: Sure, it’s the first volume of the series and it’s the first Dredd stories, but is Complete Case Files Vol. 1 a good place for newcomers to start? Jeff says maybe, depending on what they’re looking for — dropping a Bob Haney reference in the process — while I’m unconvinced, instead likening it to the earliest issues of Fantastic Four. High praise, or merely a sign that the best is yet to come? Why not go with “both”? 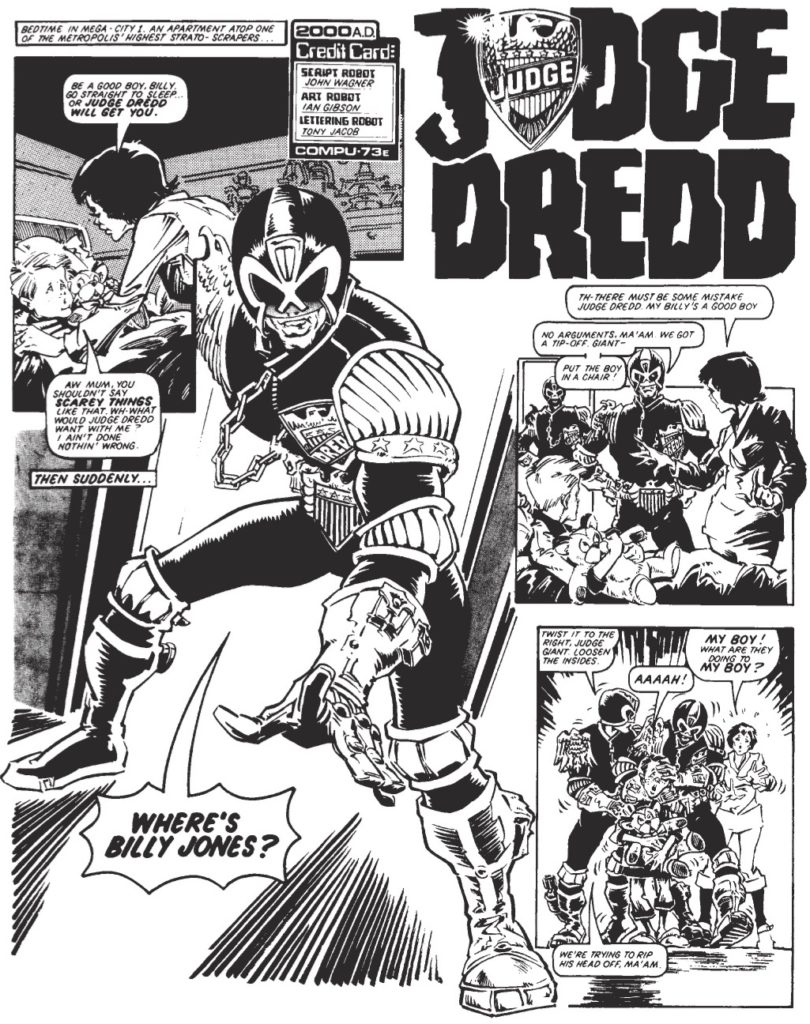 1:52:15-end: We wrap things up with a truncated farewell (There was more cut for crackly audio purposes), but what you’re missing is that Drokk! will be back next month with the second volume, which brings both “The Cursed Earth” and “The Day The Law Died,” and really kicks the series into high gear. In the meantime, there’s a Tumblr, Twitter, Instagram and Patreon. Grud!