Previously on Drokk!: The Apocalypse War ended two volumes ago, but it perhaps should come as a surprise that the aftermath of nuclear conflict takes awhile to work itself through. The real surprise may be that writers Alan Grant and John Wagner make it seem so entertaining… 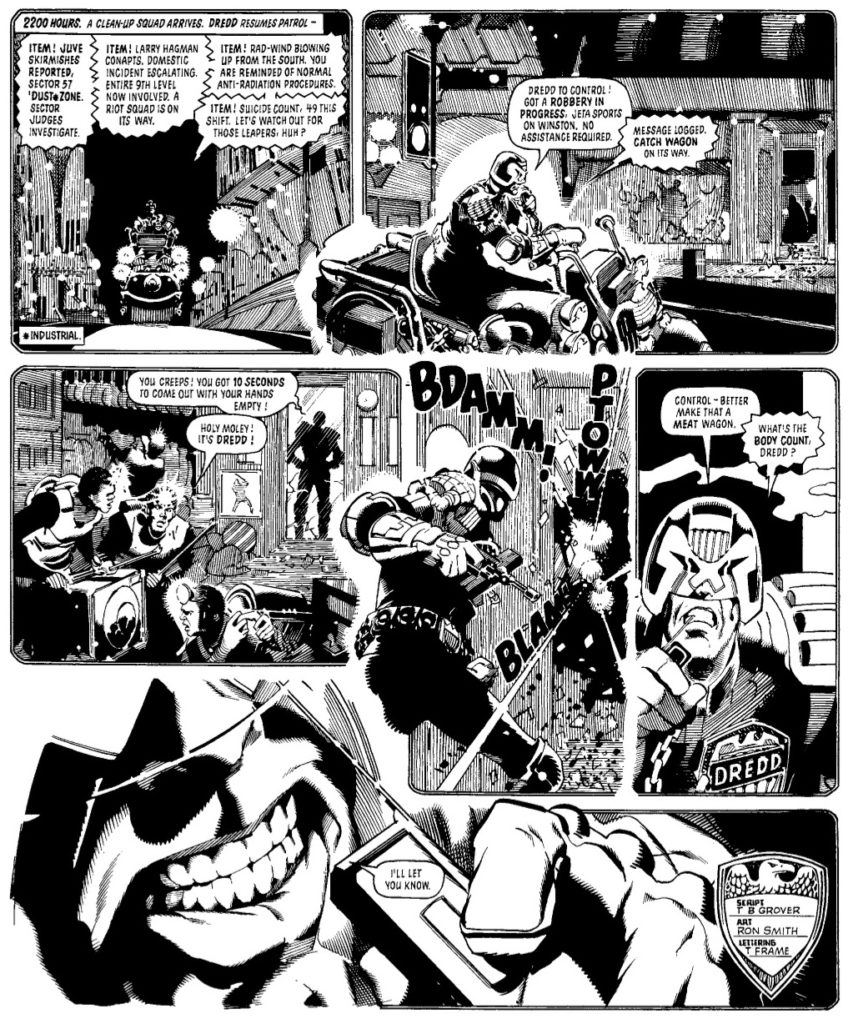 0:01:32-0:11:31: Jeff and I disagree on what the defining feature of this collection is; for Jeff, it’s comedy, for me, I’m struck by the existential horror that life in Mega-City One has become by this point, calling these stories “bleak in ways the series has never been.” Perhaps that’s why Jeff thinks that this is the closest the series has gotten yet to the platonic ideal of Dredd as a strip in his head — or maybe it’s the level of craft on display in these stories, as Wagner and Grant continue to push at the edges of what Judge Dredd as a comic can be. 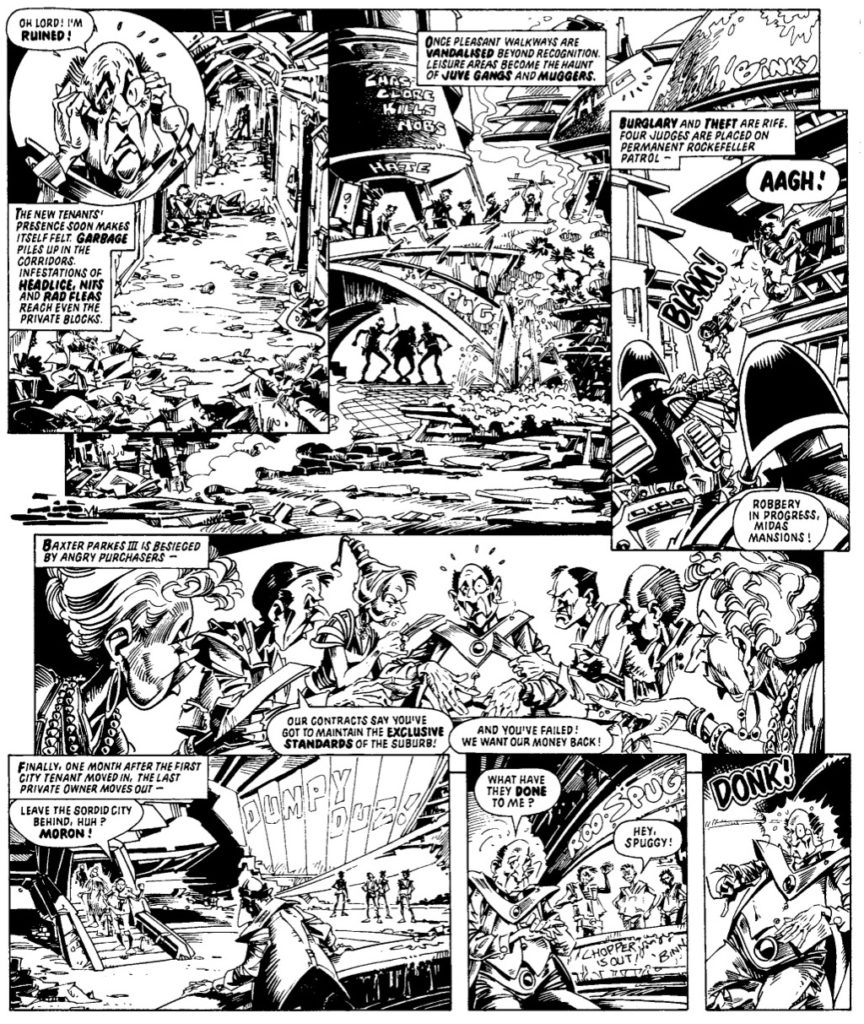 0:11:32-0:24:35: We talk about the fact that, in this volume, Mega-City One feels more out of control than ever, and also about the grim humor — and perhaps misanthropy — that propels so much of the writing in this collection, whether directly, as in the “High Society” one-off story, or obliquely, as in a story in which the public votes an orangutan into office. This is a volume in which Wagner and Grant seem to be becoming more interested in Mega-City One citizens than they are the titular hero, but it doesn’t necessarily mean that they like them. 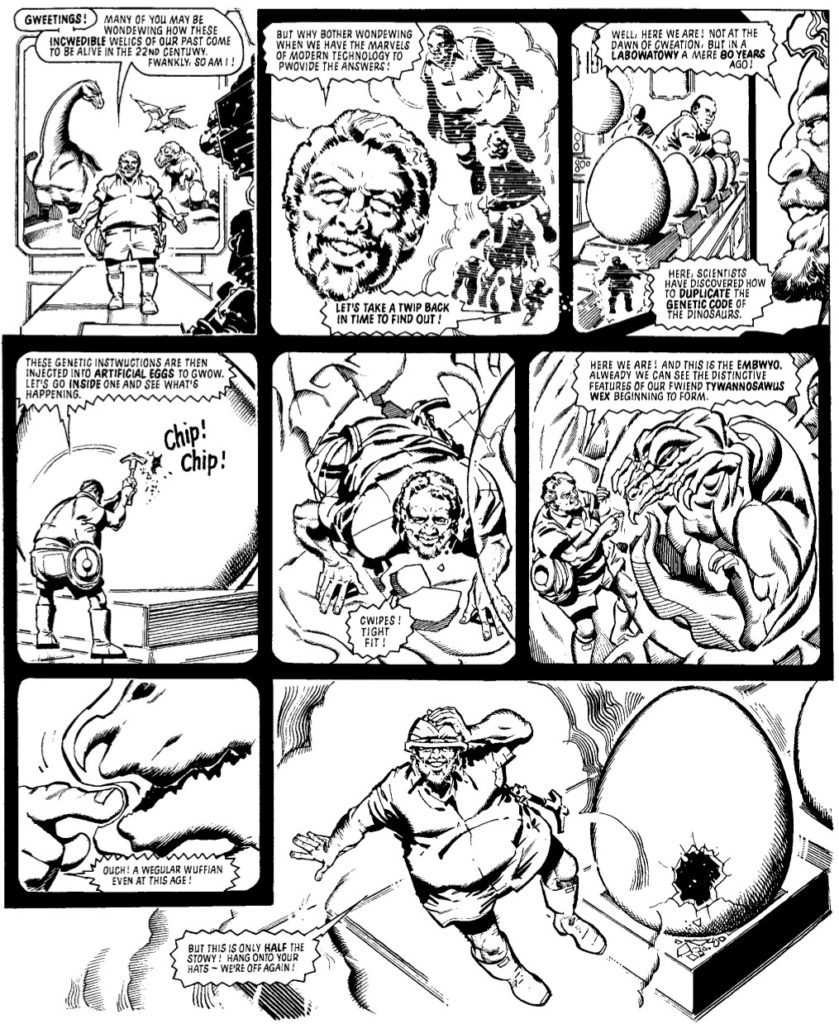 0:24:36-0:32:47: All of that leads us into a discussion on world building, and how seemingly effortless it’s become by this point — even when such world building seems to overwrite what other creators (Pat Mills, ahem) have done earlier in the strip. Or is it just reinforcing what has come before? 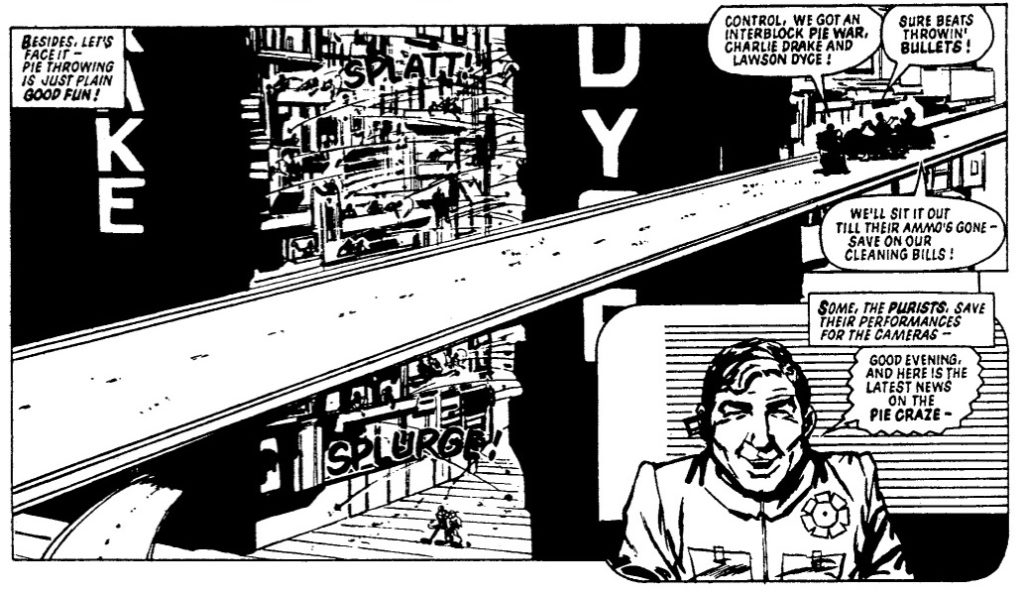 0:32:48-0:49:16: By this point in the run, Judge Dredd as a strip — and Wagner and Grant as a writing team — have perfected the idea of writing for multiple audiences at once, which means that Jeff and I talk about the multiple layers to be found in these stories, whether it’s literary shout-outs or an unexpected number of superhero references that are found in this volume in particular. Are there implicit digs at Alan Moore to be found? Are Wagner and Grant just entertaining themselves as they work their hearts out? And what does this do to tonal whiplash, versus tonal consistency? All is under discussion! 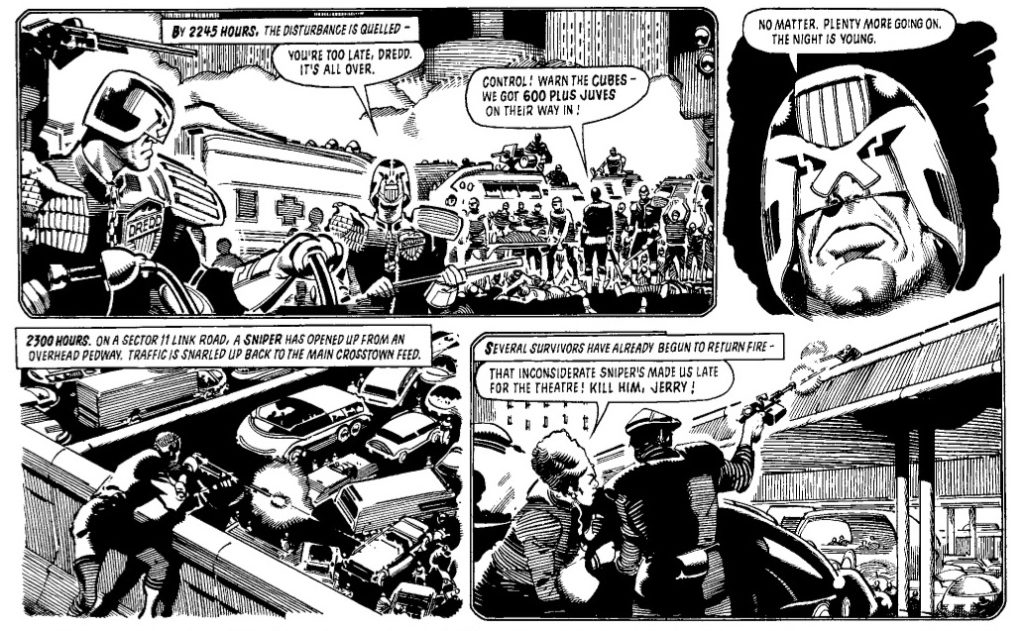 0:49:17-1:05:47: Just how prescient is the strip at this point? I say that it’s feeling far more in tune with the world today than I expected, or necessarily am comfortable with — shades of how Jeff was feeling last episode — and we end up talking about what Jeff calls the “uncanny valley” of topicality in the strip, and how much of it is actually predicting the future, versus just paying attention to humanity and history.

1:05:48-1:28:03: We talk about “The Graveyard Shift,” the seven-episode storyline that seems to be the heart of this volume, and just how overwhelming it is, as well as what it does in terms of world building but also character building for Dredd and for Mega-City One as the most obvious supporting character in the strip. Plus: How funny is this volume?

1:28:04-1:38:46: From “The Graveyard Shift,” we go to another handful of storylines in the book, whether it’s “Citizen Snork,” “The Haunting of Sector House 9” or the untitled training of Rookie Judge Decker that closes the book out, and delivers a great character both of us hope we see again. But: is the fact that Judge Dredd as a strip seems like it can actually do any kind of story what gives the strip its power by his point? Jeff suggests that’s the case, and as usual, he’s probably right. 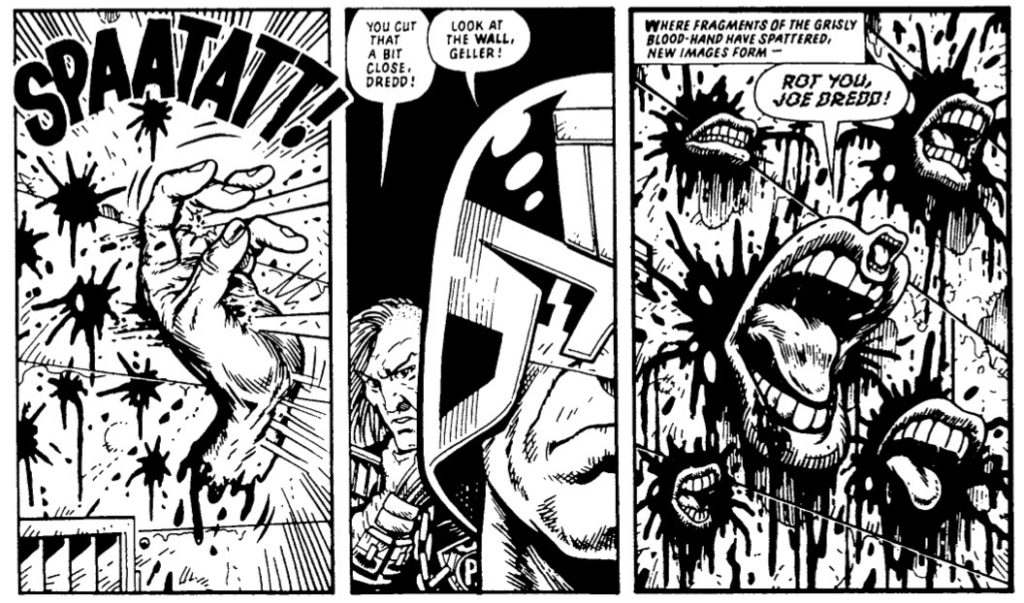 1:38:47-1:47:03: This is, once again, just a great looking book, and we talk about that: The presence of Steve Dillon, Brett Ewins and Cam Kennedy can’t be overlooked, and the variety of visual styles on display is something that Jeff feels particularly strongly about. So much so, in fact, that he won’t let me complain too much about Ian Gibson. (It’s such a good looking book that Ian Gibson is the weak point. Just think about that!)

1:47:04-end: Attempting to close things out, I have a couple of final questions: Are the Judges seeming different in the book — because they seem kinder to me at a couple of important moments — and what are our favorite stories? For Jeff, it’s “Haunting of Sector House 9,” and for me, “The Graveyard Shift.” We briefly talk about the fact that Wagner and Grant’s shockingly heavy workload at the point these comics were being produced might have made them even better writers, and then we wrap up by mentioning the usual Twitter, Tumblr, Instagram and Patreon links to visit. Next month: Vol. 8, and an abandoned mega-epic awaits! As usual, thank you for listening and reading. 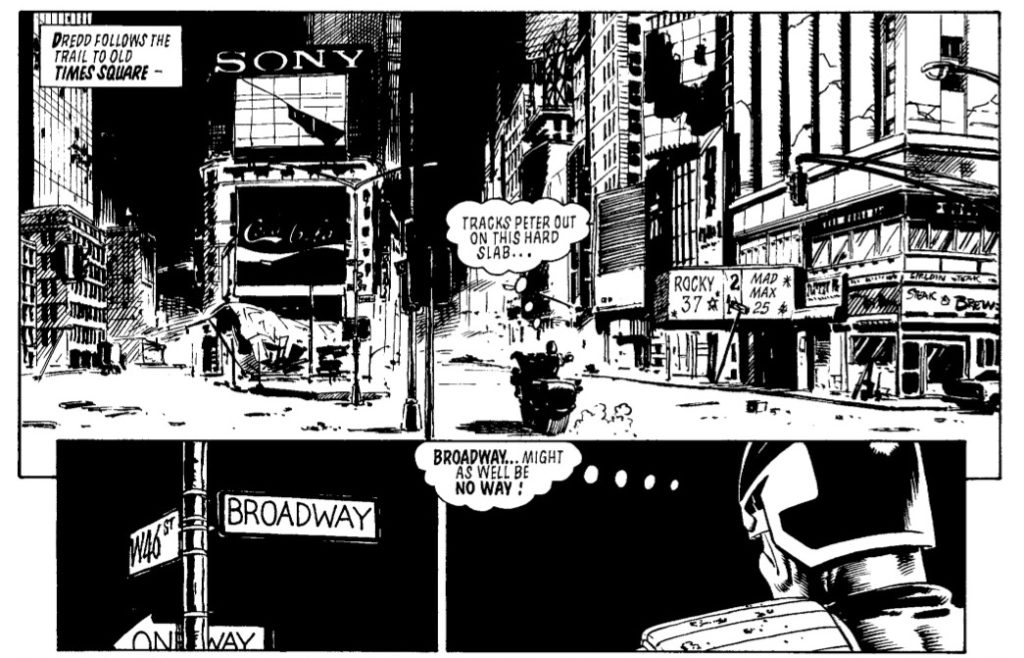