Previously on Drokk!: A decade into the comic book career of Mega-City One’s finest lawman, and it’s becoming increasingly clear that the writing partnership of John Wagner and Alan Grant is almost without peer — and also that Wagner and Grant are leaning more and more into the idea that the strip is named after someone standing up for a fascistic regime. 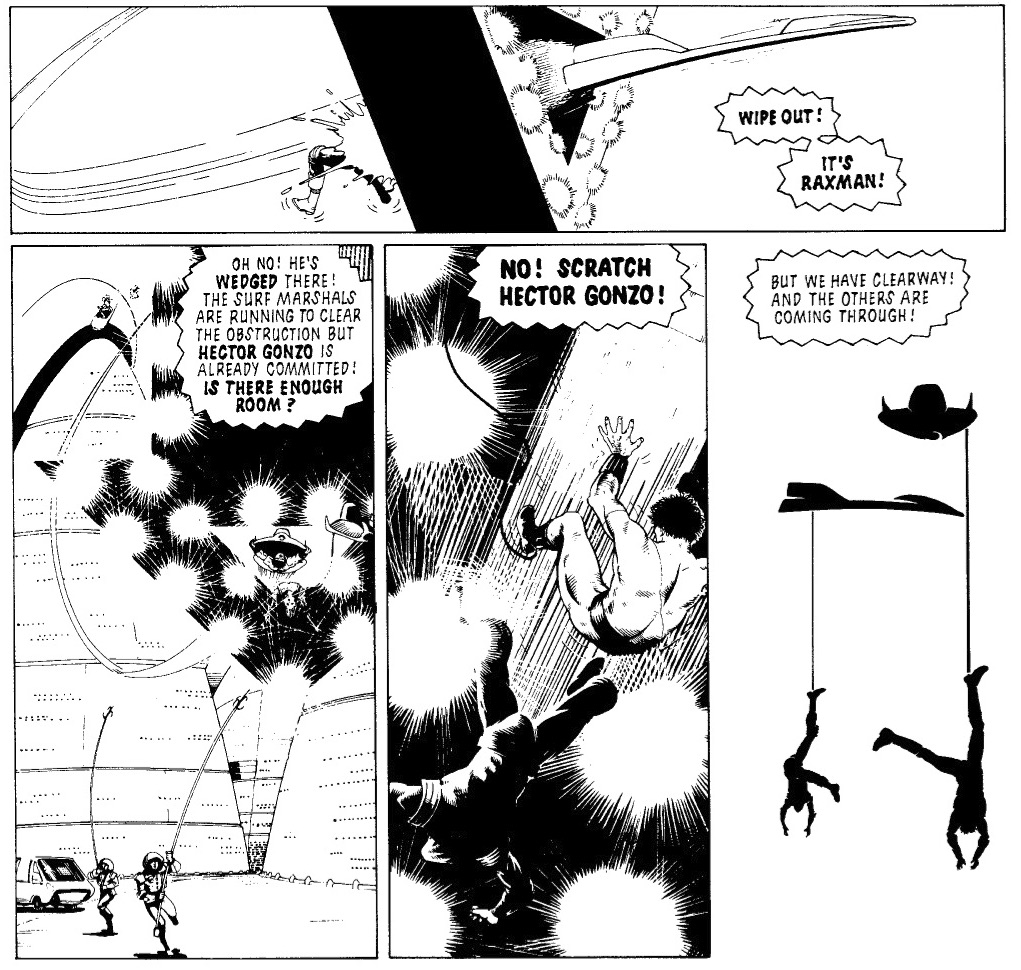 0:00:00-0:03:11: As we introduce what we’re covering in this episode, let’s embrace the fact that I get the volume number wrong; it’s actually Judge Dredd: The Complete Case Files Volume 11, not Volume 12. I knew this would happen when once the episode numbers and the volume numbers got out of sync! Anyway, it’s material from 2000 AD progs 523-570, from 1987 and 1988, with art by a whole host of people, including Cliff Robinson, Steve Dillon, Brett Ewins, Brendan McCarthy, Will Simpson and Jim Baikie. 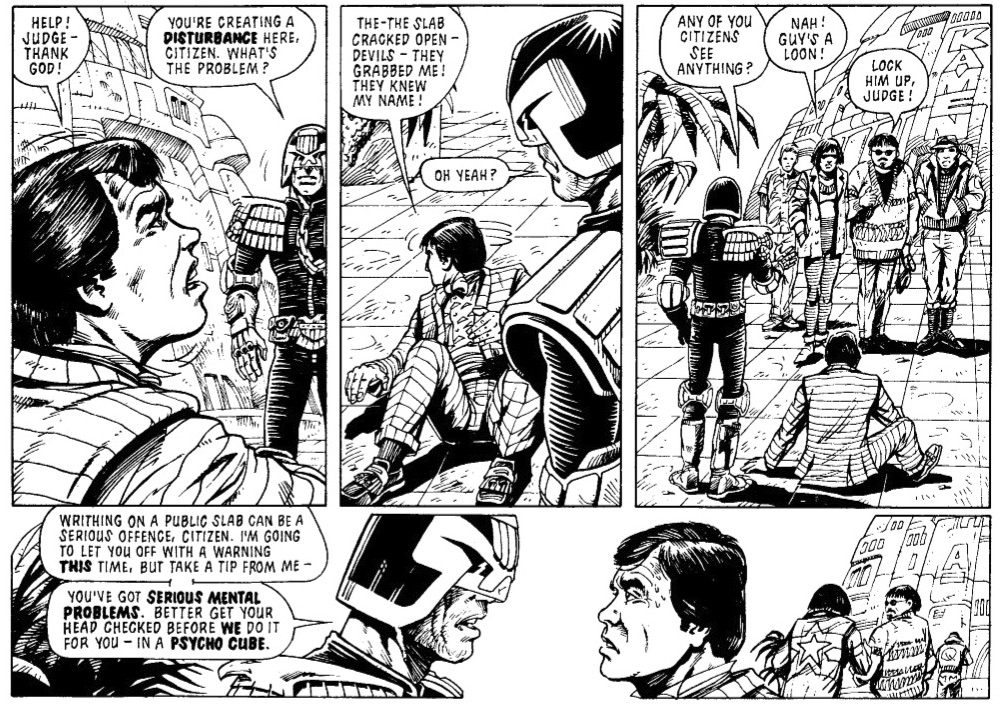 0:03:12-0:38:59: We immediately dive into things, with Jeff asking what my favorite story in the collection is outside of the two obvious choices, “Revolution” and “Oz.” I talk about my choices, which leads into my grand operating theory for the book, which is that it’s a collection where the Judges are waging a psychological war on the citizens, and are focusing on the optics and propaganda of maintaining power more than anything else. This, in turn, becomes a conversation about whether or not Wagner and Grant were planning future stories in advance, with evidence for and against the idea, and if this means that Dredd really is beginning to evolve in this volume or if I’m imagining it given what follows next. We also get into the difference between Dredd as a strip and the U.S. monthly comic, in the sense of the number of recurring concepts and characters as well as the importance of (admittedly dark) comedy to Dredd as a character and a strip, as well as Jeff’s choice for favorite story, the Judge-gone-wrong “Raggedy Man,” which features perhaps the greatest ending of a Dredd story in some time. All this and the scariness of Judges gone wrong, the importance of brevity, and the secret origin(s) of Garth Ennis. No, really. 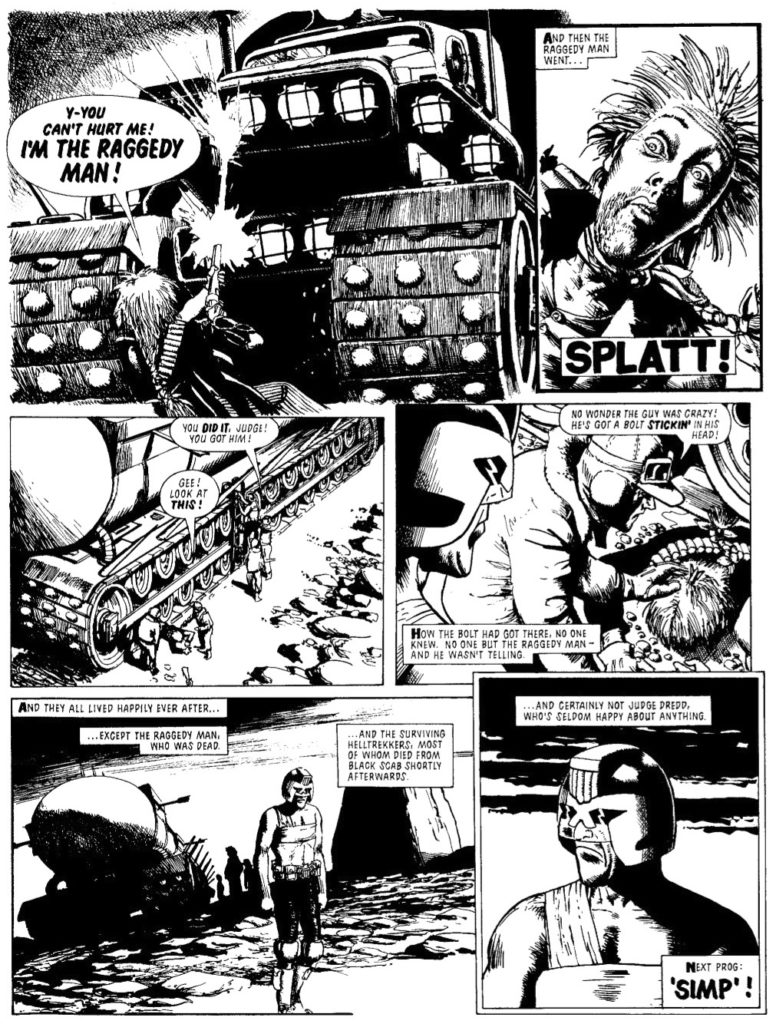 0:39:00-0:46:25: Jeff answers the traditional episode-end question about whether or not the volume would serve as a good introduction to new readers early with an uncertainty, and we talk about the power these stories gain from knowing what came before, as well as Wagner and Grant’s ability to write a good stand-alone adventure story. 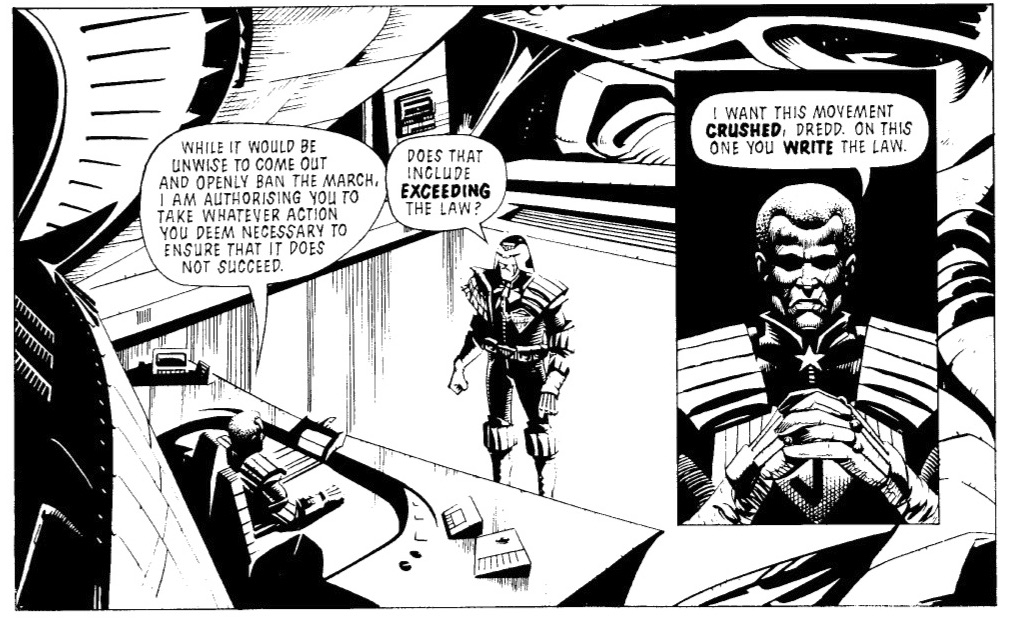 0:46:26-1:05:23: We turn to “Revolution,” one of the two highlights of the volume. It’s a sequel to “Letter From A Democrat” from Volume 9, and it’s the bluntest story yet in terms of portraying the Judges as the villains of the world pretty unambiguously. We talk about how powerful it is, how bold it is, how depressingly prescient it is, and what it means for the character and the strip as a whole. Spoilers: Jeff and I are very much fans of this story in particular; “it is a masterful achievement” might be a phrase uttered. 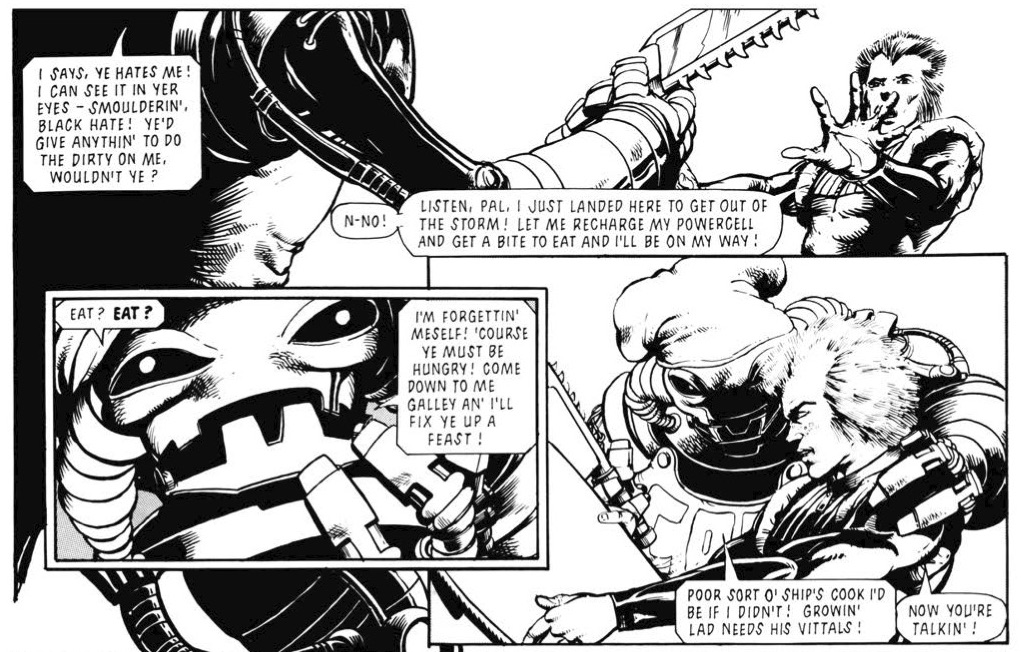 1:05:24-1:56:32: And so, to the biggest story in the volume, and its crowning achievement: “Oz,” the first mega-epic in some time, and perhaps one of the best in the series’ four-decade-plus run. Across a meandering 50 minutes, we talk about everything from the influence of earlier mega-epics to just how unimportant Judge Dredd actually is to the story, even though this might be an exceptionally important story in Dredd’s overall development as a character — although that might depend on whether you buy into my reading of the climax more than Jeff does. Also discussed: am I reading too much into the climax of this story and if I am, what is actually happening in it? The differing worldviews of Wagner and Grant and why this story broke up their writing partnership, how “Oz” ties in with, and acts as a culmination of, the larger themes in this volume, Dredd’s love of nuking countries, how dark is too dark for a Dredd story, and the joys of Dredd as a sports comic and Wagner and Grant as sports writers. We cover a lot, but you’d expect that for almost an hour’s worth of conversation. 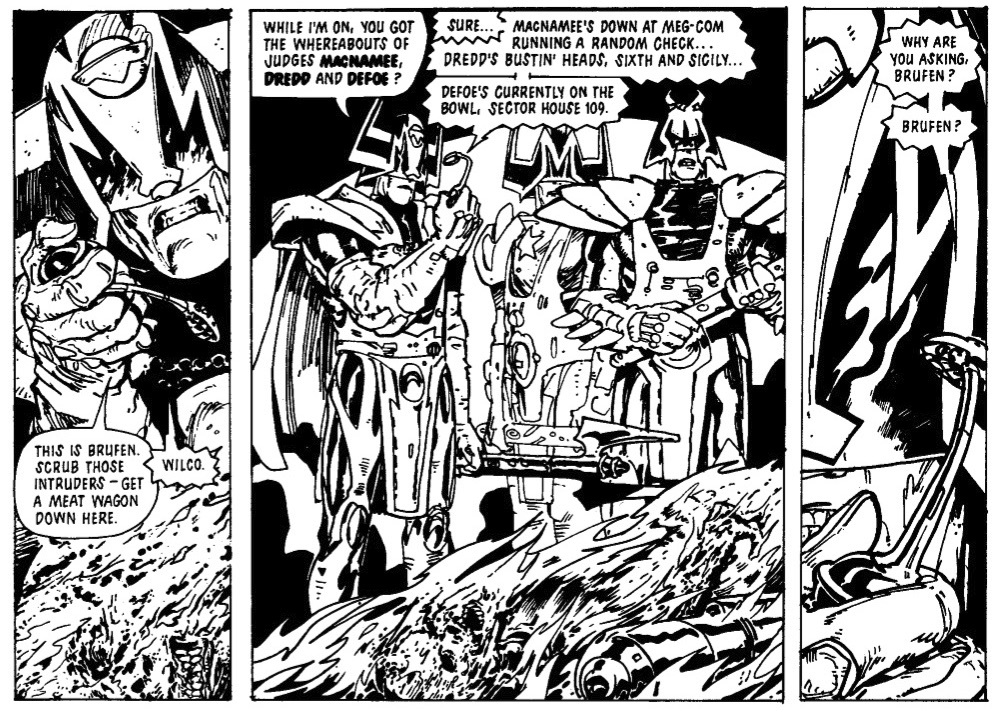 1:56:33-2:15:34: We drift towards the end in the old traditional way: Me waxing nostalgic about reading Dredd as a kid and not really understanding things, which leads onto a larger discussion about not getting things in comics as kids, as well as a brief mention of various pop culture references to be found in this volume and the evolution in the way Wagner and Grant approach such references in Dredd as a whole. I ask Jeff if he fancies following Chopper into his own series, and Jeff shares his ideas of what becomes of Chopper without having read those stories, and Mr. Lester also coins the new catchphrase of the podcast when he declares whether things are — wait for it — “Drokk or Dross!” Say it with us! 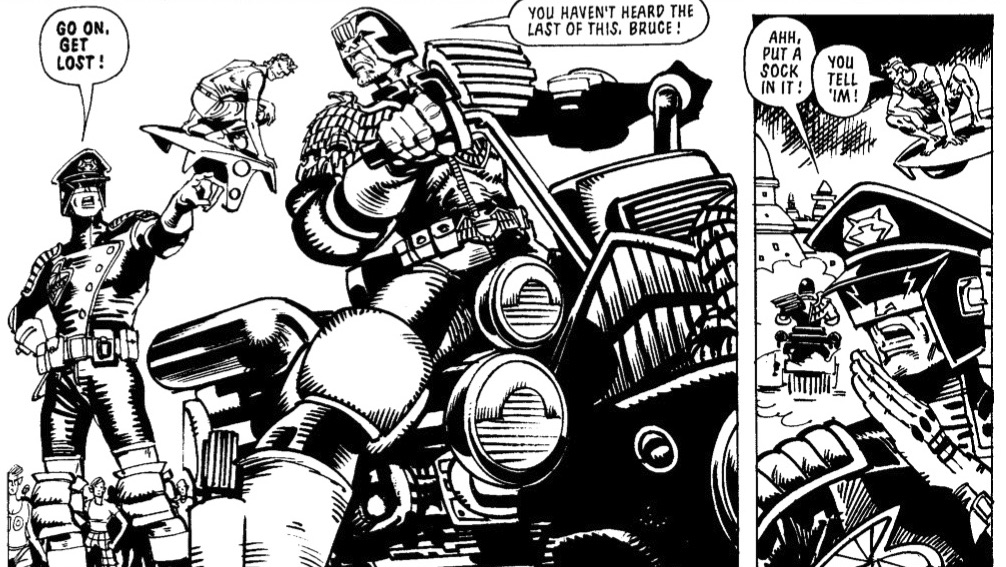 2:15:35-end: Things get wrapped up as we remind everyone about the Twitter, Tumblr, Instragram and Patreon, and let you all know that we’ll be back doing the Drokk! this time next month. (I also apologize for the technical errors that we’ve had lately, but if this post is live, then those are… hopefully behind us…? My fingers are crossed…)