Previously on Drokk!: We’re firmly in what commenter Jared so suitably termed “the Golden Rut” of Dredd, where everything is technically going well with the strip in both its 2000 AD and Judge Dredd Megazine incarnations, and yet, it’s feeling increasingly difficult to say anything about it. If only, say, Garth Ennis would return as writer or something… 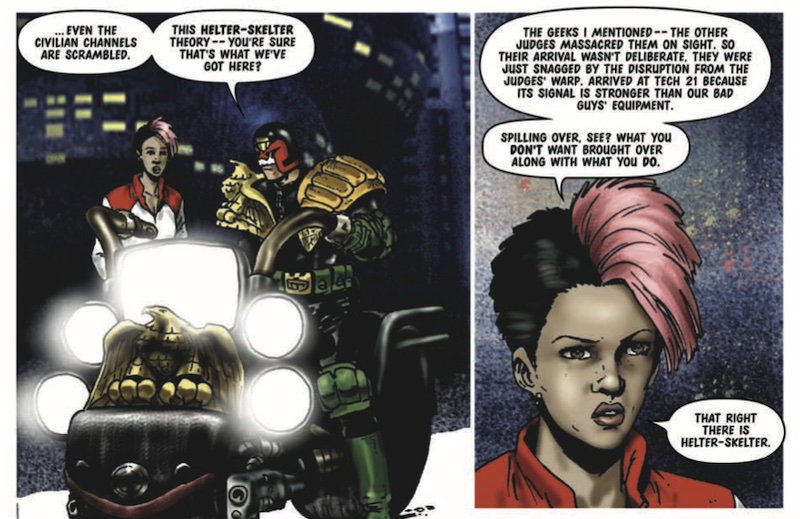 0:03:52-0:24:48: We dive into things relatively quickly, talking about the 10-part “Helter Skelter,” which marked Garth Ennis’ return to Dredd after almost a decade, during which time he’s become the toast of the American comics industry, thanks to the success of Preacher. We talk about how the story relies entirely Ennis’ fanboyishness about Dredd, which overwhelms the skills (and detachment) he’s displaying elsewhere in his career at this time, the many ways in which it fails as a piece of writing and whether that’s down to laziness or Ennis’ unwavering fanboy nature concerning Dredd, and the fact that the serial features that rarest of things: disappointing Carlos Ezquerra art. There is, at least, an explanation for that, which we also get into.

0:24:49-0:42:29: I attempt to segue from “Helter Skelter” into better stories but get in my own way by mentioning the contributions made by writer Alan Grant to this volume, which include the shockingly bad stoner comedy “Leaves of Grass” — guess what? Even when stoned, Judge Dredd is the law! — which Jeff, nonetheless, feels has a lot more potential than I do. (He also liked “Helter Skelter,” so perhaps this is the episode where Jeff is the good cop to my bad cop, for once.) (Wait, is that every episode?) I also talk about “Terrorist!” — yes, it actually has an exclamation point in the title — which comes from a well-intentioned place, but feels as if it betrays some deep-set prejudices in the minds of its creators. That gets us onto a brief discussion of whether or not it reflects a post-9/11 sensitivity, as well as whether the Robbie Morrison-written “Born Under A Bad Sign” does the same, albeit from a different direction. Also! When did The Wire start? That important question, answered! 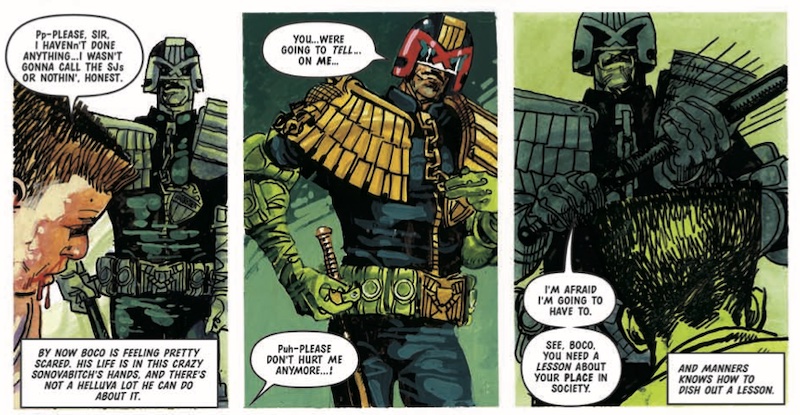 0:42:50-0:53:25: Surprisingly, we only spend 10 minutes on my favorite story in the volume, which is one that Jeff likes a lot, as well: “Bad Manners.” We discuss the ways in which it underscores the failure of the system, and succeeds at criticizing the Justice System of Dredd as a strip in a way that something like “The Runner” from last episode stumbled through. In a strip where ACAB is an unstated understanding, this is a story where the subtext pushes through to become the text. 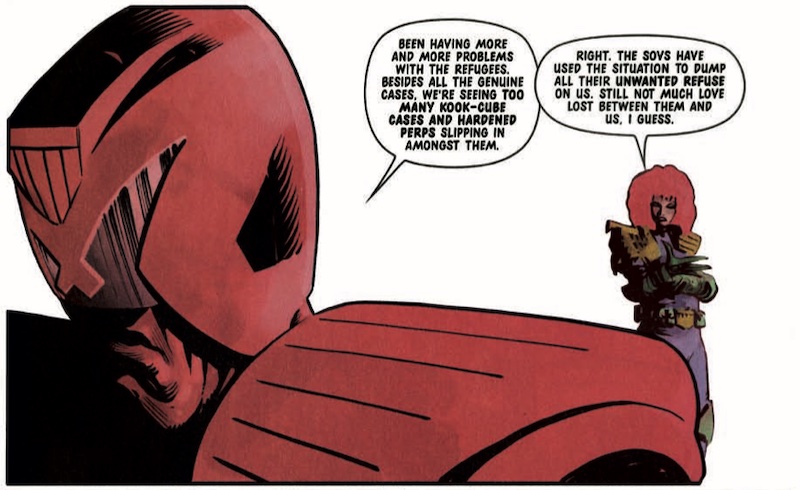 0:53:26-1:13:26: What starts as an attempt to talk about how the newcomer writers deal with Dredd in this volume — Robbie Morrison disappoints, while Gordon Rennie does surprisingly well, with a couple of his efforts reading like Wagner in places — ends up being an appreciation of what the artists are up to this volume, courtesy of singing Frazer Irving’s praises on his one-off “Asylum.” Under particular discussion are Cam Kennedy and Colin MacNeil, both of whom get the chance to shine in Wagner-written stories. Kennedy is responsible for a few stories this time around, but it’s “The Bazooka,” a Fatties story that he draws for Wagner in the Megazine that really shows off his gift for cartooning and physical comedy, while MacNeil handles “On The Chief Judge’s Service,” which is by far superior to last volume’s “The Chief Judge’s Man” in large part because of some very smart choices on MacNeil’s part. Also having their praises sung: Cliff Robinson, who Jeff compares to Chris Weston…! 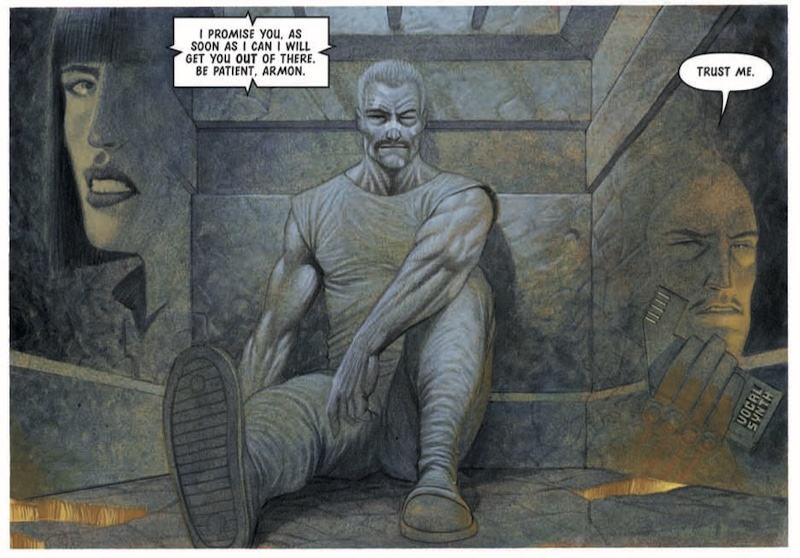 1:13:27-1:22:53: We talk a little about the context surrounding his volume — 2000 AD and related titles being bought by new publisher Rebellion, and Andy Diggle taking over as editor — as well as whether we’re ending the Golden Rut this time around. Also, Jeff brings up the “bonus story” in this volume, which leads to more Cam Kennedy appreciation. 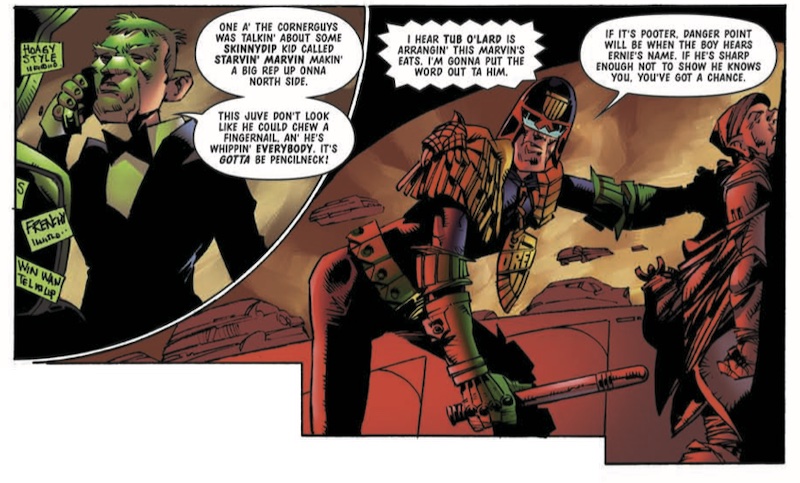 1:22:53-1:29:25: What are Jeff’s favorite stories in the book? (I’d already mentioned mine earlier, when talking about “The Bazooka.”) And is this volume Drokk or Dross? Spoilers: we both think it’s a strong Drokk, especially considering the running order of the book — the fact that “Bad Manners” is essentially the end of the book — there are another couple of shorts that follow, including a particularly disappointing Alan Grant story, but still — means that the reader is still thinking about it by the time they’ve finished, which helps considerably. 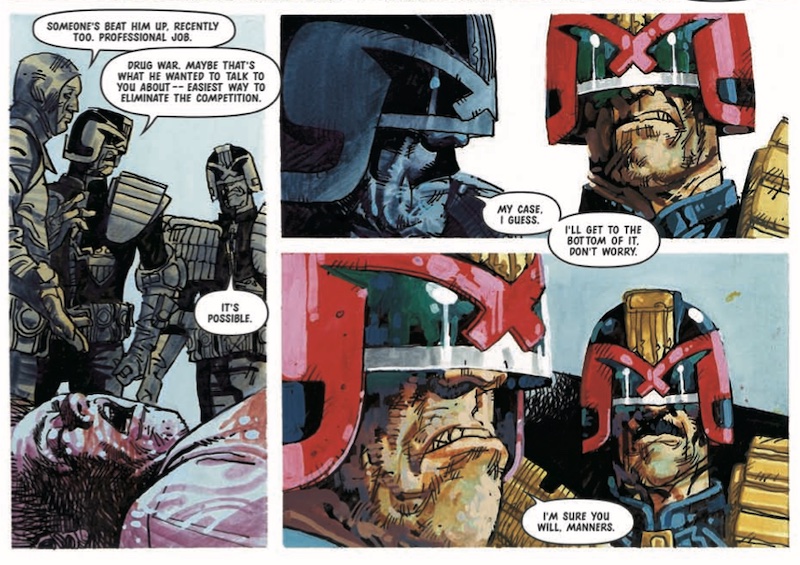 1:29:26-end: As we head towards the end of the episode, we look forward to Case Files 35 next month, and I discover that Americans apparently didn’t know what a helter skelter was, which kind of blows my mind. (We also mention the Twitter and the Patreon, because that’s what we do.) As with every single one of these, thanks for reading and listening; it’s very much appreciated.