Previously on Drokk!: If there was one thing we learned from the last episode, it’s that Jeff and I are more responsive to the Dredds we’re reading right now when they’re building something towards the larger continuity, rather than the one-off comedy strips that we’ve been reading for more than 30 volumes at this point. So what happens when we hit a volume that’s almost all one-off strips…? 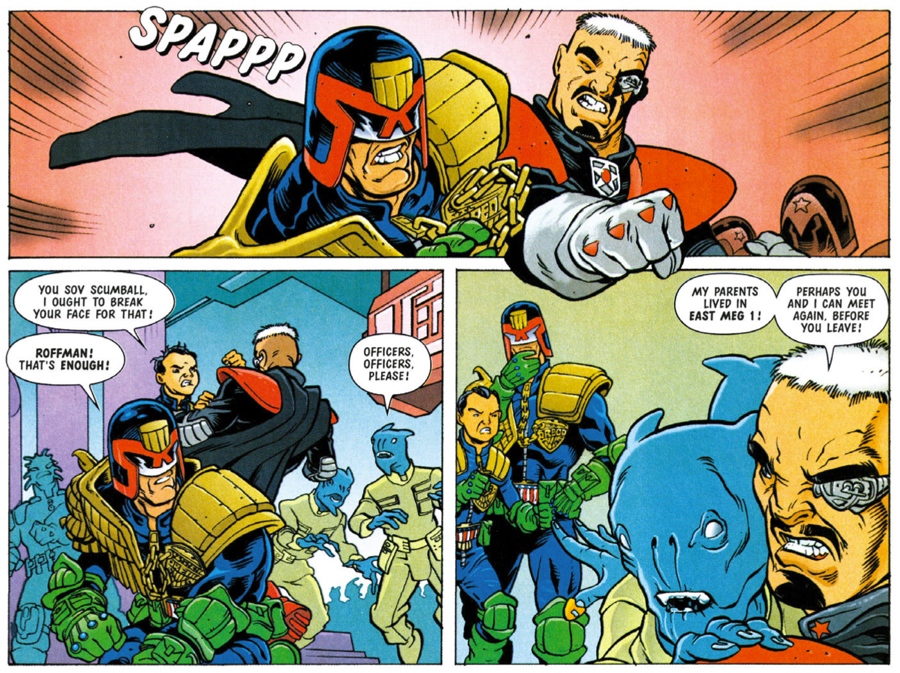 0:00:00-0:02:33: So here we are, reading Judge Dredd: The Complete Case Files Vol. 33, reprinting and collecting material from 2001’s 2000 AD and Judge Dredd Megazine; in short order, we introduce ourselves, the book, and I make a Block reference that is really just obscure and dumb in how it relates to this volume. I should be ashamed. 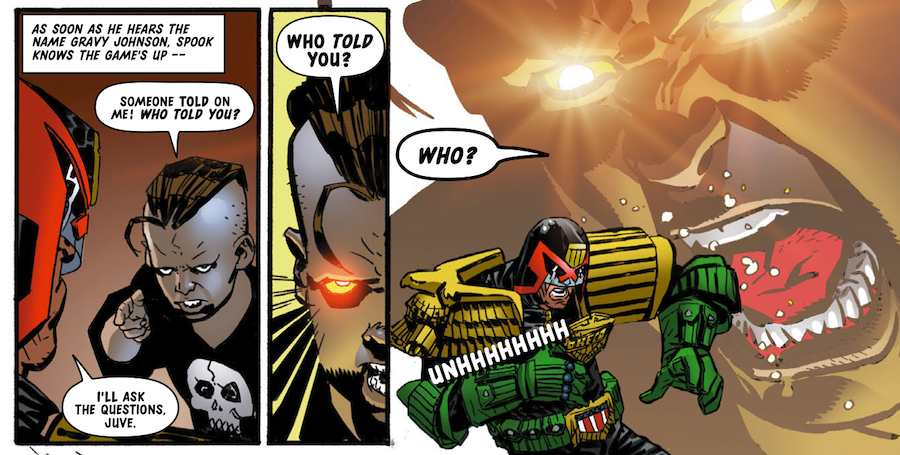 0:02:34-0:06:22: One of the things that’s notable about this volume — one of the few things; we spend time here talking about that this is another volume that is just fine,” even if that actually means “of high quality, but unremarkable in that because so many of these volumes are of such high quality” — is that it sees Gordon Rennie and Robbie Morrison installed as the new back-up writers to John Wagner, and it’s a good thing as both get Dredd in a way that we’ve not seen other writers manage before. In fact, two of Jeff’s favorite stories in the volume — “Relentless” and “Hell Bent” — are Morrison’s; my favorites are “The Runner,” “The Chief Judge’s Man,” “Bodies of Evidence,” and “Lawcon,” with Jeff sharing some admiration for the latter, as well.

0:06:23-0:20:24: We talk about what does and doesn’t work about “The Chief Judge’s Man,” and actually tend to agree on most of it, even though I rate it far more highly than Jeff due to a complete critical blindspot with regards to nostalgia around Will Simpson’s artwork. (I should have added in the podcast, but didn’t: this blindspot is a late onset thing, and only really exists with his Dredd work. I still dislike both his Hellblazer and Rogue Trooper work, oddly enough.) Nonetheless: we like the paranoia, we like the antagonist, but Jeff thinks that it’s just a little too on the nose and obvious, especially with the name of one particular character. He’s probably right! We also talk about “Relentless,” which has the opposite problem to “Chief Judge’s Man,” in that the art ends up elevating the writing, with Colin Wilson drawing the shit out of what, to me at least, is a relatively run-of-the-mill Cursed Earth adventure. (That said, it’s “run of the mill” to a Wagner degree, which is pretty fucking amazing for a neophyte Dredd writer like Robbie Morrison.) Also under very brief discussion, “The Moby,” a one-off story notable mostly because it’s an example of Jeff’s beloved trope of “Dredd versus an out of control vehicle.” 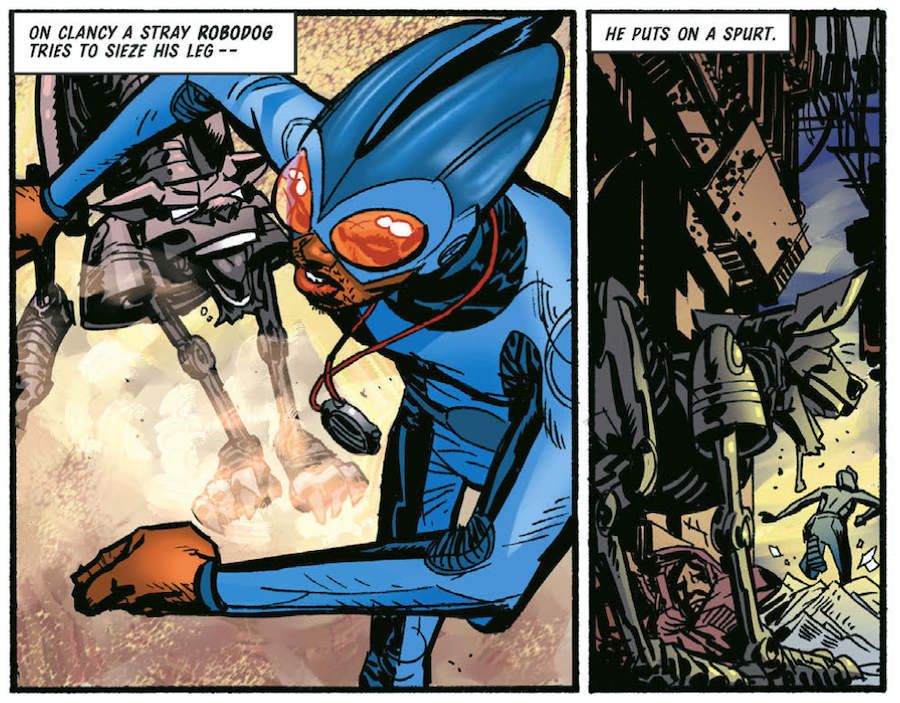 0:20:25-0:40:07: “The Runner” is one of my favorite stories in this volume by far, but Jeff is not convinced because of the fact that it breaks a fourth wall too far by nature of featuring a Black man shot by police. We go back and forth about what works and doesn’t work for each of us in this one-off — I can’t get over that last line, but Jeff makes a particularly interesting argument in favor of it, surprisingly — and why it might feel out of place surrounded by comedy strips and not expanded outwards. (Jeff also mentions two changes he thinks would have made the strip better, at least one of which I think is entirely there in the comic itself.) Also: Duncan Fegredo’s a really good artist, everyone.

0:40:08-0:51:46: We run through another couple of my favorite stories: “Bodies of Evidence,” a ridiculous romp that distinguishes itself through Cam Kennedy artwork and some great character names — Ivana Freebie is an all-time classic, let’s be honest — and “Lawcon,” which answers that question on everyone’s lips: “What if John Carpenter’s The Thing, but Judge Dredd?” If that doesn’t sound like a good time to you — even with the art of Richard Elson, which could best be described as “too pedestrian for Dredd, but not bad per se.” (He’s done some other work for 2000 AD that I actually like a bunch; his stuff here isn’t particularly great, though.) 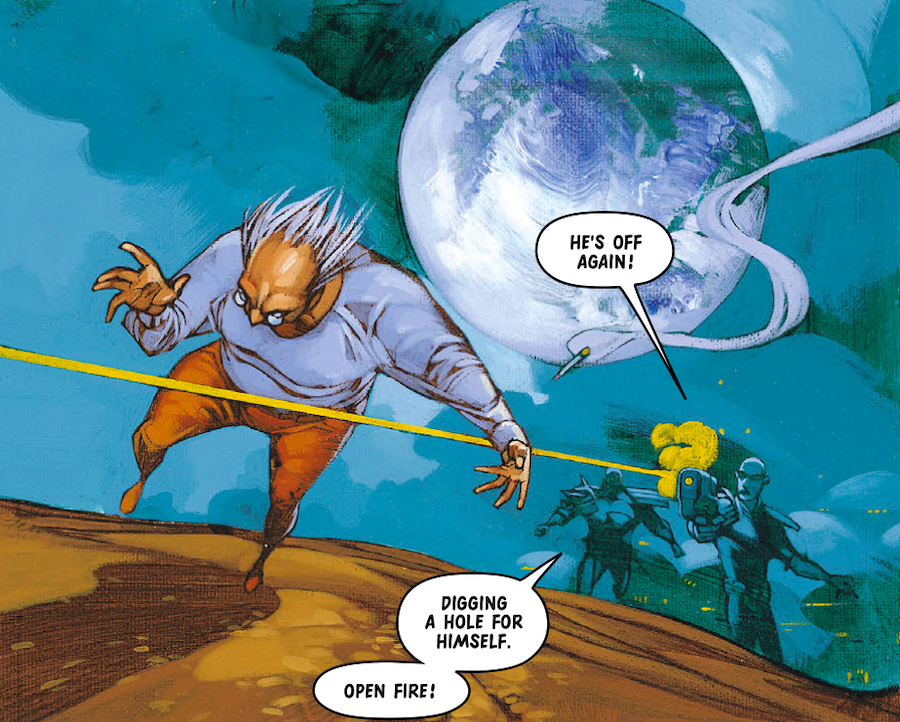 0:51:47-1:19:11: We return to a subject we’ve touched on a bunch in recent episodes… namely, how difficult it is to find something new to say about work that is good, but itself not really saying anything new. Is the problem us, or the comics? (I think it’s the former, Jeff seems to believe otherwise.) It’s not just navel gazing, though; Jeff has a theory about the lack of psychological depth in the supporting characters of Dredd as written by John Wagner, and we also talk about whether “Foot Patrol” or “Kicking the Habit” is the worst story in the volume. Spoilers: it all comes down to art in the end, at least for Jeff. Siku might be an evocative painter, but he’s really not big (or good, for that matter) on narrative work. Meanwhile, I’m still struggling with Wagner actually naming a character “Judge Hitler,” because what the ever-living fuck. All this, and Jeff making a casino metaphor about the tightness of slots that I’m still not entirely sure I understand. 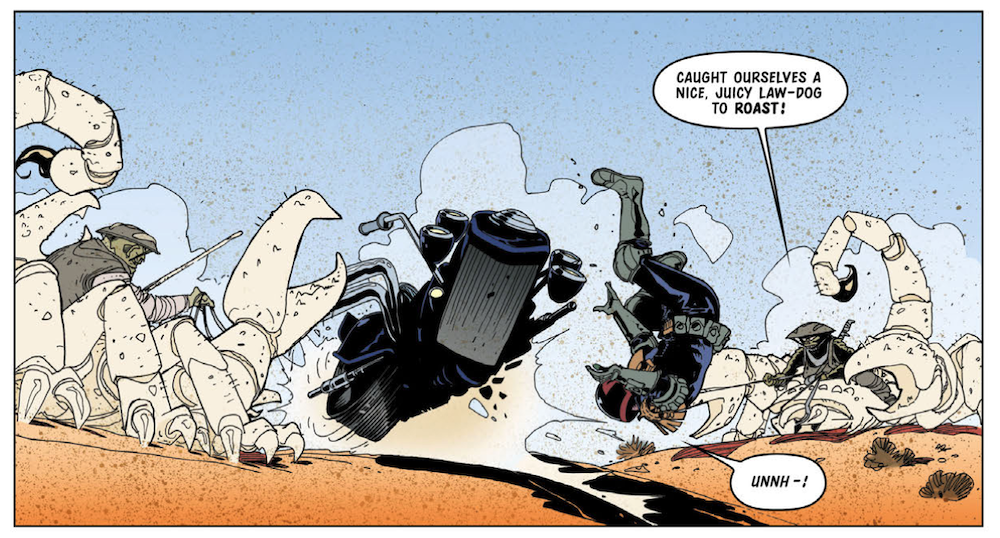 1:19:12-end: We’ve already gone through favorite stories and least favorite stories, so there’s only one last thing to get up to: Drokk or Dross? After sorting that question out, it’s time to wrap things up, mention the Twitter and the Patreon, and look to the future with hopeful hearts and a dream that we’re going to get some more continuity heavy material. (If nothing else, there is a sequel to “The Chief Judge’s Man” with art by Colin MacNeil.) As always, thank you for listening and reading.