Previously on Drokk!: While I usually use this space to talk about where we are in terms of the larger Judge Dredd mythology, there’s only one way to properly discuss what’s come before this episode: I have talked up the Judge Dredd/Aliens: Incubus crossover for a lot of episodes, and now it’s finally here. Get ready.

0:00:00-0:02:37: Welcome, dear friends, to the podcast that is closer to the end than you might think. (Wait until the end of the episode for more information on that.) This time around, we’re reading Judge Dredd: The Complete Case Files Vol. 36, collecting material from 2000 AD and The Judge Dredd Megazine from late 2002 and early 2003; we speed through the introduction before I mention Siku, which quickly leads us to…

0:02:38-0:18:11: For once, we start with a discussion about the visuals of Dredd in this era, starting with a brief discussion about the many weaknesses (and, thankfully, some strengths) of Siku, a much-derided artist in earlier episodes who returns for a one-off in this volume. More derision is delivered on this go-around to Ian Gibson, an artist previously lauded by Jeff, who might just be out of sync with what we’re looking for my this point, as well as the solid-but-uninteresting Paul Marshall; we also talk about color choices in this volume — and, indirectly, media choices, in terms of computer coloring versus paints — but perhaps the most important thing mentioned in this section is this: Mick McMahon’s Dredd now has lips. 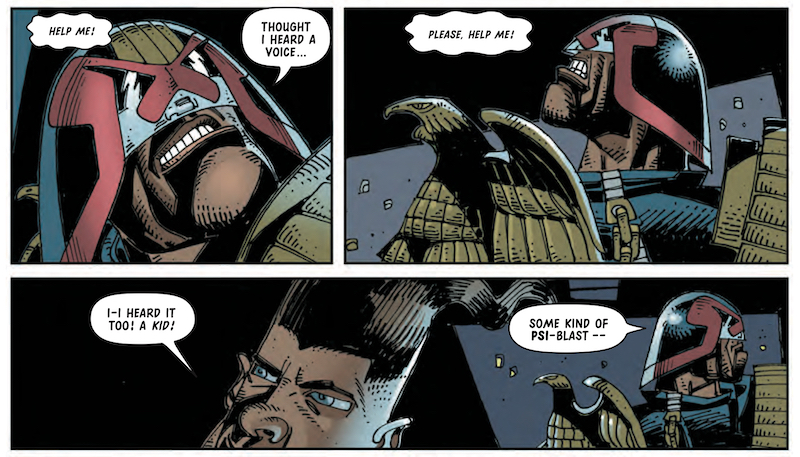 0:18:12-0:31:02: Moving swiftly on, Jeff and I enjoyed a particularly rare moment of the two of us independently having the same reaction to something in a Case Files; namely — Gordon Rennie has, seemingly without notice, turned into quite an impressive understudy for John Wagner. Both of us read some of his contributions to this volume — most notably, “After Hours,” although Jeff’s also a fan of his “Give Me Liberty” — and thought it was actually Wagner’s work, albeit “John Wagner on a bad day”… something that we genuinely both mean as a compliment, as we try to unpack here. What makes Rennie’s Dredd suddenly feel so authentic? What does writing a good Wagner Dredd mean? We try to answer both questions, and arguably succeed to some extent.

0:31:03-0:47:10: What starts as a brief discussion about Jim Baikie’s art in this volume quickly becomes a potted history of Baikie’s career, and then, on an entirely different note, both of us expressing our disappointment in “Rotten Manners,” the final installment in the “Bad Manners” trilogy about a corrupt Judge that, impressively, manages to do almost everything wrong that the first story did right: it’s too broad, too clean, and far too confident that the system will succeed. It would leave a particularly unpleasant taste in our collective mouth, if it wasn’t for… 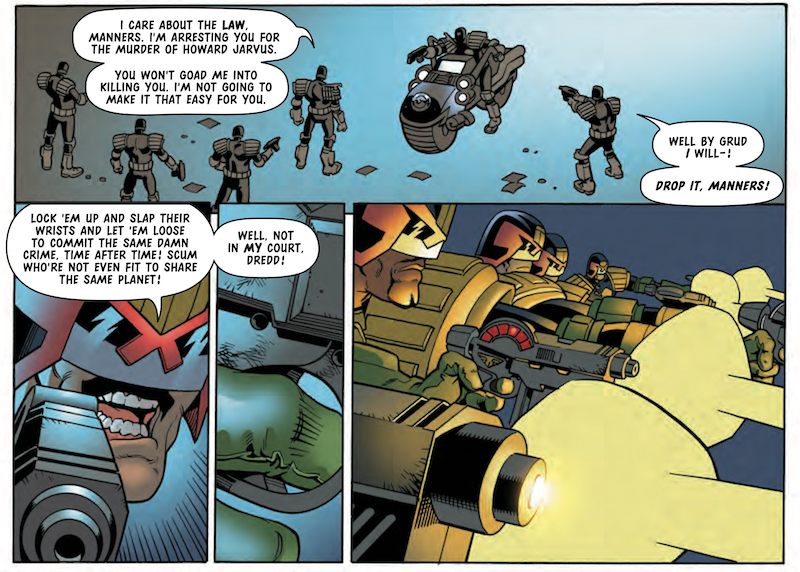 0:47:11-1:19:37: Perhaps surprisingly — well, I was surprised, at least — Jeff turns out to have dug Incubus, the Dredd/Aliens crossover, as much as I hoped he would, with a couple of caveats relating to his overall suspicion of the Alien franchise and narrative problems therein. Nonetheless, this isn’t just a great Alien(s) comic, it’s a great Dredd story too, and we talk about why that’s the case, the things that make the story work so well as both, and the ways in which the two different properties provide something that fits so well with the other. Also! We sing Henry Flint’s praises a lot, and still it’s arguably not enough. Really, this is just great comics right here. (And Jeff brings up the videogame BroForce, because of course he does.) 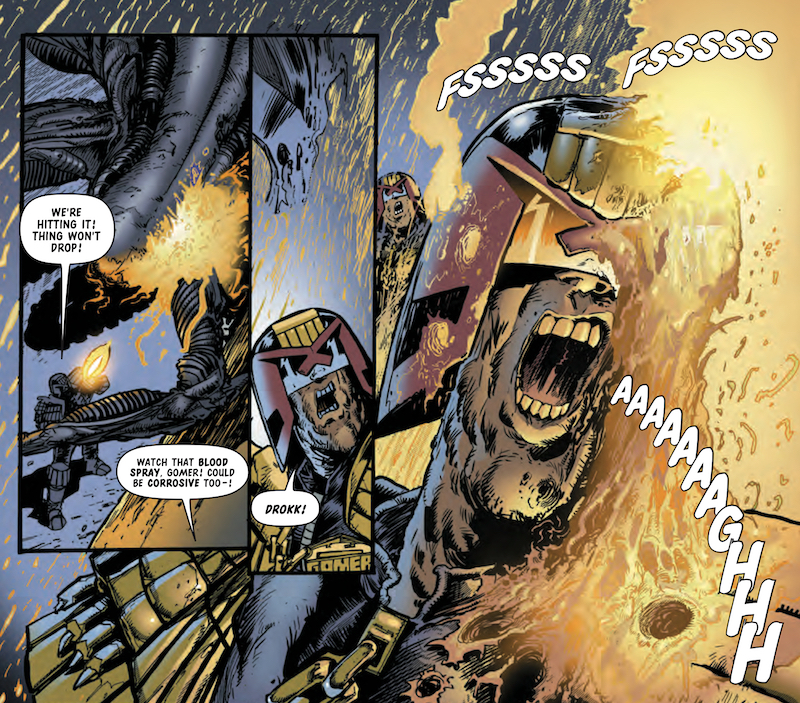 1:19:38-1:27:37: It sounds as if we’re about to wrap things up by mentioning whether the volume is Drokk or Dross, but no! Instead, we have a diversion about “Out of the Undercity,” another story in the book that tenuously connects to Incubus, and then we talk some more about the Judge Death connections and references to the Aliens franchise in general. What else do you expect, if not our getting in our own ways as we’re talking? 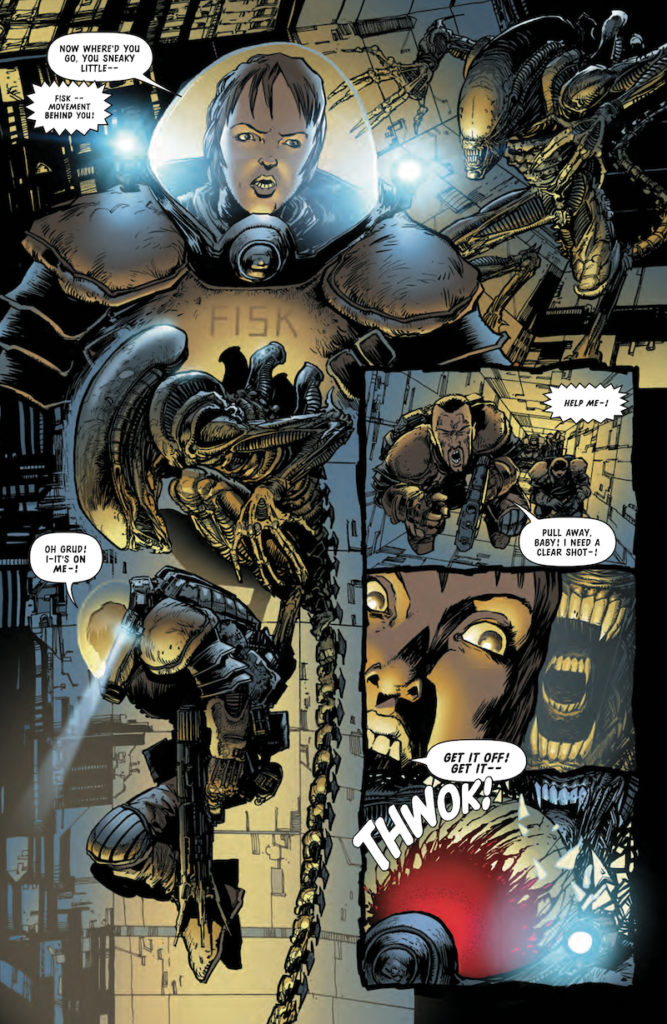 1:27:38-end: Now, we finally get to wrapping things up by talking about our favorite stories that aren’t an Aliens crossover in the volume — “Zoom Time” being mine, and “Give Me Liberty” being Jeff’s — as well as the overall leap in quality of this volume, and briefly looking ahead to what’s coming up before mentioning the Twitter and Patreon, and enjoying Jeff’s ever-evolving voice of Dredd outro. One thing we didn’t talk about but should have: we’ll be back in two weeks for a new Wait, What?, so enjoy next week off, Whatnauts.