Previously on Drokk!: We’re definitely in the homestretch when it comes to Drokk!, with just a couple of volumes of the Complete Case Files waiting for us after this one. We’re also definitely headed towards what I’d term the modern era of Dredd, with Wagner anchoring a group of writers capable of delivering just what you want from Mega-City One on a regular basis… although, in the case of this volume, we’re still working out some of the kinks in that respect, as you’re about to discover. 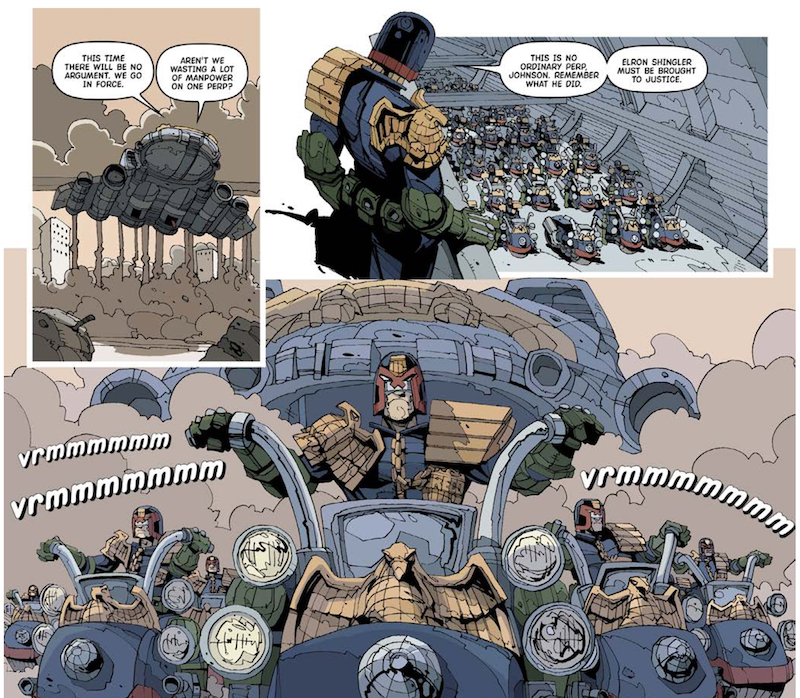 0:00:00-0:06:08: After a metatextual, self-referential cold open, we introduce the book we’re reading this this episode — Judge Dredd: The Complete Case Files Vol. 38, collecting material from 2003 and 2004 — and talk about how oddly incongruous it is to have a Reservoir Dogs-referencing cover from thes era, and complaining about how poorly John Smith and Alan Grant’s material compares to everything John Wagner writes for this book, because Wagner is on fire this time around. 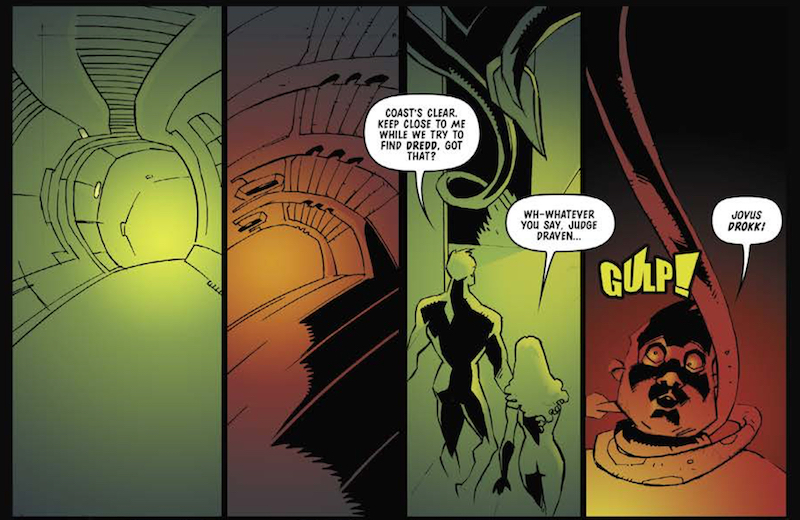 0:06:09-0:13:46: Just how bad is the John Smith-written story “Meatmonger”? Bad enough that Jeff calls it, “among the worst opening salvos a Case Files has had,” and he’s not wrong. It’s not just Smith’s fault, though; as much as his story misses the mark in a way that honestly is unusual for Smith, the story is also doomed by the artwork of Siku, the very opposite of a Drokk! favorite, who produces his worst efforts to date with some terrible storytelling, bad rendering, and absolutely mind boggling layouts. It’s… not good, really.

0:13:47-0:24:21: Also not good is Alan Grant’s contribution to the book, “Master of Fear.” While this story boasts a pretty great art job by John Burns, the lack of Grant giving a fuck is clear on every single page of this staggeringly underwhelming, ill-considered serial that we end up likening to Grant reworking an unused Batman/Scarecrow story with minimal effort in order to make a paycheck. Again, let’s quote Jeff, who calls it “a real wet fart of a story.” Harsh but fair! 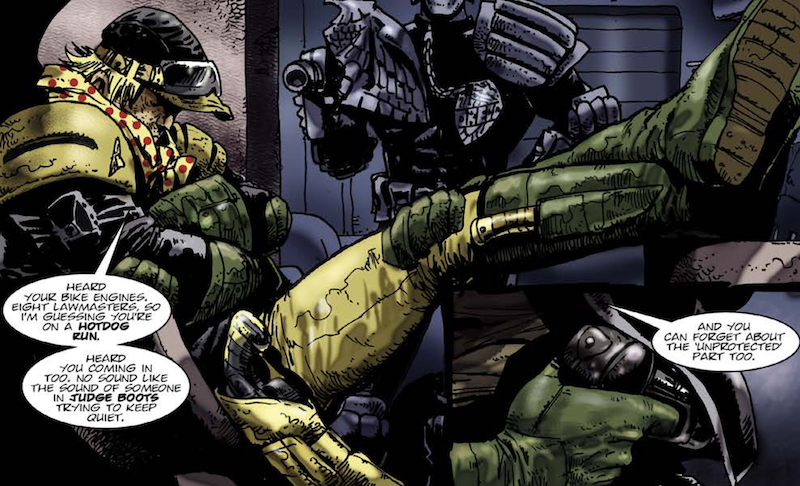 0:24:22-0:37:07: Before we turn to Wagner’s contributions, let’s check in with Gordon Rennie, the only other non-Wagner writer to show up in this volume. In the past, we’ve both complained about his writing and raved about it, likening him to John Wagner on an off-day. For the most part, we’re on the latter train of thought this time around, enjoying two of his three stories in this collection. (The less said about the third, the more-than-a-little-racist “Hong Tong,” the better; it’s an unfortunate return to the Asian Stereotypes Are Just Fine, Right? school of 2000 AD writing, which is something I think all of us had hoped had been left in the past.) He’s the John Wagner version of Garth Ennis when it comes to Dredd, we suggest, but it makes more sense when you listen, I promise. 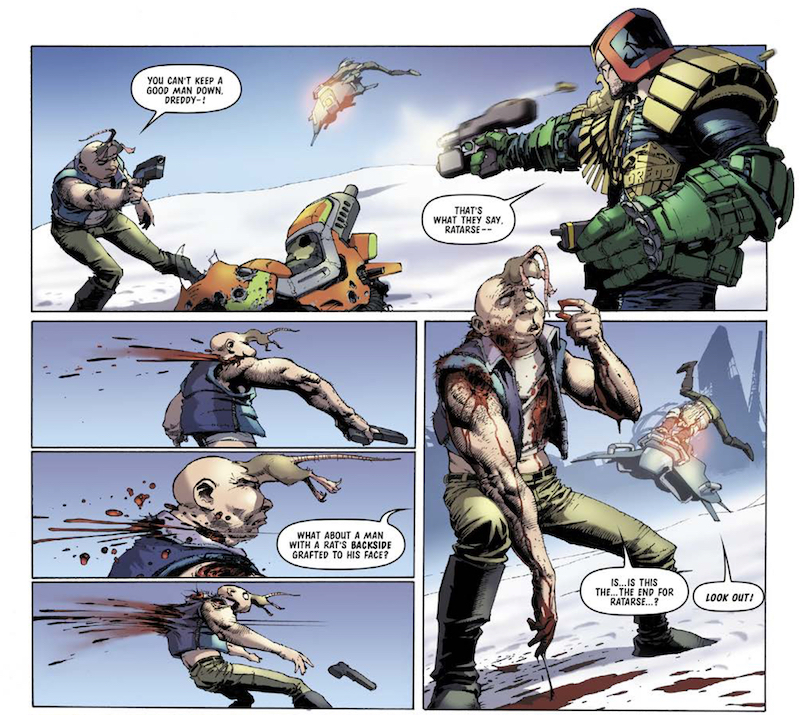 0:37:08-1:00:23: How do we feel about John Wagner’s work in this volume? The phase “Wagner is so fucking good in this book” might have been used, and we discuss just why that’s true by going through the so-called lesser stories he offers here, all of which demonstrate his continued skill in going just that little bit further than you expect in almost every single case — all while making what he does look effortless and enjoyable. Of particular mention are his skill with silly comedy one-offs, and the way in which he makes the three-part “Cincinnati” a masterclass in building tension and diverting the reader’s attention. I think that Wagner is easily one of the greatest comic writers working today, but Jeff goes one further: he thinks that Wagner is definitely the best comic book writer when it comes to parodying sportscasters. (He’s not wrong, either.) 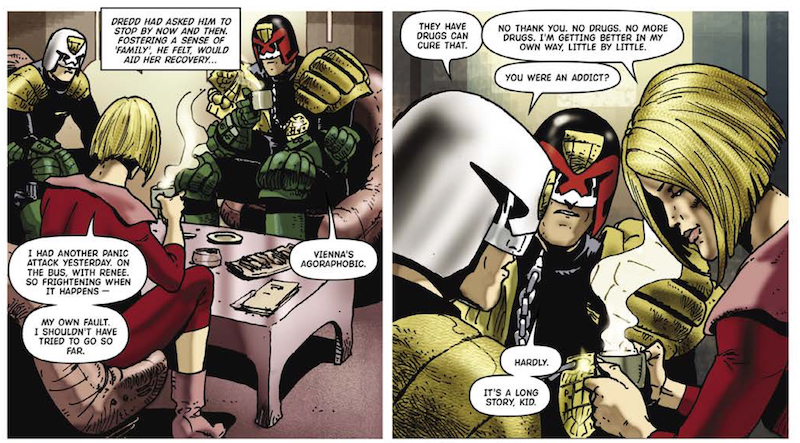 1:00:24-1:31:55: Unsurprisingly, we spend the most time this episode on the best story in the book, “Brothers of the Blood” — a family drama by Wagner and the great Carlos Ezquerra, both of whom are demonstrating just how good they are at what they do by doing something just slightly different: this is a more subtle, more character-driven story than we’re used to in Dredd as a whole, and especially from these two creators. It’s also a kinder story, as we both note, that really digs into the smaller ways in which Dredd has changed since his first stories, and also the ways that the clone brothers than Dredd has are both like him and unlike him. It’s also something that, of all things, raises the possibility that the loss of his original clone sibling Rico might have traumatized Dredd and stunted his emotional growth — a fate that the second Rico, new clone Doleman, and Dredd’s niece Vienna have all managed to avoid in their own ways. It’s Wagner and Ezquerra taking a victory lap while moving the emotional weight of the Dredd story forward in a small, but very important, way, and it’s just exquisite.

1:31:56-1:37:11: Of course, “Brothers of the Blood” is both of our picks for our favorite story in the book, with Jeff choosing “The Good Man” as his second favorite, while I go for “Finger of Suspicion,” both of which are examples of the silly but enjoyable one-off comedy strips he writes. When it comes to favorite non-Wagner strips, we both plump for the same Gordon Rennie/Ezquerra collaboration, “Sturm und Dang.” To the surprise of no-one, this volume is a very definite Drokk, not a Dross. 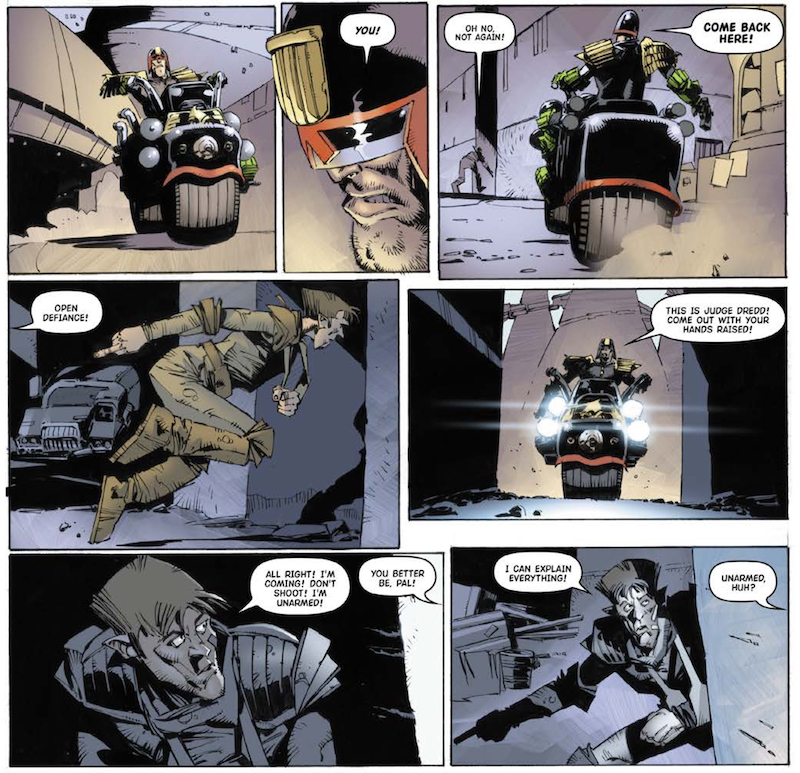 1:37:12-end: We wrap things up, as is our want, and I tease the next episode, which features the return of none other than Pat Mills to the collected editions. Is Jeff ready? Are any of us?!? As always, thank you for listening and for reading along. It’s very, very much appreciated.

3 comments on “Drokk! Ep. 42: “He Slips Into The Role Almost Automatically””