00:00-10:27:  Greetings!  Remember us? We do…we think? Jeff had some travels; Graeme’s new job is taking him to three convention in six weeks—SDCC and C2E2 already and ECCC next weekend—and it’s taken a lot out of us, to be honest. However! Graeme has come back from two cons and managed to stay healthy, which is genuinely impressive.
10:27-22:38: In the course of recounting C2E2, Graeme talks about what might’ve been its “highlight:” the Chris Claremont panel that *blew up* and its aftermath.
22:38-55:20: The idea that the Claremont story blew up in a way that Graeme rightly calls “inexplicable,” leads Jeff to talk about a possible connection in a completely different context—the findings of microaggressions waged by cartoonist Phoebe Gloeckner against students in her Graphic Narratives class at University of Michigan. Perhaps there’s a connection between the two and for better, healthier reasons than might be imagined?
55:20-1:04:54: Back to the cons! Graeme found how a lot of the differences between C2E2 and SDCC can be summed up in their talkback panels. He went to both (one of which Chloe livetweeted), and found the people running the conventions had very different ways or responding to feedback.
1:04:54-1:06:58: Another highlight of the Cons? The Todd McFarlane Spawn panel at SDCC! Hoo boy.
1:06:58-1:23:17: The Sandman! Neil Gaiman’s The Sandman! Neil Gaiman’s The Sandman, now on Netflix! Graeme’s watched two-thirds of it; Jeff has watched zero-thirds…what’s it like? What’s going on with it?
1:23:17-1:34:05: Speaking of media companies in which investor interest trumps the release of product: hey, Warner Bros./Discovery! S’up? But also: Oni/Lion Forge! Valiant! Tapas! 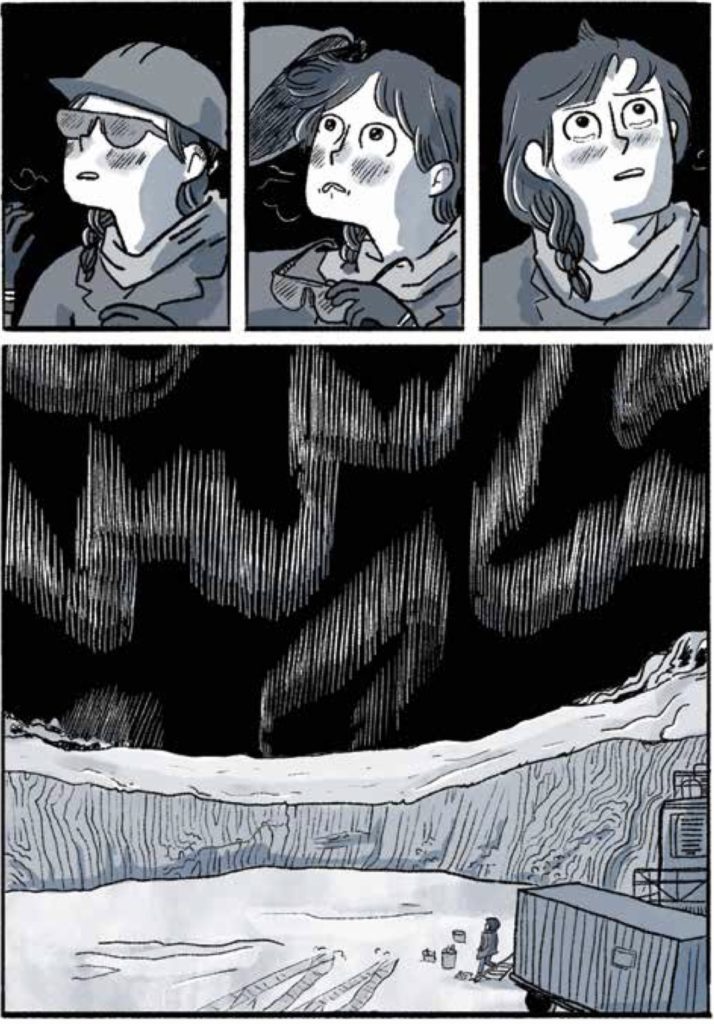 1:34:05-1:39:44: Oh hey, let’s talk about comics we’ve been reading, while there’s still some time left in the episode. To start we wax rhapsodic about Kate Beaton’s Ducks: Two Years in the Oil Sands which is extraordinary. Apologies if we are vague in our effusiveness, but we both think there’s so much to be gained from just walking in to it cold. Do pick it up, however: it really is tremendous. 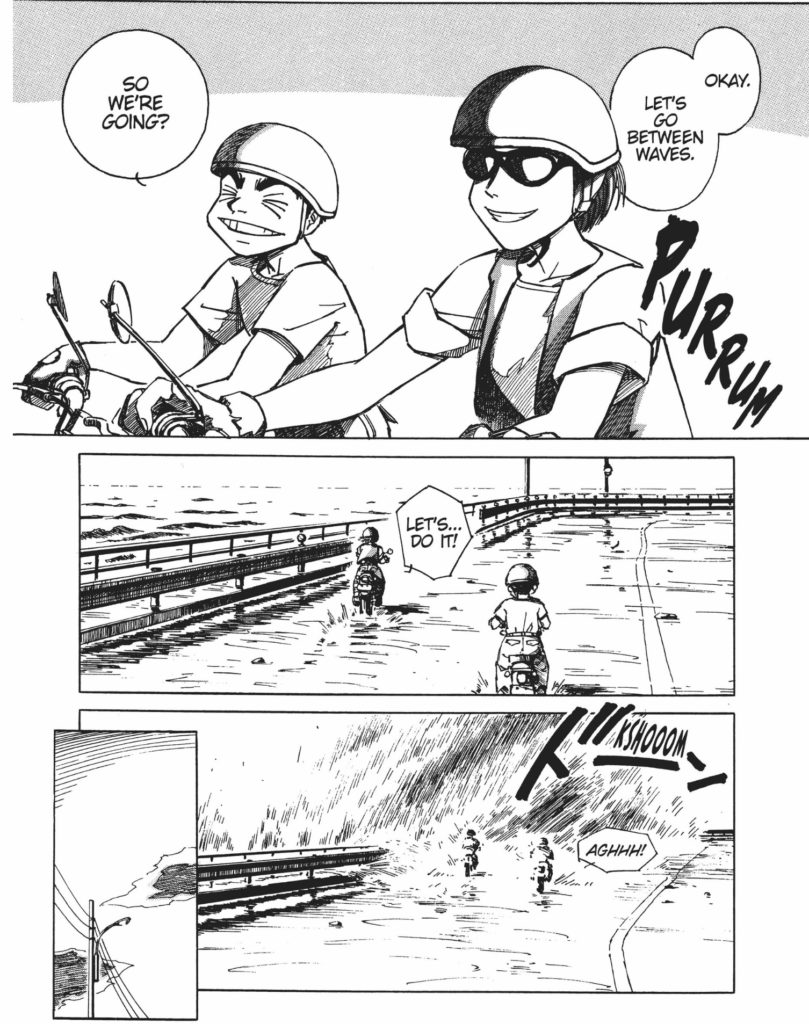 1:39:44-1:44:29: Props to podcast listeners Bruce Baugh and Skye who both recommended Yokohama Kaidashi Kikou by Hitoshi Ashinano. Jeff bought the first volume of the new deluxe editions coming out from Seven Seas, and he loves it like crazy. 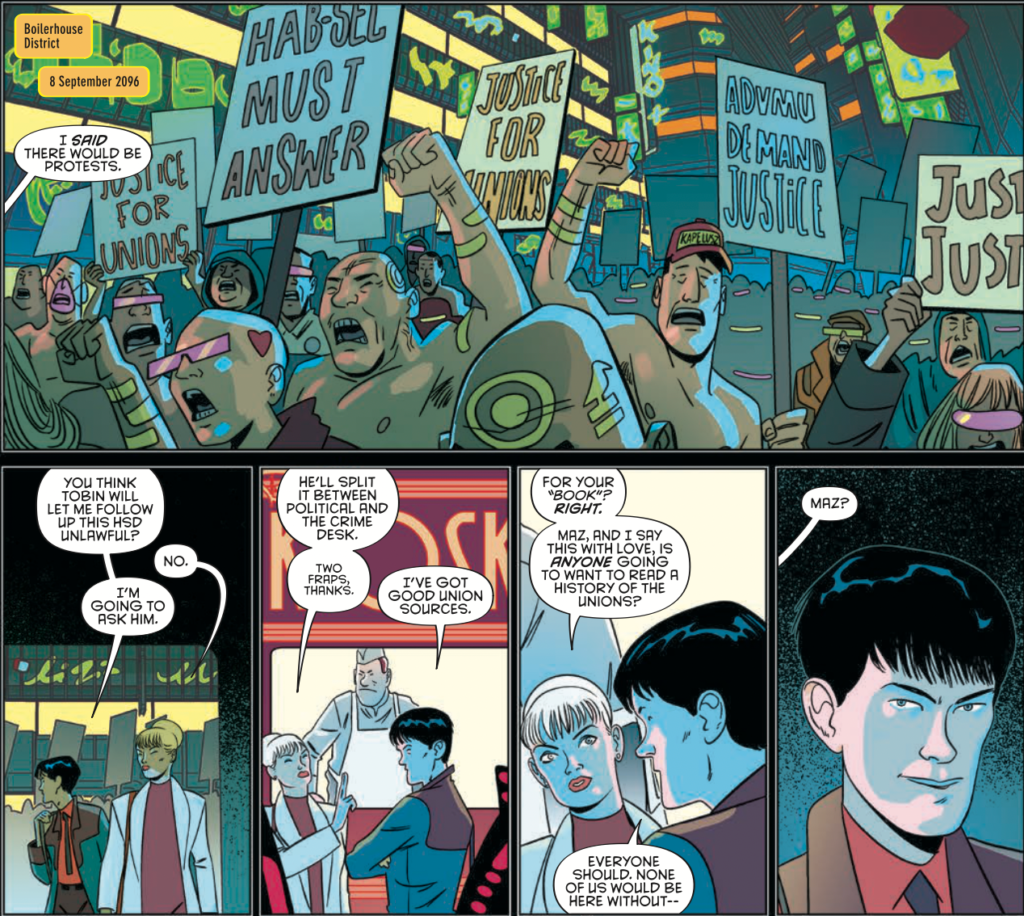 1:44:29-1:54:10: Also an object of passion for Jeff—though apparently not one especially well-centered in his memory—these webcomics by Abhay using the power of Midjourney to generate the images. Among the things I did not remember about it, however, was talking to Graeme about it already during one of the skip weeks, as well as the upcoming adaptation of The Abolition of Man by Carson Grubaugh (also using Midjourney); and the John Wagner/Cam Kennedy Judge Dredd story “Beyond Our Kenny” which, with many hijinks and shenanigans, was actually uncomfortably prescient about all this way back in….1990!?
1:54:10-2:05:53: As for Graeme, he very much wants to talk about how he was “floored” by book five of Brink by Dan Abnett and I.N.J. Culbard (due out at the end of November 2022). After four volumes focusing Bridget Kurtis and her battle in the space Habitats of the future against future cults, the fifth volume focuses on a journalist investigating a story that threatens to turn everything the inhabitants of Brink think they know—and the readers of Brink thought they knew—on its head.
2:05:53-:end Closing comments? Next week is a skip week and then….? We are back with Drokk, yes. Read Volume 38 of Judge Dredd: The Complete Case Files and join us here in two weeks, that we can say for certain. (Don’t get me wrong, we have more to say, we’re just much less certaion.)
And oh yes:  Graeme’s newsletter (https://www.getrevue.co/profile/ComicsFYI!) and new gig! Plus:   Stitcher! Itunes! Instagram! Twitter together and separately: Graeme and Jeff! (and Chloe, but also check out the excellent writing available through her Patreon!) Tumblr, and  on Patreon where a wonderful group of people make this all possible, including Empress Audrey, Queen of the Galaxy, to whom we are especially grateful for her continuing support of this podcast.
NEXT WEEK:  Skip week!  Then join us in a fortnight for Drokk!, featuring Judge Dredd The Complete Case Files Vol. 38 and join us here next week!!