Previously on Drokk!: The 38th volume of Judge Dredd: The Complete Case Files was a high for the series to date, and arguably the best of this latter era of stories thanks to some strong work from writer and character co-creator John Wagner. So… what happens when we have a volume where Wagner takes a bit of a back seat to other writers again…?

0:00:00-0:07:18: We’re approaching an end to Drokk!, with this episode covering Complete Case Files Vol. 39, a volume released earlier this year and the second-to-last volume of the series currently available. Unfortunately, as we quickly get into, this is also a volume that falls far short of the heights we’ve come to expect from Judge Dredd in recent episodes — so much so that we end up taking quite a tangent about our shared love of Garth Marenghi’s Darkplace. (For those who were unaware of the novel I mention, read here.) 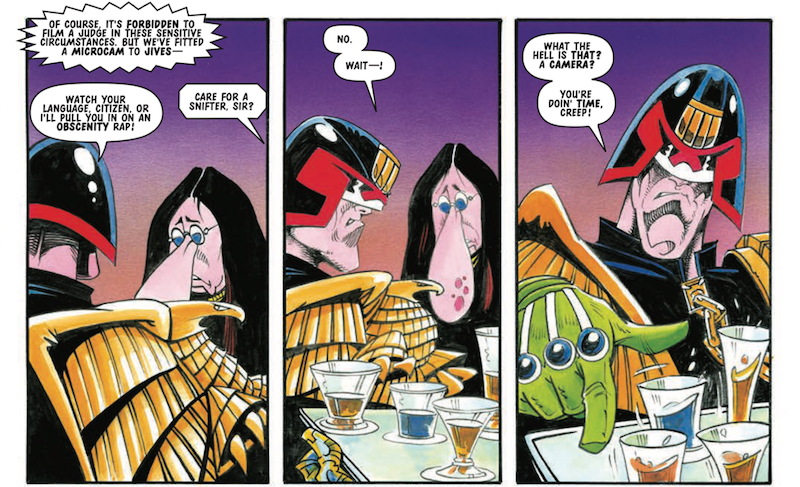 0:07:19-0:21:14: I’d love to say that we quickly got back on track, but this is an episode where we meander more than a little; nonetheless, as this is a volume that features not only John Wagner writing, but also that of Pat Mills and Alan Grant, Jeff shares his “My Three Dads” theory of Dredd, and we pick apart the ways in which the three writers differ, which comes down in large part to a lack of subtlety and nuance, but also intent. Does Pat Mills still bring the Thrill Power, as Jeff suggests? Has Alan Grant entirely lost it? And what of John Wagner, who also underwhelms in some of his work here? Also under discussion: just how much I dislike John Ridgeway’s artwork in this volume, which mostly comes down to, “I hate bad computer coloring.”

0:21:15-0:31:51: What do we expect from Dredd stories at this point is the matter under discussion, as we talk about two genuinely weird product placement ads — one of which stars the band Placebo, of all things — as well as some stories that are genuinely terrible, but in ways that feel acceptable and appropriate for this series. Questions we ask, even if we don’t necessarily answer: What makes some kind of failures seem disruptive, while others are just fine, if underwhelming? How old is Si Spurrier? And is it okay to tell a bad Dredd story if it’s one that Wagner and Grant have already told? 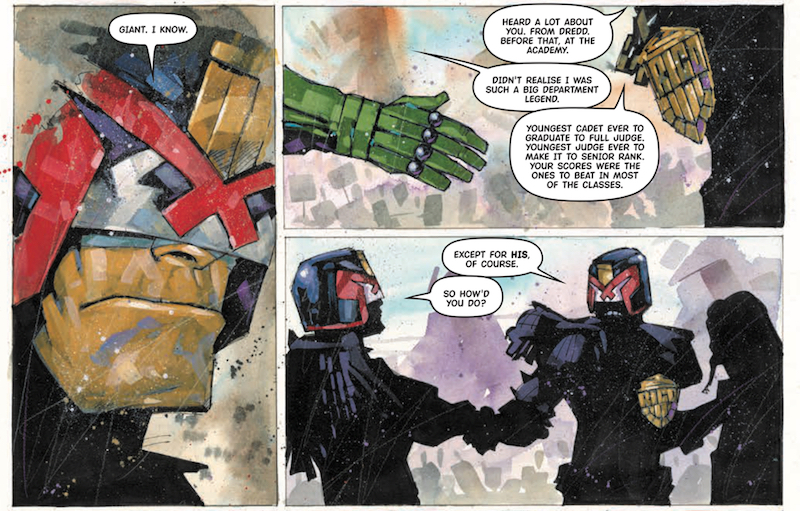 0:31:52-0:47:58: A conversation about the importance of the artist to Gordon Rennie’s stories — mostly centered around Simon Davis’s and D’Israeli’s art for two separate stories in this volume, both written by Rennie — leads into a more narrow discussion about the story “Prodigal,” and Rennie’s understanding (or misunderstanding) of two important recurring characters for the strip, and what kind of interactions we’re looking for from background characters in Dredd. Which itself leads into…

0:47:59-0:53:58: …Just how does John Wagner handle character arcs for Judges that aren’t Dredd? Does Wagner allow for that kind of thing? I suggest so, and offer some examples, but Jeff and I talk about the rules attached to such stories. 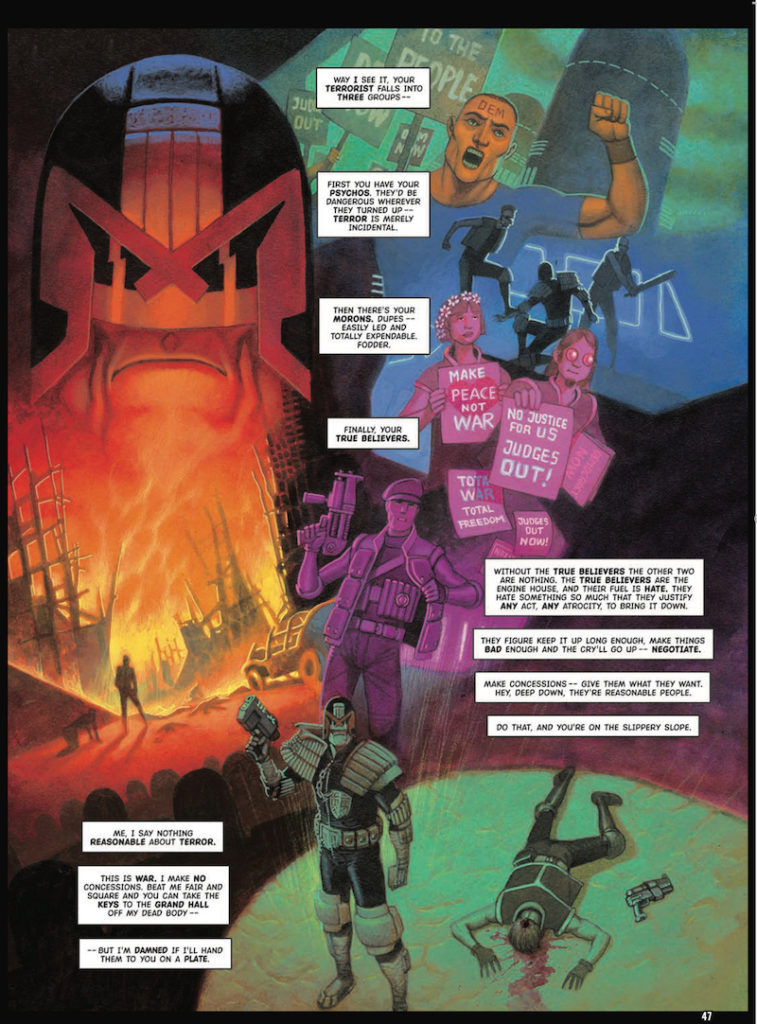 0:53:59-1:14:48: A sign of how smart Jeff is, and how not smart I am, comes when we discuss the story “Terror,” one of two great Wagner stories in this volume: Jeff is immediately drawn the strip’s meta-commentary on the Northern Irish “Troubles” in this story about terrorism, and I didn’t even notice that when reading, because I was too focused on whether or not Total War as a terrorist group is intended to be an allegory for the Judges themselves. I explain my reasoning, and Jeff explores it, and we talk about the ongoing war between terrorists and Judges that’s been happening in the background of the strip for decades by this point, as well as parallels that this story has with “America” (the Dredd story, not the country). 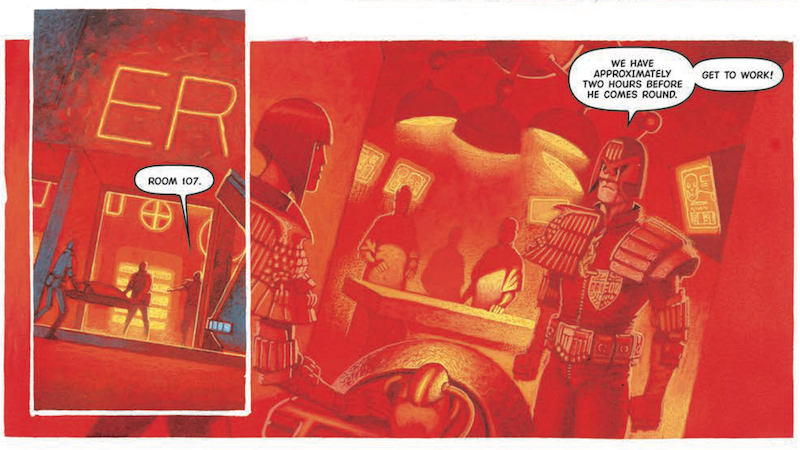 1:14:49-1:29:06: The other great Wagner story in the book is “Six,” which sees a return for P.J. Maybe after far too long, in such a way that immediately recalls the movie Seven — the title’s the clue — and lets Jeff talk about his unfamiliarity with Kevin Spacey back in the day. We also touch on how wonderfully small Maybe appears in his newly victorious form, and the commentary that allows the story to offer. 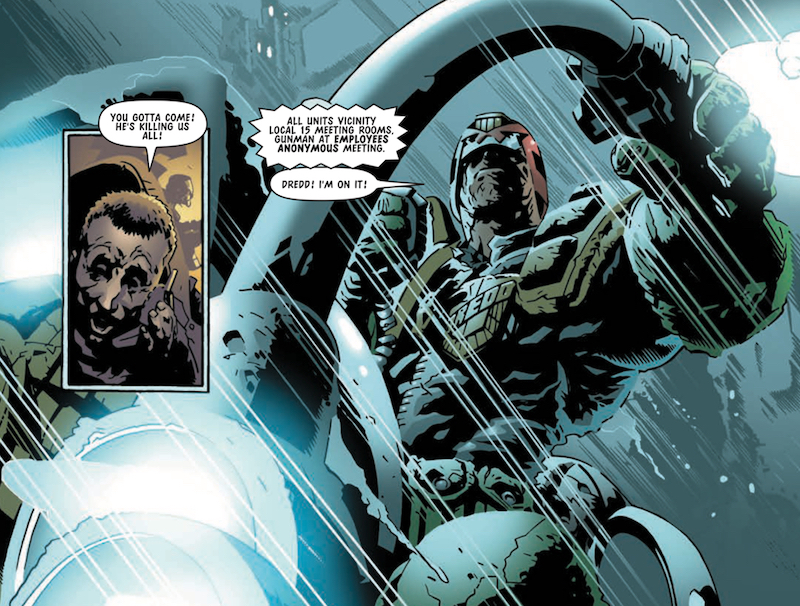 1:29:07-1:46:23: What looks as if we’re going to start talking about the artists in this book (we almost do) veers off into a discussion of “My Beautiful Career,” a story that I like far more than Jeff, which then itself veers into a discussion of how Wagner undercuts some of his own positioning about how bad the Judges are by letting Dredd have a moral conscience. This leads into an idea that, in general, this book just can’t quite get it straight what it wants to say about Judge Dredd and the world he lives in, but perhaps we’re imagining that… 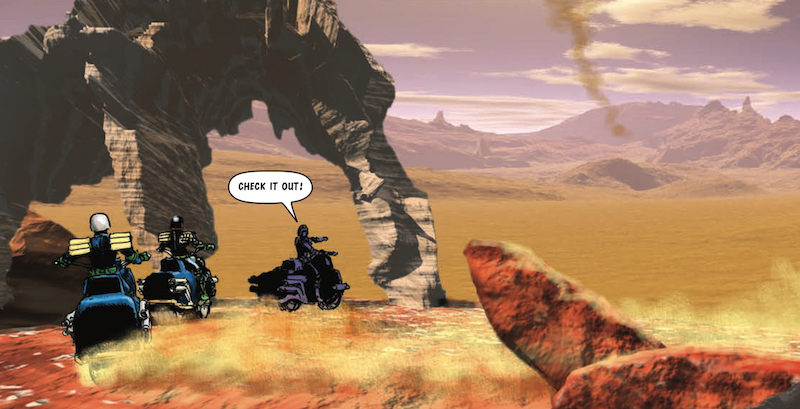 1:46:24-1:56:34: An attempt to wrap things up has us talking, again, about how weak this volume feels especially in comparison to the last one we read. No wonder we end up pronouncing it Dross instead of Drokk, with obvious favorite stories (“Terror” for Jeff, “Six” for me), and obvious least favorite stories (“At Home with the Snozzburns,” which is Alan Grant at his worst), too. It is, as we point out, a very strange experience to have such a bad volume out of nowhere this close to the end of things.

1:56:35-end: And speaking of the end, we wrap things up with the usual mentions of the Twitters and the Patreon. As always, thank you for reading along, and thank you for listening. Commenters, feel free to sound off below as to whether or not we were being too unfair on this volume, but I promise: I really don’t think that we were.