Previously on Drokk!: We’re approaching the end of Drokk!, as unlikely as it seems — with just one volume of the Complete Case Files remaining before we catch up with Rebellion’s publishing schedule, it felt like time to finally take care of some unfinished business. Namely, Judge Dredd: The Restricted Files Vol. 4. This… was a mistake. 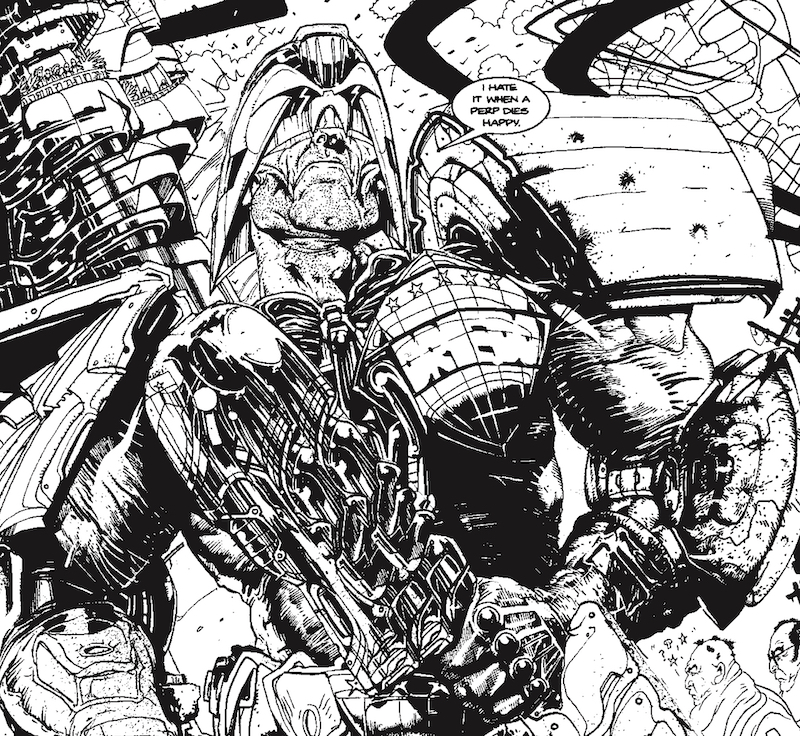 0:00:00-0:05:31: With very little preamble, Jeff and I are very quickly sharing just how much we dislike this volume — a collection of stories from 2000 AD and Judge Dredd Mega-Specials, Annuals and Yearbooks, from 1994 through 1996, and some other ancillary, non-regular issues material — which we both agree features some of the worst stories we’ve ever covered on Drokk!. This leads to… 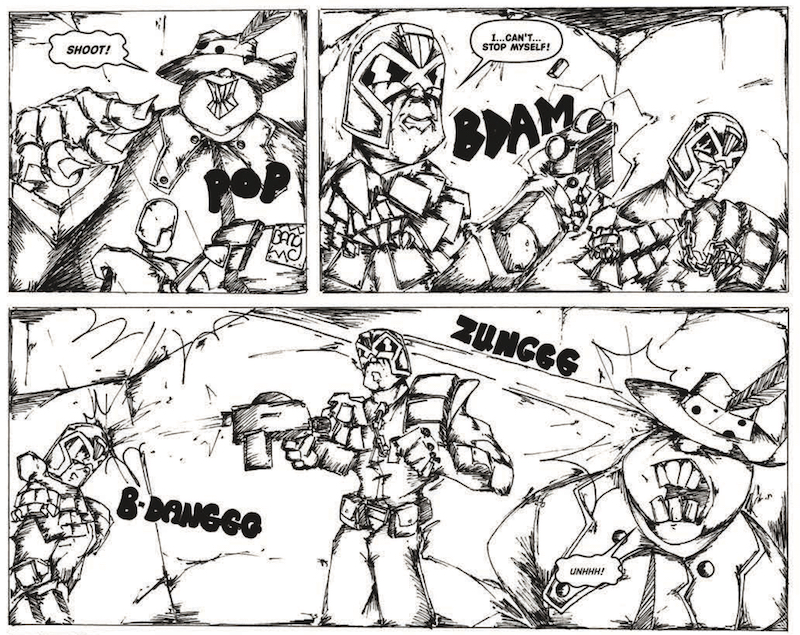 0:05:32-0:10:58: …Jeff managing to make me feel particularly bad for complaining about the art on one particular story, “Sugar Daddy,” by letting me know that the artist I’m criticizing is actually a competition winner in the age 6-12 group. So, yeah, I was unknowingly being a dick about a kid’s artwork. How quickly can I backtrack? How often will I bring it up again this episode through embarrassment? Just wait and see…! (None of this explains away the terrible lettering, which I also criticize.)

0:10:59-0:19:41: Attempting to try to steer things back onto the straight and narrow, we talk about the one story in the collection that we both loved without reservation: “House of Death,” as originally published in the 1980s short-lived anthology Dice Man. It’s a role playing game that we both played more than once, and get excited about sharing our experiences doing so; enjoy listening, because this is arguably the most fun we have all episode. Also touched upon: the format requirements of British comic annuals, back in the day, because why not…? 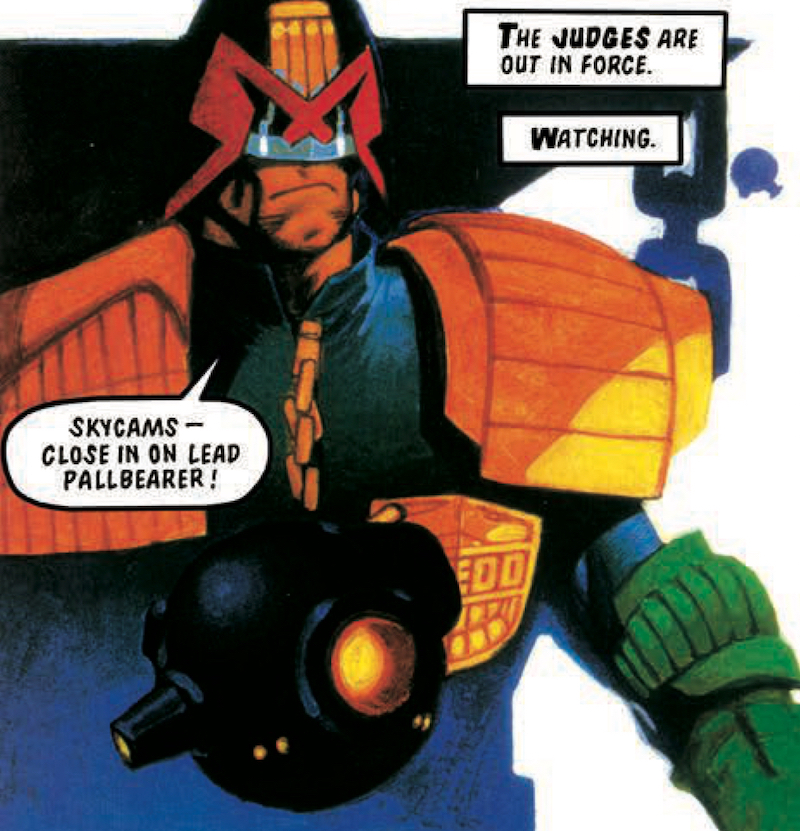 0:19:42-0:28:54: From there, we take a brief tour of John Wagner’s pretty underwhelming contributions to the volume, which are… fine, I guess? We talk about stories including “Could You Be Judge Dredd?” and “On The Job,” both of which are intended to act as introductions to the characters, as well as “Strangers on a Zoom,” and it’s odd page layout in its opening pages, and just how generally throwaway even the Wagner stories in this volume end up feeling — especially when it comes to the 2000 AD Poster Prog stories reprinted here. 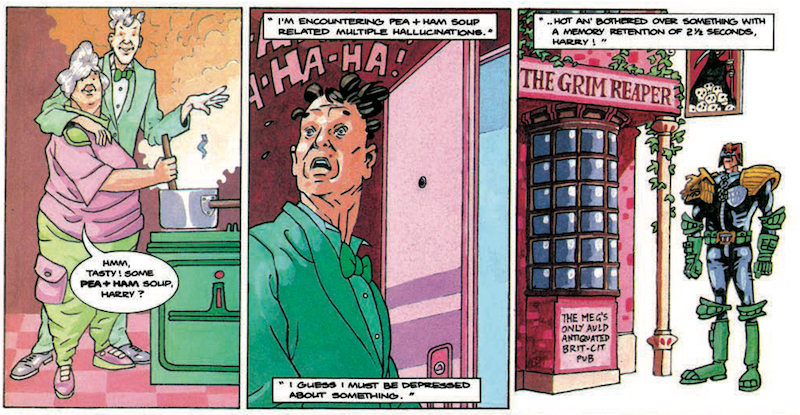 0:28:55-0:46:10: I wish there was an easier way to summarize this section beyond, “Jeff and I really don’t like almost every other story here and talk about that shared hatred in the most haphazard way imaginable,” but there we go. Under discussion: the odd editorial dictates that seem to have been put in place for some of the stories, the lack of actual story in “Judge Planet II,” and our complete confusion — and by “our,” I really mean ‘my” — when it comes to “Confessions of a Vegetarian,” a story that continues to confound me even now.

0:46:11-1:02:52: What starts with Jeff’s upset over the idea of crossing over Cliff Richard and the Golden Girls — and the briefest of discussions about the lack of inventiveness when it comes to using the cultural touchstones present in this collection, as parochial as they may be — quickly morphs into a conversation about completist tendencies and whether or not we should have even covered this book. How bad is it, you might ask? Well, Jeff invents a whole new third category when asked if it’s Drokk or Dross, which might answer your question, and then I think Jeff is talking about the movie It’s A Wonderful Life when he was clearly talking about A Christmas Carol, to the point where he even said the name. What can I say? This book had the effect on me that I couldn’t hear properly. That we end up calling it a failure of imagination of behalf of everyone involved might give you an idea about just how bad it really is, hopefully. 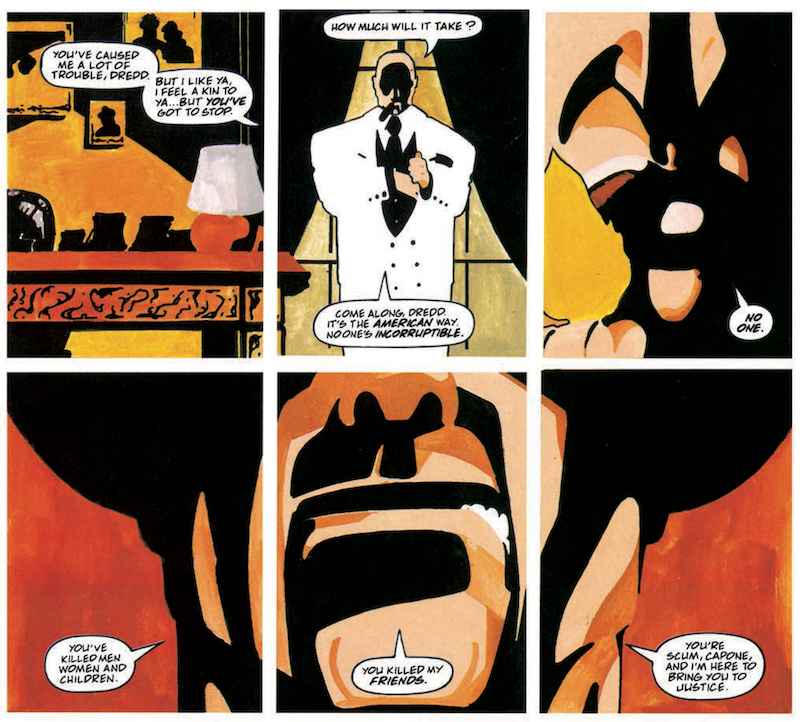 1:02:53-end: In which we wrap things up, and (as is the tradition) almost derail ourselves by talking about how the next episode features the last Case Files in the run, and how genuinely unexpected and emotional we find ourselves about that fact. Just imagine what we’re going to be like next month…! As always, thanks for listening to this short, and filled with complaining, episode, and for reading along.