0:01-19:26: Greetings!  No need to adjust your headset, the reason Graeme sounds a little different here is that he’s someone else ( or rather someone else as well)—yes, the talent Chloe Maveal joins your usual set of fools for this special April Fool’s episode!  No fake news stories here, not to worry, but Chloe, thank goodness, as a formidable comic critic and cultural editor was gracious enough to join us to change things up.  Not to worry though, this intro definitely has a Wait, What staple—us worrying about our tech set-up and how things will sound, and Jeff grumbling about work (although we hope to amusing ends in at least one of those cases). Also discussed: The best Leverage episode; The Italian Job; The Italian-er Job; Jay-Z’s Big Pimpin’;  and more!
19:26-50:52: Because we need to, ya know, talk about comic book like stuff eventually, we opt to discuss the recent news including: The Suicide Squad trailer(s), Space Jam: A New Legacy trailer, Marvel selling 300k+ copies of their Aliens comic; and then finally settling of the news of Marvel leaving Diamond for Penguin/Random House Publisher Services  (or PeRHaPS, as Jeff decides to call it to a confusing and annoying degree  in this episode). But fear not, gentle listener, of course we manage to discuss…Battle Pope?
50:52-1:02:05:  Jeff asks Chloe for her comic book origin story and it’s as delightful and as informative an answer as anyone could’ve hoped for.  (We all owe Uncle Tony a big round of thanks!).
1:02:05-1:03:08: Normally I splice together the two halves of our conversation a little more cleanly, but Graeme using his NPR Announcer voice (to announce that he’s doing his NPR Announcer voice, of course) was too good to cut out, conversational continuity be damned. 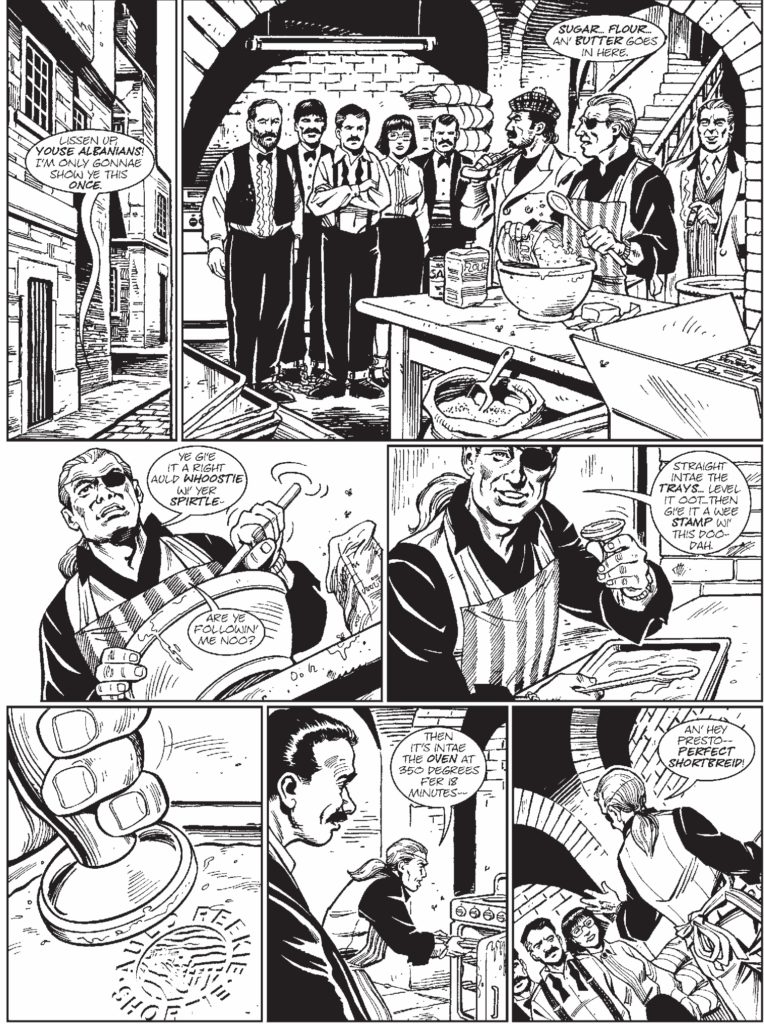 1:03:08-1:33:04: No, really, comics—all three of us really do read them even now!  In fact, we’ve all read the same comic:  Bogie Man: Return to Casablanca by John Wagner, Alan Grant, and Robin Smith!  If you feel left out because you haven ‘t don’t worry because (a) we all pretty much agree you’re not missing out, and (b) Jeff hasn’t read the first two installments in the Bogie Man saga, and Graeme & Chloe have.  But on the good news, both Graeme and Chloe are excellent summarizers so you to hear about what’s good, bad, and interesting about the original powerhouse team behind the first decade of Dredd (and Robin Smith!) tackling openly, ridiculously broad comedy!  Also discussed: Al’s Baby, Justice League International, Doomlord, and more (so much more!)

1:33:04-1:49:13: Graeme and Jeff had made a vow—a sacred oath, if you will—that they would watch Godzilla vs. Kong on HBOMax.  Graeme and Chloe did; Jeff unfortunately did not. Fortunately, Choe has plenty to say (and sing) and perhaps even more fortunately, we end up spending wayyyyyyyy more time talking about trashy reality show, Below Decks, than we do on GvK. 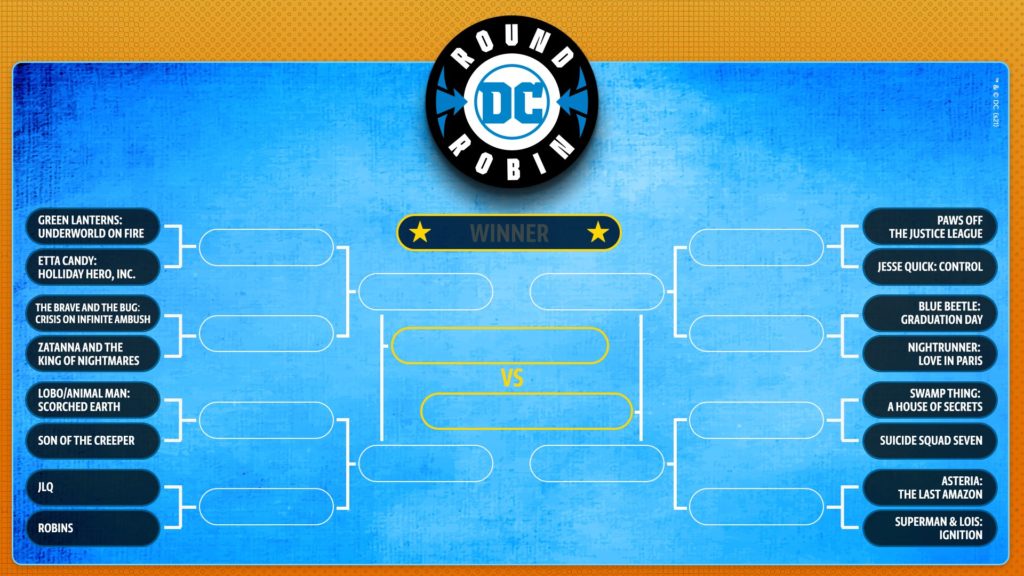 1:49:13-1:57:41: DC Universe Infinite is doing a Round Robin bracket where fans get to vote on pitches, the winner of which will become a  genuine series! Cynical? Inspired?  Has Jeff been following the Big Two for so long he can’t tell the difference anymore?  Find out here!
1:57:41-2:05:11: More DC/Warners news—their New Gods movie (by Ana DuVernay and Tom King) and The Trench—James Wan’s horror-infused spinoff from Aquaman—have both been put out to pasture.  Why? Who? What?  (I mean, why would you turn down a James Wan horror film, for God’s sake? That’s about as close to a money-in-the-bank guarantee as you’re going to get!) 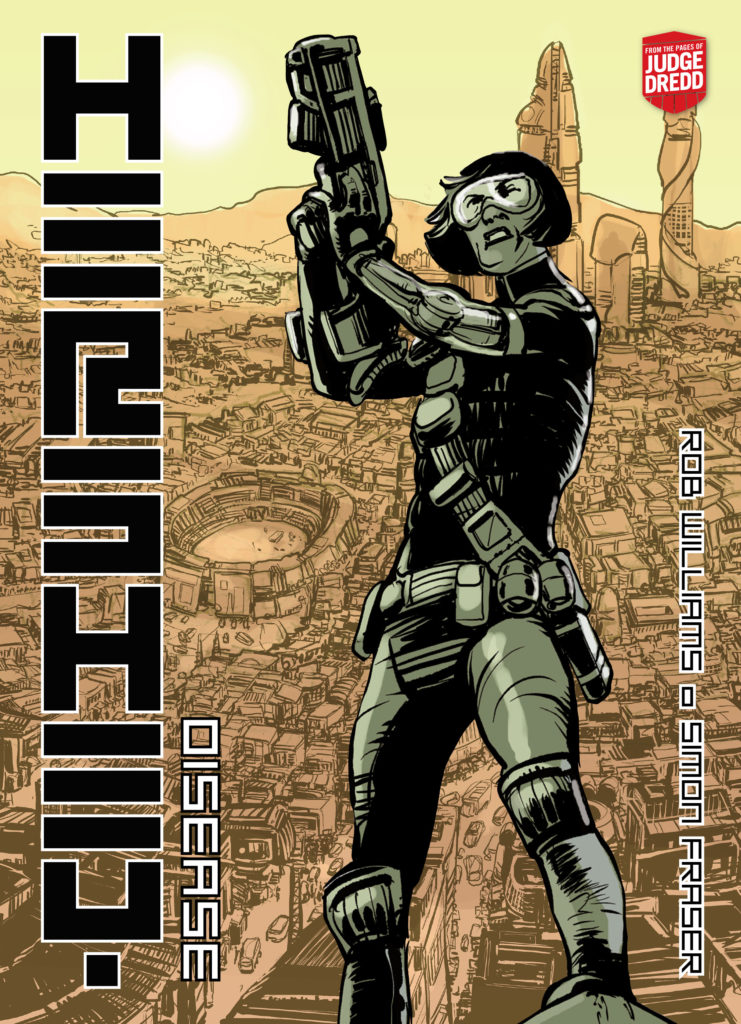 2:05:11-2:03:22: Any must-read books that came out?  We each take a turn talking about what ‘s recent we’ve been reading and liking.  For Graeme, that’s Hershey: Disease by Rob Williams and Simon Fraser (and this being Graeme, the resident podcast Time Lord, “recent” means “not officially released until 17 August, 2021”.  For Chloe, “recent” means “a few years ago” as she’s been reading and really enjoying Rob Williams’ recent run on Suicide Squad (art initially by Jim Lee and then by a procession of artists).  Jeff spoils the Rob Williams trifecta but at least arguably has a better sense of the term “recent” by talking about Beta Ray Bill #1 written and illustrated by Daniel Warren Johnson. (I didn’t mention it in the podcast, but here’s the longer version of the interview between Johnson and the mighty Walt Simonson that ran at the back of that issue).
2:03:22-end:  Closing Comments!    Oh, but fortunately some things never change:  look for us on  Stitcher! Itunes! Instagram! Twitter together and separately: Graeme and Jeff (and Chloe)! Tumblr, and  on Patreon where a wonderful group of people make this all possible, including Empress Audrey, Queen of the Galaxy, to whom we are especially grateful for her continuing support of this podcast.
Next week: Time to Drokk!  Read Judge Dredd: The Complete Case Files, Volume 24 and drokkin’ join us here next week!