Previously on Drokk!: John Wagner has been joined by his long-term writing partner Alan Grant, as the world of Mega-City One comes ever more defined by the episode. We’ve survived the Cursed Earth, the Day The Law Died and even the Judge Child Quest. But can anyone survive… the Apocalypse War…?

0:00:00-0:01:37: We jump into the episode in a remarkably quick fashion, so eager are we to discuss Judge Dredd: The Complete Case Files Vol. 5, which covers material from 2000 AD Prog’s 208 through 270 — which is to say, far more than a year’s worth of material. Which makes it all the more surprising that the quality in this book is so high. A note on the podcast as a whole I’ll sneak in here: We’re so in our own heads that we never actually give the full names of the writers of the entire book; it’s John Wagner and Alan Grant, co-writing each episode. I mean, we’ve talked about them before in earlier episodes, so chances are everyone already knows, but yet.

0:01:38-0:09:35: We just right into things by talking about how strong the book is as a whole, with almost no filler, and even the stories we think might be filler are particularly strong. The whole thing, I argue, reads like one larger narrative about the fragility of the block system (and, arguably, Mega-City One as a whole). We talk about that, as well as the dark humor especially present in this volume, and the ways in which Judge Dredd (the strip) uses continuity differently from other comics. 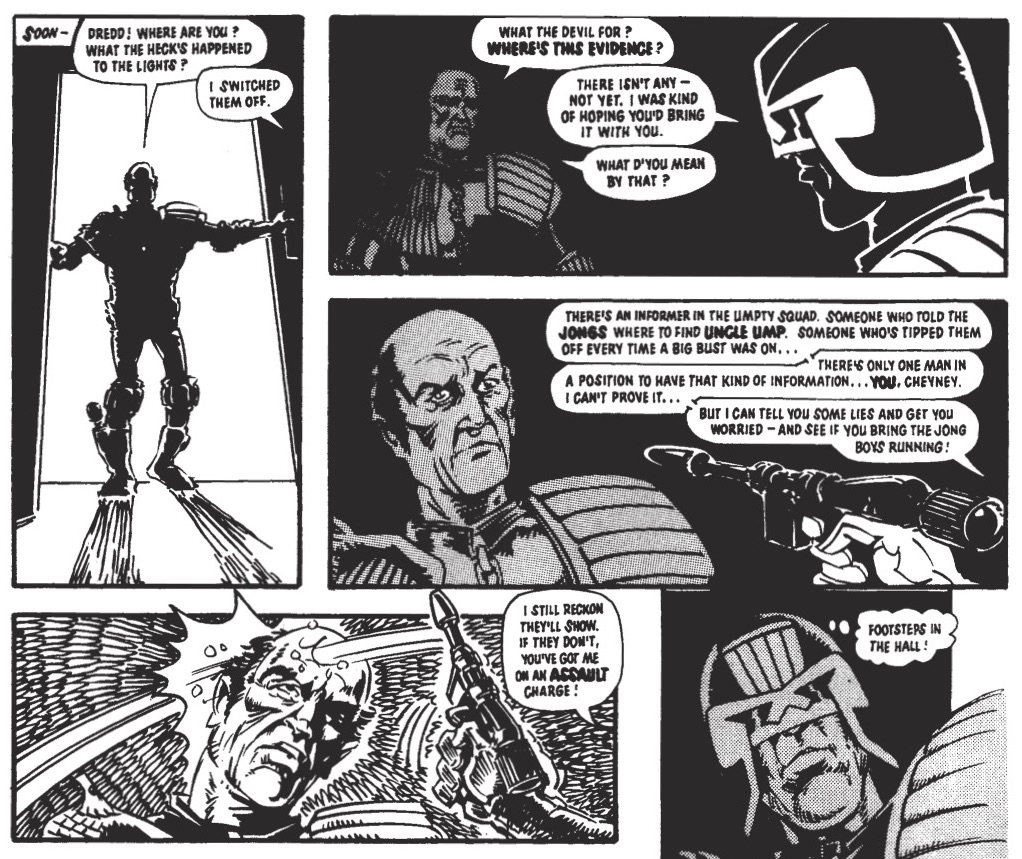 0:09:36-0:23:30: Is this volume so strong because Wagner and Grant have found the perfect balance between world building and storytelling? That’s something I suggest, while we also talk about the two writers — and, specifically, their work in this volume — as being an unrecognized inspiration for a lot of subsequent British writers. Also, is the work in this book a response to 2000 AD’s then-contemporary interest in the concept of “future war,” and how would “The Apocalypse War” storyline stand up against fellow 2000 AD icon Pat Mills’ Invasion strip?

0:23:21-0:31:49: Intentionally or otherwise, Vol. 5 is very clearly a book of two halves, with the first half managing to create an atmosphere and understanding in the reader’s mind that supports the final “Block Mania” and “Apocalypse War” storylines. We discuss how organic this feels as a reader, while Jeff points out something that I’d missed: The first half of the book also contains a storyline which is, in many ways, the overarching structure of this volume in miniature. 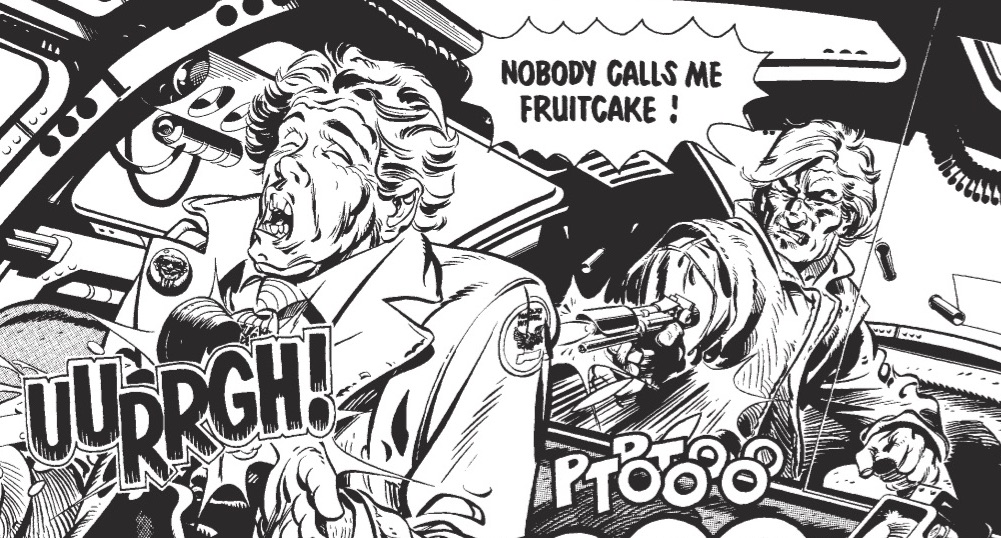 0:31:50-0:39:10: We take a brief detour to talk about one of the so-called filler stories, which nonetheless proved to be surprisingly chilling to both Jeff and myself. Can a story about a man with a gun read “innocently” any more; when it first was published almost 40 years ago — and in the UK, where gun violence is far more rare — was it as removed from reality as the other, more outrageous, strips that surrounds it? 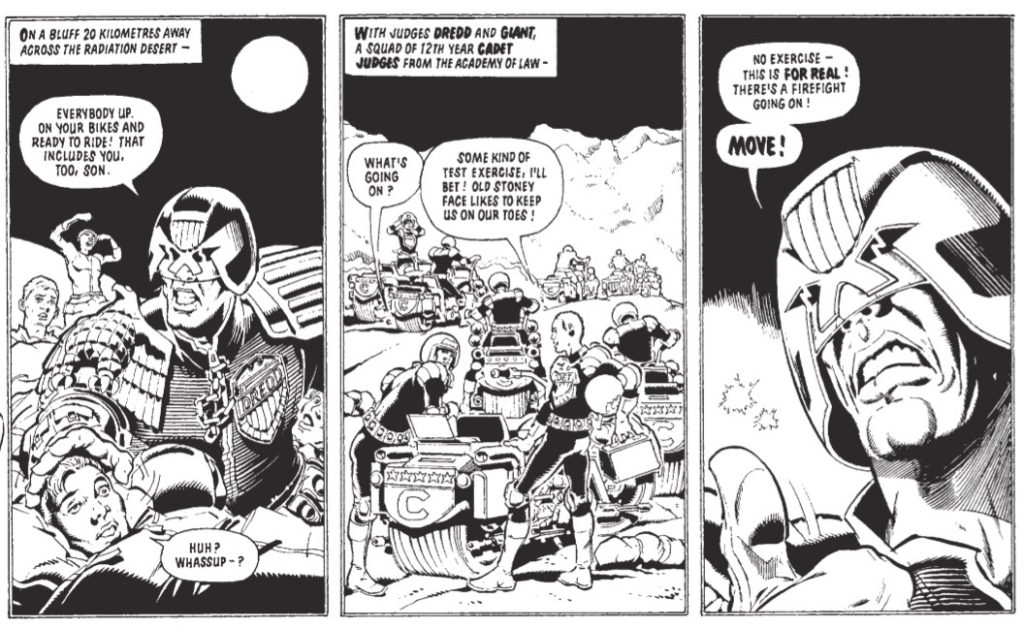 0:39:11-0:50:01: If the book is, as I argue, actually two books, then it’s impressive that the “lesser” of the two is still some of the best Dredd there is. Jeff and I talk about our love for “The Hotdog Run,” a three-parter that precedes “Block Mania” and “The Apocalypse War,” as well as touching on something that’s important and somewhat new about this volume’s strips: The suggestion that the Judges are, in fact, far more fallible than they’d previously been portrayed — something that is necessary for what’s to come. 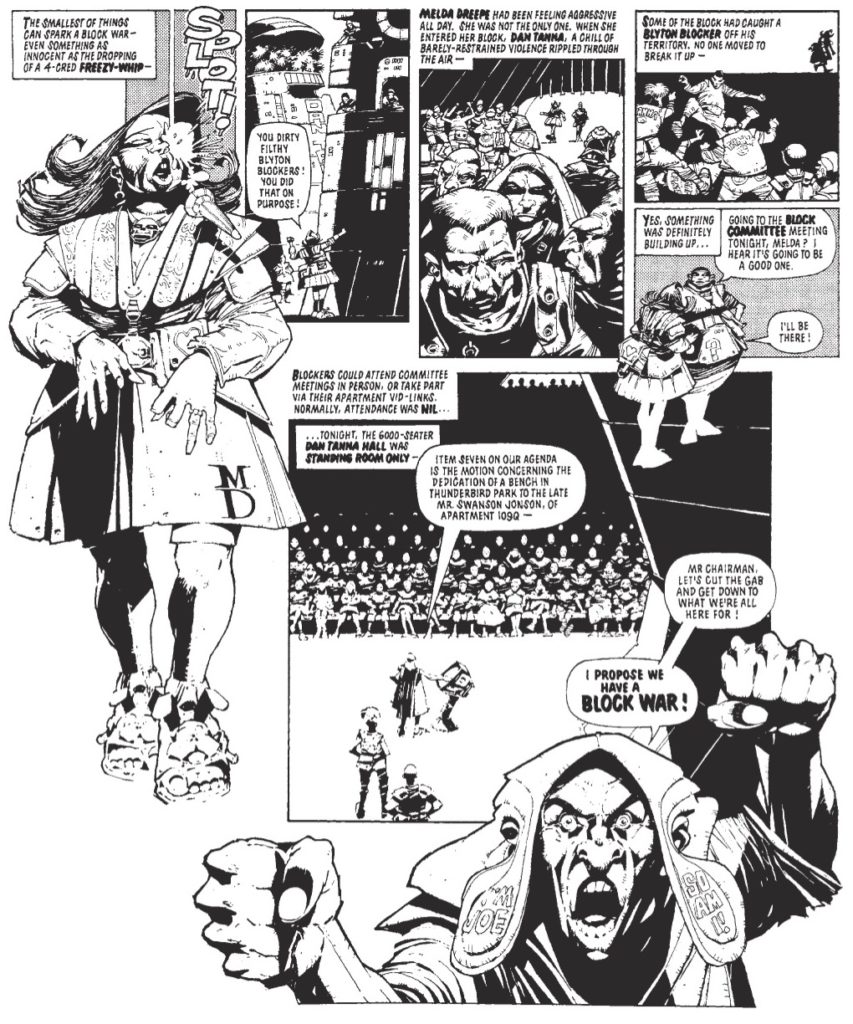 0:50:02-0:58:05: Another detour of sorts, as the artists in the volume come up for discussion. We bid farewell to both Mike McMahon and Brian Bolland with this volume, both of whom go out on top — that McMahon art in particular is amazing — while Colin Wilson arrives with some art that suggests that Bolland’s influence will remain in this strip for quite some time. Even inside the mind of Ron Smith, who isn’t otherwise a particularly Bolland-esque artist, portrayals of Dredd aside.

0:58:06-1:04:04: If Joe Dredd is the eponymous lead of the strip, Jeff argues that Mega-City One is the primary co-star, which is why what happens to the city in this volume is so impactful; Wagner and Grant essentially manage to convince readers that the big co-star is going to get killed.

1:04:05-1:15:12: We finally arrive at the “Block Mania”/“Apocalypse War” cycle — which lasts 34 issues, all told, and is one massive story that pretends otherwise. There’s a quick plot synopsis, and then we’re into talking about how bold a piece of storytelling it is, and how it continually wrongfoots the reader in a genuinely impressive manner, continually outpacing expectations. As Jeff argues, it not only lives up to the hype that surrounds the storyline, it transcends it. (Bold, I know, but really; this is entirely earned praise.)

1:15:13-1:27:41: As bleak as it is — and “The Apocalypse War,” especially, is one of the most bleak storylines in all of Dredd, if taken literally — there’s something surprisingly entertaining and enjoyable about these two storylines. Is it simply that we’re ready for anything, even scenes of Walter the Wobot and racist stereotype housekeeper Maria, to break the existential horror of what is happening elsewhere? We also discuss the names of the various city blocks that show up in “Block Mania,” and what might be the most unlikely-to-be-picked-up-by-the-kid-demographic reference in Dredd yet.

1:27:42-1:34:33: Let’s take a moment to appreciate just how staggeringly good the art is throughout the 25-part “Apocalypse War,” with Carlos Ezquerra returning to the strip for the first time in five years to draw the entire thing. Jeff describes his take on Dredd and the world of the strip as “understated iconic,” and that feels entirely appropriate. There’s discussion of his style, of an amazing method of differentiating a flashback scene from the “present day,” and of the ways in which Ezquerra was like Jack Kirby. 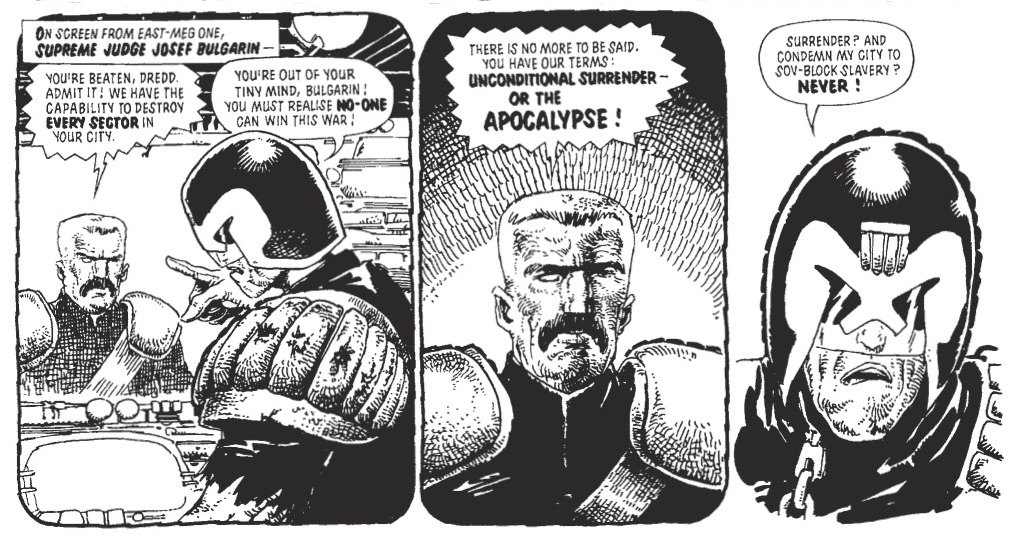 1:34:34-1:49:28: This leads onto a conversation about Ezquerra’s past drawing war comics for the UK, which turns into a discussion about the influence of British war comics — which John Wagner had also worked on, of course — on this particular strip. I make the suggestion that, for the length of “The Apocalypse War,” the strip actually stops Judge Dredd as we know it, even as the storyline makes the most explicit argument for Dredd being a broken, damaged, dangerous man instead of a hero. Jeff runs with this, and points out the criticism of Dredd present in the story’s conclusion, which implicitly recasts the entire storyline as Dredd’s fault in an entirely new way. 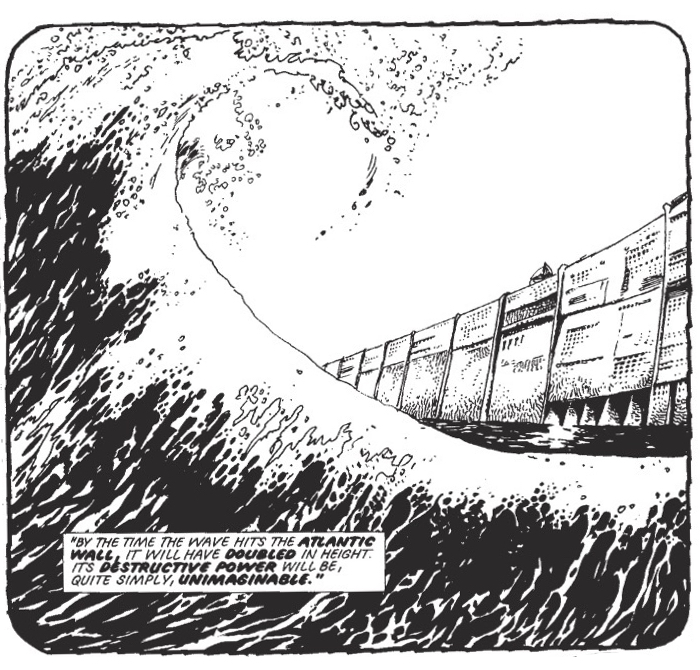 1:49:29-1:59:02: Dredd is actually missing for significant chunks of “The Apocalypse War,” and we talk about the strip growing past him for this particular storyline. Also discussed: Carlos Ezquerra’s fine art inspiration for one particular panel, and the fact that I read this while watching HBO’s Chernobyl, which made for some strange parallels. (Something not mentioned in the podcast, but consider this an extra: I wondered how much influence the iconic British anti-nuclear war TV drama Threads had on “The Apocalypse War,” and the answer is none; it came out afterwards.) 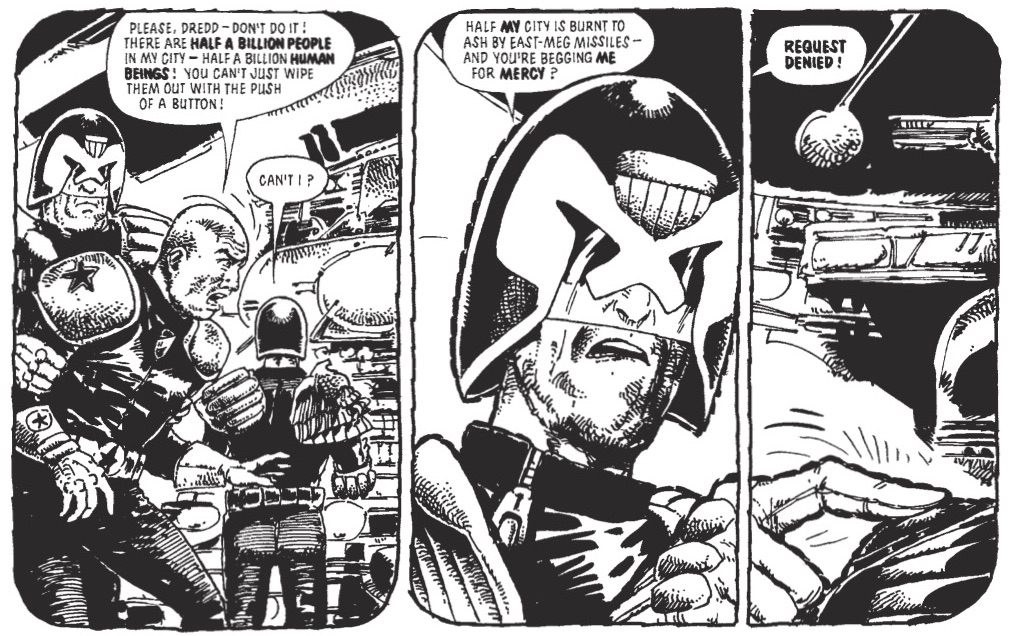 1:59:03-2:03:42: As we start to wrap things up, Jeff answers the traditional question: Would this be a good place to start reading Dredd? Despite having compared “The Apocalypse War” to Watchmen, he argues against it, thinking that the book requires the build-up offered by earlier volumes; I also think it’s not the best idea, but mostly because “The Apocalypse War” would utterly skew new reader expectations of what Judge Dredd actually is, as a longform narrative and give false expectations of future volumes.

2:03:43-end: We finally head towards the exit sign by talking ever-so-briefly about the fact that this is actually the 400th episode of Wait, What?, as we close out of month of 10th anniversary programming. (Thank you, everyone, for listening, for however much of that decade you’ve been there for.) Then, as ever, we talk about our Instagram, Tumblr, Twitter and Patreon accounts, and Jeff sings us out. Happy Apocalypse, everyone…!