Previously on Drokk!: As we’ve reached the early 1990s, we’ve said goodbye to Garth Ennis and hello to the next generation of Judge Dredd writers in 2000 AD — including none other than a very young Mark Millar. Thankfully, over in the Magazine, John Wagner has returned to save us all. 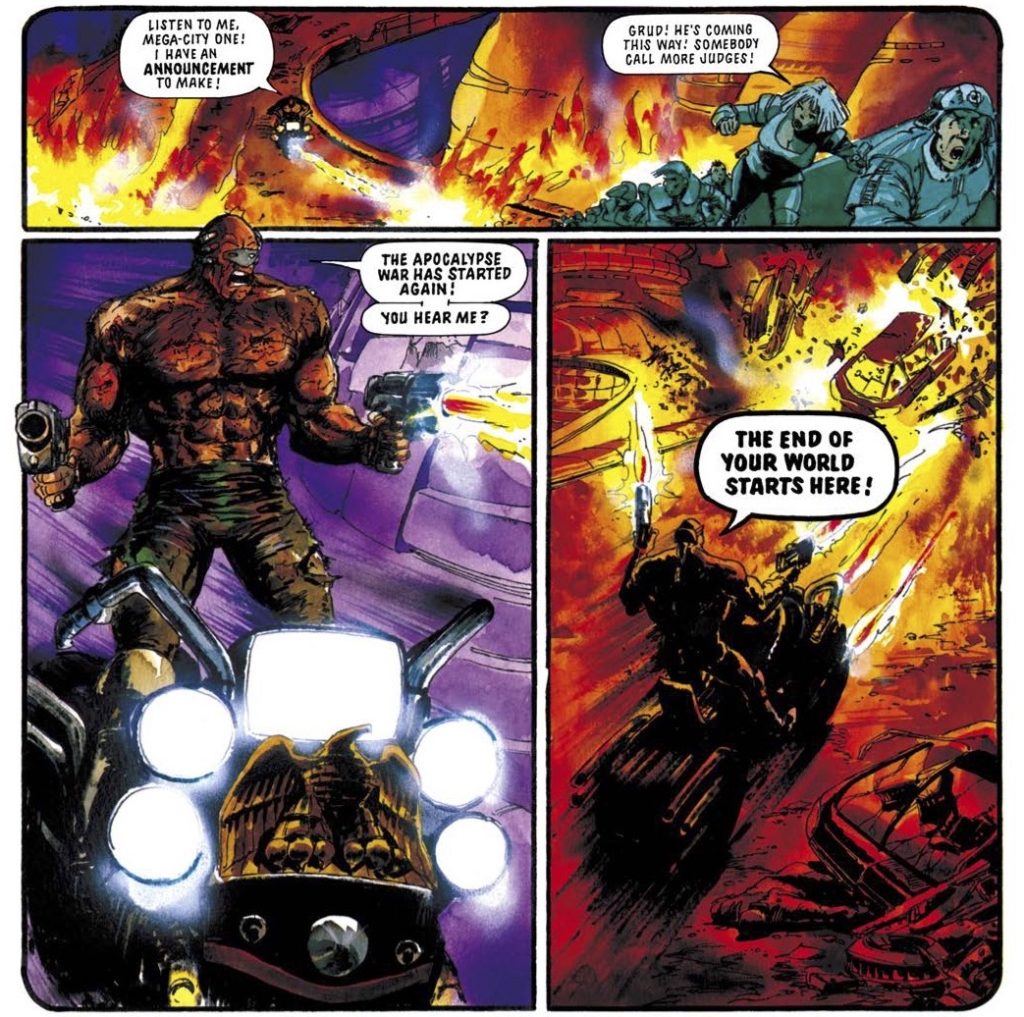 0:00:00-0:03:30: We introduce ourselves and admit our lack of fondness for at least half of the book we’re covering in this episode, Judge Dredd: The Complete Case Files Vol. 20, which covers material from 1993 and 1994’s 2000 AD and Judge Dredd: The Megazine issues. It’s… not exactly a high point, at least where the 2000 AD episodes are concerned.

0:03:31-0:07:03: Before we get to just how shockingly, appallingly bad the majority of the 2000 AD episodes are this time around, we talk about the one 2000 AD story in the book that we enjoyed: “Roadkill,” written by John Smith, who has turned out to be a bright spot amongst a dark time for 2000 AD writers. 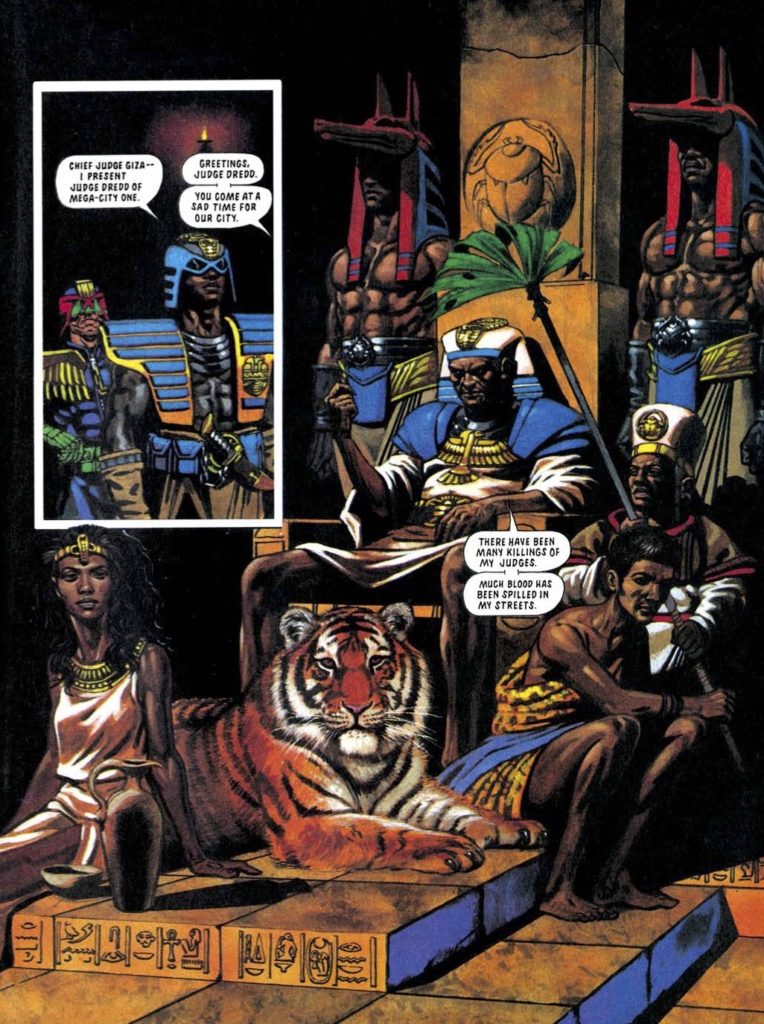 0:07:04-0:44:12: Why is the 2000 AD material so bad this time around? The answer might be found in Jeff’s description of the book as “the most consistently racist volume” in the series to date, with so many of the 2000 AD stories being racist in a variety of ways, each of them genuinely breathtaking in something published so relatively recently. We talk about that, and also the fact that both of us feel as if the 2000 AD material is skewing younger than it has before, even when 2000 AD was officially a “kids’ comic.” Is that because the stories are more simplistic in format and execution, that they revolve around high concept hooks, or that there’s an absence of the ambiguity and complexity that Wagner and Grant brought to the strip in their heyday? Also under discussion: the ways in which Millar (and Grant Morrison, who co-writes one of the serials in this collection) imagine threats to Dredd, and how flawed their understanding of structure and pacing is when it comes to the longer storylines. And just who Sonny Steelgrave, and why is he terrible? 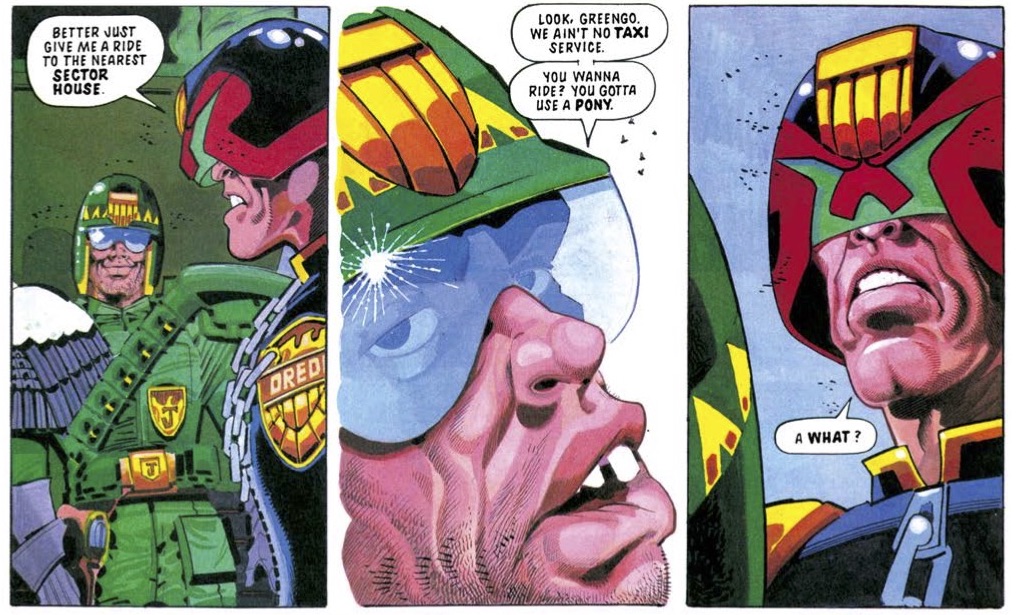 0:44:13-0:50:00: It’s not just Mark Millar who’s disappointing in the 2000 AD stories in this book, and we talk about whether or not they’re at least more interesting than the Garth Ennis era of Dredd stories. (We differ on this, I think.) “The first half [of this volume] was genuinely excruciating,” Jeff says, and he’s not wrong about that. 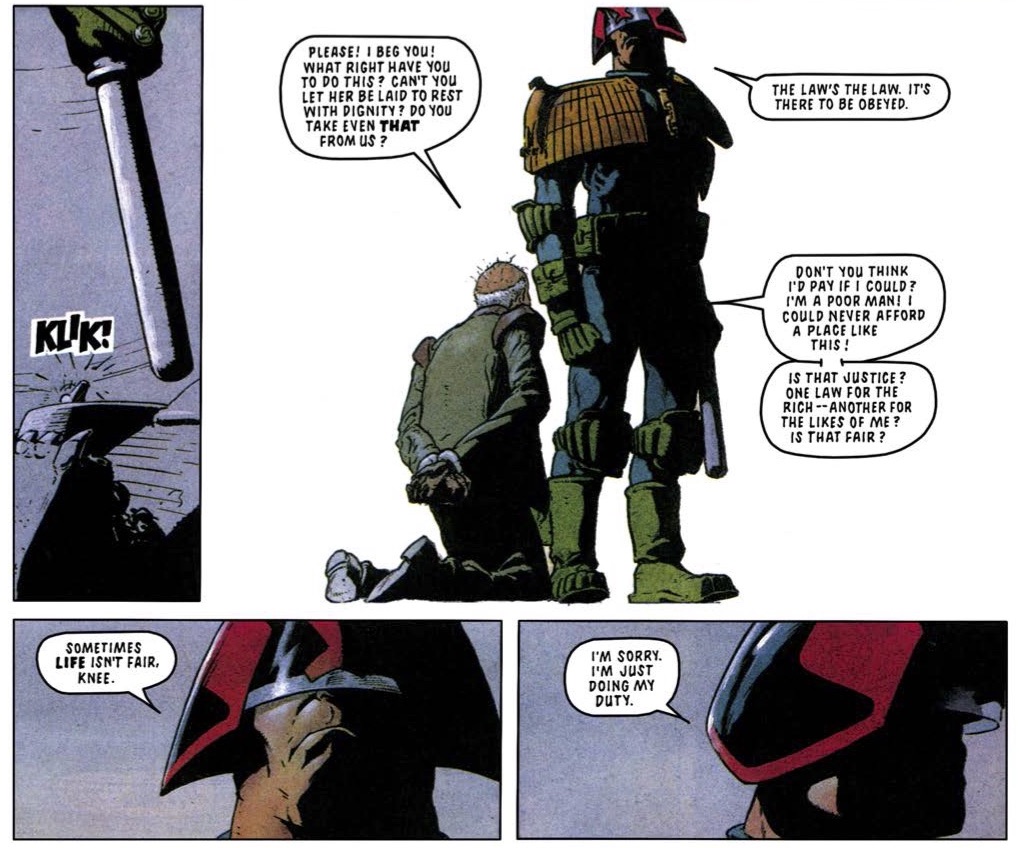 0:50:01-1:08:19: All isn’t lost, however, and the Magazine stories in this collection turn out to be pretty uniformly good — with one exception that we talk about briefly — thanks to John Wagner having a really strong period around this time. The first of three truly great Wagner stories in this book, “Bury My Knee At Wounded Heart,” is the first to draw our attention, and it brings us to talk about Dredd’s unusual display of moral cowardice, the wonderful staging of the scene by Peter Doherty, and what it means for Dredd to experience shame for perhaps the first time in the character’s history. We also do a quick rundown of all the Magazine stories in this volume, and Jeff explains why “Do The Wrong Thing” flubs what could have been an important response to the racism as displayed in the 2000 AD stories this time out. 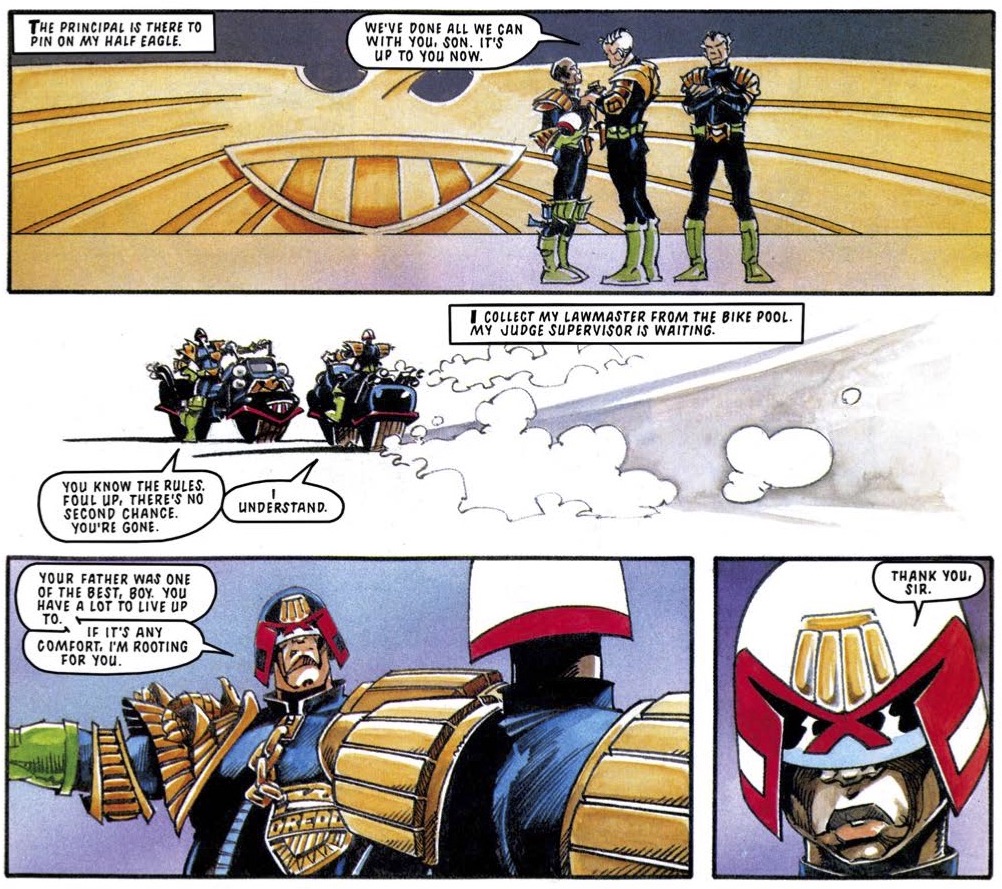 1:08:20-1:25:10: The second great Wagner story is “Giant,” and we talk about the ways in which it stacks up against similar stories in the strip’s past — and there have been a bunch — while also quietly building on them, and displaying a potential shift in the way that Wagner is thinking about not only the way the Justice Department runs, but also the way that it should run, with this story offering a couple of wonderfully subtle criticisms of the status quo to underscore just how unsubtle Dredd has been in recent years. 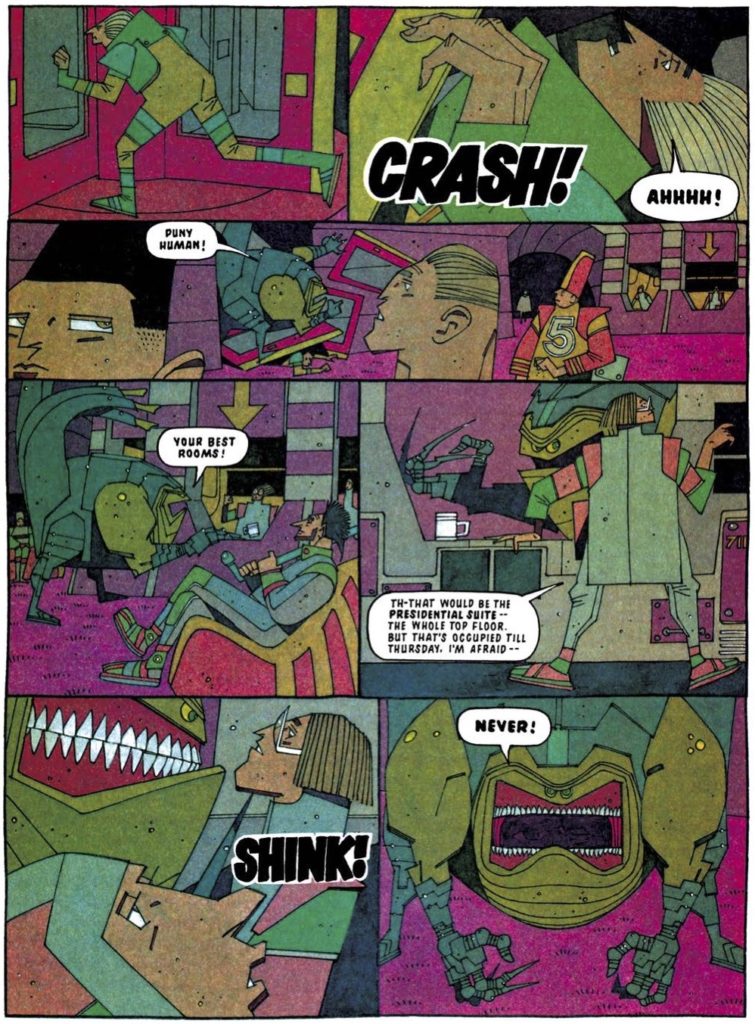 1:25:11-1:41:08: Perhaps the most amazing, unexpected strip of the entire volume is saved for last, with Wagner and Mick McMahon’s “Howler” being unlike anything else in the history of the Dredd strip, and all the better for it. We talk about the “weird performance art” aspect of it, but really, I should just share images, because that says it all. 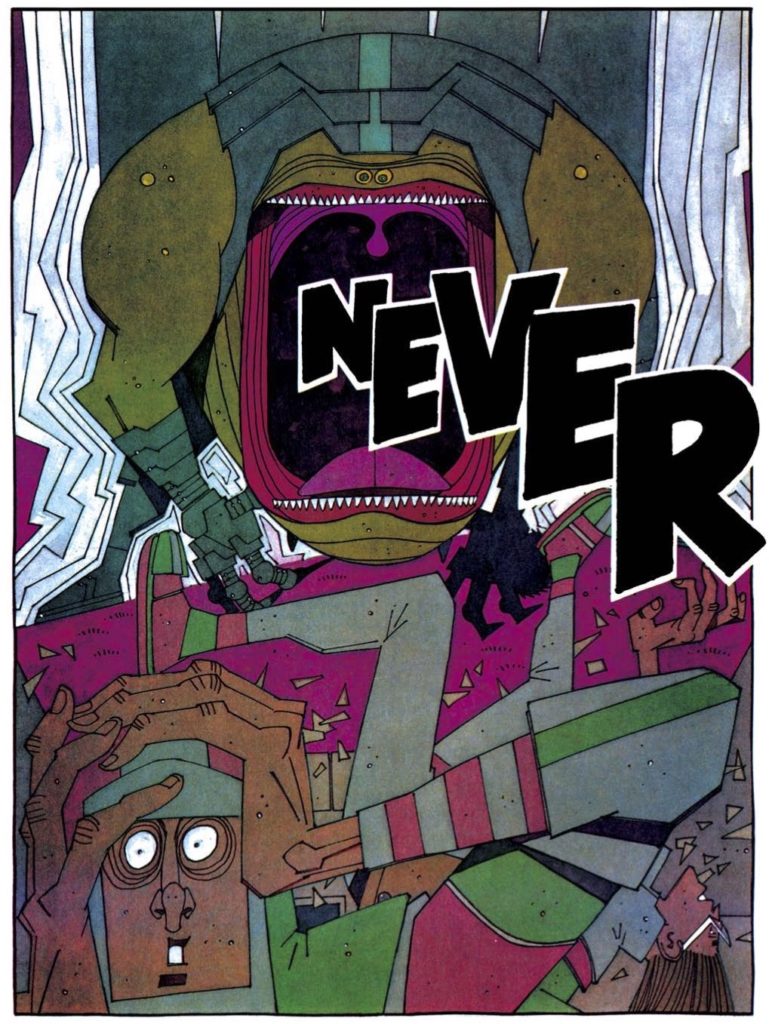 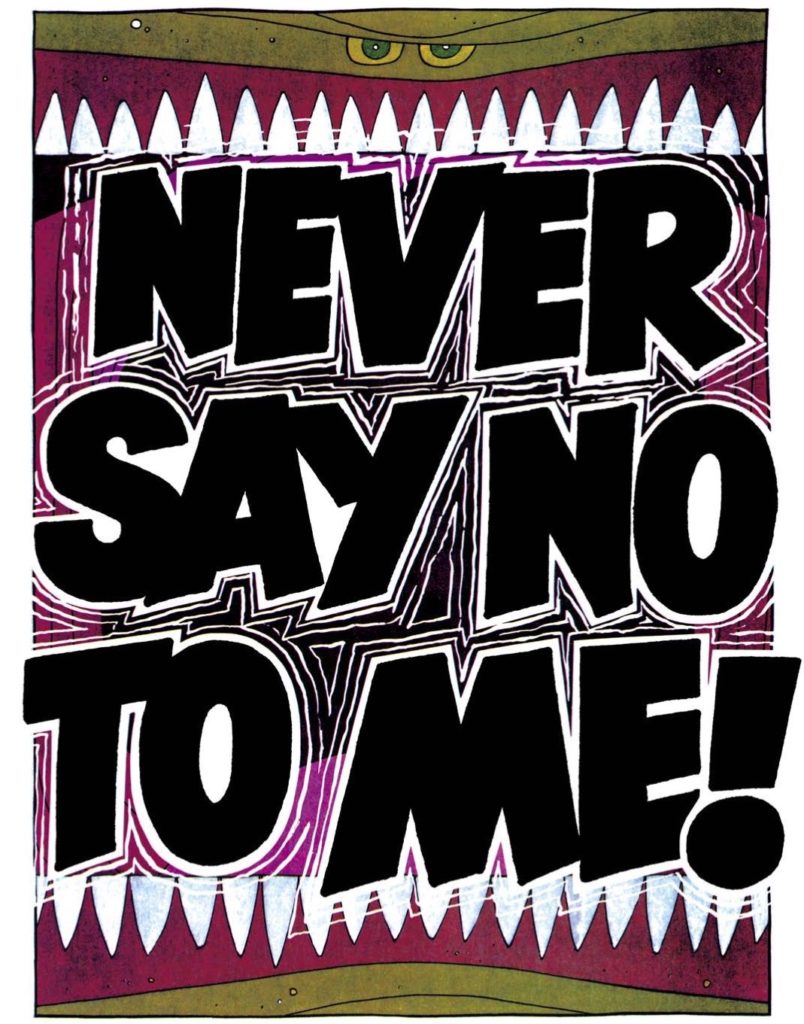 1:41:09-end: Is this volume Drokk or Dross? It’s a surprisingly close run thing, but not nearly as close is our choice of favorite Wagner and non-Wagner strips in the volume. From there, we close things up by talking briefly about what’s to come, and then wrapping things up with the traditional mention of our Tumblr, Instagram, Twitter, and Patreon accounts, and that’s it for 2020’s Drokk!s. As ever, thank you for reading and listening along; you’re all the greatest, even when the stories are not.