Previously on Drokk!: As we got tired by the ongoing reign of Garth Ennis on the 2000 AD episodes of the Dredd strip, two things in the previous episode pointed towards the future: John Wagner’s return to the series in the pages of the Judge Dredd Megazine, and a one-off 2000 AD story written by none other than a very young Mark Millar… 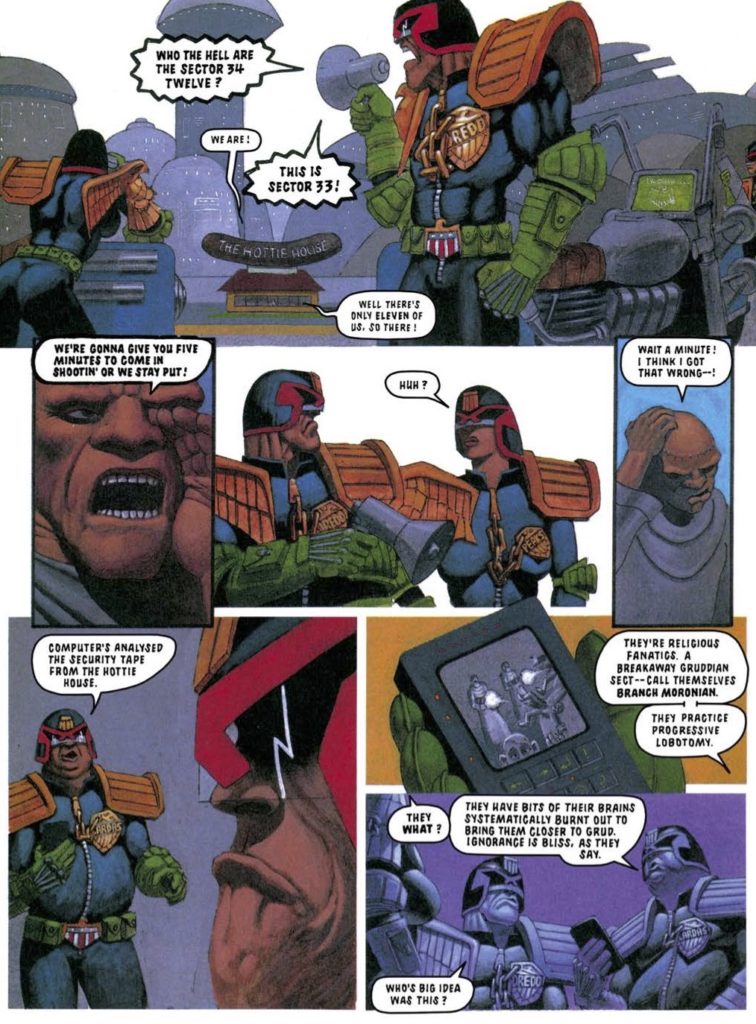 0:00:00-0:02:21: A brief-enough introduction lets everyone know that we’re reading Judge Dredd: The Complete Case Files Vol. 19, which collects material from 2000 AD and Judge Dredd Magazine — or, as it was called at the time, Judge Dredd: The Megazine — from 1993, written by Ennis, Wagner, Millar… and Grant Morrison, whose 12-part “Inferno” serial dominates both this volume and our discussion thereof. 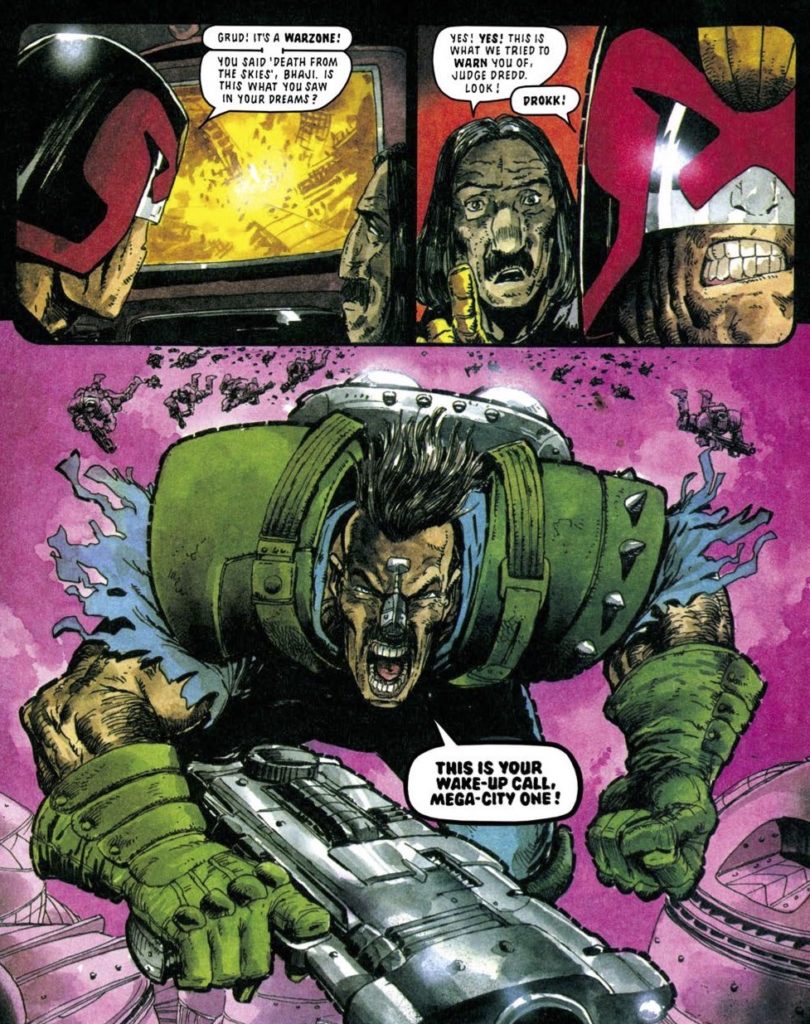 0:02:22-0:50:44: What looks as if it’s going to be a discussion of Mark Millar’s surprisingly strong contribution to the collection gets detoured into a lengthy discussion of “Inferno,” via the fact that Millar wrote a (not-collected-here) prologue series for 2000 AD called Purgatory. I compare that, perhaps unfairly, to DC’s Countdown to Final Crisis, and talk about Millar’s tendency towards nastiness, and then we end up talking all over “Inferno” properly, and what Grant Morrison gets right — the high concept at the heart of the story — and wrong, with the latter being, basically, “the execution of that high concept.” 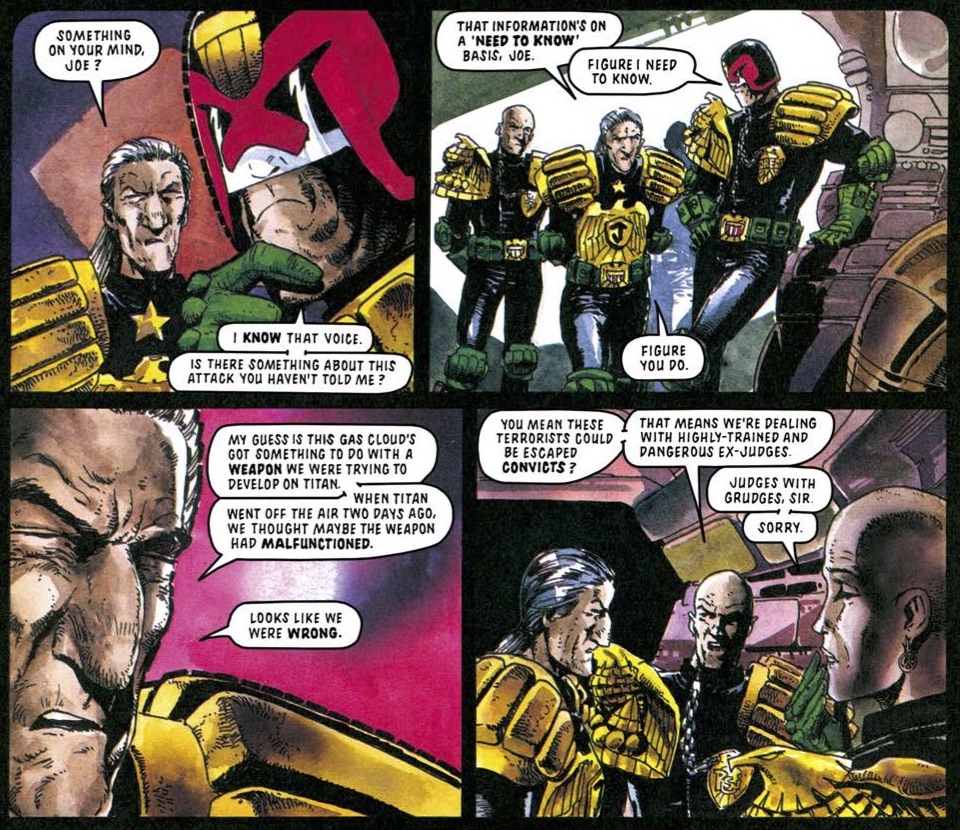 Jeff makes the argument that “Inferno” is Morrison using the story as a calling card for writing Dredd in the future, and we discuss the ways in which it works and doesn’t — the emptiness, the odd pacing and seeming disinterest in engaging with Dredd in any ways beyond the surface quips and violence, transforming it into a summer blockbuster movie… which it actually works relatively well as. Despite that, there’s an accidental lesson to be learned from the whole thing, when it comes to the Judges self-policing and the limits of their attempts to clean up their own messes. All this, and I also explain 2000 AD’s 1993 temporary relaunch the Summer Offensive!

0:50:45-1:06:32: With Morrison out the way, we approach Garth Ennis’ last work (for awhile) on the series and bemoan just how bad it is — at least he was consistently off, I guess…? — and talk about how surprised I am to enjoy Millar’s contributions as writer, as unsubtle as they may be. Under discussion: Is British newspaper the Daily Star an unexpected influence on Millar’s Dredd? Can Morrison and Millar write more entertaining Dredds because they’re not necessarily fans of the character or the strip? And, really, just how bad is Ennis’ last contribution, which seems to be entirely based around how much he didn’t like early 1990s late night show The Word?

1:06:33-1:17:36: The unsung hero of Case Files 19 is, undoubtedly, John Smith, and as we move onto the Megazine material, Jeff and I marvel at how well he manages to “get” what John Wagner has done with the strip in a way that no-one else with the exception of Alan Grant has really managed — and, in the process, come up with the math for an ideal Dredd story: “Smart + Funny + Cruel.” Also discussed: John Smith’s love of the overwritten caption and the strange way in which Wagner will, eventually, follow Smith’s lead in that respect. (Kind of; Wagner doesn’t do “overwritten.”) 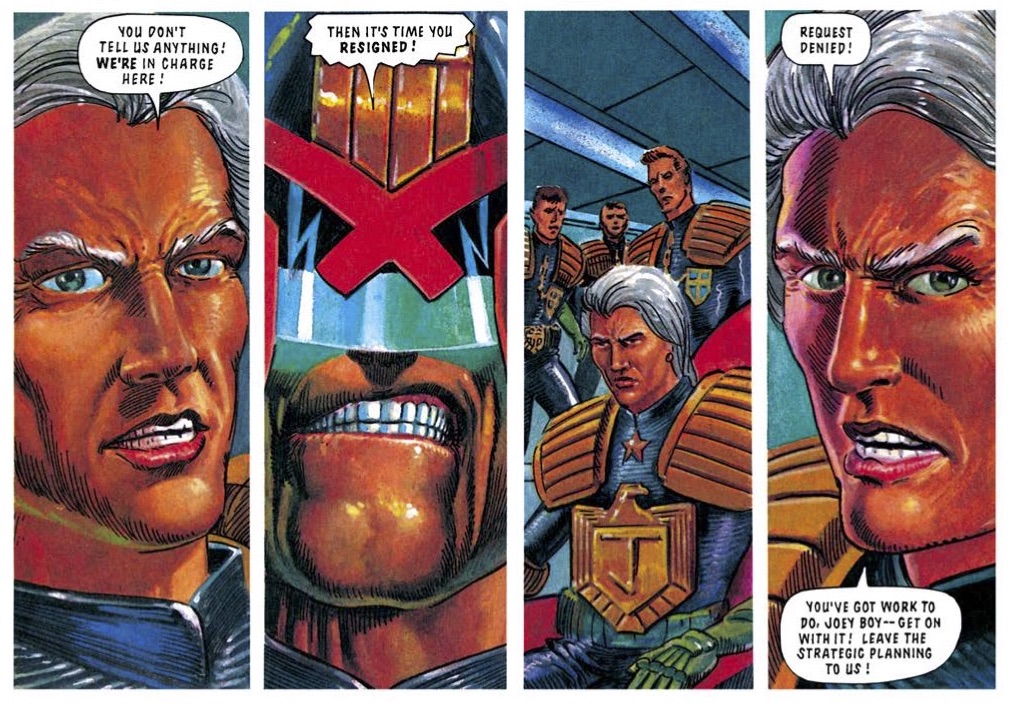 1:17:37-1:52:19: And so, to the Wagner material in Case Files 19, which includes our joint favorite story in the book, “Hottie House Siege” — a one-off so silly that we take a second to appreciate how much we enjoy Wagner’s stupid stories. (As opposed to his more serious stories.) An all-too-brief (in retrospect) mention of the Return of Slick Dickens leads us onto discussion of the third “Mechanismo” story, which is actually a discussion about how abruptly a character relationship shifts, and whether or not this is a problem of a character being shared between writers — and whether Dredd, by this point 16 years old as a strip, has started to encounter the problem that all long-running comic strips do, when audiences have to start picking and choosing their own head canons for the character. We also find out that Jeff is nostalgic for Case Files 10 and that era of Dredd, but really, after three volumes of Garth Ennis, who isn’t…? 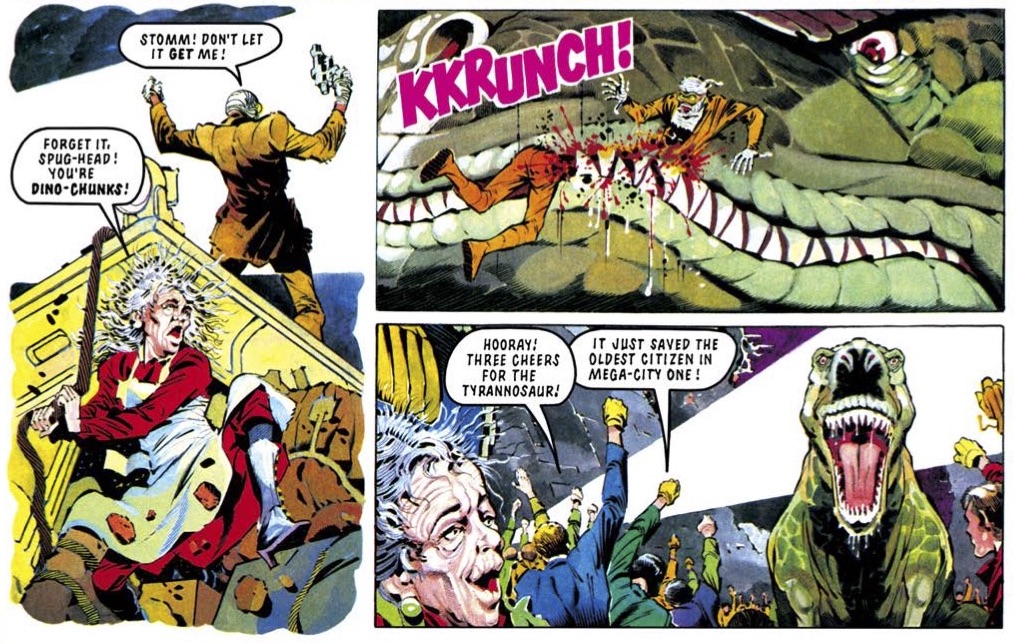 1:52:20-1:58:24: All told, is this volume Drokk or Dross? The answer might surprise you — it certainly surprised me — and we pick our favorite and least favorite stories from the volume: Good news for John Wagner, slightly less good if you’re Garth Ennis or Mark Millar. (Surprisingly, Grant Morrison skids through without getting near either category.) 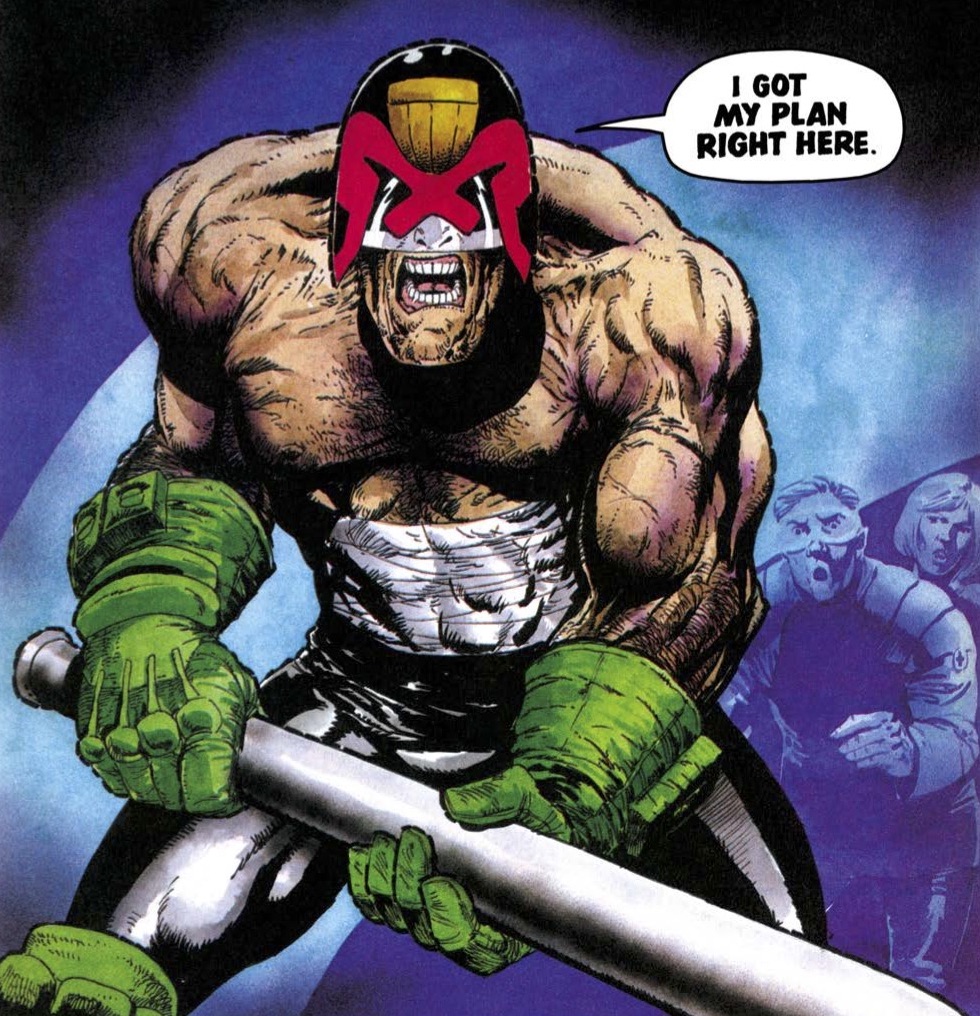 1:58:25-end: As I tease the fact that we’re skipping out on regular Dredd for the next episode — we’ll be covering Judge Dredd: The Restricted Files Vol. 3 — we sign off in our regular fashion, by mentioning Tumblr, Twitter, Instagram, and Patreon. For those who’ve been reading and listening along, bless your collective cotton socks, as ever.