Previously on Drokk!: Sure, Garth Ennis might be a well respected comics writer for work on titles including Preacher, Punisher, and Some Guy and A Gun or Something these days, but did you know that, when starting out, he wrote some really poor Judge Dredds? Because we sure do after the last couple of episodes. 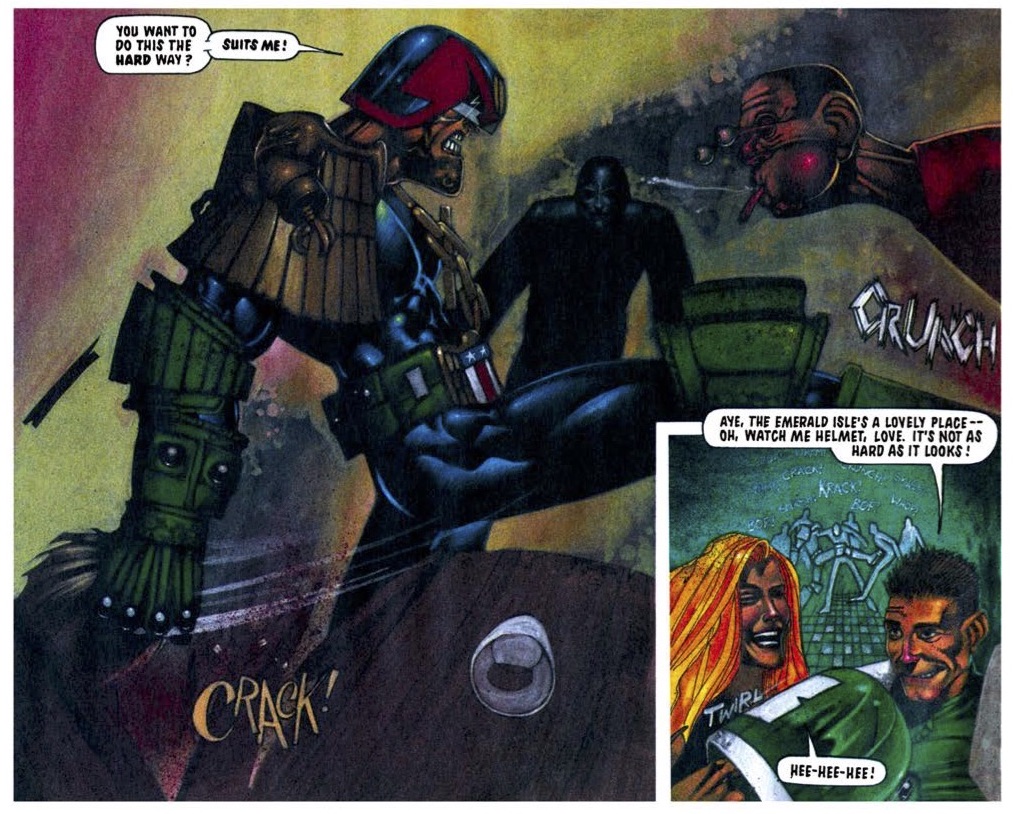 0:00:00-0:02:32: Before diving into what is, ultimately, an uneven book — but one that’s far better than we’ve enjoyed in recent episodes! — we introduce ourselves, and the fact that we’re reading Judge Dredd: The Complete Case Files Vol. 18 this episode, featuring stories from 2000 AD and Judge Dredd Magazine from 1992 and 1993. Yes, there’s more Ennis, but there’s also more John Wagner than we’ve had for awhile, too, so… yay…? 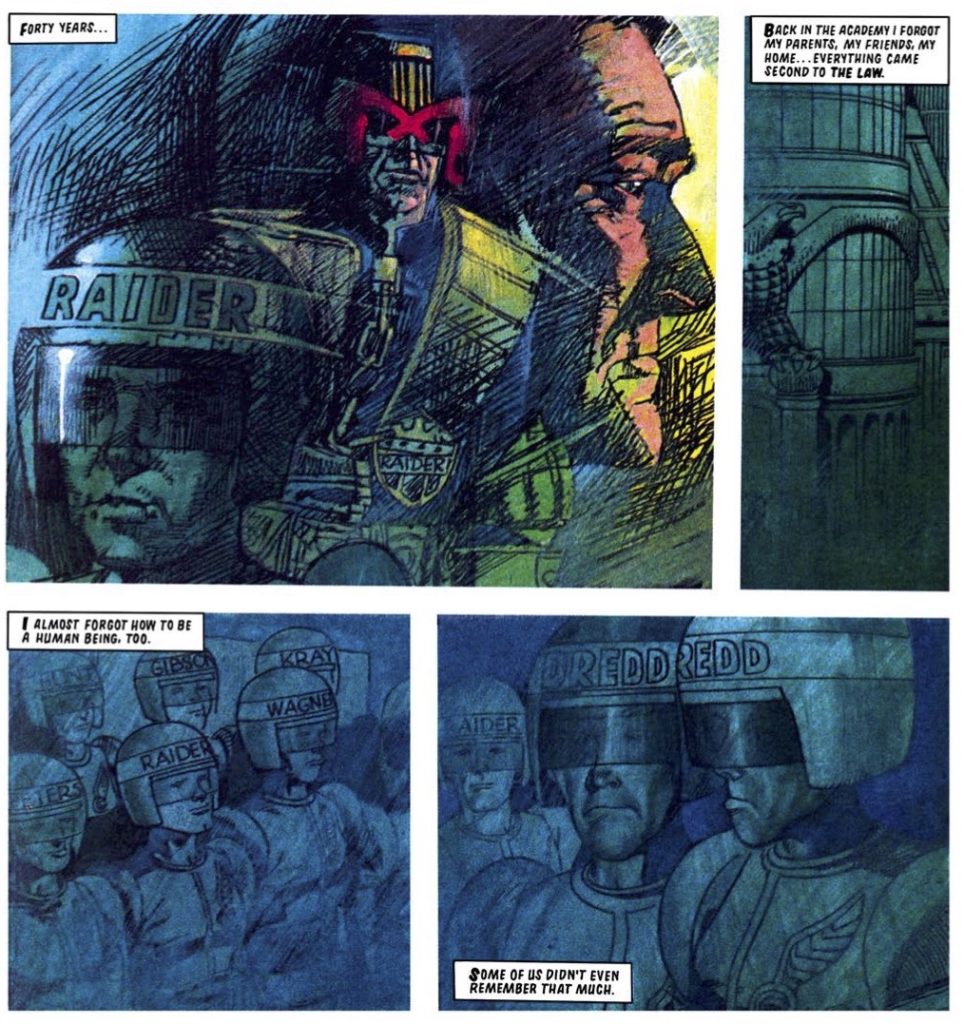 0:02:33-0:34:59: As is our tradition, we immediately dive into the Garth Ennis material, because apparently we hate ourselves. Ennis writes all but one of the 2000 AD episodes in this volume, and we discuss the way in which these stories have all of his bad Dredd habits and then some, and Jeff floats a theory that, perhaps, editors were trying to position 2000 AD’s Dredd stories for the audience that was buying not-for-kids comedy comic Viz at the time. (I’m not convinced.) Also discussed: Mark Millar’s first Dredd story (it’s not good) and what it might owe to Pat Mills, whether or not Ennis has grown at all in how he approaches Dredd as a strip, and just why Garth Ennis’ sense of humor doesn’t really work in this strip, at least in this incarnation. 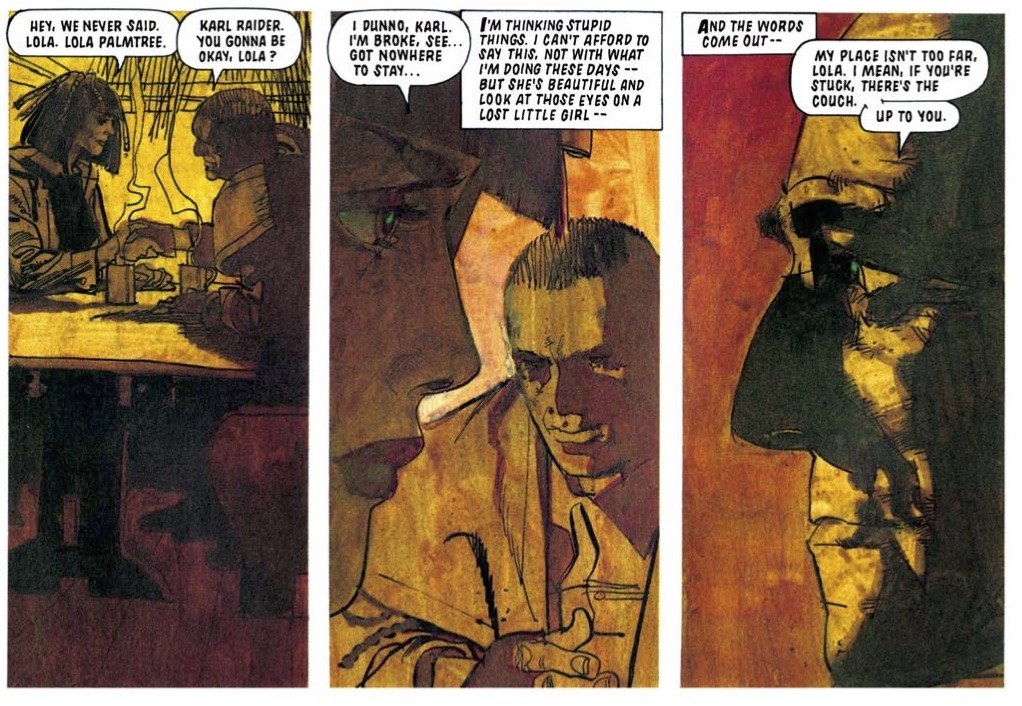 0:35:00-0:59:38: We’ve talked about Ennis’ seeming sympathies for the more fascistic parts of the Dredd mythos in episodes past, and we’re back at it now after Jeff talks about Ennis’ tendency to be a bully when it comes to the targets of his comedy. Is Ennis pathologically afraid of weakness, and if so, how does that factor into his support for might-makes-right as an ideology? We also talk about two storylines in which Ennis is at his most Ennis-y: “Raider,” in which someone is almost as hard as Dredd, but isn’t, and Ennis’ only P.J. Maybe story, in which he… utterly misunderstands the entire point and appeal of the P.J. Maybe character. Things are grim, Whatnauts. 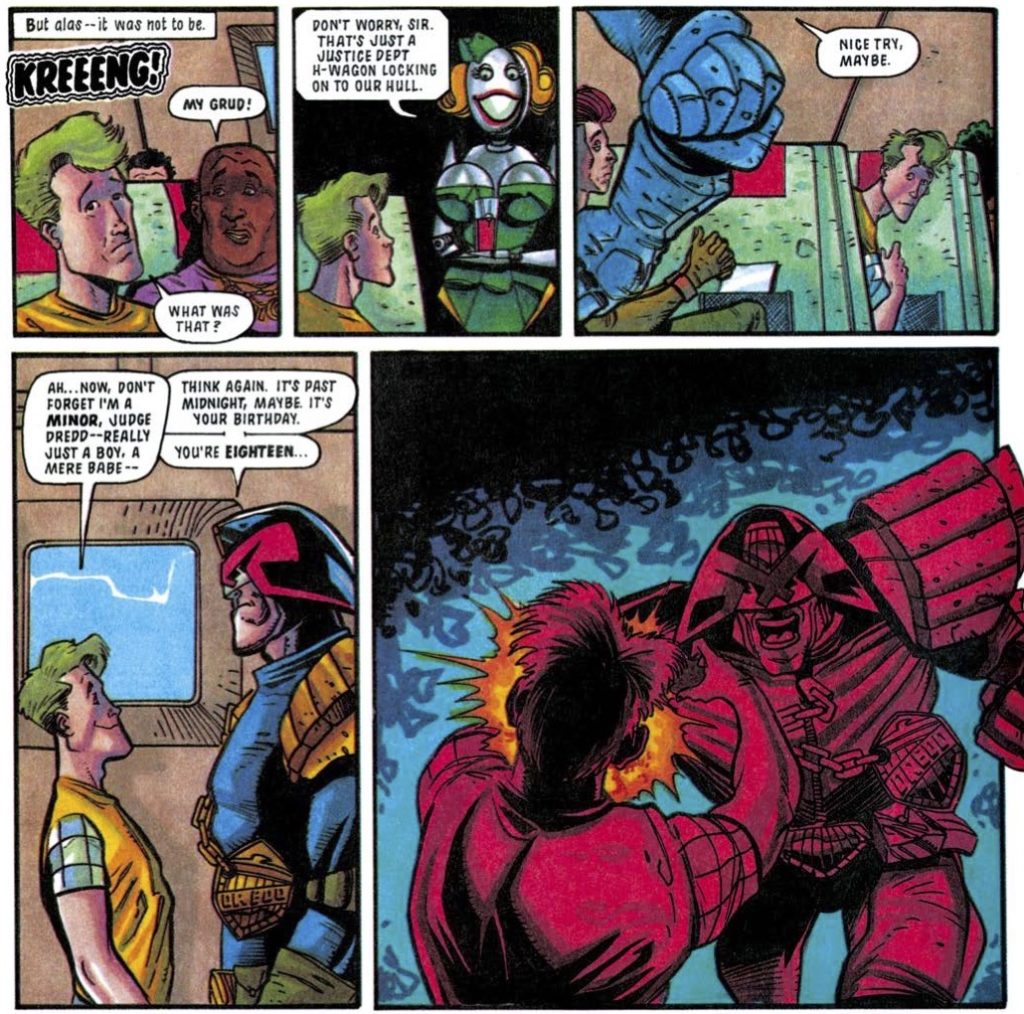 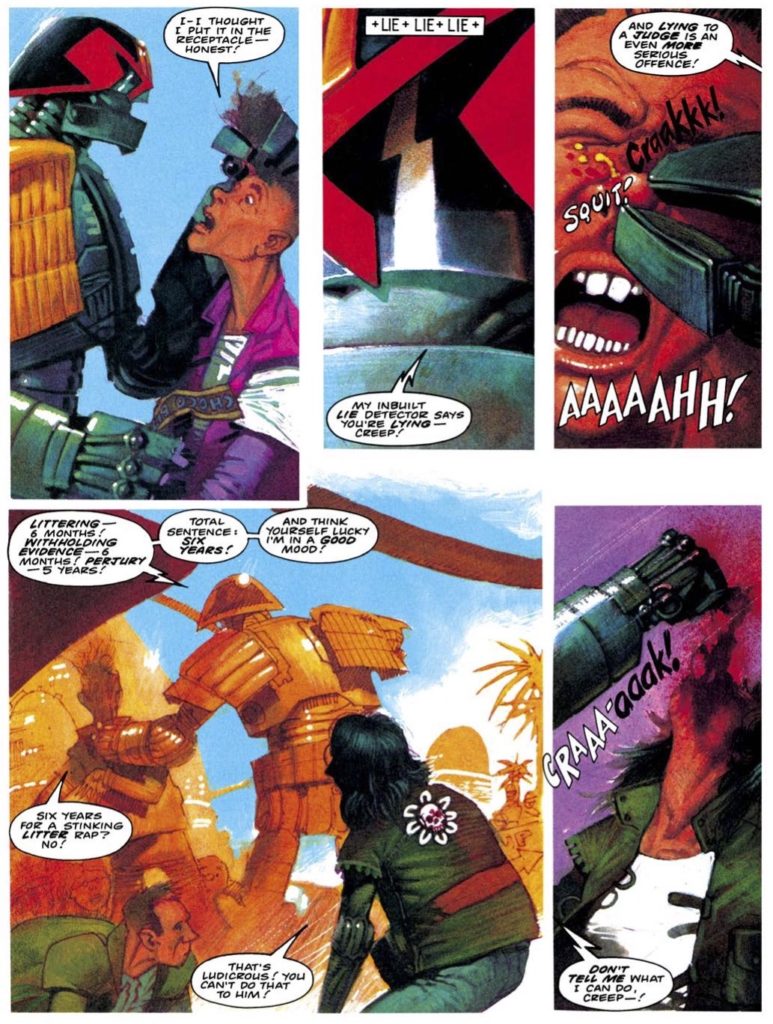 1:01:23-1:22:52: Onto the good stuff, as we get to the Magazine material, and “Mechanismo,” in which John Wagner asks the important questions: “What is policing without a human element?” and “What if I did a story based on that question but also referenced Robocop and Short Circuit, because they’re about robots?” Jeff also brings up good points about what the Mechanismo robots say about policing in 2020, and the ways in which John Wagner and George Romero have similar approaches to long form storytelling. No, really! 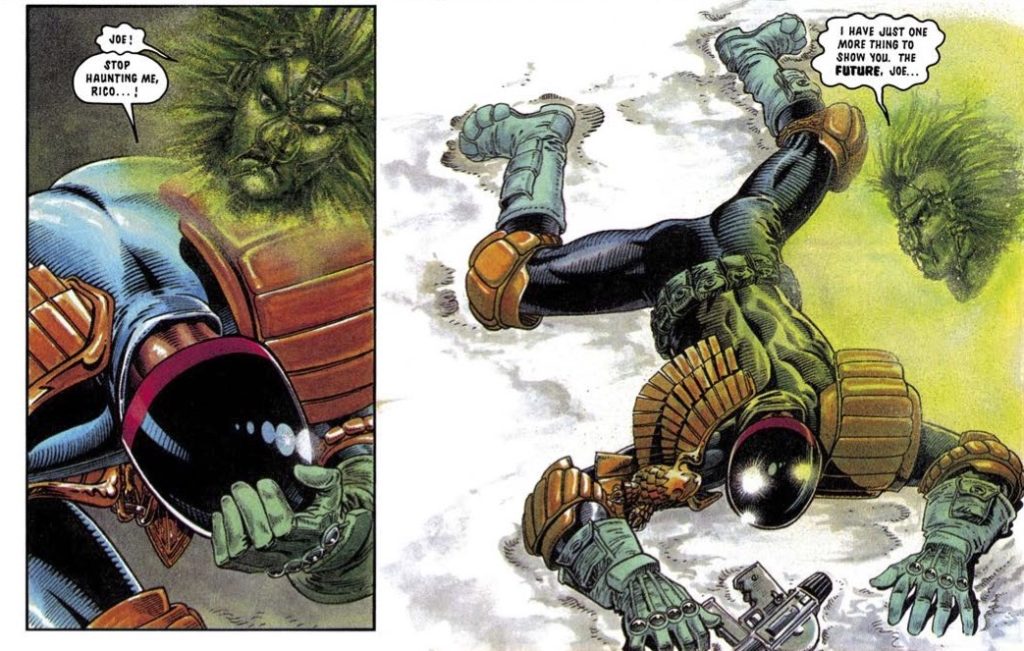 1:22:53-1:34:51: It’s not all “Mechanismo,” though, and Jeff raves about “A Christmas Carol” — both Dickens parody and statement of intent on Dredd’s place in the world by John Wagner, as it turns out — while we’re both confused and slightly non-plussed by John Hicklenton’s artwork on another of the strips. I’ll be honest, we pretty much shortchange the Alan Grant material in Case Files 18, but I think there’s also an argument to be made that we’re giving it exactly as much attention as it deserves. (Sorry, Alan.) 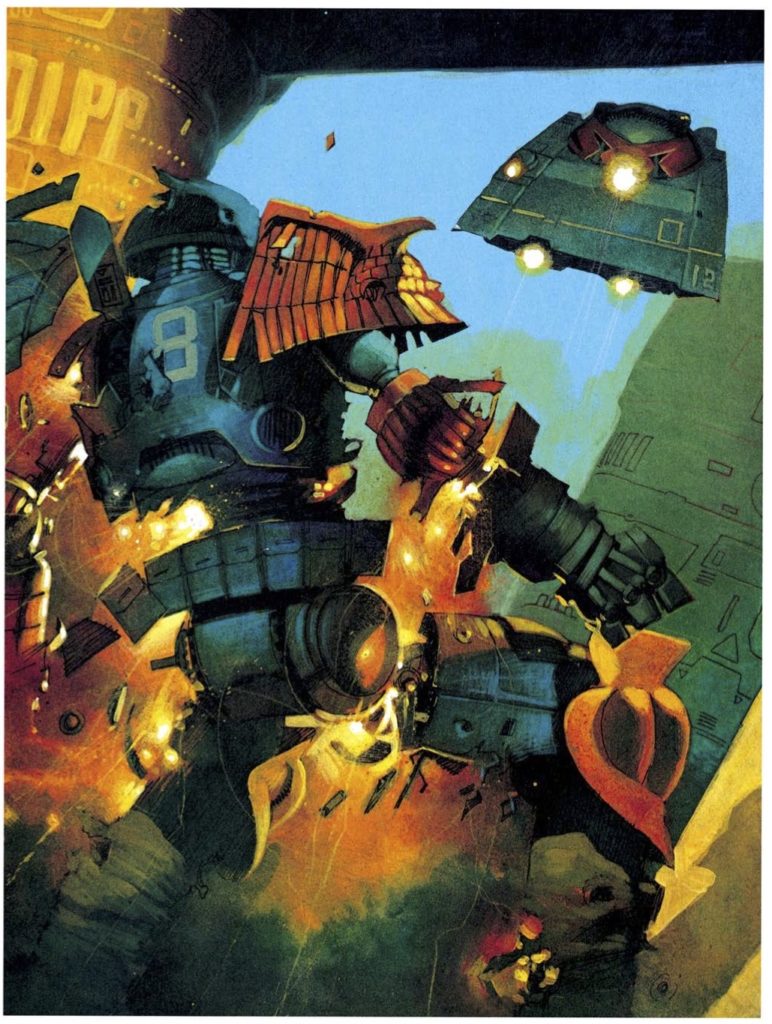 1:34:52-1:45:07: We start to wrap things up by looking back at the Magazine material as a whole in this volume, and then Case Files 18 in its entirety. Which is my favorite of the two “Mechanismo” stories in this book? Is the book Drokk or Dross overall? What are our favorite stories in the book? The answers can be found within! 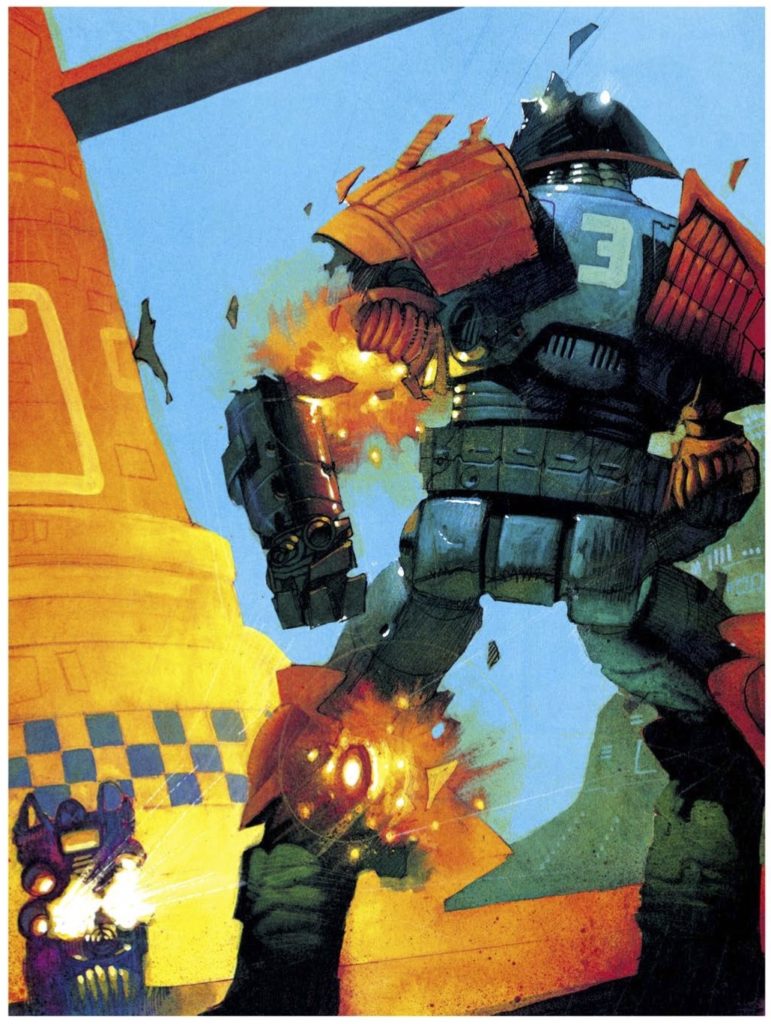 1:45:08-end: And then we really wrap things up by looking at what awaits us next episode — Grant Morrison, and it’s not good — and by mentioning the usual suspects: Twitter, Tumblr, Instagram and Patreon. Thank you as always for reading along and putting up with our meanderings, and I hope you’ll come back next month for an episode we’ll pretend is spookier than usual, because, you know, Hallowe’en and stuff.