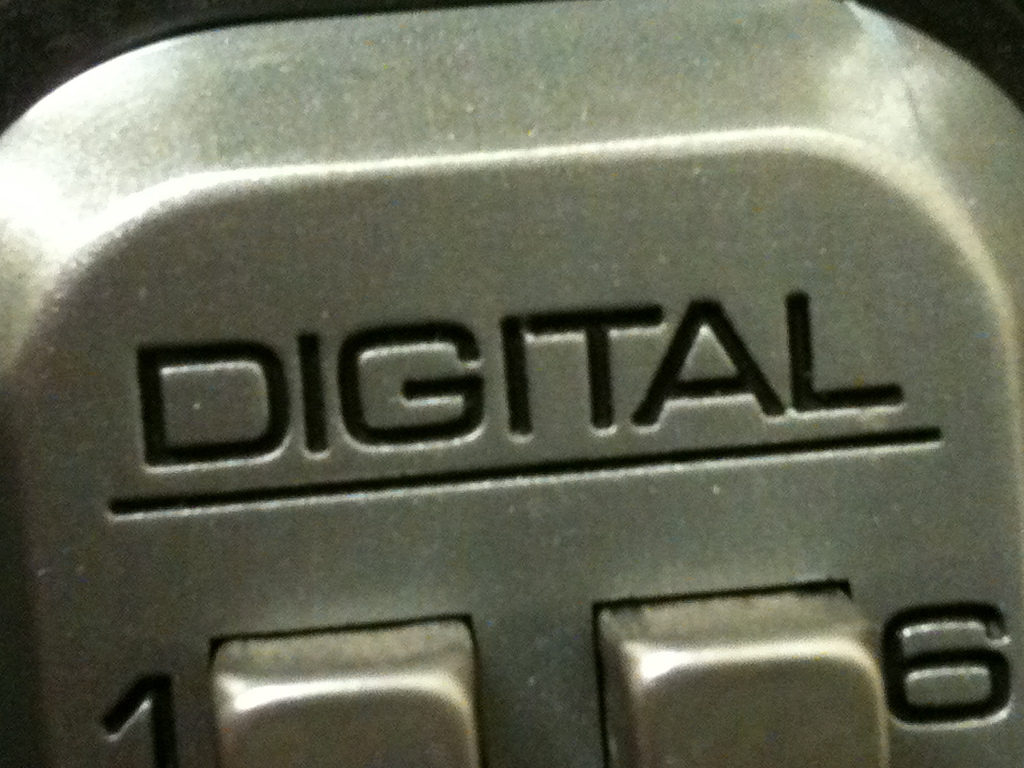 I’ve been struggling–and I do mean struggling–with a post about Snotgirl. It has been in development on my computer for months, and in draft on this site for weeks. Fortunately, the most recent episode of the podcast that brings y’all to this website touched on a totally separate topic for me to yap about, while Snotgirl continues to, um, coagulate in my head. [NOTE: Now THIS one has been languishing for days. Hopefully that is still the most recent podcast episode. Eeeesh!]

In response to one of your many questions, our fearless hosts (with Jeff leading the charge) discussed the plateauing and/or decline of digital comics sales. This news makes me sad, for two reasons: (1) Digital has become far and away my preferred platform, and; (2) I genuinely believe(d?) that digital offers the best chance to truly expand the reach of comics beyond the direct market.

So why has the growth plateaued? Well, I don’t actually know (as I’m not a trained industry analyst), but I certainly have a whole bunch of half-baked guesses that feel convincing to me (as I’m a human being on the internet). So let me share those theories with you, below! (And I’ll get that Snotgirl piece finished and posted soon–I swear it!)

1) Price. This is probably the biggest reason, and also probably the least-interesting. As discussed in the comments on that post, it feels somewhat odd to pay $3.99 for a 17 page comic book, for two reasons. First, when many other entertainment experiences on the same platform are not only priced lower, but provide better time value for your dollar. And second, because it’s the same price as for the physical print comic, which you actually own, while this is just for a weird existential rental of a book for as long as Comixology is around.

Further on that second point, if you’re buying a Marvel comic online, you’re paying the exact same price that you would also pay for the print comic INCLUDING the digital copy, which seems to pretty clearly establish how Marvel views the digital books: as a disposable add-in to the print comics experience. I assume they’re also doing this as a sop to retailers and the direct market, which is very kind of them but also creates a self-fulfilling prophecy whereby digital sales don’t overtake print because you’d have to have no interest whatsoever in print comics to buy Marvel digital-only … and my gut says that lots of comic readers (many of whom were borderline hoarders in the old days of print comics) are probably pretty apt to buy print-to-digital even if they just give the print editions away.

Because of regular sales (DC and Marvel each always have at least one digital sale running), the value point of digital comics is also much more flexible than print, and it tends to get mentally set at a much lower rate.

I think of this as the Moe’s Paradox, because I first noticed it affecting me when Moe’s was the only burrito place I had ready access to. Moe’s burritos (which, full disclosure, are not very good) generally cost something like $6.50, or more if you want a bunch of extra stuff jammed into them. On Mondays Moe’s offered a combo of burrito, drink, and chips for $5. (I think it was later raised to $5.99 but by then I lived nearer to better burrito places, if only slightly.) This was, obviously, a terrific deal, and brought a lot of people into Moe’s–there was regularly a line winding to the door on Mondays. But for me, at least, it also had the effect of making Moe’s ostensibly “regular” prices seem unreasonably high. The food wasn’t good enough to pay full price for Tuesday through Sunday when I knew perfectly well I could get it on the cheap on Monday. Every Monday, ALL the guys from my office went to Moe’s. Every Tuesday through Sunday, we ate literally anywhere else.

I’d be VERY curious to know what the buying patterns are like for sales of recent issues (which, admittedly, are more rare than sales on, say, the goddamned SIEGE event, which seems to go on sale every six weeks). I know that I am much more likely to try a book at 99 cents than at four bucks, both because it’s easier to say “Hey, that’s cheap, I’ll give it a shot,” and also because “Hey, the fact that that will eventually cost 99 cents makes four bucks seem totally inflated.” I wonder how widespread that is.

2) Unlimited. I’m on record as loving Marvel Unlimited, and I love it even more now that–thanks to the gap created by Secret Wars–what used to be new-to-Marvel-Unlimited now also means new-to-me. I’m finally living out my childhood dream of reading any new (Marvel) comic I want–I just have to be okay with my “new” being everyone else’s “six months old.”  (Which I totally am.)

But it MUST be cannibalizing the digital audience, because it takes the Moe’s Paradox to a whole new level. Counting Unlimited, there are THREE regular price points for Marvel books: full price (call it $4), sale price (call it $1), and Unlimited (call it free, because the monthly or annual fee is a sunk fund that isn’t affected by the number of books I read, and if I’ve got enough disposable cash to buy ANY comics, I have enough disposable cash to sign up for Unlimited).

Since getting fully aligned with the Unlimited release schedule, it has become almost impossible for me to justify paying full price for any Marvel digital comics. I’ll pick something up occasionally, mainly if one of my kids wants to read it, but for the most part that’s a non-starter for me. And even my purchases of digital comics at the sale price have decreased, because do I really need to “own” it (especially given how tenuous that ownership feels) if I can also read it whenever I want on Unlimited? I’ve got a few series that I still buy whenever sales roll around (the Jason Aaron Star Wars books, a couple of other things), but that’s just because I’m a completist and/or a moron.

I’d be curious to know how the subscription numbers for the Unlimited services (I’m talking about Marvel, because I’m not a Comixology Unlimited subscriber, but many of the same caveats probably apply) correlate to the numbers of digital sales–and even more curious to know how the number of Unlimited books accessed correlates to the number of digital sales. (That is, I for, example, am I not a new Marvel Unlimited subscriber, but I’ve started reading a LOT more books there, and my digital purchases have dipped correspondingly.)

3) In-App Purchases (or lack thereof). Possibly the best of the selling points for digital comics was convenience. You’re on the app, you see something interesting, or something that triggers your nostalgia-based dopamine receptors, or something you just plain want, and it’s two clicks and a fingerprint to buy it. The contemplation window is narrow, the ease of purchase is high, and it’s a perfect environment for impulse buying.

By removing the in-app purchases from the main Comixology app, Amazon added an extra step or two to the process, and for something as fundamentally useless and ephemeral as a digital comic, those extra steps are enough to dissuade any number of casual buyers. (Yes, I know the individual publisher apps still have in-app purchases, but those are the digital version of a mediocre direct-market comic book store, where Comixology is the digital version of…I dunno, an incrementally more varied comic book store?)

Combine that loss of convenience with the fact that removing in-app purchases means iTunes gift cards no longer buy comics, and you’ve further separated digital comics from most of the other digital trash that I buy on a given day–the on-sale-for-99-cents iBooks and the stupid endless runner games and the elaborate weather apps and ultrasonic mosquito deterrent apps and so on.

I’d be curious to see a graph charting digital sales via Comixology from the start through today–maybe I’m being Mattcentrically myopic, but I feel like there has to be notable dip when in-app purchases are yanked.

4) Search Functionality (or lack thereof). Jeff and Graeme covered this one pretty well in the episode, but it bears repeating: it is 2016. We all search massive computer databases for things all day, every day. It is PREPOSTEROUS that typing “justice league” into a Comixology search box turns up this incomprehensible and arbitrary assortment of things: 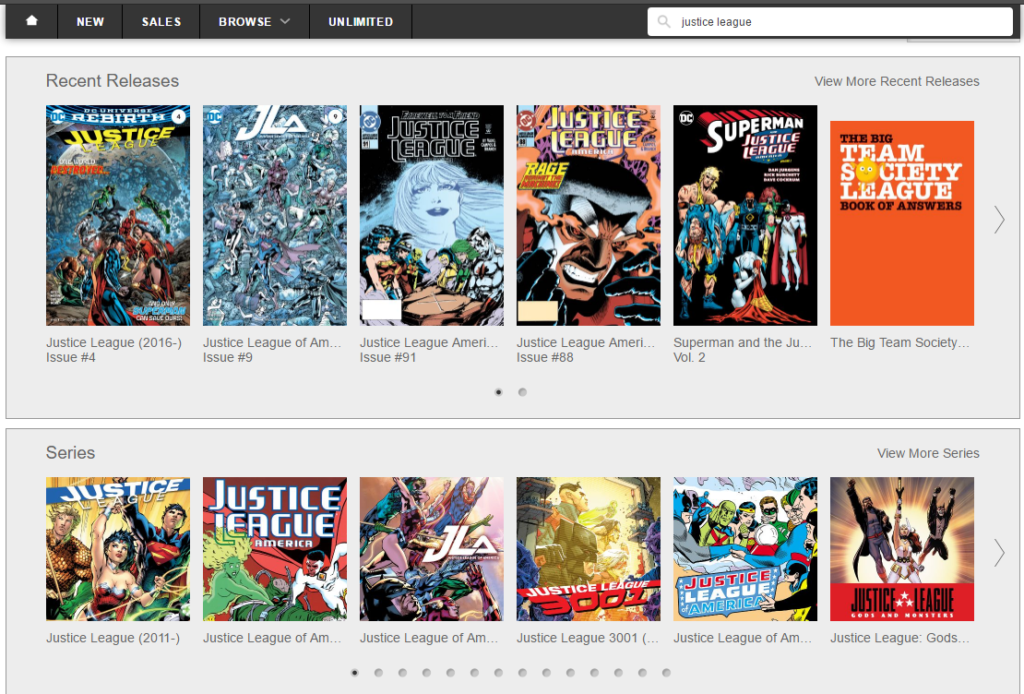 It is also pretty preposterous that the search function (unless there’s some hidden Advanced Search that I’ve never seen) doesn’t let me search by multiple subcategories at once–e.g., books with “justice league” in the title and “maguire” in the creator fields, or “dark horse” as publisher and “al ewing” as writer. This barely even qualifies as a Big Data problem, and it’s baffling to me that it hasn’t been addressed yet. (Which actually takes us back to item #2–Marvel Unlimited has improved by enormous stretches over the time I’ve been using it; it’s not perfect yet, but it’s much closer than it way, which makes me feel like the people working the app actually give a crap about my user experience. Comixology, with the best will in the world, has not shown the same improvement curve.)

This probably hasn’t diminished digital sales (or at least I can’t think of a way to measure its effect), but it almost certainly has stunted their growth–by definition, not being able to find what you want to buy is going to make you less likely to buy it.

5) Comics. So there’s that one other thing that digital advocates like me don’t always like to acknowledge: comics written for print very often don’t work on digital. The most obvious example is the double page spread, which in print is a pageturn into full widescreen kineticism–LOOK HOW BIG IT IS, MAN! It’s a huge windmilling power chord to the face! BRAAAAAAAANNNNNNNNNNGGGGGGGGGGG!!!!!!!

But in digital, with Guided View switched off (because seriously, screw Guided View), a double page spread is swiping to something much smaller, then realizing what you need to do, turning the ipad 90 degrees–and STILL having the page be much proportionally smaller than those around it. It’s like if your music builds and builds and builds…and then instead of hitting a crescendo, it hiccups for a second, then plays the same melody badly muffled, through a broken distortion pedal.

Digital is also pretty terrible at anything with long, complicated dialogue chains–I find Bendis’s work immensely readable in print, but much less so in digital. On the other hand, print is terrible at doing the moving panel transitions and rack focus tricks of the Infinite Comics format. But this are all specific nits to pick. On a broader level they’re indicative of the fact that putting print comics on a digital medium isn’t a simple 1:1 transition–from a creative perspective any more than a sales and marketing perspective.

11 comments on “He’s Nothing More Than Fiction: Matt Dreams In Digital”