Yes, it’s practically Christmas, almost the end of the year, and although I’m pretty set as far as Christmas shopping goes, I’m finding myself distracted enough by the holiday parties and the family get-togethers and the slightly increased work pressures at the day job (traditionally, the amount of work goes down but so do the number of co-workers as those with seniority take weeks off at the end of the year—it’s kind of like those lab experiments where you can get water to boil at room temperature) that I can’t really string together a strong eleven hundred word post.  Well, most of mine usually crack two thousand because I can’t just get to the point but I can’t even make a mouthy post these days.

But since I’ve got a dozen little bits bopping around in my brain, thanks to the miracle of caffeine.  How about I try this:

ITEM! Speaking of the Bullpen Bulletins, one of the many things that’s gotten short-shrift over our 300 issue Avengers read-through are the Bullpen Bulletins and letter pages.  I didn’t have much patience with the early Bulletins, the ones written by Stan Lee when he was in the process of perfecting his transformation into Stan “The Man” Lee because the type was too damn small and grainy, but I did read a ton of the pages from the ’70s when (of course) I was growing up and reading them obsessively.  Although they’re fun reads for me, filled with both crazy in-jokey nonsense and earnest notations of marriages, births, and cross-country moves (all while, in his pee-yellow Soapbox, Stan shills the hell out of every media appearance and book contract he makes), I think the Shooter-era bullpen pages are the more interesting and accomplished pages.

Of the various innovations Shooter brought to Marvel,  I think one his smartest was the way he eschewed mimicking the pseudo-Stan-ese but kept and heightened the underlying air of candor to Stan’s writing.  Shooter spent a lot of columns describing what it was like to work at Marvel Comics (probably the number one question fans had at cons back then) and how comic book production worked, while at the same time subliminally shaping the reader’s expectations of what Marvel Comics under Shooter were like.

As his Bullpen pages moved from Stan Lee hyperbole to straight-from-the-hip earnestness, so too did the books  of the era move from melodramatic captions to more explicative stuff.  And whereas the earlier Bullpen pages featured the comings and goings of creative talent, a lot of Shooter’s pages focus on introducing us to the Editors and Assistant Editors. Admittedly in both eras, talent worked both sides of the desk, but in the pages of the ’70s they were identified as creators first and foremost, whereas in Shooter’s era they were Editors first, their freelancing credits tucked in between descriptions of their favorite movies and who their classmates in High School thought they were.

On the one hand, it’s the same end-run around nerdishness you see happening in comics and the comics Internet today, the insistence that, yes, the people who create comics—who create good comics—are regular people, quietly doing their jobs as best as they can just like everybody else. It feels sensibly progressive.  And on the other, it was part of the same paradigm shift that was happening in movies at the time, shifting attention to the producers as the generators of product (it seemed like there was a period in the ’80s where 90% of all entertainment magazines were about Bruckheimer and Simpson as the men with vision, and guys like Tony Scott and Jim Cash & Jack Epps, Jr. were only executors of that vision). That feels like sensibly progressive to me:  Shooter’s Marvel would become a place where editors were the true creative talent, their ultimate creation would be the line-wide crossover, and that’s the way the Big Two have operated to greater and lesser extents ever since.

ITEM! Among other amazing items, the McMillans got Edi and me this amazingly delicious Dark Chocolate Rocky Road Santa Claus from Moonstruck Chocolate Co.: 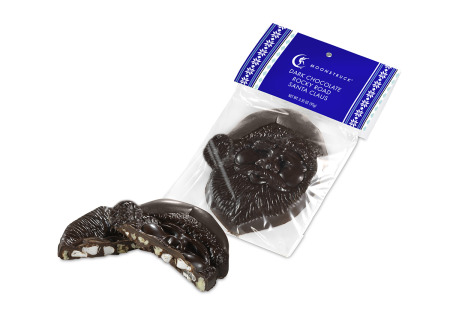 See that bit where Santa’s head has been cloven in twain and you can see the disquietingly bone-like masses of delicious marshmallow? If you remove one of those halves—as if some monstrous oaf could not stop himself from indulging while watching the penultimate episode of Broadchurch—that’s more or less how our Santa looks now. More or less.

ITEM! Slow to catch this train, but I think it’s interesting how when the Japanese economy crashed and burned, the film result was J-Horror, with people being haunted and killed by ghostly children, the guilt of an older generation having failed the younger.  But when the American economy took a hit, the film results were movies like Taken where elderly badasses deal with threats to their family (often brought on in retaliation to their past actions) by being even more violent badasses than previously.  It’s not our fault 40% of the world’s wealth was evaporated! It’s the terrorists’ fault! Try and remove my child from her pricey hotel room and I will end you!!

I don’t know if the ’70s cinema really is that much better than other eras, but I have to say its concept of shame certainly resonates more deeply with me than Sean Penn as Gun-Fu Grandpa, or whatever.

ITEM!  If you’re a Patreon supporter at the Digital Grab Bag level, I have plans for you in 2015.  Maybe not until month three or four of 2015?  But still, big plans.

ITEM! I can be a little free and easy with my cash (despite what my continual measuring of comics’ enjoyment by what I paid for them) but I’m actually weirdly scrupulous about tracking my digital purchases—in no small part because it got too easy for me to keep spending and spending and spending since the purchases were tucked neatly out of sight on the digital shelf.

Anyway, all of which is to say:  since it’s the end of the year, I’ve been looking over my digital purchases and some patterns are becoming painfully evident:  for one thing, I sure like buying books and comics digitally.  For another, I don’t read books and comics nearly as much as I buy them.  I’m months behind on my digital subscriptions to 2000 A.D. and Megazine (actually, I’m just an issue behind on Megazine but like six months behind on the pack-in collections), I’m nearly a full year behind my Shonen Jump Alpha subscription, and I can probably spend the next two years reading the books I’ve bought off Amazon and not want for a title to read in practically every genre.  All signals point to me taking a break from buying and maybe spending a lot more time on reading?  (Of course, reading takes more time than buying which may be part of why I do so much more of the latter than the former.)

Interestingly, there are a few things that stand out when I look over my crazed hoarder spreadsheets:  (1) I read far more of my digital comics purchases than I do my digital book purchases; (2) My reading-to-purchasing ratio of digital comics has gone up since we took Wait, What? to its own website and got Patreon backing; (3) Of the digital comics I tend to read, it’s far more likely to be a comic I’ve already bought and read in print than a new title or issue, with the exception of (4) the few digital-first books I subscribe to (Batmanga, Sensation Comics) which I tend to stay current on.

I think there are really clear explanations for each of these: (1) digital comics are faster reads than digital books and time is at a premium in my Old Man Grumpus days; (2) Because of the new site and Patreon backing, I produce much more content for this website than I did the last couple of years at the Savage Critic, so I’m always looking for new material to write and talk about and it’s easy to reach for the iPad; (3) Rereading a comic makes it more likely I’ll find something to write or talk about, as opposed to reading a new comic; and (4) the digital-first books I subscribe to  are books I either love or have a very strong interest in, but they are almost always faster reads than regular comics.

So, yeah. I’m trying to set some goals for the coming year, and this is the stuff I think about, the battle in my brain over all the Shoulds:  I should spend more time reading new comics, rather than rereading old comics. I should spend less money buying comics and more time reading what I’ve already purchased. I should keep my subscription to Batmanga because I really like it—no wait, I should drop my subscription to Batmanga because I’m spending more money on it now than if I get it later—oh shit, I don’t know.

Anyway, I’m still figuring out what to do about it even though I suspect what I should do is spend less time worrying about it and more time reading comics.

ITEM! Speaking of digital comics, there are some crazily good digital sales over on Comixology at the moment: Top Shelf has a bundles sale that ends on 12/22 and Fantagraphics has a “Leading Ladies” sale that ends on 12/21, DC just started an Essential Graphic Novel Sale, Viz has some Winter Sale with a ton of great material (I’m pissed that Viz won’t sell Drifting Classroom on either its app or Comixology but I’m still tempted to pick up all those Dr. Slump volumes), IDW has a great intro sale, so does Monkeybrain, and Marvel does that weird thing they do where they dangle the first volumes of All-New X-Men and Deadpool: Secret Invasions for a super-low price all month, confident that people will buy them sooner or later (maybe they’re right).

In short, there’s never been a better time to screw over loved ones and spend your money on yourself.  As long as I’m telling you what to do, let me tell you how to do it and point out:

ITEM! That’s it for now.  Graeme and I still haven’t worked out what we’re doing for podcasting during the holidays but we will update you when we know. If you are the Christmas-having sort, Merry Christmas!  And if you are not, we hope you get a day off or two out of the deal and that they are good ones!