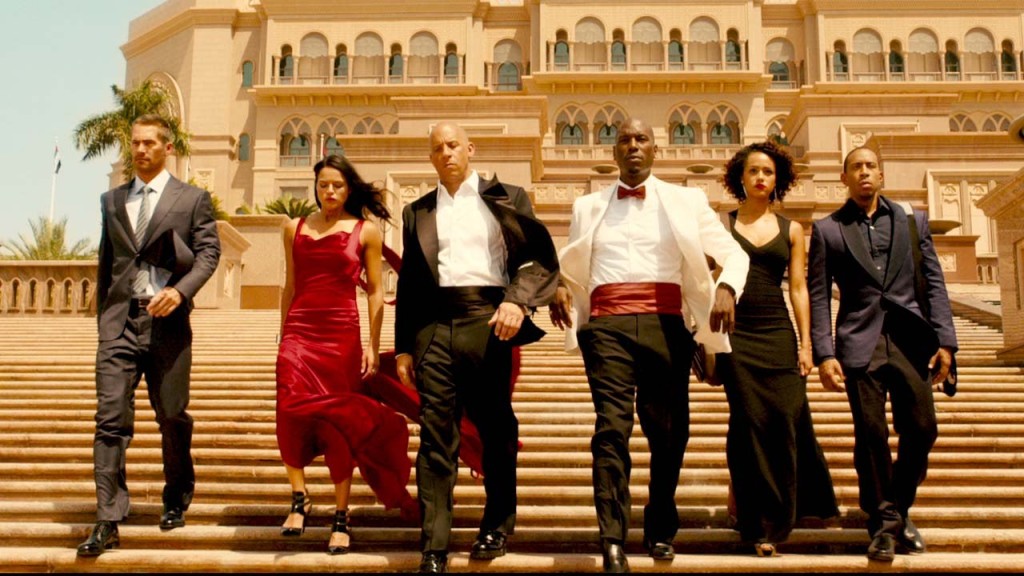 Hey, everyone.  Thanks to last week’s quest to read every issue of Hickman’s Avengers, New Avengers, and Infinity on Marvel Unlimited, my bench of comics is not especially deep.   As much as I enjoy the opportunities for binge-reading now afforded me by all-you-can-read services like Crunchyroll and Marvel Unlimited, it can trip up my ability to both talk about stuff on the podcast and write about stuff here.

(Reviews and whingeing—behind the jump!)I thought about using this post as a supplement to the stuff I said on the podcast —which should be up within 24 hours of this post—about Hickman’s current Marvel work, but apparently one of the survival mechanisms my shaky self-esteeem has developed to survive braying my opinions all over the Internet is an inability to remember what exactly I’ve said. So I apologize if the capsule reviews I’m presenting here instead are of stuff that’s a bit old or pecked over, less like reviews than bits of driftwood washed up on the beach:  I’d like to pretend that you wouldn’t be able to tell if I hadn’t mentioned it, but I suspect you’d catch on by pretty much my first review: 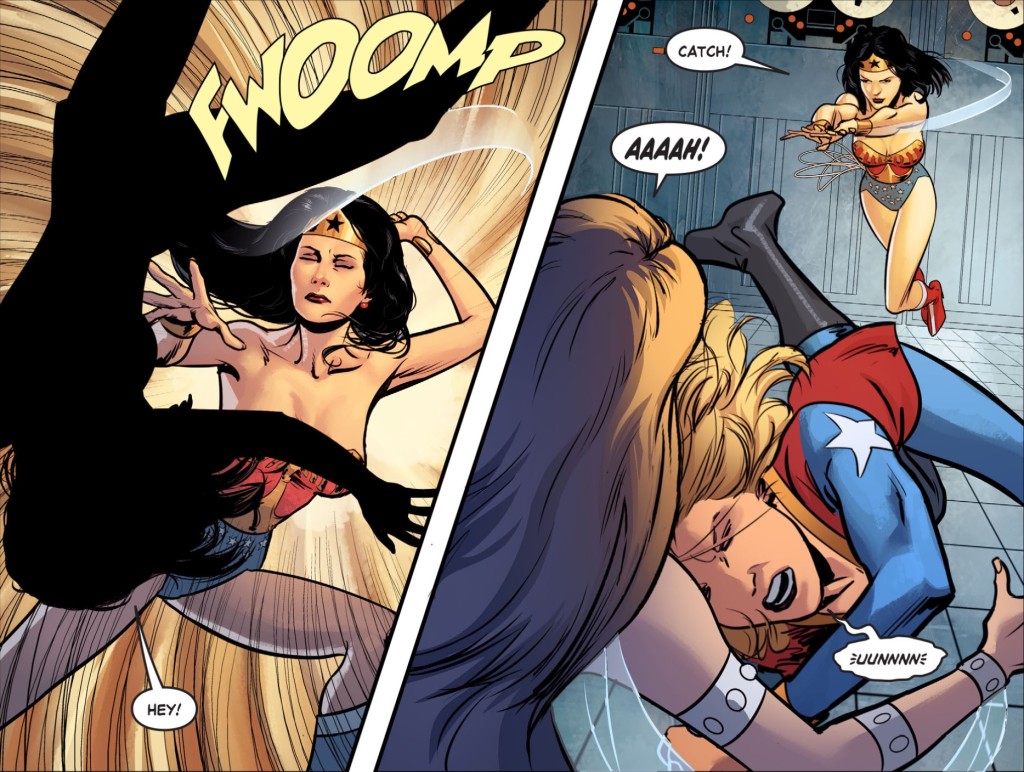 WONDER WOMAN ’77 #6:  Hoo boy.  Last week, I said complimentary things about the second arc of this title, especially the nicely photorealistic art by Jason Badower.  This week, I got the concluding issue of this arc and immediately went, “hold on, this art isn’t Jason Badower’s.”  Sure enough, they swapped him out with Matt Haley and Richard Ortiz, the guys who jumped in and finished the art in this book’s first arc.  Even worse—as far as the potential damage to my credibility is concerned—that swap happened in issue #5 without me noticing it.

And so, while I admit a certain amount of my frustration clearly stems from embarrassment, I have to ask: who puts out comics this way?  Wonder Woman ’77 isn’t a Marvel launch title, for Christ’s sake: these seven weekly issues add up to two comic books worth of material, and the project was announced something like six months ago!  How can you put out two comic books and end up swapping out your art team a third of the way through on each issue?  Who are you?  Huh?  I demand to know who you are!  (And yes, writing that did make me feel like this, I admit it.)

I mean, the art is actually effective, considering the “Wonder Woman faces all of her enemies but really they’re just mental illusions” trope was old back when they did it in Amazing Spider-Man #150 or whatever, but Haley and Ortiz aren’t stumbling through an action scene, they can almost hit a pleasingly full cartooniness, a la Amanda Conner.

But while swapping artists in between chapters might work with forgetful old men reading digitally, I can’t see how a flip test of the printed product wouldn’t make it look like a Frankensteinish mess.  I can’t imagine this book is on the marketplace without being a labor of love of at least a few people….so why can it barely come up to the lower standards of Big Two superhero books and at least look consistent?

Sadly, the answer to that is probably that the lower standards of the Big Two books no longer include having a book look consistent.  It frustrates me because there are so many indications—most especially the reportedly high digital sales of books like Ms. Marvel and Lumberjanes—that there is an audience for this book. It’s just hard to imagine that audience being satisfied by it, even if they find it.

DAREDEVIL: THE TV SHOW (eps. 1-4):  Proof that I am the worst binge-watcher ever: in the past week, I’ve only made it through four episodes, with two of those happening just last night.  By the time I’ve watched the whole thing, AKA Jessica Jones will probably be out.

Based on what I’ve seen so far, Sony and Marvel were right to get into a minor tug of war over Drew Goddard. I found the first two episodes, written by Goddard, extremely satisfying in ways the second two episodes weren’t, despite all four being consistent and of a piece.  There are lots of reasons why that could be the case—different directors (Goddard may have full writing credit for the first two episodes, but both eps also have the same director, Phil Abraham, who also has fourteen episodes of Mad Men under his belt), different rehearsal time, different budgets—but it feels like it might be a writer thing to me?  All the episodes have longish scenes of characters talking, but only in the first two do any of those scenes bristle with subtext, where what people aren’t saying is as much a motivator as what is.

It’s not just that Charlie Cox acts the shit out of the opening scene of Matt Murdock in confession, it’s that the actor has something to actually act with, his gentle voice and physically taut composure indicating how much anger and shame are running through his memories of his childhood. By contrast, scenes in the later episodes just felt draggy, even when they also pivoted around things going unsaid and even when the subtext was no less obvious. In theory, Wilson Fisk being physically uncomfortable around a woman he’s interested in should be more a surprise than Matt being angry about his childhood?  But even with Vincent D’Onofrio pushing most of his choices further than I would’ve expected, the scenes just didn’t seem to go anywhere after that.

But…yeah.  Those first two episodes hooked me enough to keep me on board…even though my definition of “on board” means I’ll probably be watching the last episode sometime in December. 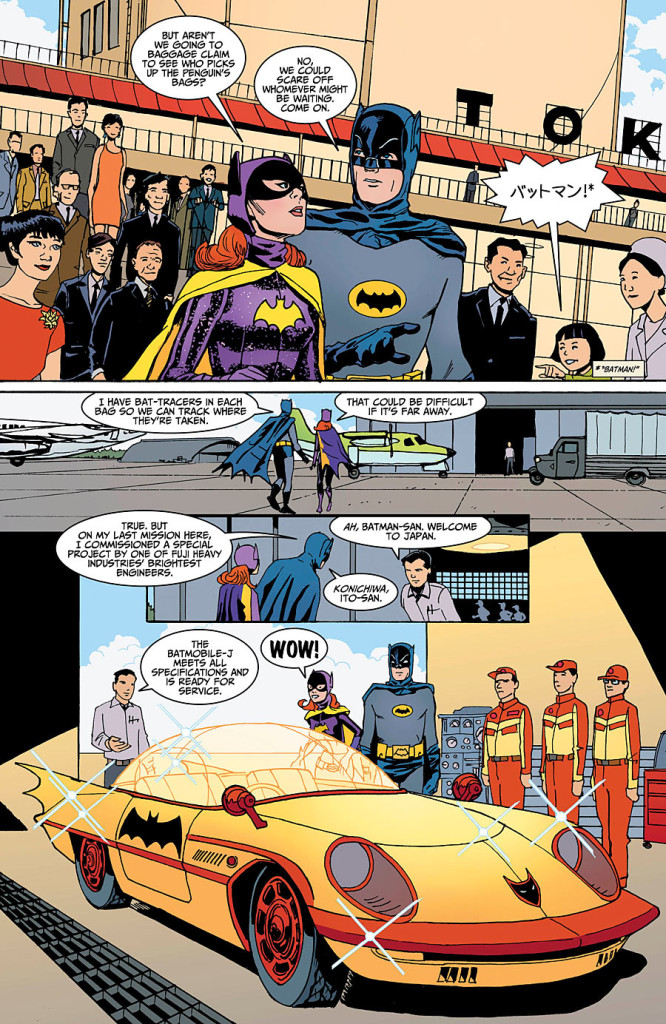 BATMAN ’66 #20 & 21 (print editions):  Rob Williams, who has done a lot of exceptional work for 2000 AD, does a similarly bang-up job here.  Like my favorite issues of this title, the story of The Joker deciding to become Jokerman, a surprisingly effective superhero, works equally well as an unlimited budget imagining of the Adam West show and a modern take on Silver Age storytelling:  while the dialogue catches the rhythm of the show, all the story beats feel like something Bill Finger himself would put into play.  I was kind of hoping for a few more Bob Dylan jokes?  But I have to admit, I’m pretty clueless about Dylan’s Christian phase so maybe they’re just in there and I missed ’em.

As for issue #21, Jeff Parker returns to take Batman and Batgirl to Japan for an encounter with Lord Death Man, and like a lot of Parker’s work on this title, it’s a pretty seamless concoction of tongue-in-cheek tribute and fond pastiche, working in not only the faux nihilism of Lord Death Man’s appearance in the Jiro Kuwata Batmanga but also a Japanese Batmobile to warm the heart of any Speed Racer fan.  While I honestly can’t remember any of Ruben Procopio’s art in issue #20, frequent Parker collaborator Sandy Jarrell brings a cleaner line and more dynamic eye for layouts to make this issue visually compelling.  Although the longer I look at it, the more I feel like the real star of the story is Jordie Bellaire’s coloring? Like she uses peach in a way that’s really awesome?

Either way, although I can’t deny these books are pretty flyweight entertainment, I found them pretty delightful.  If you have the itch of nostalgia, they can scratch that pretty damn well.

FURIOUS SEVEN: I’d been looking forward to this—with reservations—so I caught in the theater and enjoyed it…with reservations.  I knew the chances of it being as good as either Fast Five or Furious Six were mighty slim since Justin Lin wasn’t going to be in the director chair, but the abundance of awesome guest star talent (Statham! Russell! Jaa!) kept me hopeful everyone still on-board had a good sense of what makes the franchise so god-damned delightful. I mean, Chris Morgan has written five of these things and in three years of writing and talking about these films, I haven’t mentioned him once!

[Sidebar: Maybe it’s just me, but I feel like a lot of the writing about big movie franchises talk a lot about the importance of the director—almost too an auteur-like level—for projects that, like any big money making project, are tended and shaped by many hands, producers most of all.  I wonder if this is because Star Wars, the biggest movie franchise of all, was talked about right out of the gate as George Lucas’s singular vision, or if studios learned that part of the success to 1989’s Batman was marketing that movie like it was largely the product of Tim Burton.  It seems like it’s a preemptive counterbalance, a way to keep corporate properties from being perceived as corporate properties.]

All of which is to say I wonder if Furious Seven would’ve remained such a relatively dour affair under Lin.  As it is, it’s a little disconcerting that our group of heroes are less diverse and  markedly less gender balanced in this movie than in the previous two: the biggest installment of the franchise seems the smallest, with lots of scenes of Vin Diesel and Michelle Rodriguez growling their way through a romantic subplot like an all-pitbull version of Romeo & Juliet, and very few scenes of anyone doing anything else, except updating one another about their status via mouth-text as they wait for the next action scene to start.  And while Russell, Statham, and Jaa are each presented with some potential—Kurt Russell here is going to be as close to an old-school Nick Fury as we’re ever going to get on film—they aren’t given anything like a Dwayne-Johnson-in-Fast-Five showcase; it’s more of a Gina-Carrano-in-Furious-Six affair, just with a little added screen time.

Grouse, grouse, grouse…and yet, as I said, I enjoyed it?  The action setpieces gave me enough of what I wanted, and although the movie montages too quickly through the initial shot of our crew suited up on the steps of Abu Dhabi, that image made me feel this franchise hasn’t yet lost touch with what feels necessary about it, its adaptation of all the best principles of the American Dream: namely, the idea that if you’re competent and you have money (and you can drive), there are no limits on what you can do.

5 comments on “Too Much of a Good Thing: More Capsule Reviews from Jeff”